University and student leaders stress the importance of steps to foster diversity and inclusion.
February 9, 2018 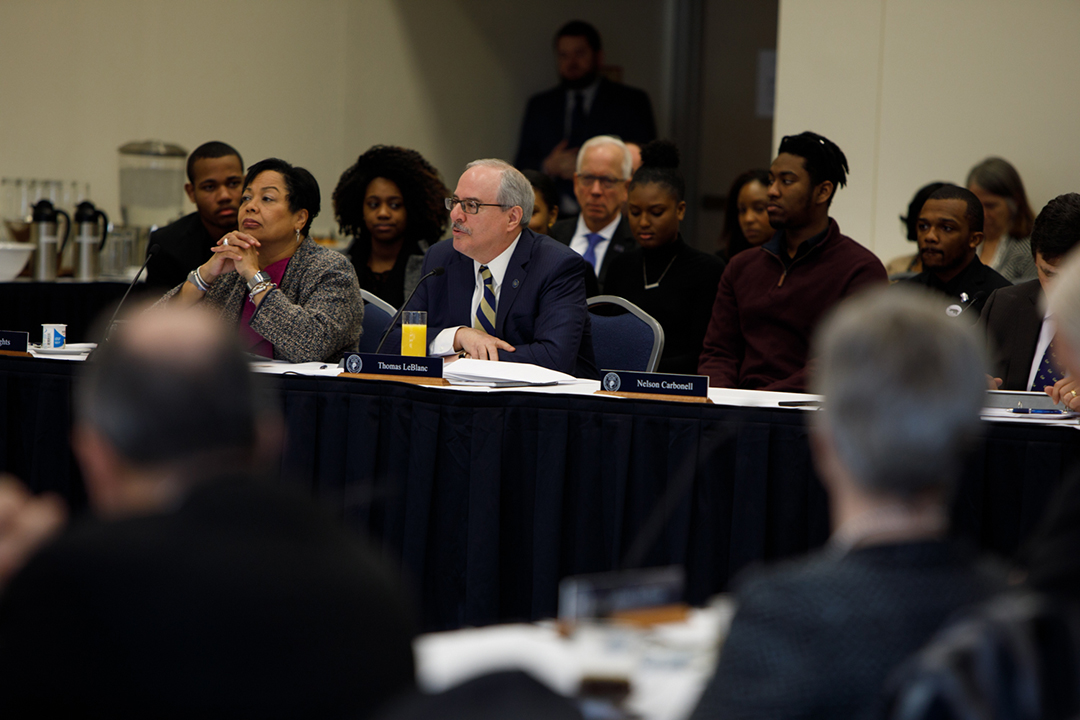 GW President Thomas LeBlanc provides an update to the Board of Trustees on Friday. Dr. LeBlanc said the GW community has a lot of work to do "to build the university we aspire to be." (William Atkins/GW Today)

The list of actions the university will take in response to an offensive social media post that recently circulated online is “a good start—but it is just a start,” President Thomas LeBlanc told members of the Board of Trustees during its regular meeting on Friday.

Describing the post as “absolutely unacceptable,” Dr. LeBlanc said it also led to discussions about “far deeper concerns” about race relations and inclusion on campus.

“We still have a lot of work to do together to build the university that we aspire to be,” he said, later adding, “As we move forward, our entire university community must be committed to being an active part of our discussions and the changes we will make.”

Students will continue to be focused on these issues, said Student Association President Peak Sen Chua, who read a statement on behalf of student leaders of the university’s black community, who attended the meeting. The statement emphasized the importance of continuing to confront racism and bias on campus and work with students on improving inclusion.

Also during his remarks, Dr. LeBlanc said the university is making strides on each of its five strategic initiatives.

Changes surrounding the undergraduate student experience have been particularly important, and recent improvements for students include enhancements to dining plans, a new online transcript request form and the elimination of the opt-out model for the library gift.

With respect to research, in addition to restoring funding for the University Facilitating Fund, Provost Forrest Maltzman and Vice President for Research Leo Chalupa will be working with the Faculty Senate’s Committee on Research to develop action items and metrics to advance student and faculty research.

“We want to create a best-in-class organization that can help the university reach its philanthropic goals,” Dr. LeBlanc said.

Meanwhile, GW officials have been meeting regularly with partners at the Medical Faculty Associates and GW Hospital/Universal Health Services. Discussions include a new affiliation agreement between the MFA and GW as well as plans for growing the clinical enterprise among the partners in effort to achieve preeminence in medicine and health care.

Finally, institutional culture improvements have included announcing a longer winter break for staff as an enhancement to benefits offerings and working on implementing a comprehensive orientation and onboarding program for new employees. The university also will determine a culture assessment strategy that can be used as a baseline for continued improvements.

In the coming weeks and months, university leadership, including deans, will provide input on the initiatives, and GW will launch a website to provide more ways for the university community to be engaged, give feedback and track progress, Dr. LeBlanc said.

In other board news:

During his remarks, Board of Trustees Chair Nelson Carbonell Jr., B.S. ’85, said he especially enjoyed the previous evening’s dinner, which brought together more than 80 faculty and members of the board.

“For me, it’s really gratifying to see us come together as a community, to be together with the faculty, see what their work is, have conversations with them,” Mr. Carbonell said. “It was a terrific dinner.”

Mr. Carbonell also emphasized the importance of the GW community working together to create an inclusive environment.

“That work is not done. It will never be done,” he said.