The pioneering GW alumna and athlete headlined the Commencement ceremony for the Class of 2022 on the National Mall.
May 15, 2022 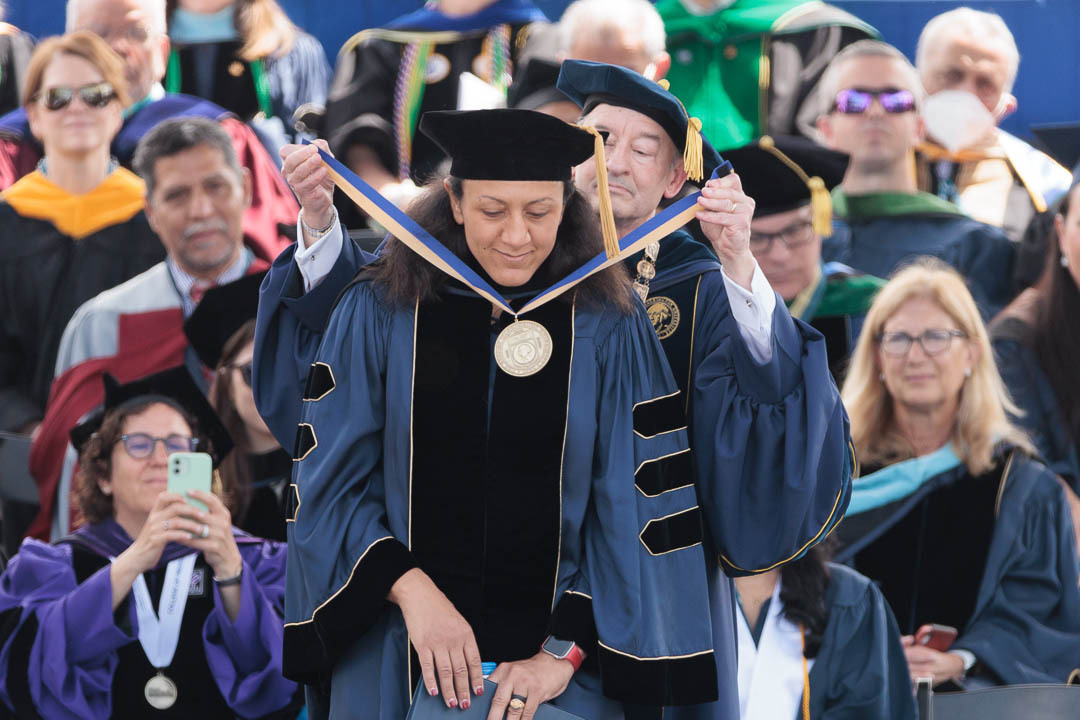 Olympic bobsled champion and George Washington University Athletic Hall of Famer Elana Meyers Taylor, B.S. ’06, M.T.A. ’11, HON ’18, drew on her own triumphs over adversity, failure and discrimination along her path to becoming the most decorated Black athlete in Winter Olympics history during her address to the Class of 2022 on Sunday on the National Mall.

Lifting the two medals she won at the 2022 Olympic Games in Beijing, China—bringing her career total to five—Meyers Taylor inspired the estimated 31,000 graduates and guests to prevail over future challenges with a “recipe of resilience, of the ability to get back up, dust yourself off and find another way.” Meyers Taylor called the field of graduates  “already among the most resilient people in the history of education” as she encouraged them to “create your own medal-worthy moments.”

Meyers Taylor headlined the first in-person GW Commencement held in its traditional time slot at the end of the academic year since 2019. GW is the only university that holds its graduation ceremony on the National Mall, but the tradition was interrupted by the COVID-19 pandemic. Ceremonies for the Classes of 2020 and 2021 were moved online before a joint in-person Commencement was held on the Mall in October 2021.

A pioneer for women in sports, Meyers Taylor, who earned a master’s in sports management in 2011 and a B.S. in exercise science in 2006, was the GW softball program’s first recruit. She graduated as the team’s all-time leader in nearly every offensive category, and her No. 24 jersey was retired in 2014. Among her numerous personal and professional accolades, Meyers Taylor was selected as one of the university’s Monumental Alumni as part of GW’s bicentennial celebration last year.

But in her remarks, Meyers Taylor stressed that her setbacks were as important in defining her character as her many victories. She framed her address around three stories of adversity that she said played a role in her journey to the podium.

“The first is about failure,” she said as she recounted her crushing disappointment over not making the U.S. Olympic softball team in 2008  after what she described as “the worst tryout in the history of tryouts.” Instead of giving up on her Olympic dreams, however, she switched course, devoting her energy to becoming a champion bobsledder.

“Had I not failed on that day, it’s a virtual certainty that this girl who was born in California, raised and still lives in Atlanta, would have never found the inside of a bobsled,” she said, adding that graduates may find failing at a goal to be “the best thing that ever happens to you.”

Her second story—a tale of “women drivers and Taylor Swift,” she said—recalled her campaign to allow women to compete in the four-man bobsled event. After successfully fighting to change her sport’s rules, Meyers Taylor said she faced taunts and abuse on race days. “I heard some of the most vile, racist and sexist comments you can ever imagine,” she said. She blocked out the insults by blasting Taylor Swift’s empowerment song “Shake It Off” over her headphones as she approached each starting line—becoming the first American woman to make the U.S. men’s national team.

“Haters gonna hate,” she told graduates. “You may face racism, sexism or countless other permutations of ignorance. When that happens, listen to Taylor, shake it off and choose to drive down whatever path inspires you.”

Her last story involved “acceptance and control,” as she described testing positive for COVID-19 just days after arriving in Beijing last winter and facing the prospect of her Olympic hopes shattering so close to the finish line. Isolated from her team and her infant son, Meyers Taylor was determined to control her situation. She turned her hotel room into a makeshift gym and threw herself into rigorous physical training, eventually winning a silver and bronze medal at the games.

“There will be times in your life when it seems like everything is out of control, but that is never truly the case,” she told graduates. “There are often times when you cannot control what happens to you, but you always get to choose how you react to whatever comes your way.”

Before opening the ceremony, Provost Christopher Alan Bracey acknowledged the mass shooting in Buffalo, N.Y., on Saturday, which left 10 people dead and three injured, most of them Black. “We must condemn such hate and violence publicly and forcefully, and we must actively work to fight the racism that many experience, particularly members of our African American community,” Bracey said before leading the ceremony in a moment of silence.

Earlier in the day, GW President Mark S. Wrighton condemned the racial violence and offered condolences in a message of support to the GW community.

Bracey then welcomed graduates and family members and noted the contributions of alumni and donors who funded scholarship opportunities. Stressing the transformational power of education, he encouraged graduates to join a legacy of GW scholars who harnessed their knowledge and passion into fighting for societal change. He emphasized that the graduates were inheriting a responsibility to “continue stepping up when facing the world’s difficult challenges.

“I know the fire in you will never go out,” he said. “You must continue to let that fire fuel you into action as a transformative change agent determined to make society better for the public good.”

Board of Trustees Chair Grace Speights, J.D. ’82, also expressed confidence that the graduates would emerge as leaders in their career paths, destined to exert a positive influence on the world. At the same time, she stressed that they will always be supported by a robust GW community.

“Please remember that you are not alone in this journey. You have the support of your mentors, your friends, your families and, of course, our alumni community and the George Washington University Alumni Association,” she said. “The road to accomplishment is unique for everyone, but it is not unique for GW to be part of the journey for so many.”

In her remarks, Christine Brown-Quinn, M.B.A. ’92, president of the GW Alumni Association, welcomed graduates to a community of more than 310,000 alumni from around the world. She recognized the extraordinary accomplishments of GW alumni—from business leaders founding unicorn companies to NASA astronauts exploring the frontiers of space—and assured graduates that they too had the potential to make lasting impacts. 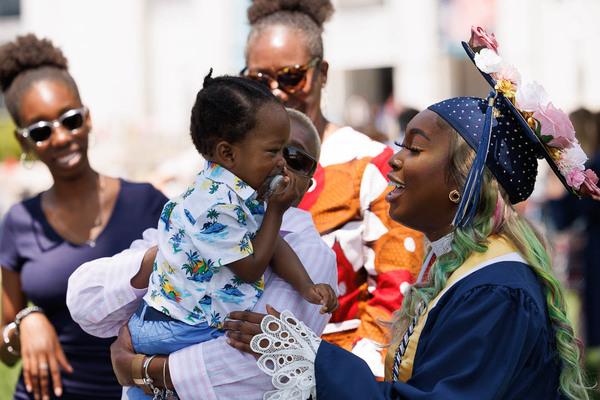 “Your purpose will unfold as your life unfolds, and your GW degree will not only serve as a stepping stone but also as a foundation and resource to leverage throughout your career,” Brown-Quinn said.

Brown-Quinn also introduced Class of 2022 student speaker Vishva Bhatt, who earned a B.A. in international affairs with a concentration in security policy and environmental studies and a minor in Arabic.

She praised her fellow GW students for uniting in their passion to make a difference in the world. “At GW, we may not have a football team, but we are all bound together by the values of the buff and blue: A shared vision to do good—to be the good,” she said.

Wrighton stepped to the podium to confer honorary degrees to CNN anchor and chief political correspondent Dana Bash, B.A. ’93, and Chuck Todd, ATT ’90 to ’94, the moderator of NBC News’ Meet the Press.

Two graduates—Lia Isabel DeGroot, who earned a B.A. in journalism and mass communication with a minor in political science; and Daniel Niewoehner, who received a B.A. in political communication—assisted Wrighton in presenting the honorary Doctors of Public Service to Bash and Todd, both of whom joined Meyers Taylor as GW Monumental Alumni.

In her remarks, Bash, who has covered elections and Congress and served as a White House correspondent, noted the value of understanding different perspectives and viewpoints. She said a crucial part of her career has been traveling throughout the country—from farms and rural towns to big cities—and listening to people with a range of life experiences. She implored graduates to break through political polarization by “opening up your mind and your heart to people and places you aren’t familiar with.

“There is a whole world out there for each of you,” she said. “Take advantage of it, be excited about it and take risks.”

Todd, who spearheads NBC News’ political coverage, credited much of his personal success to coming to GW—“the single most important decision I ever made.” Studying in Washington, D.C.,  he said, allowed a “wannabe 19-year-old political junkie” to immerse himself in the political landscape.

Noting current national crises from threats to democracy to eroding trust in institutions, Todd said he was nevertheless convinced that GW graduates would lead the country “out of this darkness” to become the next “greatest generation” and provide badly needed new leadership and new ways of thinking.

“You need to take on this challenge,” he said. “To paraphrase someone who was very influential to me, Princess Leia: Help us, Class of 2022, you’re our only hope!”

Wrighton awarded the GW President’s Medal, the highest honor the university’s president can bestow, to Meyers Taylor, who previously received an honorary Doctor of Public Service during the 2018 GW Commencement ceremony. Wrighton was assisted by graduate Shreenithi Venkataraman, who received a B.S. in public health and a minor in women’s, gender and sexuality studies.

Earlier in the program, Bracey presented the George Washington Award—which recognizes  extraordinary contributions to the GW community by students, faculty and staff—to Alma Stark, the assistant director of post-award management in the Office of Sponsored Projects. Bracey praised Stark for implementing a modernized research administration web-based platform to enhance the work of faculty, students and staff and enable the university to grow as a research institution

Stark was also among the day’s graduates, earning a Master of Business Administration degree.

Later, the proud moment for the Class of 2022 finally arrived. Friends and family looked on as the graduates received their degrees. In his charge, Wrighton complemented the graduates as “an exceptional group of motivated, bright individuals” and congratulated them on their intellectual achievements and their resilience in the face of challenges like the COVID-19 pandemic.

He urged graduates to devote themselves to a lifetime of learning and to seek out diverse experiences while pursuing a life of meaning and purpose. 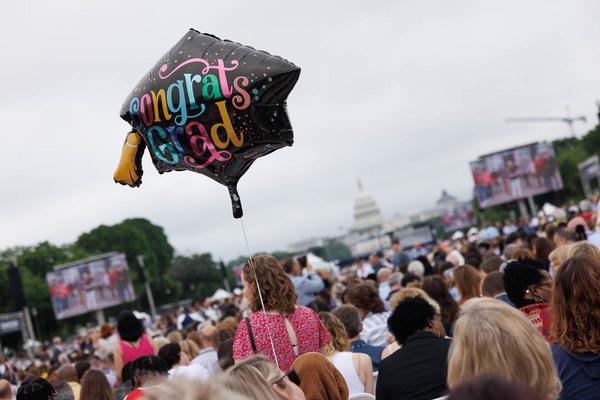 “At the George Washington University, you received an education designed to prepare you as leaders. Now, you are those leaders, equipped with knowledge, skills and resources to help solve the world’s most pressing challenges, both today and tomorrow,” Wrighton said.

“Every member of the Class of 2022 can use what you have learned at the George Washington University to uplift communities and serve the public good.” 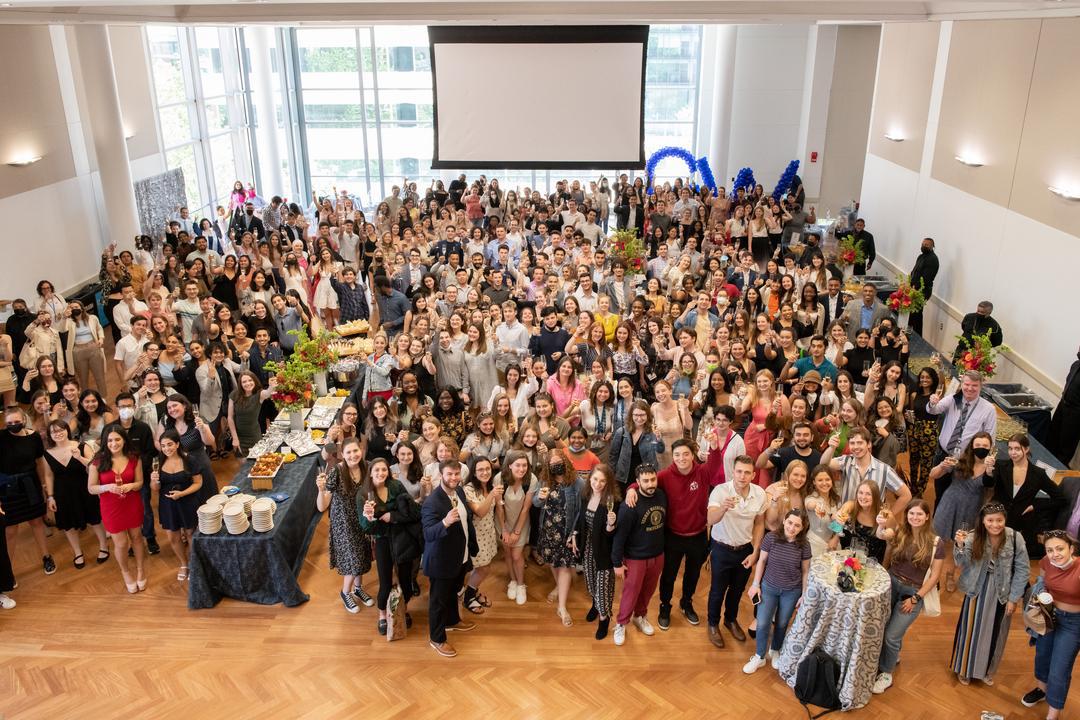 Graduates: What and Who They’ll Remember Most about GW