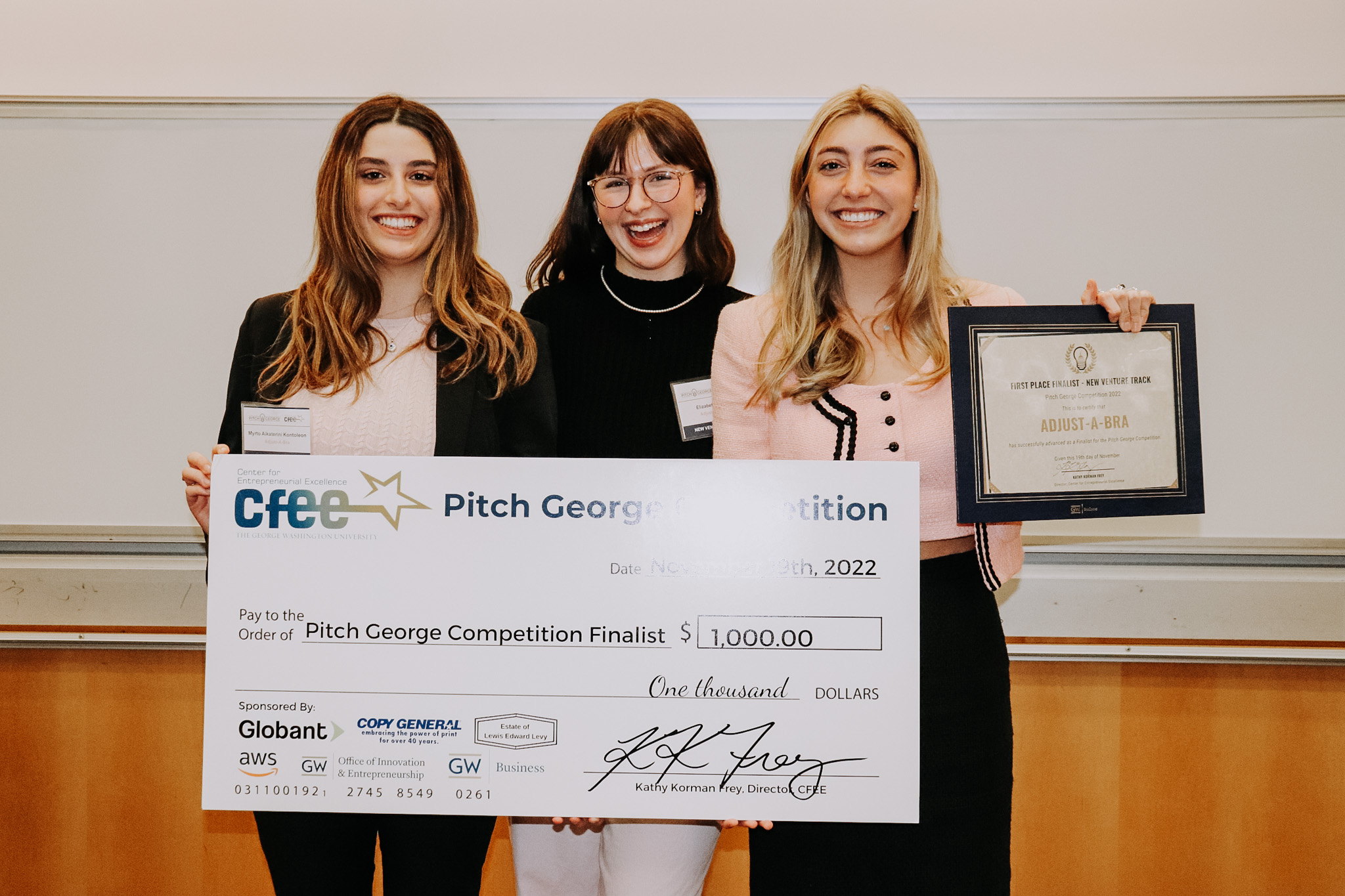 George Washington University graduate student Júlia Cardoso, B.S. ’16, has long been more interested in the cultural aspects of business. Her day job, after all, is financial analysis at the International Monetary Fund, requiring her to think with a global mindset and placing her in countries all over the world.

But this fall, Cardoso enrolled in an elective entrepreneurship course, which Assistant Professor of Management Jungho Suh taught, that forced her to think with a startup mindset—a way of looking at the world she hadn’t practiced. One of the class’s requirements is to enroll in Pitch George, an elevator pitch competition that is one of GW’s premier entrepreneurial initiatives organized by the GWSB’s Center for Entrepreneurial Excellence (CFEE).

While brainstorming with classmates Zay Bo Bo Oo and Yantonius Edyson Bessie, she thought back to her travels in sub-Sahara Africa and remembered seeing women produce and sell textiles on the street in sort of an informal market. Those women were acting entrepreneurially, she thought. Maybe she could also think informally and tap into the cultural roots of business.

“When we started to think about potential themes, my teammates and I were much more inclined toward the social side of things instead of an actual startup,” she said. “I didn't take this class to start anything of my own for profits. We wanted to do something that was meaningful.”

That extrinsic thinking paid dividends. She and her team left the competition with $1,000 in prize money after winning Pitch George’s Social Venture Track for their idea—one they’d call She-Empowered—that would help provide essential resources to women entrepreneurs in Botswana, the country with the highest number of women business-owners in the world. 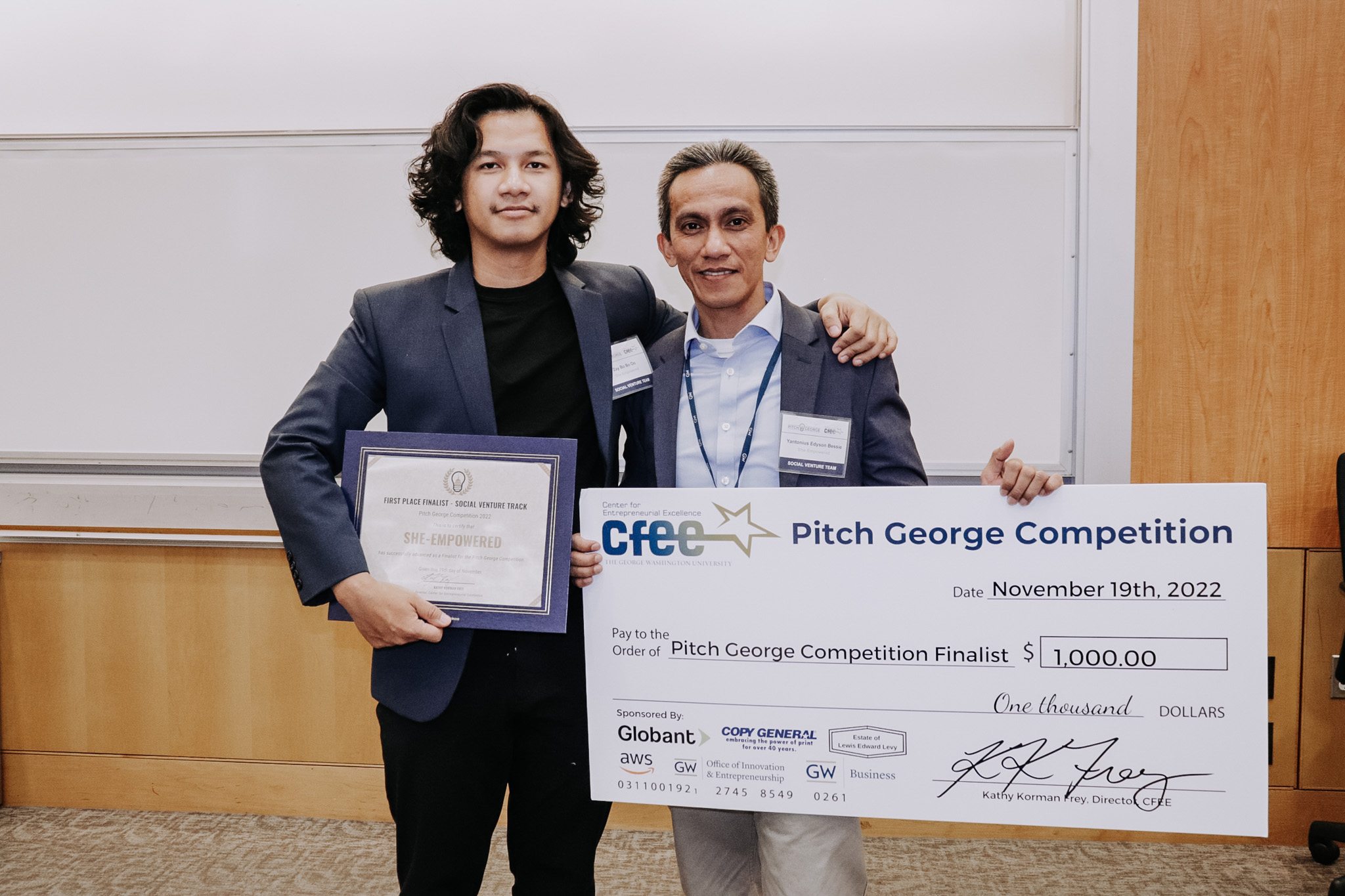 Participants in Pitch George had three rounds of presenting in front of judges, with the finals happening on Nov. 19. The competition takes place each fall semester and allows young entrepreneurs from any GW school to present their business ideas, get valuable feedback on the viability of their business concepts and win up to $15,000 in startup capital. The competition offers a real-world view into entrepreneurship and hands-on preparation for the New Venture Competition through the support of GW's academia and network of business executives from the greater Washington, D.C., area.

It has equal opportunity for those just getting their feet wet in entrepreneurism and those with some semblance product already out on the market.

“In the seven years that I've been managing Pitch George, we've seen several teams start with a basic outline of an idea and use this competition as a launch pad into a prosperous entrepreneurial career,” said Jess Vodilka, who is Pitch George’s event director. “It is incredibly inspiring to see our students flourish beyond GW's classrooms and note Pitch George as the first milestone in their journey.

About two-thirds of Pitch George participants are enrolled in entrepreneurship classes, and roughly half of the students are business or entrepreneurship majors with the other half coming from over GW. Students evolve from a rough idea in the first two weeks of class, out of their comfort zone, and into face-to-face feedback from judges and mentors.

“It's a fun way to learn and practice social skills when there's a tough question from a judge, communication and business such as your product or service, target market, financials, and competitive advantage," said GWSB Professor and CFEE Director Kathy Korman Frey.

This year’s Pitch George had a total of 58 applications, and seven of them pitched in the final round. An additional six teams received the Be Kind Tech Fund, administered by Globant Ventures.

Environmental engineering Ph.D. student Lingchen Kong was one such winner who had more of a refined product to pitch. His idea, called Ellexco, offers an innovative technology for direct production of lithium hydroxide from geothermal brine, using electricity as the sole input. He and his teammate, School of Engineering and Applied Science assistant professor Xitong Liu, won the Tech Venture Track competition, also with a $1,000 prize. 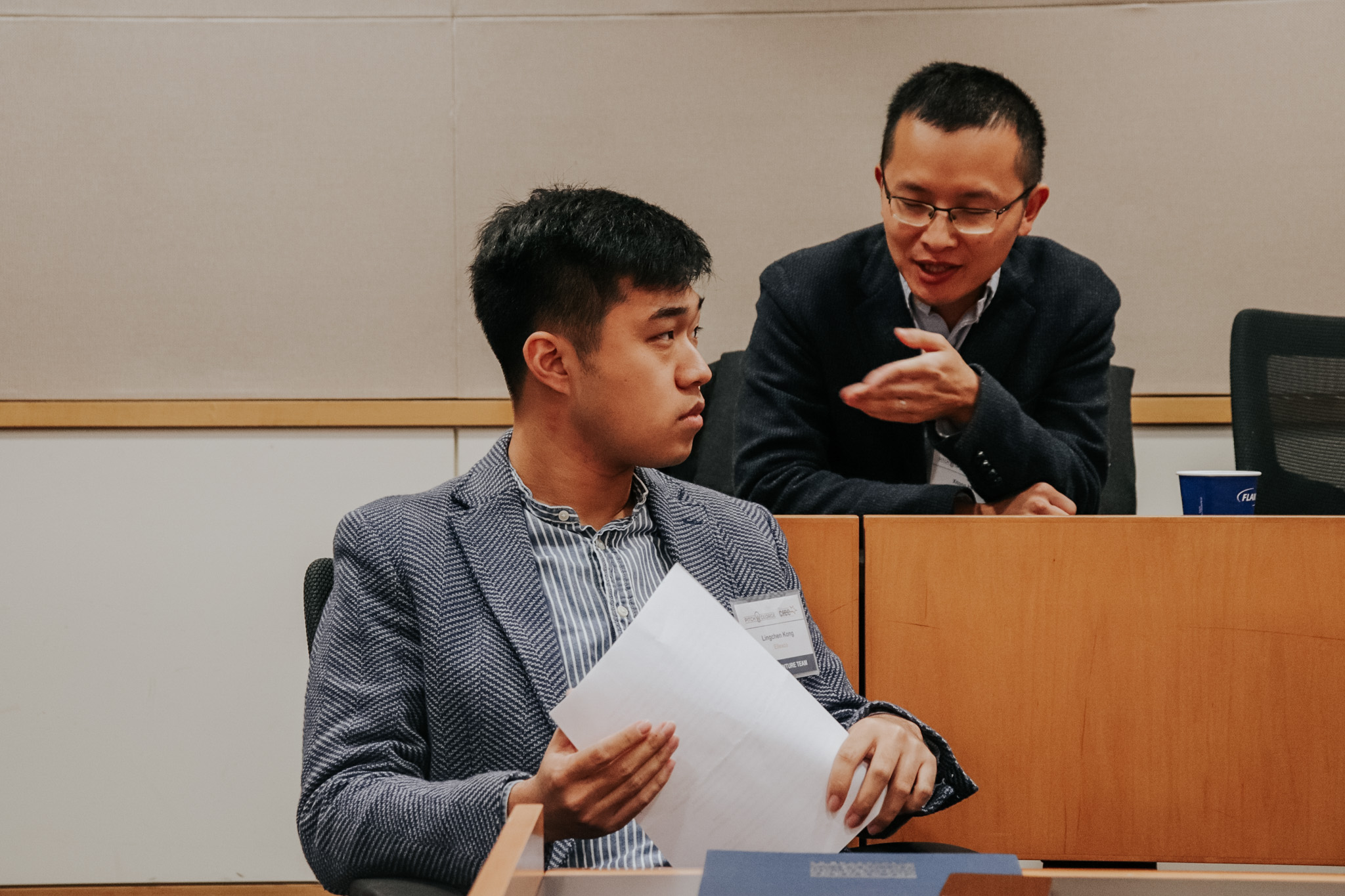 Ph.D. student Lingchen Kong and School of Engineering and Applied Science assistant professor Xitong Lui, who won the Tech Venture Track, discuss strategy during the final round of the Pitch George competition. (Photo by Lena Ebadi)

Ellexco’s goal is to make lithium extraction cost-effective and environmentally friendly, especially as the demands for the element spike 500% by 2050, according to the Department of Energy (DOE).

Kong and Liu founded Ellexo in 2021 and have won two different phases and are now in the third phase of the Geothermal Lithium Extraction Prize competition, which is run through the DOE. Kong is grateful Pitch George allowed them to think about Ellexco through a business lens to compliment the science behind the product.

“The DOE competition is more technical, and the Pitch George is more catered to the financial and commercial side,” Kong said. “So, we really got very useful feedback from the judges about how we have to think carefully about our business model.”

GWSB sophomore innovation and entrepreneurship major Camryn Baum and her team of Elizabeth Paul, Ornella Libi, Maria Camila Torres and Myrto Aikaterini Kontoleon won the top prize in the New Venture Track for patent pending redesign of the everyday sports bra, called Adjust-A-Bra. These students connected in Korman Frey’s Management 3300 class, which also has Pitch George as a requirement in its curriculum.

Her team dove into market research to find that not only does the clothing adjust inadequately but also that cycling through so many that no longer fit is unsustainable and costly. Baum and the team were appreciative to pitch something that offered a less talked about perspective of women’s clothing.

“If your idea is a good idea, and you know how to present it, it will be heard by people,” Baum said. “That’s something I had to learn, and I think that GW giving the kids the resource now to do that is so important.”

Baum comes from a family of entrepreneurs. She believes creative thinking is vital to a strong economic and social ecosystem, and she’s grateful Pitch George contributes to that.

“Having that innovative thinking is what keeps a company alive,” she said.  “This competition definitely fosters that in people, which I think is super important.” 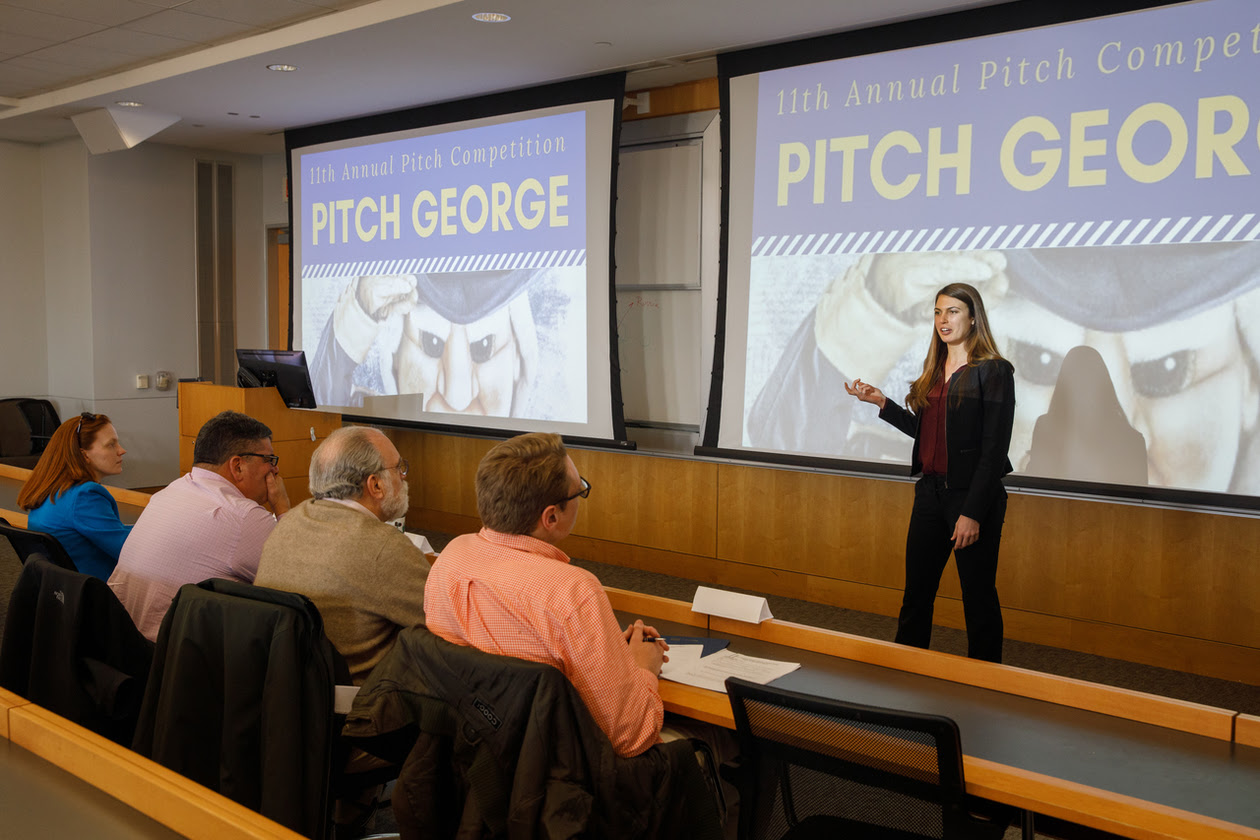 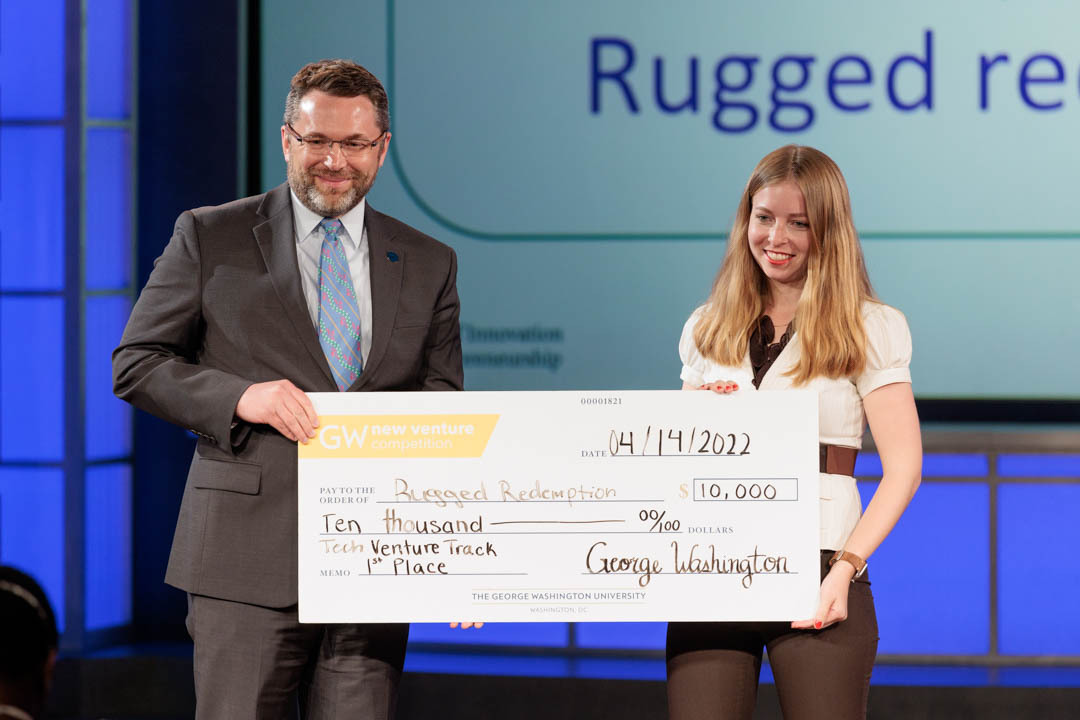 Student Entrepreneurs Win Funding and Other Cash Prizes at 2022 NVC