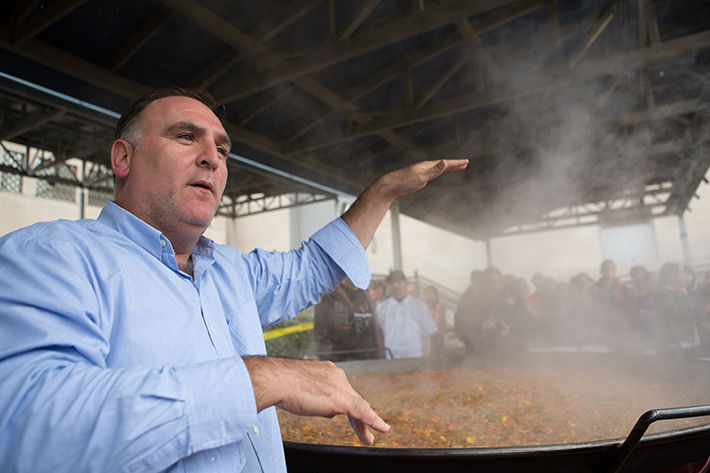 First, world-renowned chef José Andrés led George Washington University students on a tour of the global food movement with the “World on a Plate” course, and then he inspired them to create a “new American Dream” during his 2014 Commencement speech.

For his next chapter at GW, Mr. Andrés will bring his first fast-casual eatery to the Foggy Bottom Campus.

Beefsteak, a low-key, dine-in and take-out restaurant, will be located on the ground floor of the Science and Engineering Hall at the corner of 22nd and I streets Northwest. It is scheduled to open early in the spring 2015 semester.

"The George Washington University is the perfect home to introduce our first Beefsteak location,” Mr. Andrés said. “The university has always brought the bigger issues about food to the spotlight and in many ways, I was inspired by the conversations I had with my students about the future of food in creating this concept.”

The restaurant takes its name from the beefsteak tomato, but the tongue-in-cheek reference is also meant to imply that vegetables can be just as filling as meat. To that end, the menu is built around a hearty selection of vegetables.

Beefsteak will serve meal-sized bowls of warm grains paired with flash-prepared vegetables and house made sauces. Patrons also can top off their bowls with extra protein. Though there will be a number of composed bowls, the menu is designed to mix-and-match ingredients to taste.

The restaurant’s nutritious approach to a meal-on-the-go aligns with Mr. Andrés’ advocacy work to improve access to healthy food globally. He is a member of GW’s Urban Food Task Force, a culinary ambassador of the Global Alliance for Clean Cookstoves, and the founder of World Central Kitchen, a humanitarian organization to combat food insecurity and hunger.

“Beefsteak is about good food, fast, and I can’t wait to open its doors to the people of GW and beyond,” Mr. Andrés said.