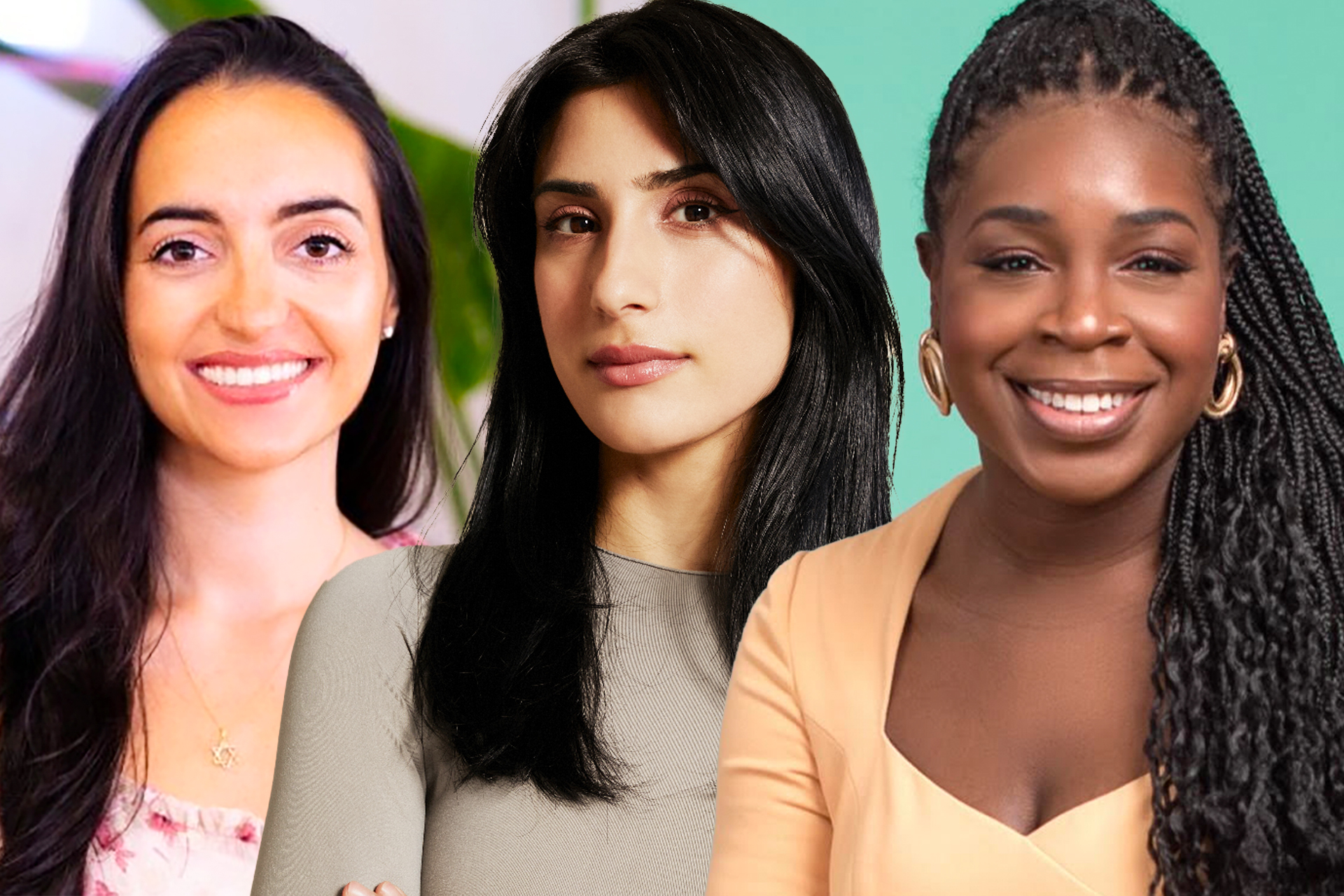 From left, GW alumnae Gabriella Tegen, Yara Bishara and Chinemelu Okafor were recognized by the Forbes 30 Under 30 lists.

Three George Washington University alumnae were recently named by the business magazine Forbes to its annual 30 Under 30 lists. This year, GW alumnae were recognized for making major impacts in retail and ecommerce, education and media.

Two graduates of the Columbian College of Arts & Sciences were selected: Chinemelu Okafor, M.A. ’18, was named on the education list, and Yara Bishara, B.A. ’15, was chosen in media. From the School of Business, Gabriella Tegen, B.B.A. ’16, was selected for the retail and ecommerce list.

The magazine’s annual set of lists recognize a total of 600 young leaders, entrepreneurs and founders in 20 industries who are working to build a brighter future and solve the problems of tomorrow.

Bishara, a senior producer for NBC News, said being named along with with other industry figures she admires felt “surreal” and overwhelmed her with gratitude and excitement.

“I immigrated to this country when I was 10 years old and hardly knew any English,” Bishara said. “My family and I have worked incredibly hard to make something for ourselves here. As a Palestinian, I was acutely aware of the lack of representation in leadership roles in media.”

After graduating from GW, she went to work at The New York Times, which “felt like I was at the center of the universe,” she said, “and I had to pinch myself every time I walked into that newsroom.”

Four years ago, she produced and edited a video for The New Yorker, “Royal Weddings, Then and Now: Princess Diana, Kate Middleton, and Meghan Markle.” It became the magazine’s most popular original video, reaching 10 million views on YouTube.

Last March, she joined NBC News to help oversee a team of video journalists producing digital documentaries that air on Peacock, NBC News NOW, MSNBC and on NBC News Digital properties. Her team recently produced “Dear Noah: Pages from a Family Diary,” shedding light on the experience of a transgender teenager and his family.

In addition to her work at NBC News, Bishara has been pursuing her M.B.A. degree at New York University. In the future, she hopes to elevate storytelling to new heights and to recruit and mentor new voices. Being named to the Forbes list of 30 Under 30 in media will give her an edge.

“This wasn’t just a win for me, but it was a win for my family and community,” Bishara said. “Now more than ever, I’m invigorated and excited about the future of media and storytelling and I can’t wait to see what’s next.”

Easing the way for aspiring economists of color

Currently pursuing her Ph.D. at Harvard, Okafor founded and leads the Research In Color Foundation, a nonprofit supporting aspiring economists of color. Like Bishara, Okafor said it felt “surreal” to be included on the Education list.

The idea for Research In Color grew out of her frustration with what she saw as barriers preventing full access to the culture of academia generally and to economic studies specifically. She is dedicated to increasing diversity and reducing the financial barriers for Black people and people of color who pursue economics and related professions.

“It was in that moment of frustration that I realized that the most important feature of my trajectory was meeting my first mentor at the World Bank Group,” Okafor said. “It was this experience: Learning the secret nuances of economics, understanding the implicit culture of the field and comprehending the unwritten and unspoken rules of the game that eventually led me to advocate for myself and others professionally. Research In Color is dedicated to elucidating the opacities of the economics profession, generally, and Ph.D. economics pipeline, specifically, through mentorship.”

While at GW, she worked at the World Bank and at the International Finance Corporation (IFC), where Tristan Reed became an important mentor for her.

“This was the experience that directly opened doors for me in economics and politics,” Okafor said, “and this was the defining experience that underpins the mission and work of Research In Color. With my mentor supporting me, I was able to enter spaces I never knew existed. I would not have met my mentor, however, if I hadn't capitalized on the many job postings sent internally to GW graduate students from the economics department. I also regularly went to the office of Julianna Hutchins, who works as a career coach in GW's Center for Career Services, to prepare myself for interviews and applying.”

Okafor still uses what she learned from Hutchins to support her mentees at Research In Color, she said. She is also grateful for the support of other faculty and staff members at GW.

“In all, D.C. is one of the most prominent hubs for economics and politics,” she said. “Going to GW was an actively conscious decision I made for this reason, and it paid off in every way.”

Inclusion on the Forbes list, she said, will enable her “to scale things up” and attract more aspiring economists and mentors to her organization.

“It is extremely critical to continue to secure funding and partnerships with high-ranking institutions in economics,” Okafor said. “Being on the Forbes list folds neatly into my life at the moment. I’ve been working with some very wonderful professors, and I believe being on Forbes is a bonus. I will cherish this honor and use it to help level the playing field in economics.”

Drawing on what she learned from her double major in international business and marketing, Tegen cofounded Smartrr to help direct-to-consumer (DTC) brands, which sell to customers without the use of retailers or wholesalers, offer easily customizable subscriptions to customers.

“We are empowering ecommerce brands to take control of recurring revenue channels in their businesses,” Tegen said, “from subscriptions to memberships, all in an effort to help extend lifetime value (LTV) and improve business metrics for them.”

Smartrr works with the skincare brand Starface and Cameron Diaz's wine company, Avaline, among others. Inclusion on the Forbes list for retail and ecommerce will raise its profile and help it attract more partners.

“We are very excited to get Smartrr in the hands of more DTC brands in this next year,” Tegen said. “2022 was an incredible year—in addition to seeing Smartrr in the hands of hundreds of DTC brands, we measured some key results demonstrating how Smartrr helps brands achieve better LTV by improving the subscriber journey. In 2023, we plan to expand our offering across various initiatives.”

Tegen said she is “extremely humbled” to be included on the Forbes list.

“I was blown away by the caliber of folks honored this year and to be included in this group is something I would never have imagined a possibility,” Tegen said. “I do have the privilege of knowing several people honored across multiple categories in this year’s awards, and I am inspired by each of them.”