Science and Engineering Hall ‘Topping Out’

Administrators, trustees and members of the university community celebrated the major milestone in the building’s completion.
December 18, 2013 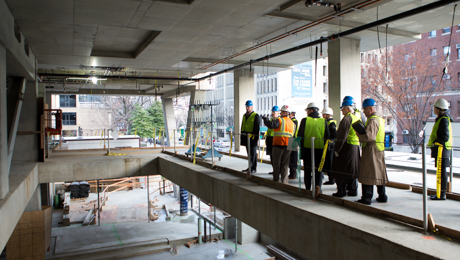 The tour of the George Washington University's Science and Engineering Hall held on Monday celebrated the compeletion of the initial concrete structure.

The walk-through, led by Clark Construction, celebrated the completion of the highest or top point of the project’s concrete structure, a stage known as “topping out.” Exterior work will be completed in the coming months, with occupancy slated for winter of 2015.

“This is the milestone we’ve all been waiting for,” Dr. Knapp said. “We’re just a little over a year away from opening the building and bringing our students and faculty into what is going to be an extraordinary new part of this university.”

“This is going to put George Washington on the map as a center for science and engineering innovation,” he said.

The topping out celebration marks an important stage in the completion of the Science and Engineering Hall, which the university broke ground on in 2011. Boasting eight floors above grade and six floors below grade, including four floors of parking space, the state-of-the-art building will serve as the center of science and engineering on the Foggy Bottom Campus, offering 290,000 square feet of space for teaching, research, support and faculty offices.

At the end of the tour, Dr. Knapp, School of Engineering and Applied Science Dean David Dolling, Columbian College of Arts and Sciences Dean Ben Vinson III, School of Medicine and Health Sciences Dean Jeffrey S. Akman, trustees and other notable attendees signed a wall at the ground floor to commemorate the occasion.

Following the tour, a formal reception was held in appreciation of the many contributors to the project. Board of Trustees Chairman Nelson Carbonell, Dr. Dolling, Dr. Vinson and Dr. Knapp offered remarks highlighting the innovative research of faculty and staff, the generous support from alumni and friends of GW and the Science and Engineering Hall’s role in advancing the university’s innovative, cross-disciplinary, research-focused initiatives.

“The Science and Engineering Hall is sometimes referred to as a catalyst, but that is not entirely accurate,” Dr. Dolling said. “A catalyst simply speeds things up that were going to happen anyway, whereas this center is an enabler, because it has enabled us and will continue to enable us to do what we could not do before and accomplish more as a university.”

“Our vision is to be a world-class center for innovative and collaborative engineering, research and learning in the heart of the nation’s capital,” he said. “We are now well on our way.”

Dr. Vinson said that modern facility significantly increases the amount and quality of lab and classroom space, and includes a multi-use auditorium to host science symposia and an imaging suite to support research and learning.

“From developing life-saving treatments for tuberculosis to exploring the environmental impact of climate change, the Science and Engineering Hall will have a transformative effect on our collaborative research efforts in biology, chemistry, physics and hominid paleobiology, bringing together an array of scholars to further advance learning and discovery,” Dr. Vinson said.

Dr. Vinson’s comments echoed Dr. Knapp, who noted that the building reaffirms the university’s role as a vibrant center of innovation and discovery.

“I think it’s also a symbol of what it means to be in a city that has a tremendous concentration of scientists and engineers that is often thought of as the center of power and policy,” Dr. Knapp said. “In order for us to have credibility in the future in the policy realm, we are going to also need to have credibility and authority in the realm of technology, science and engineering. That is what we are really bringing about with this fabulous new project.” 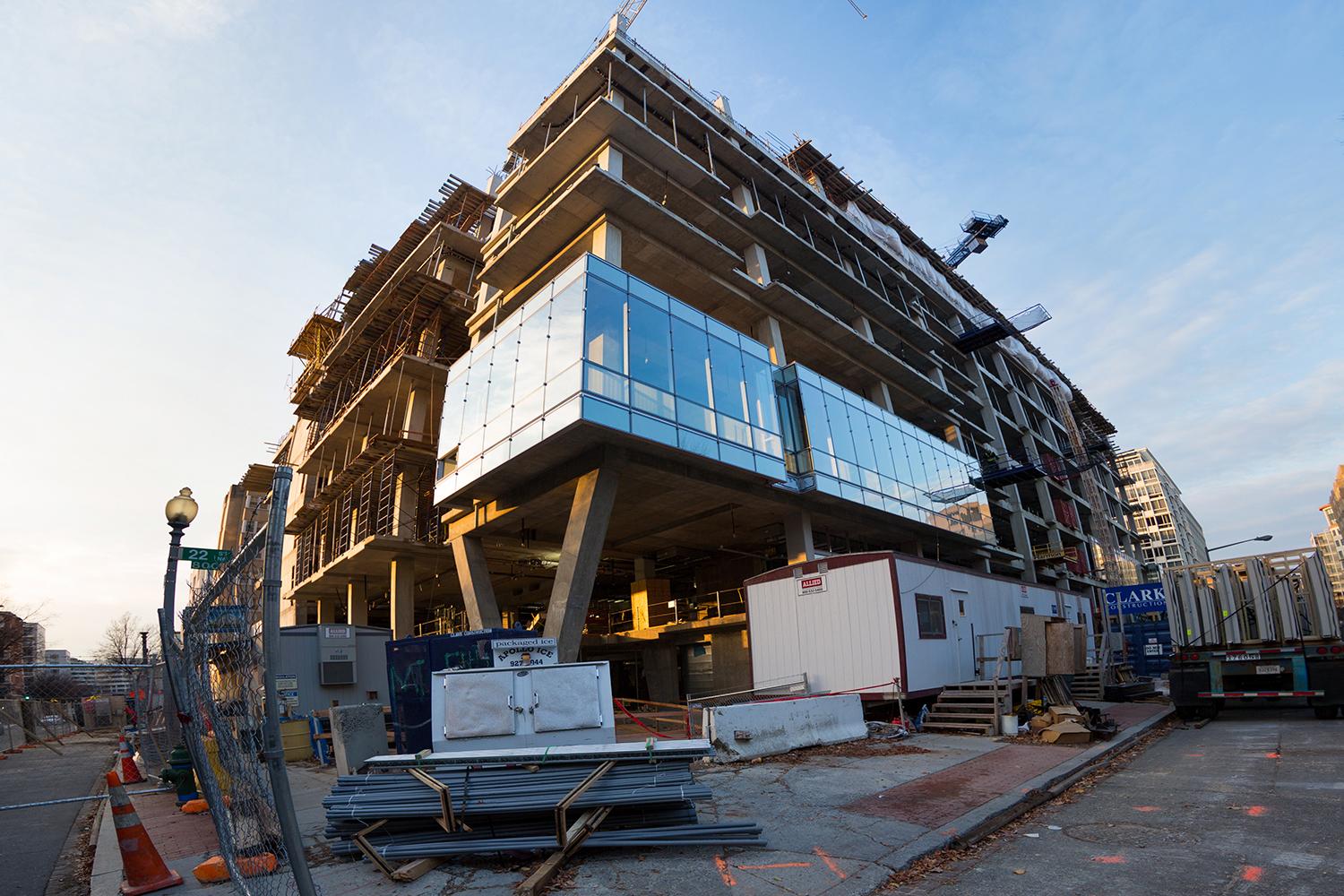 The view of the George Washington University's new Science and Engineering Hall from 22nd and H streets. 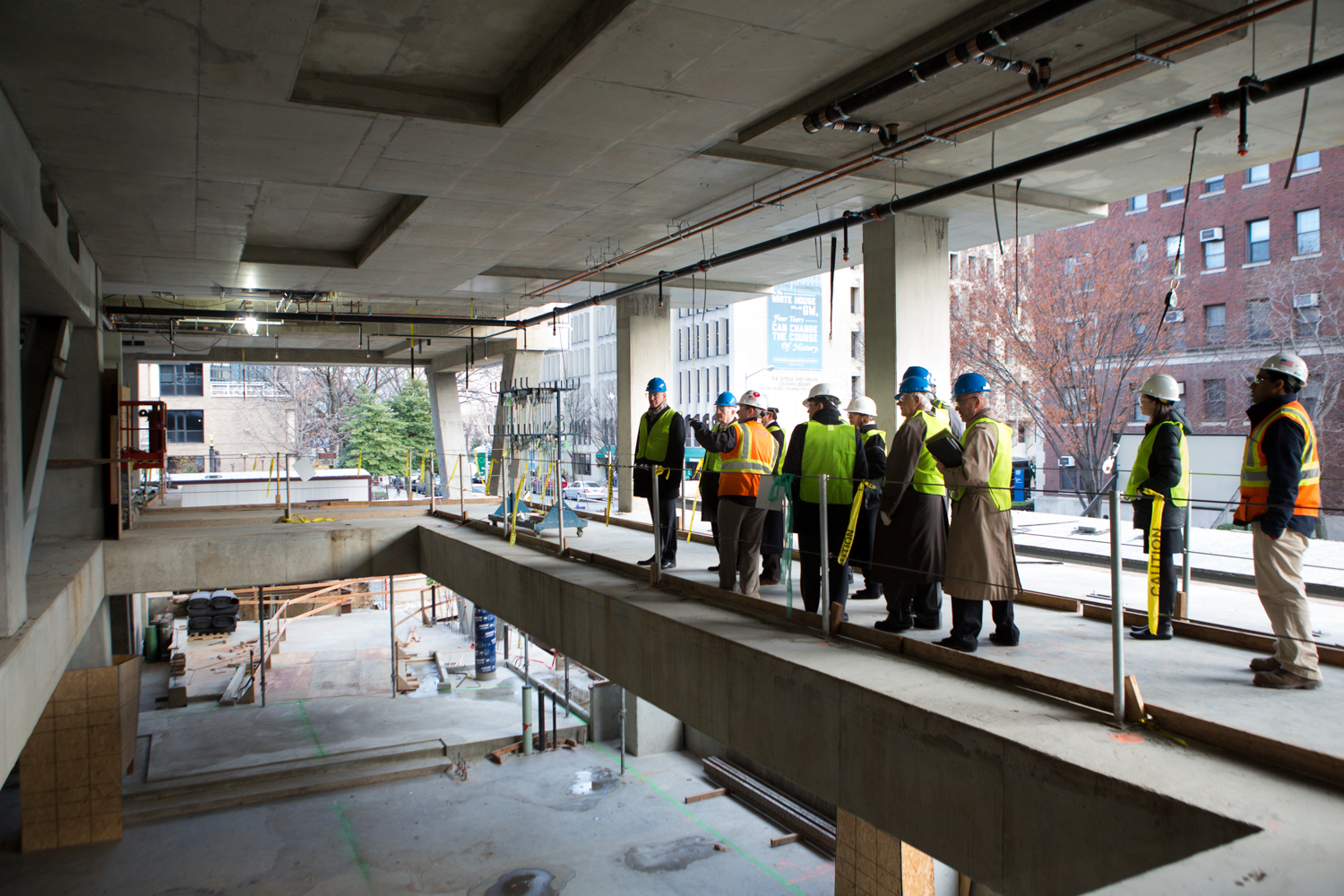 A sneak peek tour of the new facility was held Monday for administrators, donors, and friends of the university. 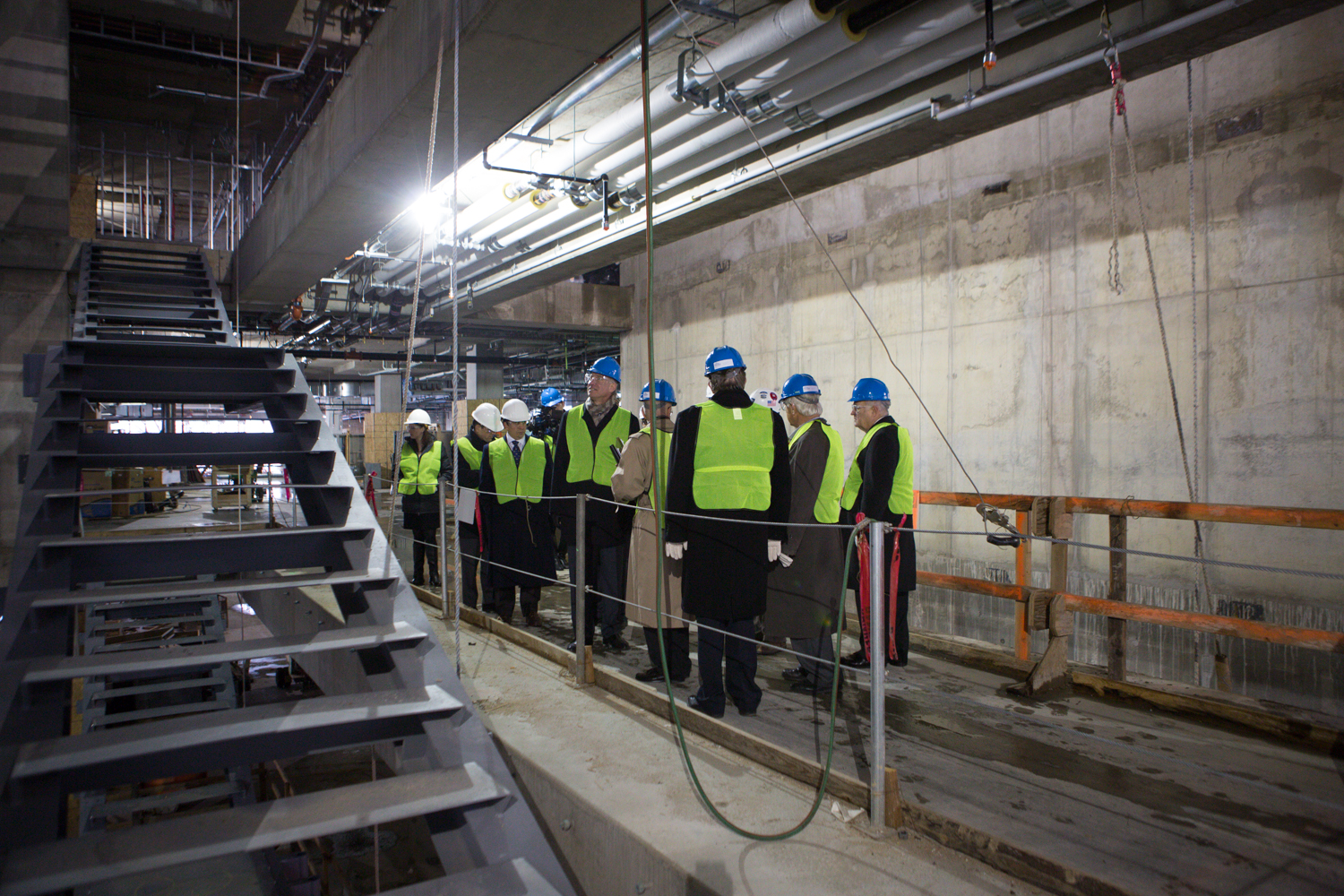 The tour was held in celebration of the topping off of the building, a milestone in the project's development. 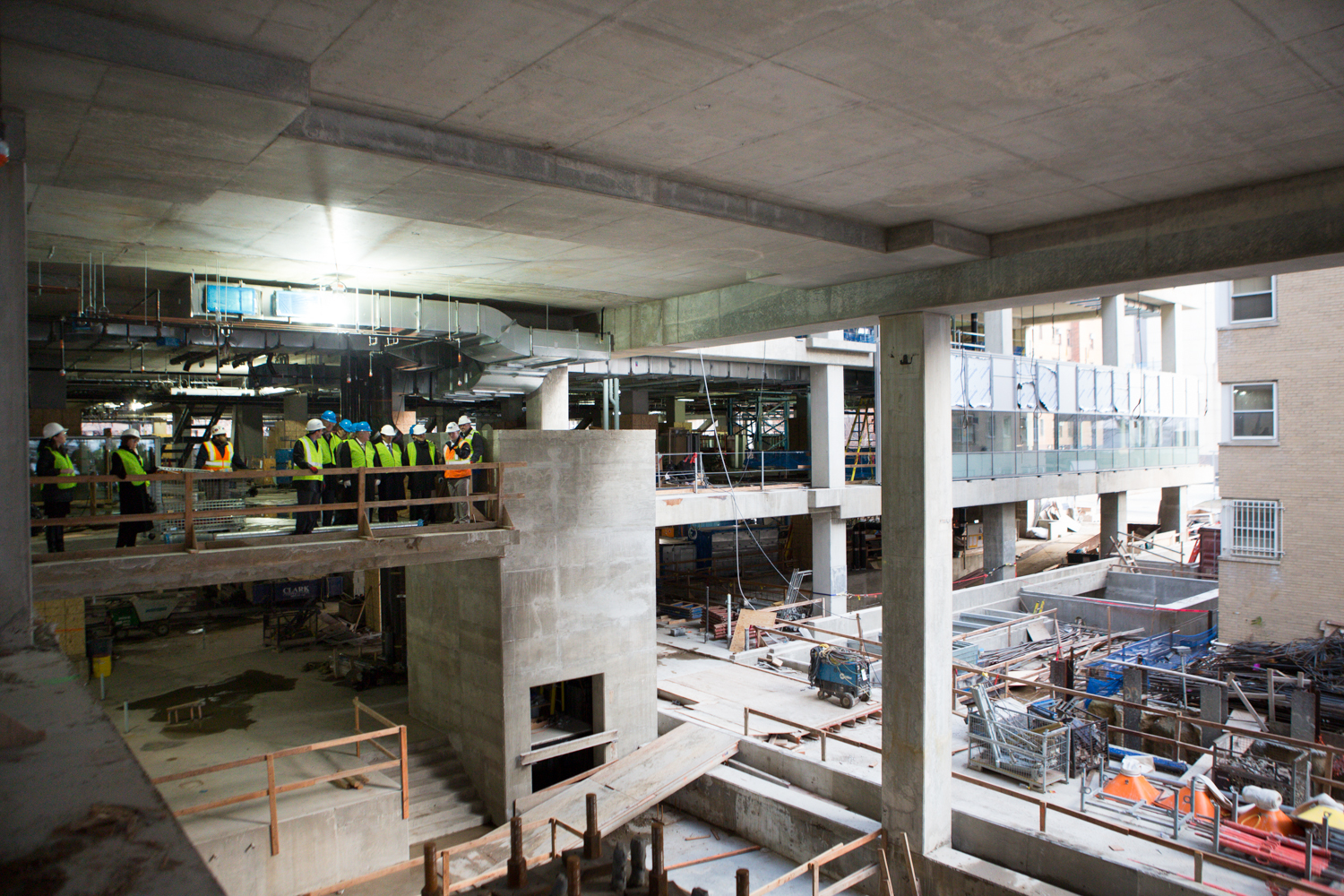 The concrete structure is now complete and the hall is slated for occupancy in winter of 2015. 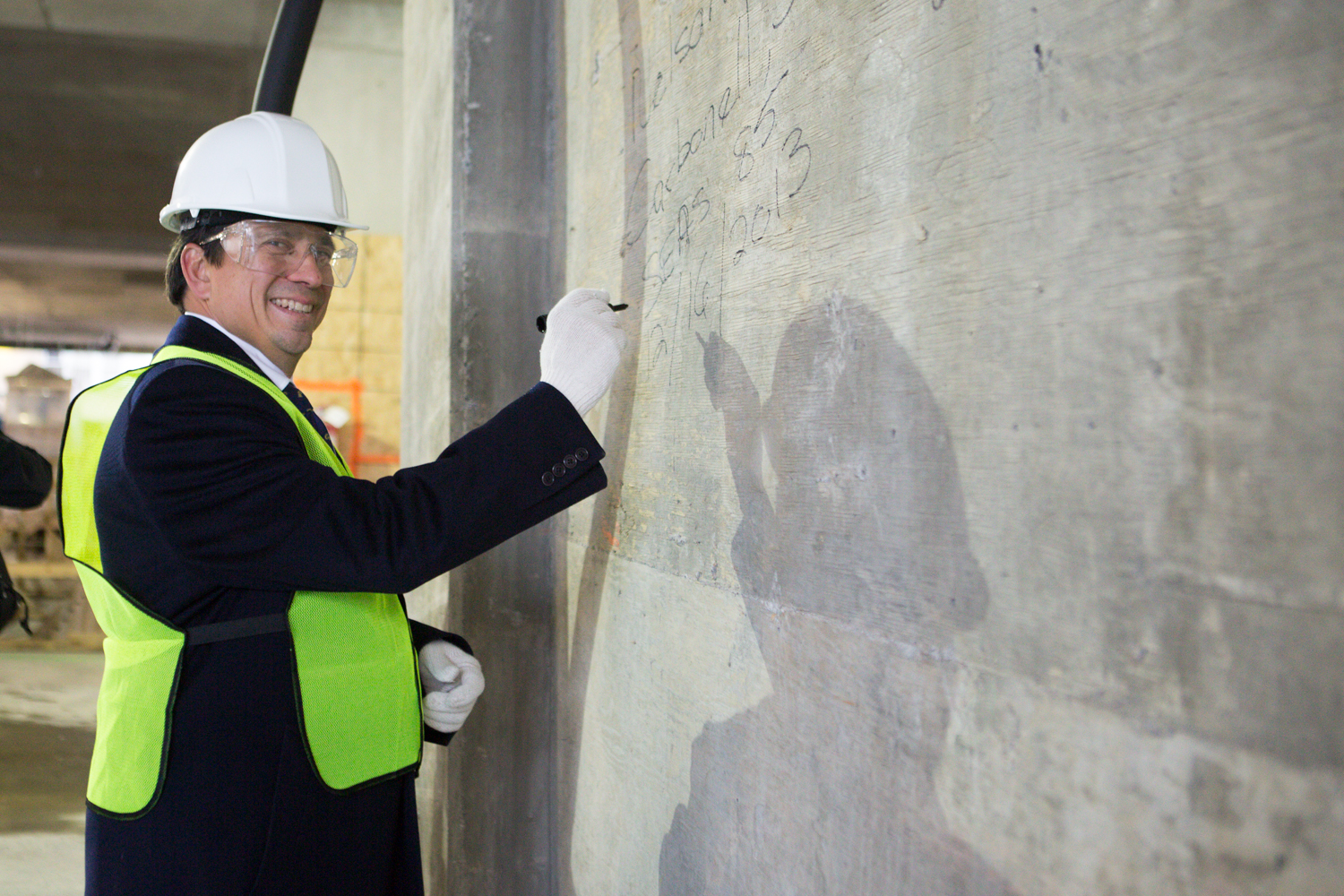 Board of Trustees Chairman Nelson Carbonell attended and signed a wall at the ground floor. 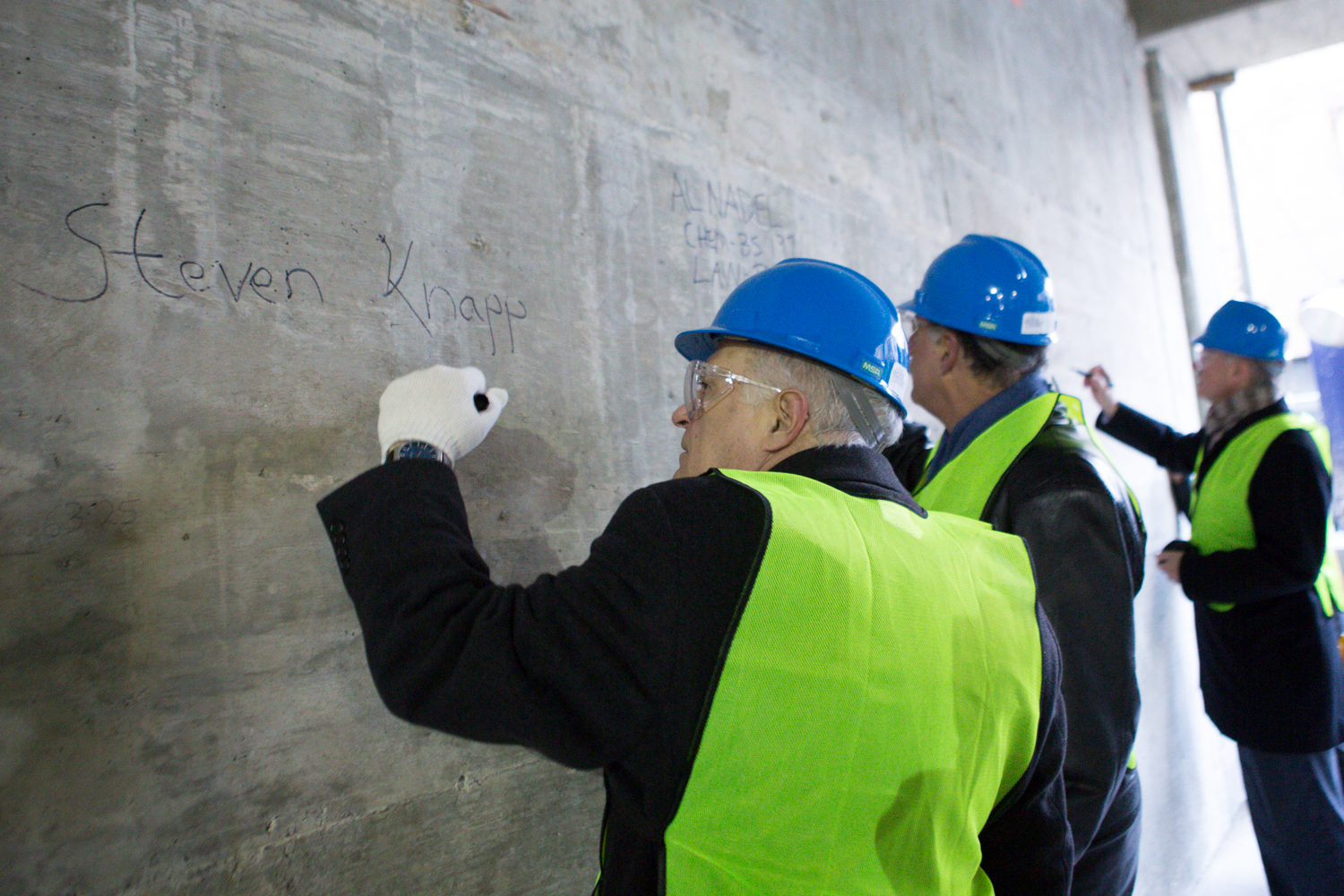 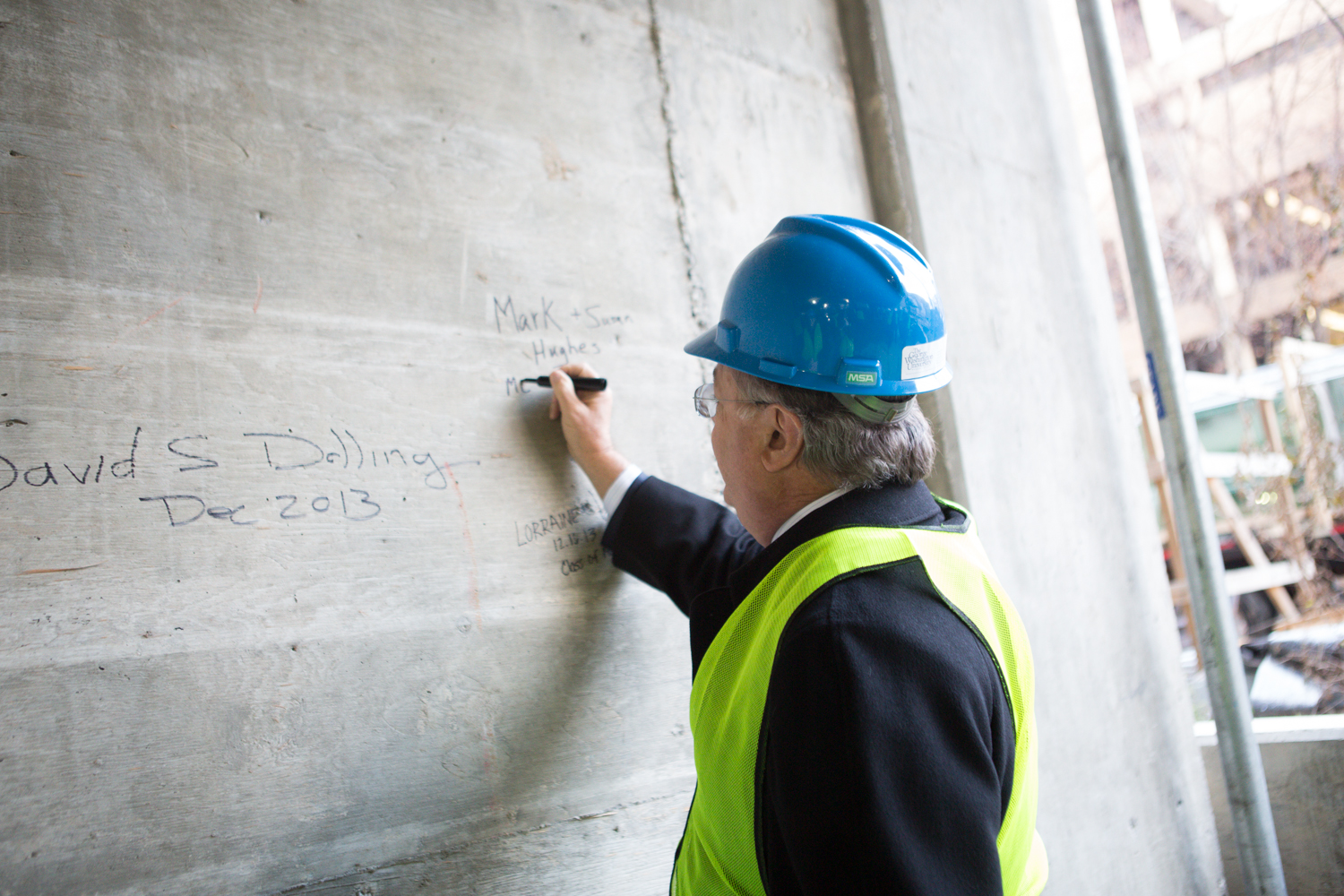 Trustee Mark Hughes leaves his signature on the wall at the ground level of the building. 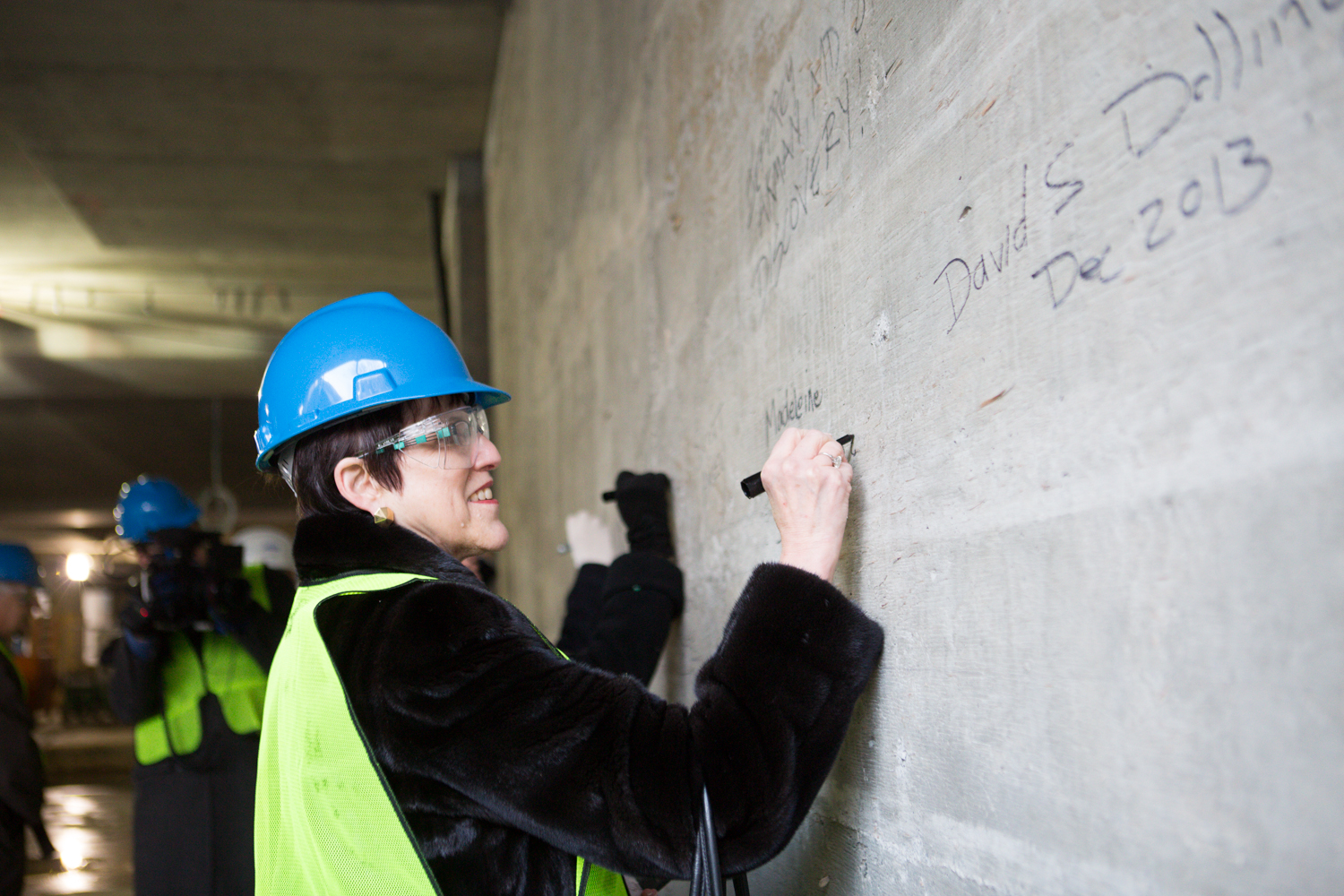 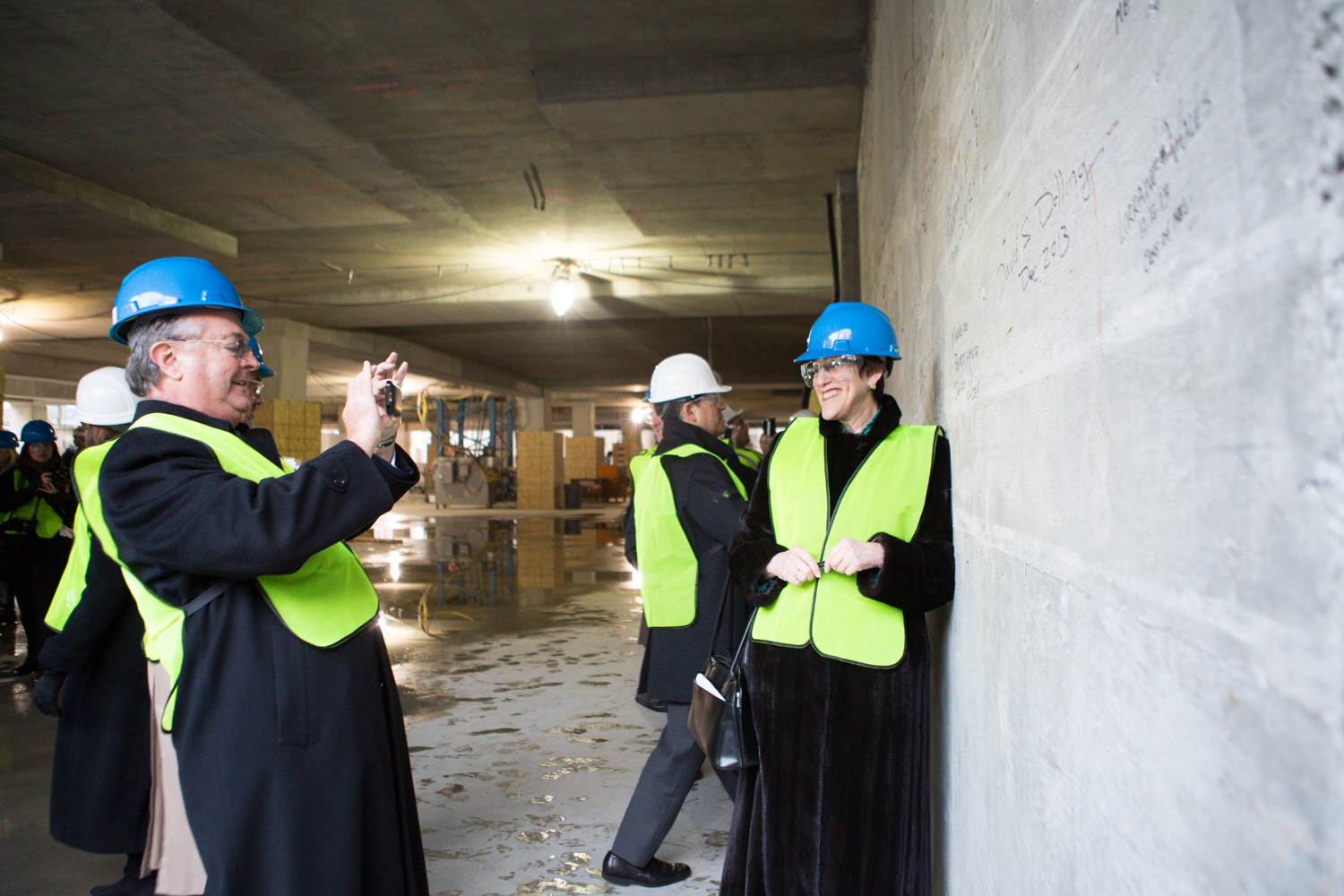 Mr. Hughes takes a quick shot of Ms. Jacobs in front of her name.