A George Washington University Columbian College of Arts and Sciences Ph.D. student recently published a paper about the evolution of Central and South American anoles, a group of tropical lizards that have been historically understudied compared to their distant relatives in the Caribbean. The study was a collaboration with researchers from the Smithsonian National Museum of Natural History.

Jonathan Huie, a Ph.D. candidate in the Department of Biological Sciences, got involved in this work as an undergraduate student through a National Science Foundation research internship at the Smithsonian National Museum of Natural History. This research sparked his passion for lizards and ultimately guided him toward a doctoral program studying salamanders at GW.

Mr. Huie is lead author of the new paper, published in The Biological Journal of the Linnean Society on Wednesday. Mr. Huie spoke to GW Today about the impact of this research.

Q: Why has there historically been such a significant gap between what researchers know about Caribbean anoles and what they know about anoles found in Central and South America?
A: Most of the 400-plus species of anoles live in Central and South America, and yet the lion’s share of anole research has focused on Caribbean species. There are likely several reasons why, but ease and accessibility are definitely important factors. In the Caribbean, anoles are quite abundant and easy to find but mainland anoles are more secretive, likely because they have more predators to hide from. It’s difficult to study what you can’t see.

Another reason may be because islands themselves are excellent study systems. They’re small and easier to make sense of compared to mainland systems. There’s also a lot of them, which is ideal for replication and hypothesis testing. Lastly, science is often conducted where it’s easiest or most desirable to establish a field site so it’s probably no coincidence that many well-studied anoles occur near vacation spots.

Q: What did your research reveal about how anoles in Central and South America have evolved to fill various ecological niches?
A: Anoles originated on the mainland, then they colonized the Caribbean, and eventually re-invaded the mainland. Caribbean anoles are well-known among biologists for repeatedly evolving sets of species with similar ecologies and morphologies on Cuba, Hispaniola, Jamaica and Puerto Rico. For example, some species live on thin perches like twigs and have convergently evolved short limbs and well-developed toe pads. Other species specialize in living in tree-crowns, on tree trunks, grasses and bushes. We found that when anoles diversified on the mainland the second time, they convergently re-evolved all of the same habitat specialists and morphological adaptations found in the Caribbean—but this time in Central and South America. This is fascinating given what we often believe to be true about islands and continents. 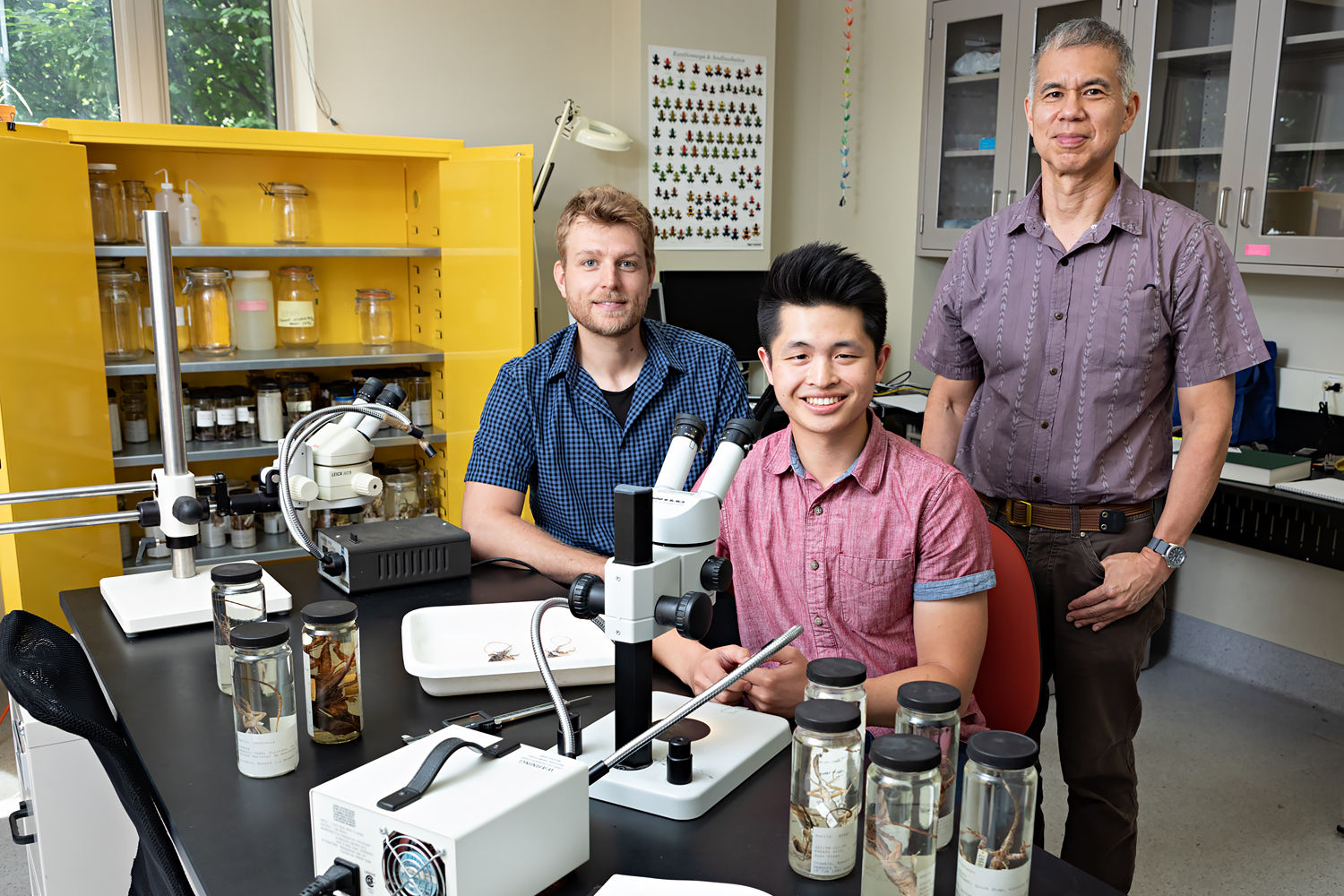 Q: How do your findings challenge long-held assumptions made about evolution on islands compared to mainland habitats?
A: We found that island and mainland anoles are more similar than previously thought. For a long time, it was believed that islands were hotbeds for extreme morphologies and that continents lacked the necessary conditions. In the context of anoles, island species were considered to be unique—that the relationship between habitat and morphology was fundamentally different on islands versus the mainland. However, we found strong evidence that this is not the case.

That is not to say that everything we once thought to be true is now wrong—there are still many differences between island and mainland anoles. However, our research shifts how we should view island and mainland comparisons. Our paper joins other recent studies in suggesting that the mainland is equally good at cultivating morphological diversity as island environments.

Q: How did you get involved in this research, and how did it shape the kind of research you are doing now as a Ph.D. candidate?
A: I got involved as an undergraduate National Science Foundation Research Experiences for Undergraduates (REU) intern at the Smithsonian’s National Museum of Natural History in 2018, under the co-mentorship of Ivan Prates and Kevin de Queiroz. I was a total fish geek and had never studied anoles, but I signed on to investigate the link between habitat and morphology in a handful of mainland anoles.

As a Ph.D. student, I am currently studying salamander limbs to better understand the type of adaptations needed to make the water-to-land transition. The kinds of questions I am interested in for my dissertation are similar to the ones we approached with the anole project. Without my internship, it’s very unlikely that I would have ended up at GW studying salamanders.

Q: How are you planning to build on this research moving forward?
A: There is still so much left to do. In our recent paper, we only published about half of the data I initially collected. We are excited to dive deeper and look at how body size influences patterns of morphological adaptation.

There’s also the other group of mainland anoles that we didn’t look at. I am interested in knowing more about how these other mainland species fit into the puzzle. Did they adapt in a similar manner as the group of mainland anoles we looked at? Or are they doing something different? We would like to know how often evolution repeats itself to produce similar outcomes.