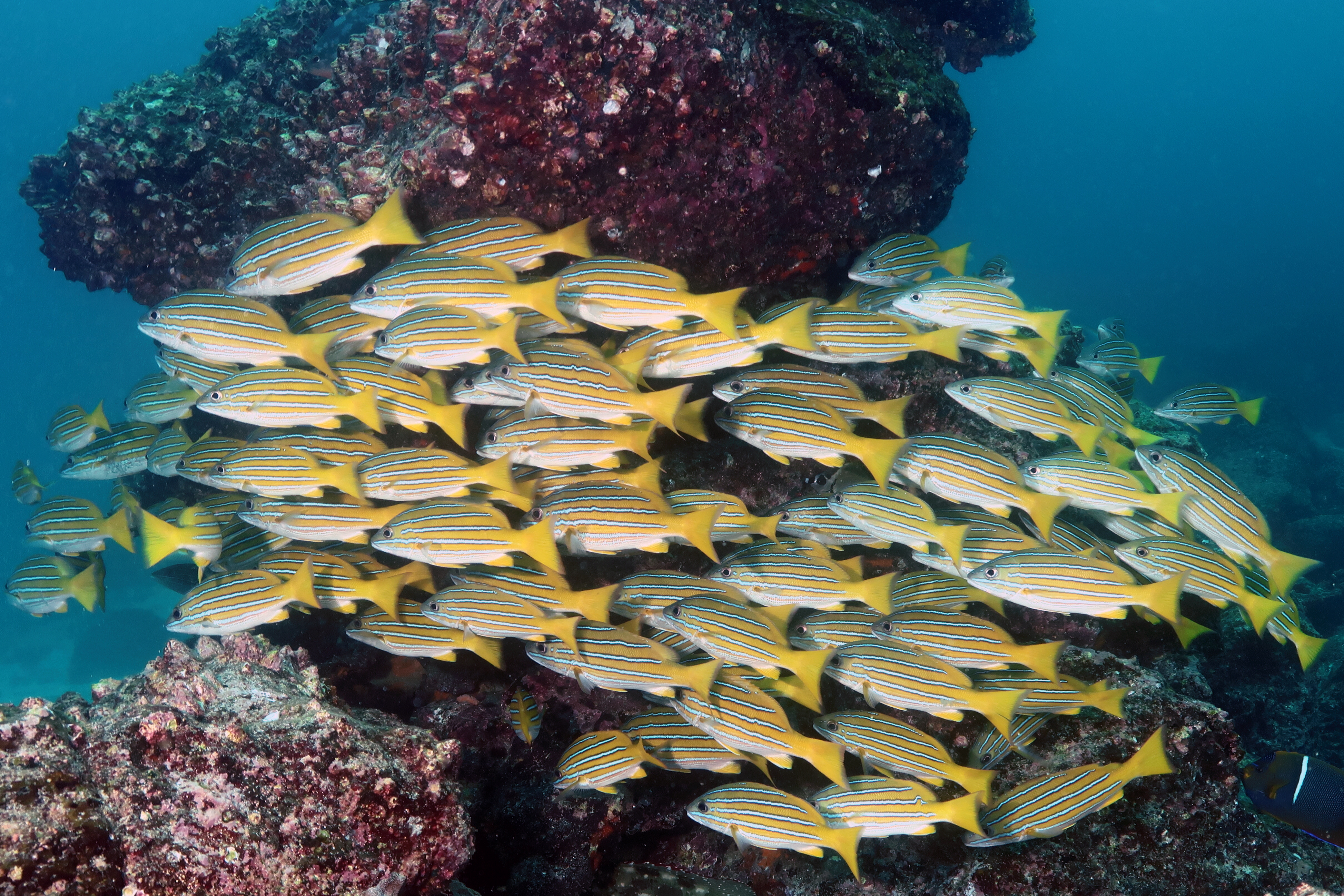 Photo: A school of blue-and-gold snappers in the Galapagos (Photo courtesy: R. Betancur)

Fish that transition from bottom-dwellers to midwater swimmers evolve their bodies in predictable ways, shedding deep-torsos and truncated tail fins for slender torpedo-like shapes. That’s the conclusion of a groundbreaking study by an international group of scientists including Louis Weintraub Professor of Biology Guillermo Orti and several George Washington University alumni and former postdoctoral scientists. The body-shape shifts demonstrate evolutionary determinism—a hotly debated concept that suggests evolutionary outcomes can be predictable and governed by the laws of nature instead of chance.

The National Science Foundation (NSF)-funded study, titled “Evolutionary determinism and convergence associated with water-column transition in marine fish” and published in the Proceedings of the National Academy of Sciences (PNAS), was led by University of Oklahoma Assistant Professors of Biology Ricardo Betancur and Dahiana Arcila, Ph.D. ’17. Betancur was a former postdoctoral scientist in Dr. Orti’s GW lab. Co-authors on the study include Lily C. Hughes, Ph.D. ’18, a postdoctoral scholar at the University of Chicago and a former postdoctoral scientist with Dr. Orti.

Other collaborators include the Smithsonian Institution, Scripps Institution and Old Dominion University in the United States, and James Cook University in Australia and the Universidad Nacional de Colombia. The research is part of a larger $2.4 million NSF-funded collaboration led by Dr. Orti to genetically sequence the “tree of life” for all living and fossil fishes. The PNAS study was funded by a $400,000 NSF grant.

The study involved collecting genome-wide DNA data for over 100 species from the fish family Lutjanidae—better known as snappers and fusiliers. A commercially vital food fish, snappers proved perfect study targets, Dr. Orti said, partly because they are widespread—found in tropical and subtropical waters in oceans around the world—and have existed for more than 45 million years. Dr. Orti’s team captured genetic profiles for the entire snapper family, presenting a historically comprehensive research dataset.

“The reason we could accomplish this is because we had a complete sampling of the family. That is a powerful tool in evolutionary biology,” Dr. Orti said. “We can trace them back to a common ancestor.” 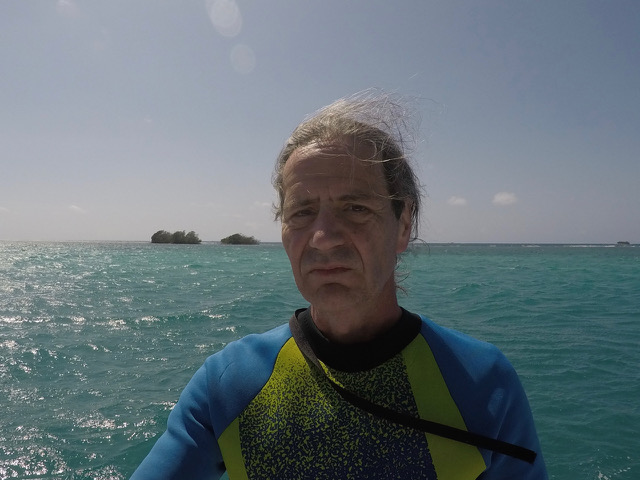 “Benthic” snapper species reside in the lowest water depths while other snappers live almost exclusively in midwaters. But for both, the marine species’ body types match their environments. The deep-bodied benthic forms are suited for the coral reefs and rocky substrates of the ocean floors. The slender midwater species adapt their features to reduce hydrodynamic drag and promote swimming.

The scientists found that snappers at the bottom levels transitioned into the water column and adapted to the new habitats by becoming more slender. “We compiled a great dataset to test observations in the widespread snapper family, and we found that you really do see their body shape evolving again and again independently,” Dr. Hughes said.

The study adds to the growing scientific consensus that, under certain circumstances, evolutionary outcomes are predictable. The snapper’s “ecological transitions have happened independently multiple times in different oceanic basins and the end result is always pretty much the same,” Dr. Betancur said.

Other species have demonstrated similar evolutionary determinism, where diverse body shapes share genetic patterns, the researchers noted. On land, the anole lizards in the Greater Antillean islands “provide a textbook example of evolutionary predictability,” the authors explained. They singled out the giant crown anole in Puerto Rico, which is more closely related to the island’s smaller bush anole than to, for example, similar-bodied giant anoles in Cuba.

Among aquatic organisms, the three-spined stickleback—a small marine fish native to the coasts of North America, Europe and Asia—has colonized thousands of freshwater streams and lakes. In each case, the stickleback has evolved into two forms: a midwater version that is slender-bodied and feeds on zooplankton, and a benthic form that is deep-bodied and feeds on large bottom invertebrates. But, as with the anole lizards, the divergent forms in each lake are more closely related to one another than to their body-shape counterparts in different lakes.

In the long term, the study may transform the field of evolutionary biology by offering more grist for the argument that evolutionary outcomes need not be contingent on unpredictable events, such as rare environmental catastrophes.

“By examining both the genomes and the morphologies of hundreds of species of fishes, Dr. Orti's study provides strong evidence of determinism in the evolutionary process—an idea that has been debated in evolutionary biology for a long time,” said Professor of Biology John Lill, chair of the GW Department of Biological Sciences. “This is the type of empirical research that ends up in textbooks, so it is a very significant finding indeed.”

Meanwhile, Dr. Orti is confident the fish tree of life project, which is expected to form the basis for a planned National Museum of Natural History exhibit, will continue contributing to evolutionary science. “For the first time, this project will provide a unified framework that includes fossil and living species for comparative analyses, from sharks to coral reef and deep-sea fishes, and clarify the ancestry and origins of the most popular food and aquarium fishes worldwide,” he said.