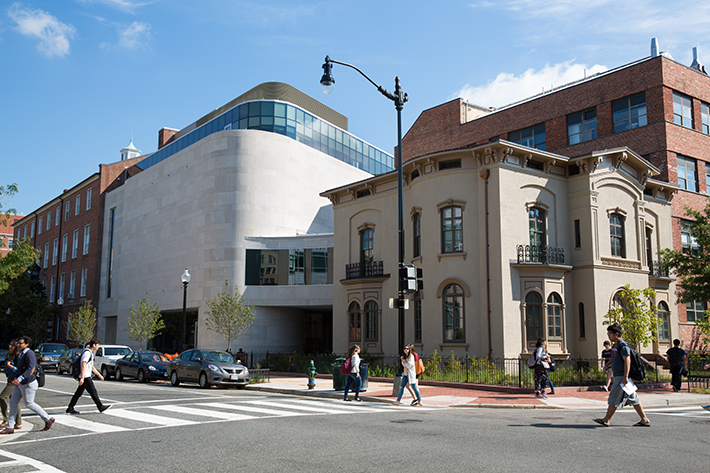 The new George Washington University and The Textile Museum is on the corner of 21st and G streets NW.

By Julyssa Lopez
The new George Washington University Museum and The Textile Museum will open on March 21, 2015. The custom-built museum structure on the corner of 21st and G streets NW will display The Textile Museum’s globally recognized collection of more than 19,000 objects, pieces owned by GW and the Albert H. Small Washingtoniana Collection of nearly 1,000 objects documenting the history of Washington.
GW first announced The Textile Museum would join its campus in 2011. Since then, the university constructed a 46,000 square-foot, state-of-the-art facility that will serve as an arts center on campus. Major construction on the space concluded in the summer, and the university got a first look at the museum during a sneak peek event in June. Museum staff has been putting the finishing touches on the building, conducting extensive testing and calibration of sensitive climate control systems to ensure its objects are well protected. Others have been working to transport objects to the conservation and collections resource center, a 22,000-square-foot facility built on the Virginia Science and Technology Campus.
“Beyond construction, the final stage of installing the museum requires extraordinary behind-the-scenes preparations, including coordinating loans, mounting exhibitions, setting up the new library and shop, training docents, testing security systems and much more,” said John Wetenhall, director of the museum.
The new museum will open with three exhibitions: The Textile Museum’s largest exhibition to date, “Unraveling Identity: Our Textiles, Our Stories,” and “The Civil War and the Making of Modern Washington” and “Seat of Empire: Planning Washington, 1790–1801”—two shows curated from the Washingtoniana collection.
The Textile Museum’s collection includes some of the world’s finest examples of rugs and textiles from the Near East, Central Asia, East and Southeast Asia, Africa and the indigenous cultures of the Americas, some of which date back to 3000 BCE. “Unraveling Identity: Our Textiles, Our Stories” will be an exploration of how more than 100 pieces of clothing, fabrics and other adornments communicate self and status.
“ ‘Unraveling Identity’ will present some of the greatest treasures from The Textile Museum’s permanent collection, representing more than 2,000 years of human history, while also emphasizing the ongoing relevance of textiles in our daily lives,” said curator Lee Talbot. “Through intriguing objects and an active, participatory format, the exhibition will demonstrate how all of us communicate messages about our identity through clothing and accessories.”
The new museum also boasts a special gallery that will showcase Albert H. Small’s trove of historic Washington maps, documents and other rare treasures. Mr. Small, a 2009 recipient of the Presidential Humanities Medal, donated his collection to the university in 2011. The Albert H. Small Gallery runs alongside a glass bridge in the museum that connects to the 160-year-old Woodhull House, renovated to also serve as exhibition space for the Washingtoniana collection.
The university will announce grand opening celebration events in the coming months. The GW community also can participate in educational programs organized by The Textile Museum leading up to March 21.
“We look forward to celebrating the results of these efforts with the university community and many others when the museum opens this March. The opening shows should be spectacular,” Dr. Wetenhall said.