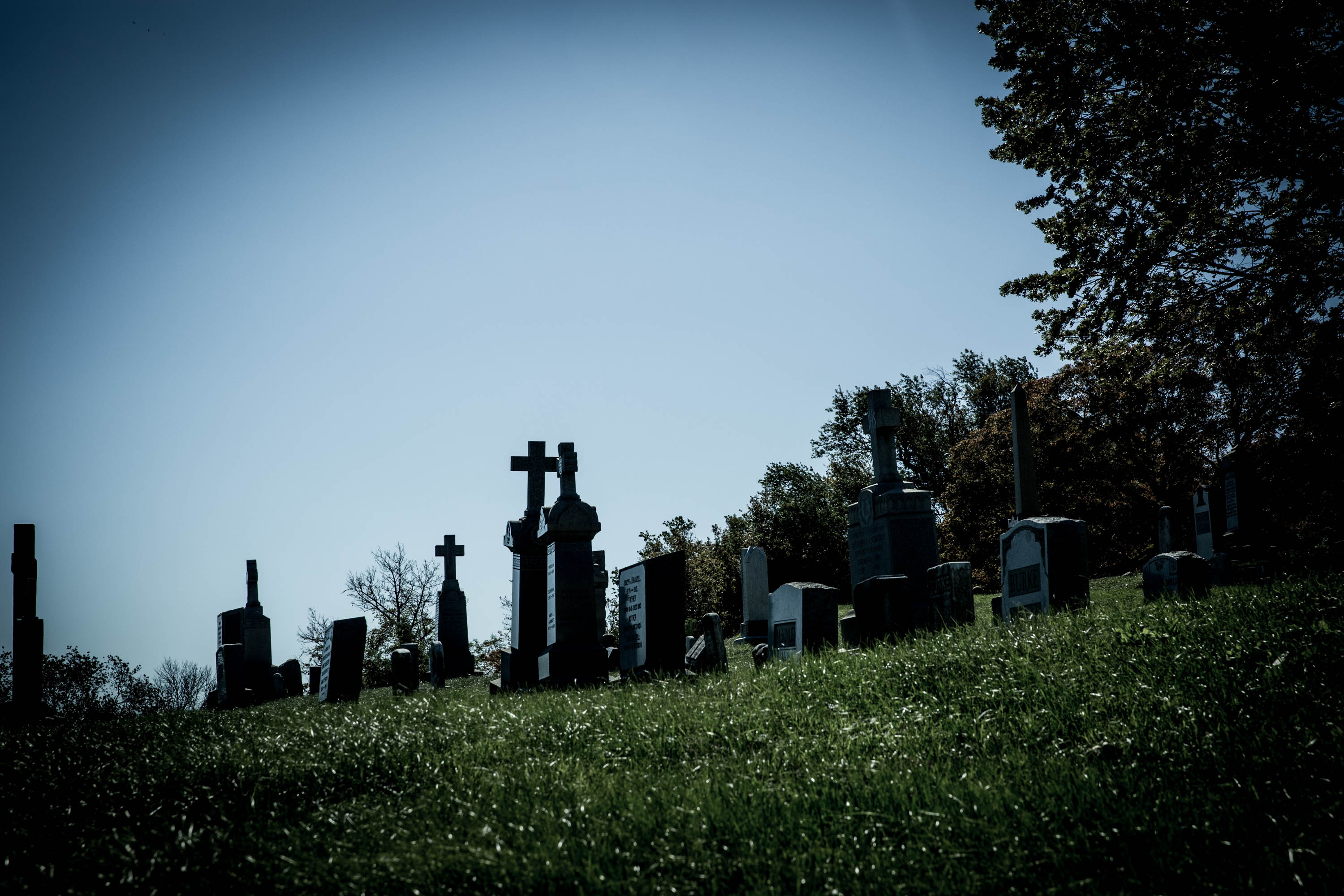 Haunted historians, would-be paranormal investigators and Halloween enthusiasts at the George Washington University are in luck: Washington, D.C., has more than its share of local ghost stories. For the Halloween season, GW Today rounded up the spirited history of some of the eeriest places in the nation’s capitol. Scroll down…if you dare. 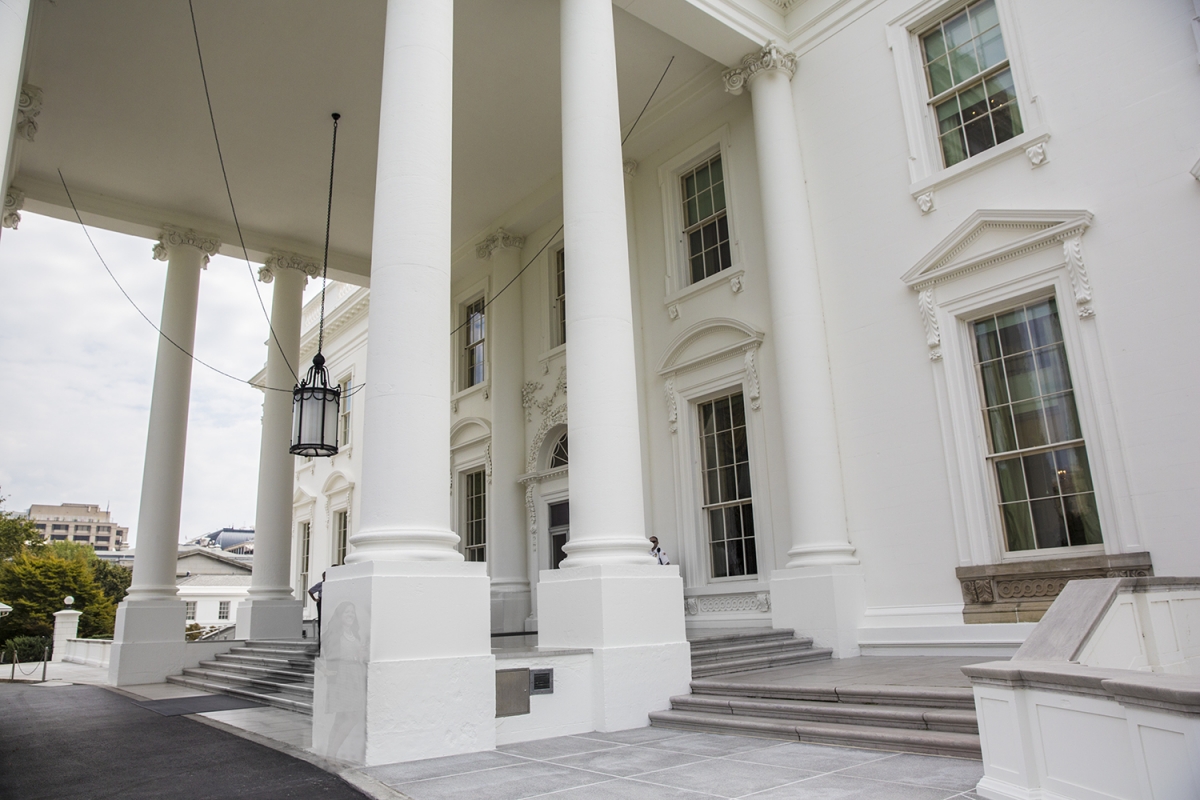 Reports of ghosts at the White House are legion. “The damned place is haunted sure as shootin’,” a creeped-out President Harry Truman wrote to his wife in 1946. Mary Todd Lincoln, an enthusiastic spiritualist, is said to have heard Thomas Jefferson playing the violin in the Yellow Oval Room and Andrew Jackson stomping and cursing in the Rose Room.

Even Hillary Rodham Clinton sometimes got the shivers there: “There is something about the house at night that you just feel like you are summoning up the spirits of all the people who have lived there and worked there and walked through the halls there,” she told Rosie O’Donnell in 1996. “It's neat. It can be a little creepy.”

The White House’s most well documented phantom is Abraham Lincoln. First Lady Grace Coolidge reported seeing him gazing out the window of the Oval Office. Queen Wilhelmina of the Netherlands is said to have fainted upon sighting him on a visit in 1942. But Winston Churchill may have had the best—or at least the most vivid—Lincoln encounter. According to Mark Nesbitt in “Civil War Ghost Trails: Stories from America’s Most Haunted Battlefields”:

Winston Churchill, during his visits in the 1940s, never liked sleeping in the Lincoln bedroom… During one visit, after taking a hot bath (accompanied by a glass of scotch and omnipresent cigar) he emerged from the tub and strolled naked into an adjoining room where he ran right into Lincoln, who was leaning on the mantle above the fireplace. They looked each other in the face. Churchill was embarrassed. Lincoln simply vanished. 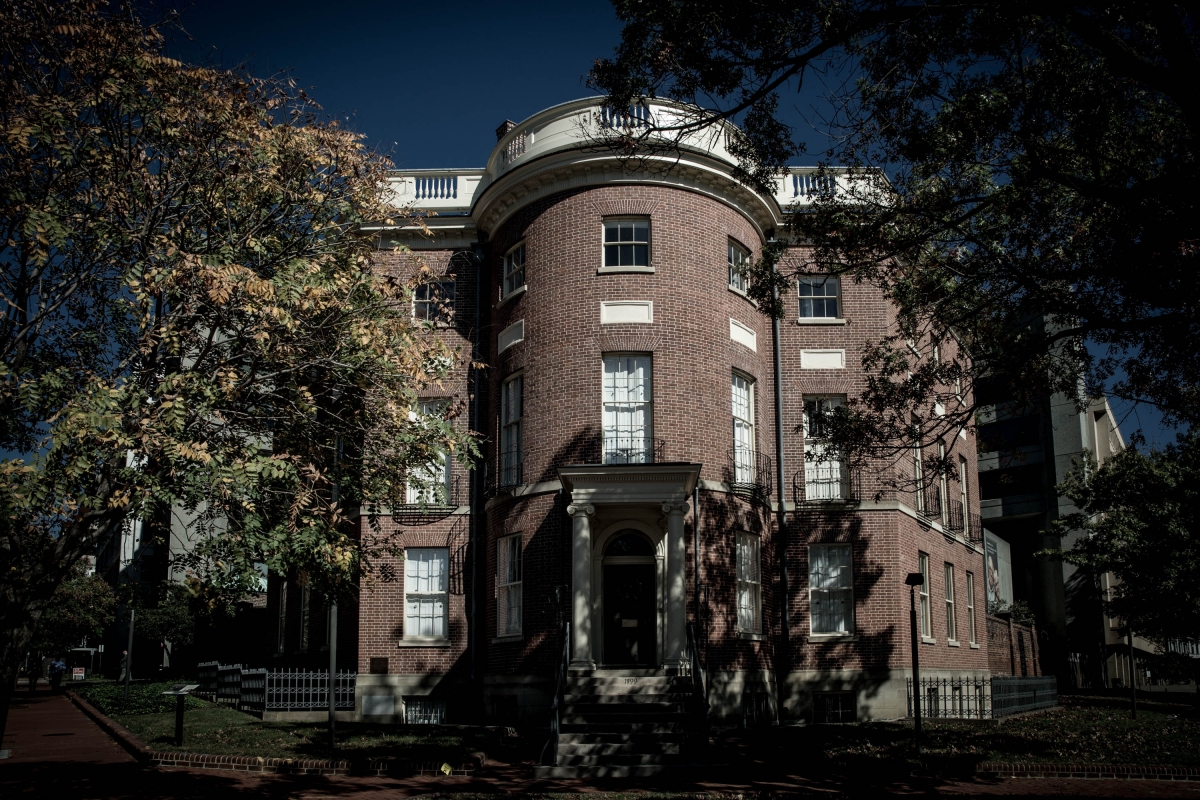 In spite of its name, the Octagon House and Museum does not have eight sides. It has eight angles—enough to classify it as an octagon in the parlance of its time—and a circular center room built on an octagonal shell. (Logan Werlinger/GW Today)

“The Octagon House has long had the reputation of being haunted,” author and socialite Mary Clemmer Ames wrote in 1873. This looming mansion, where James and Dolley Madison lived after the White House burned in the War of 1812, still retains its title as “the most haunted building in D.C.” Reported paranormal manifestations include poundings on the wall, floating spectral lights and the inexplicable jangling of servants’ bells: “It is an authenticated fact, that every night, at the same hour, all the bells would ring at once,” Ms. Ames wrote.

Unfortunately for would-be ghost hunters, historians have debunked the enduring legend that two members of the original builder’s family died in the house. But that’s no guarantee that they haven’t returned to walk its halls.

Commodore Stephen Decatur was a war hero and even a speculative presidential hopeful when he built this stately town house, the first private residence in the White House neighborhood. But only 14 months after moving in, he was challenged to a duel and killed. Two hundred years later, the spirit of Stephen Decatur is said to gaze out of a long bricked-up window on the second floor. Some report that empty rooms echo with the sound of a woman sobbing—a woman presumed to be the commodore’s grieving widow. 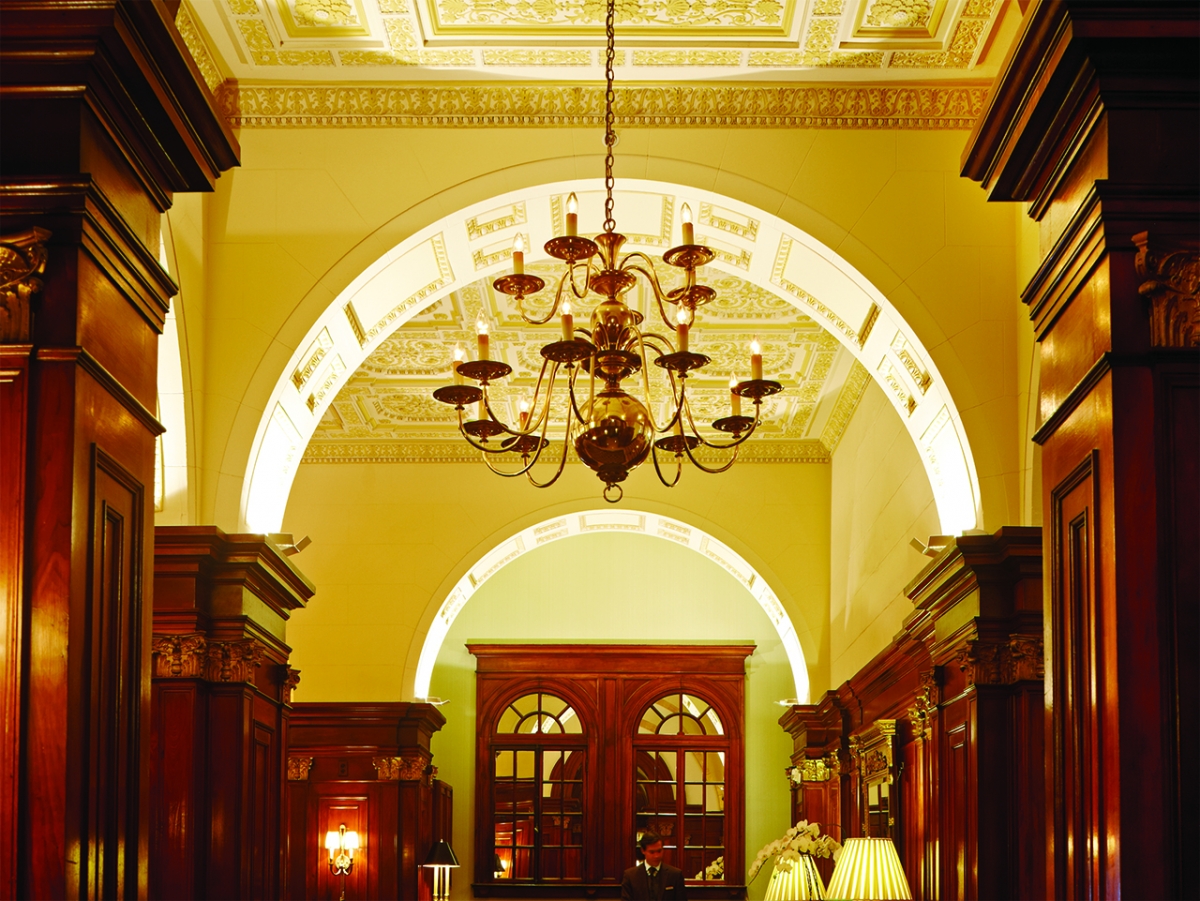 In its 100-year history, the elegant Hay-Adams Hotel has hosted luminaries from Amelia Earhart to Angelina Jolie. The Obama family stayed there prior to the 2009 inauguration. With living guests this distinguished, it’s understandable that staff are discreet on the subject of hauntings.

The hotel’s rumored apparition is Marion “Clover” Hooper Adams, a photographer who committed suicide using the darkroom chemical potassium cyanide at the age of 42. The chandelier at the entryway to the Hay-Adams Room is said to sway, and a scent of almonds—or cyanide?—supposedly lingers in the halls. 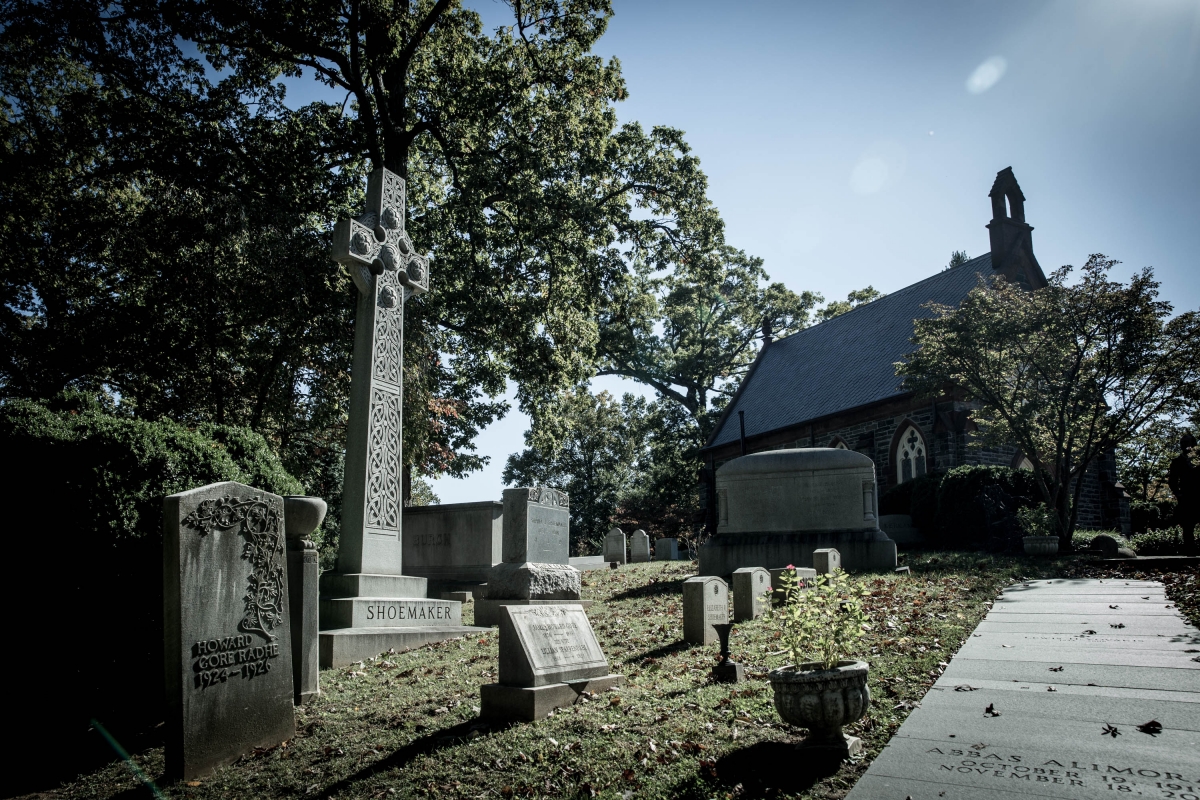 James Renwick, designer of the Smithsonian Castle and of St. Patrick’s Cathedral in New York City, built Oak Hill's cemetery chapel in 1849. According to the cemetery's website, it is the District's only example of his gothic revival ecclesiastical design style. (Logan Werlinger/GW Today)

Oak Hill Cemetery also is the setting of George Saunders' Man Booker Prize-winning "Lincoln in the Bardo." The novel centers on the ghost of Abraham Lincoln's 11-year-old son, Willie, who was briefly interred here before being moved to Springfield, Ill., after his father's assassination in 1865. 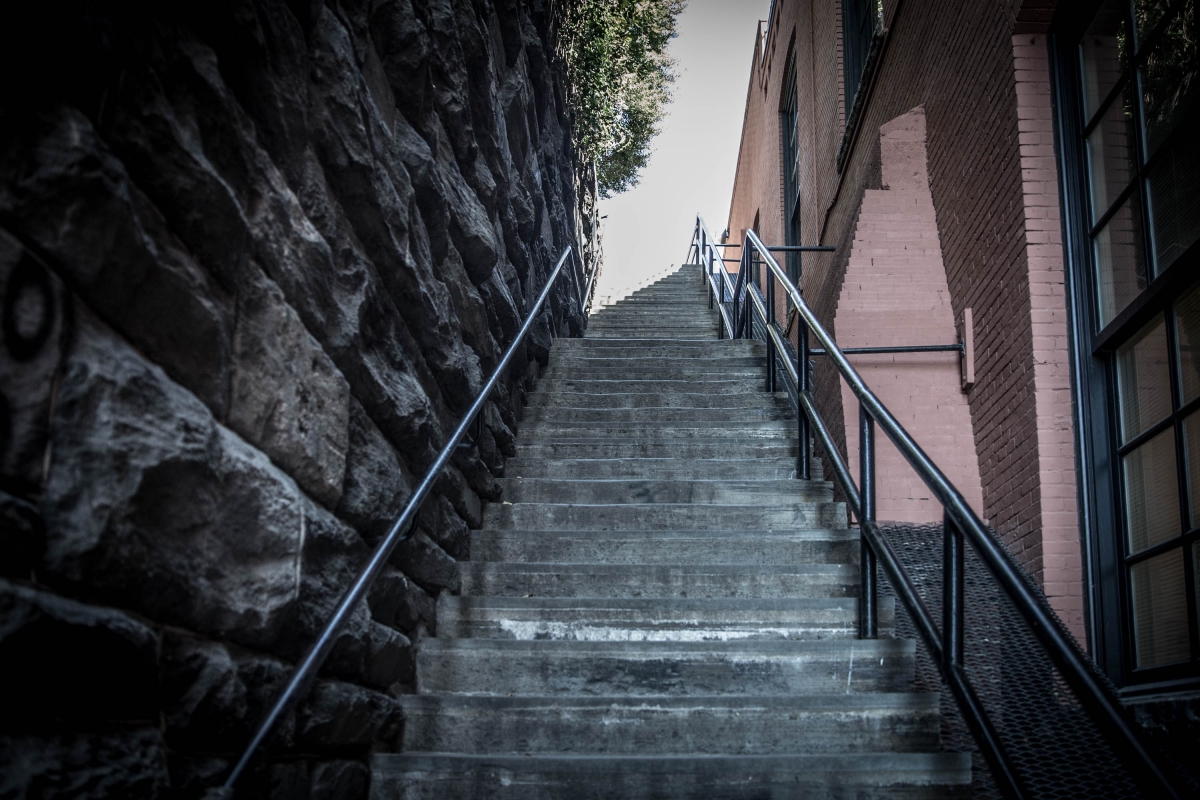 A major character meets his end on this precipitous stairway in the iconic 1973 film “The Exorcist.” Accordingly, it’s a pilgrimage site for horror fans—and athletes, many of whom get their cardio fix sprinting up and down a rise equivalent to the height of a five-story building. During filming, according to Elizabeth Tucker’s “Ghostlore of American College Campuses,” Georgetown University students charged would-be spectators five dollars to watch a stuntman fall down 75 steps (fortunately padded with half an inch of rubber). 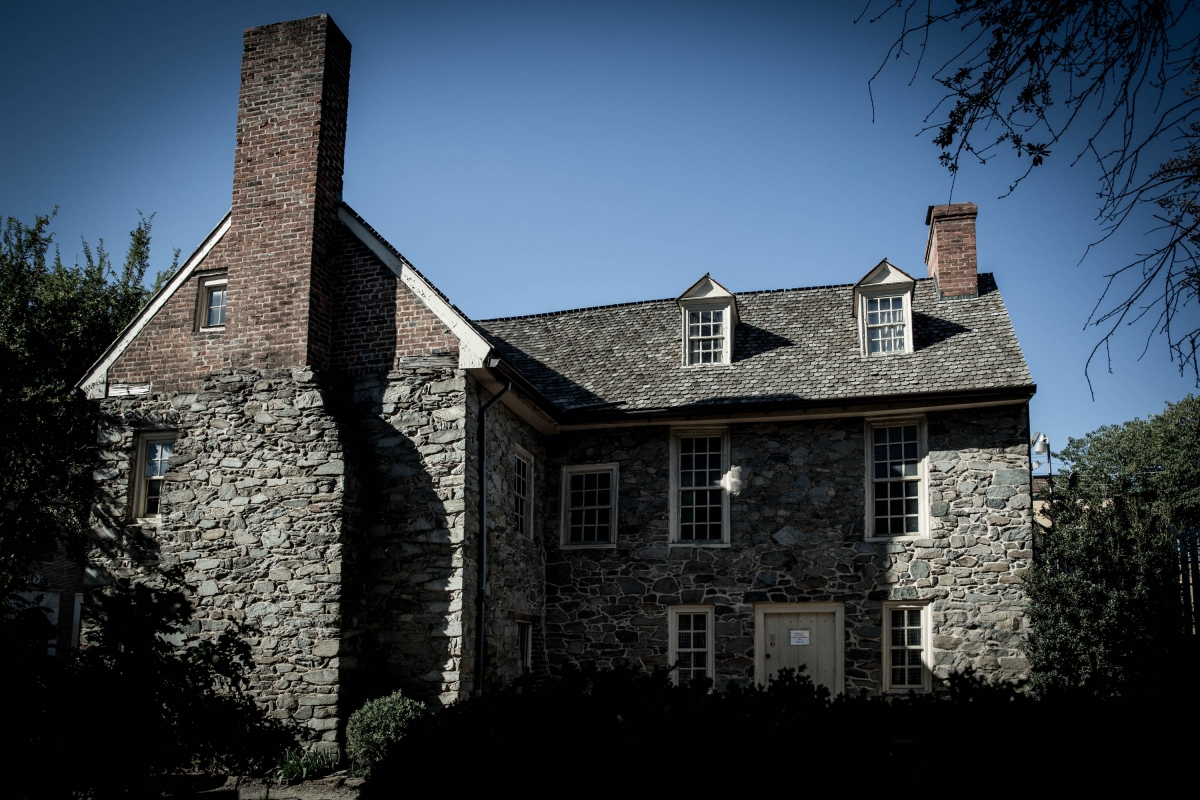 The Old Stone House was preserved only due to a historical mix-up: Residents believed it was an inn in which George Washington once stayed. In fact, it was the residence and shop of that innkeeper's son. (Logan Werlinger/GW Today)

The Old Stone House is the oldest structure on its original foundation in Washington, D.C., already 59 years old when the British invaded the city in 1814. Now renovated, it retains much of its original flooring, paneling and walls. The house’s age practically guarantees haunting rumors, and it doesn’t disappoint: There are at least 11 reported apparitions, including “a stout woman in an antebellum gown,” “a small boy named Joey” and “a German carpenter,” according to Dennis William Hauck’s “Haunted Places.”

The Old Stone House also is rumored to contain of one of D.C.’s few malevolent spirits. Known as “George,” it supposedly travels the third floor in an ominous cold spot and is said to have choked and pushed visitors. 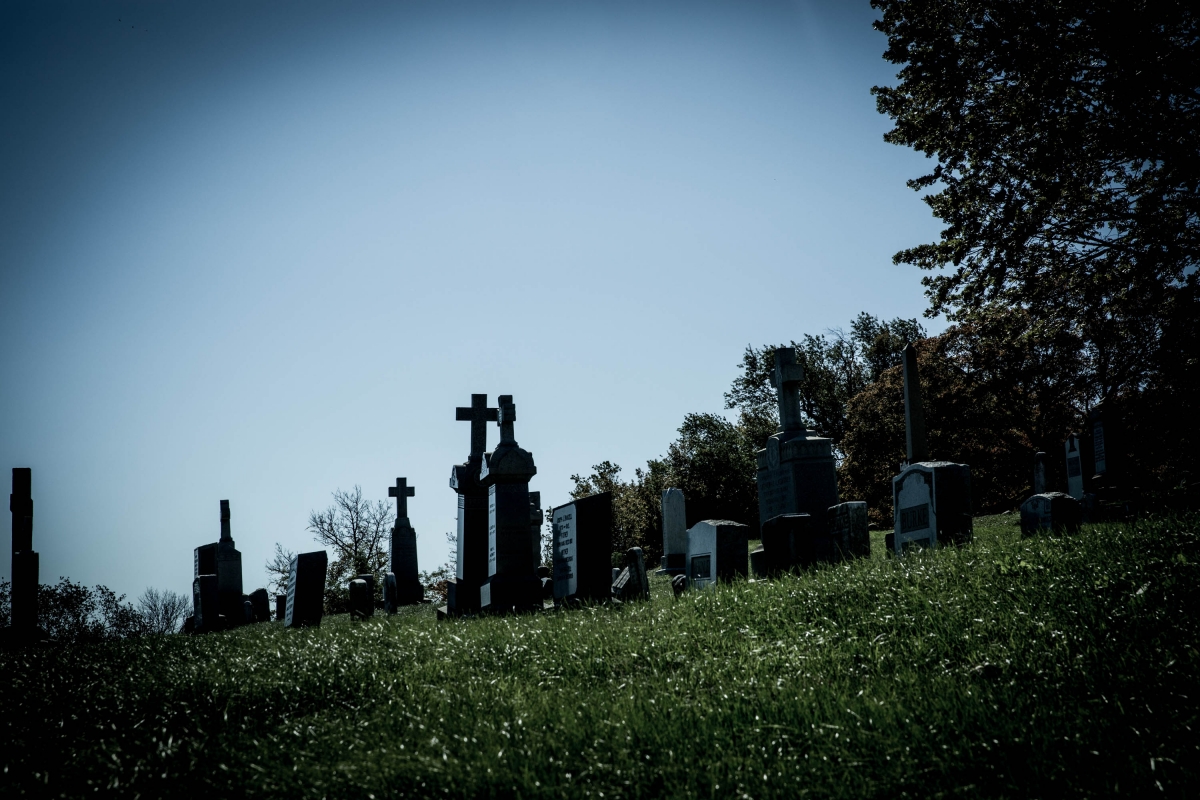 Holy Rood Cemetery contains about 7,000 graves, perhaps including as many as 1,000 free and enslaved African Americans. (Logan Werlinger/GW Today)

The 176-year-old cemetery now known as Holy Rood has fallen into disrepair, but remains one of Washington’s best-documented burial sites for slaves and free Catholic African-Americans. 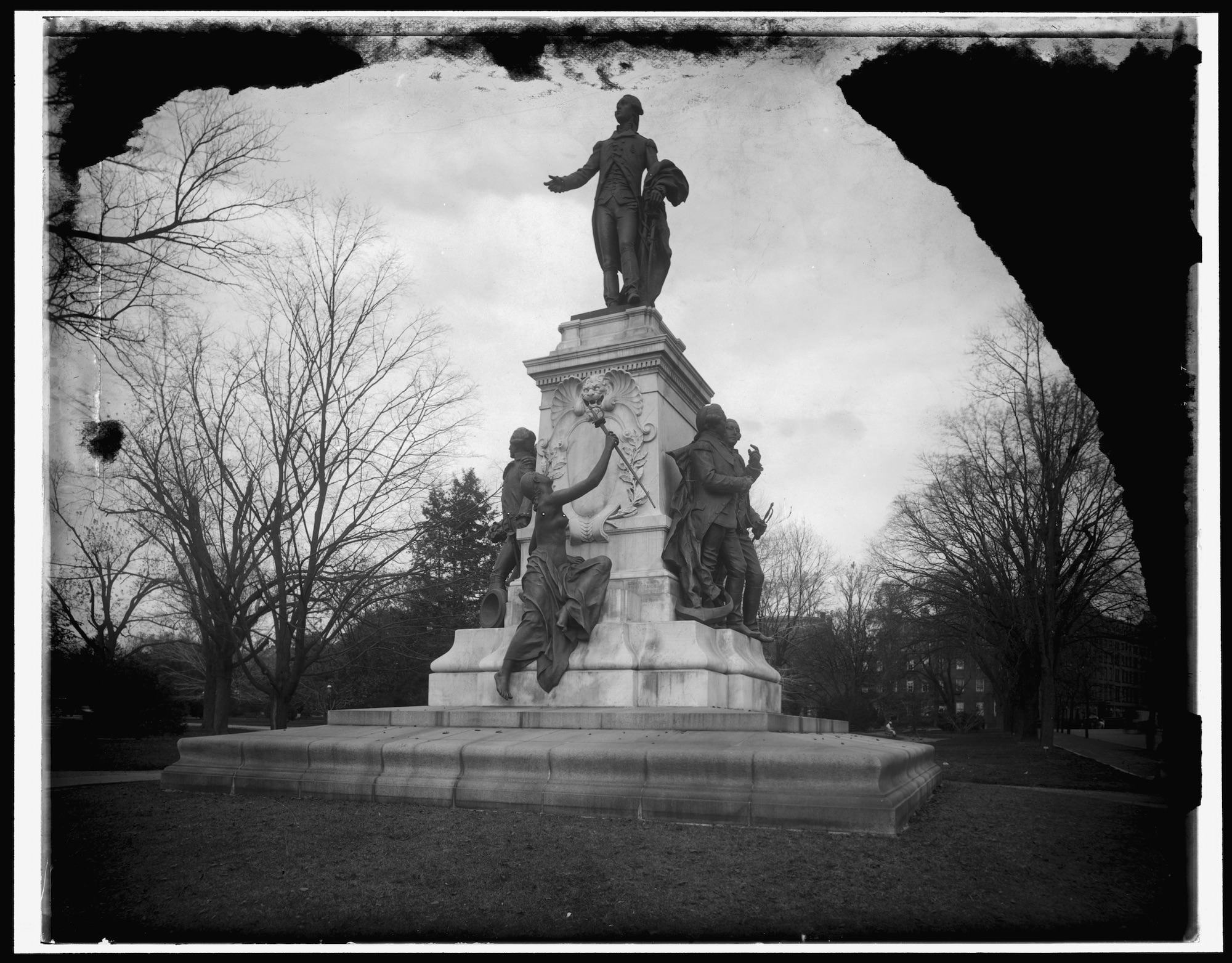 In the 19th century, Lafayette Square was famous as the site of one of America's first slayings by "temporary insanity." (Photo: Library of Congress)

These days Lafayette Square, directly in front of the White House, seems a more likely site for a protest than a ghost. But in 1859 the square saw one of D.C.’s most notorious slayings—committed in broad daylight by a sitting congressman.

U.S. Rep. Daniel Sickles (D-N.Y.) was notorious in his time for his extramarital dalliances. But when he discovered that his much-younger wife was having an affair of her own with Philip Barton Key, district attorney of the District of Columbia and the son of “Star-Spangled Banner” composer Francis Scott Key, he became enraged. According to a contemporary account, when Mr. Key passed the Sickles’ Lafayette Square house waving his handkerchief, Mr. Sickles—who believed his rival was making another adulterous overture—charged out and shot him twice.

Mr. Sickles’ was the first case in the United States to successfully use “temporary aberration of mind” as a defense. He would go on to a disastrous command at Gettysburg, where he went against orders, destroyed his battalion and lost a leg. (Cementing his reputation as one of the strangest figures in Civil War-era Washington, Sickles had his leg shipped to the National Museum of Health and Medicine in a small box with a card reading “With the compliments of Major General D.E.S.” The leg is still part of the museum’s collection.)

Philip Barton Key’s ghost, meanwhile, is said to appear in Lafayette Square between 15th and 16th streets, where he was shot. According to the National Directory of Haunted Places, the apparition revealed itself in 1865 to Secretary of State William Seward to warn him of an upcoming assassination attempt. 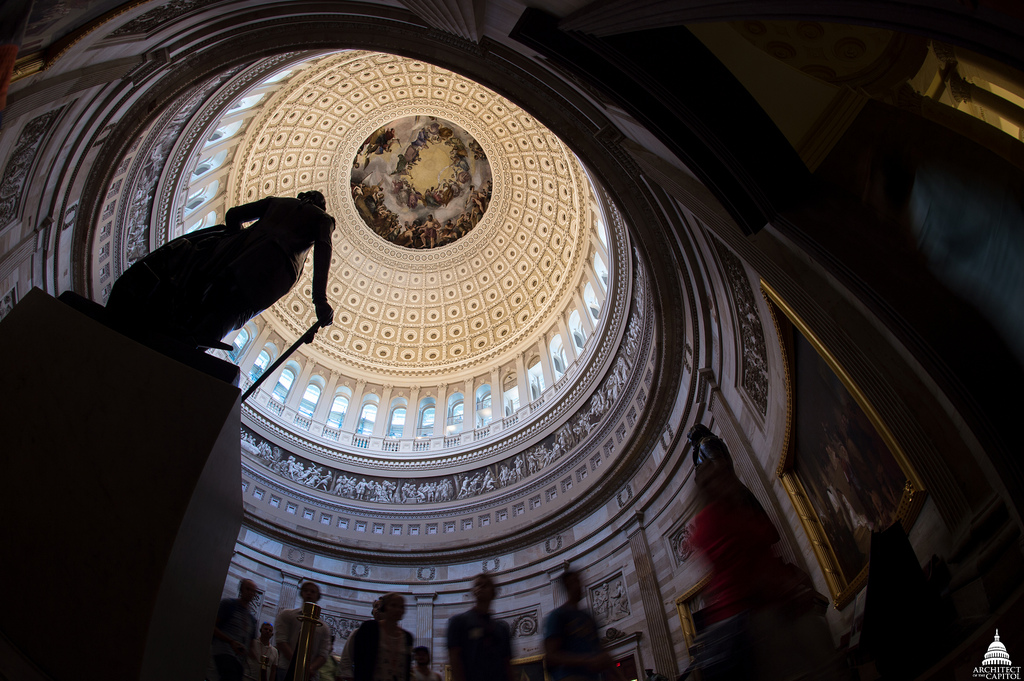 Among the numerous legends surrounding the Capitol is the rumor, attributed to a security guard in the 1890s, that the building's statues come alive and dance on New Year's eve. (Architect of the Capitol)

Like the White House, the Capitol has seen too much history to be free of speculation about ghosts.  Among its phantom inhabitants are said to be assassinated President James Garfield, architect Pierre Charles L’Enfant and John Quincy Adams, who had a stroke mid-speech on the floor of the House of Representatives and died two days later in an adjoining room. Capitol workers still report hearing him straining to finish the speech interrupted by his death.

Some of the Capitol’s specters aren’t even human. A “demon cat” supposedly prowls the 200-year-old building in times of national crisis, growing to enormous size and then vanishing.