An agreement with NASA will propel faculty and students from the GW Astrophysics Group to new heights in space exploration science.
December 7, 2021 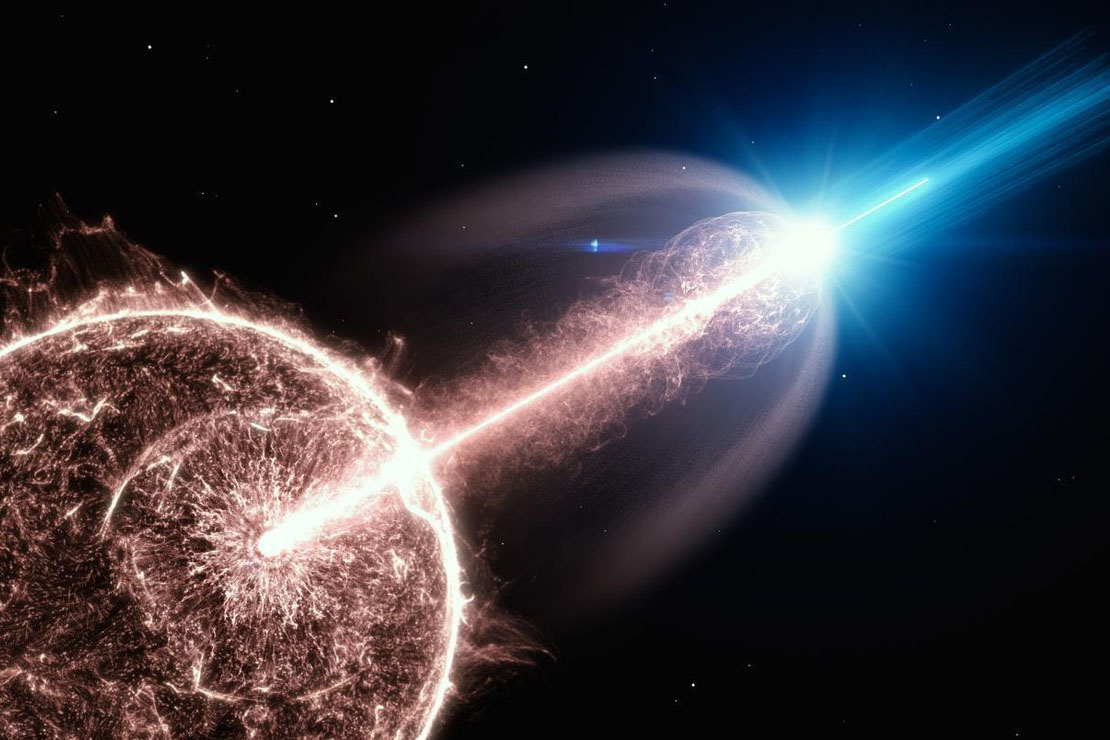 Under an agreement with NASA, the GW Astrophysics Group will expand on its expertise in areas such as gamma-ray bursts. The illustration depicts a gamma-ray burst’s jet from a collapsing hyper-massive star. (Credit: DESY, Science Communication Lab)

The GW Astrophysics Group within the Columbian College of Arts and Sciences (CCAS) is expanding its reach into space exploration with a new agreement with the NASA Goddard Space Flight Center (GSFC). The milestone partnership will open doors to a greater imprint for the CCAS Physics Department in space science.

The bilateral Space Act Agreement (SAA) formalizes a relationship that will promote CCAS faculty and student research at the Goddard Center outside of Washington, D.C., and propose new collaboration opportunities. GW researchers, many of whom are already leading projects at Goddard, will have enhanced access to lab facilities and equipment and will play a larger role in fields from data analysis to designing cutting-edge instrumentation. At the same time, GW will support NASA missions by teaming with Goddard scientists on new research projects with an increased emphasis on headquartering them at GW facilities. GW will also continue to organize NASA-related conferences and workshops on campus.

“The SAA is a recognition by NASA that GW is a strong and reliable partner with which they wish to establish a long-term partnership for exploring the cosmos as well as fostering new ideas,” said Assistant Professor of Physics Sylvain Guiriec, the principal investigator for the agreement.

“Goddard Space Flight Center is very happy to have a signed Space Act Agreement with the George Washington University,” said Anne Kinney, GSFC deputy center director. “We hope and expect that this agreement will lead to an exchange of expertise between GSFC and GW which benefits both parties. Such agreements serve as a path between organizations, allowing talent and expertise to flow in both directions.”

The Astrophysics Group has enjoyed frequent collaborations with NASA in the past, particularly in the field of high-energy astrophysics, Dr. Guiriec said. Faculty and student researchers have helped analyze and interpret data from, among other objects, cosmic explosions and gamma-ray bursts, playing a key role in “understanding the nature of the most energetic phenomena in the universe,” he noted.

Under the new agreement, Dr. Guiriec envisions GW leading the development of new astrophysics instrumentation, including the next generation of telescopes. “Being highly involved in the development of future instruments is a strategic key for our students as well as for the long-term sustainability of the GW Astrophysics Group’s activities,” he said.

Several CCAS physics faculty members have long-standing ties with NASA, including Dr. Guiriec, who is a research scientist at the Goddard Center, a member of multiple space missions and a 2017 recipient of the NASA Exceptional Scientific Achievement medal for his work on modeling gamma-ray bursts and establishing them as cosmological “standard candles”— astronomical objects that have a known absolute magnitude. Before coming to GW, Physics Department Chair Chryssa Kouveliotou was a high-energy astrophysicist at NASA’s Marshall Space Flight Center. A member of the National Academy of Sciences, Dr. Kouveliotou recently received the prestigious Shaw Prize in Astronomy for her contributions to advancing the understanding of magnetars. 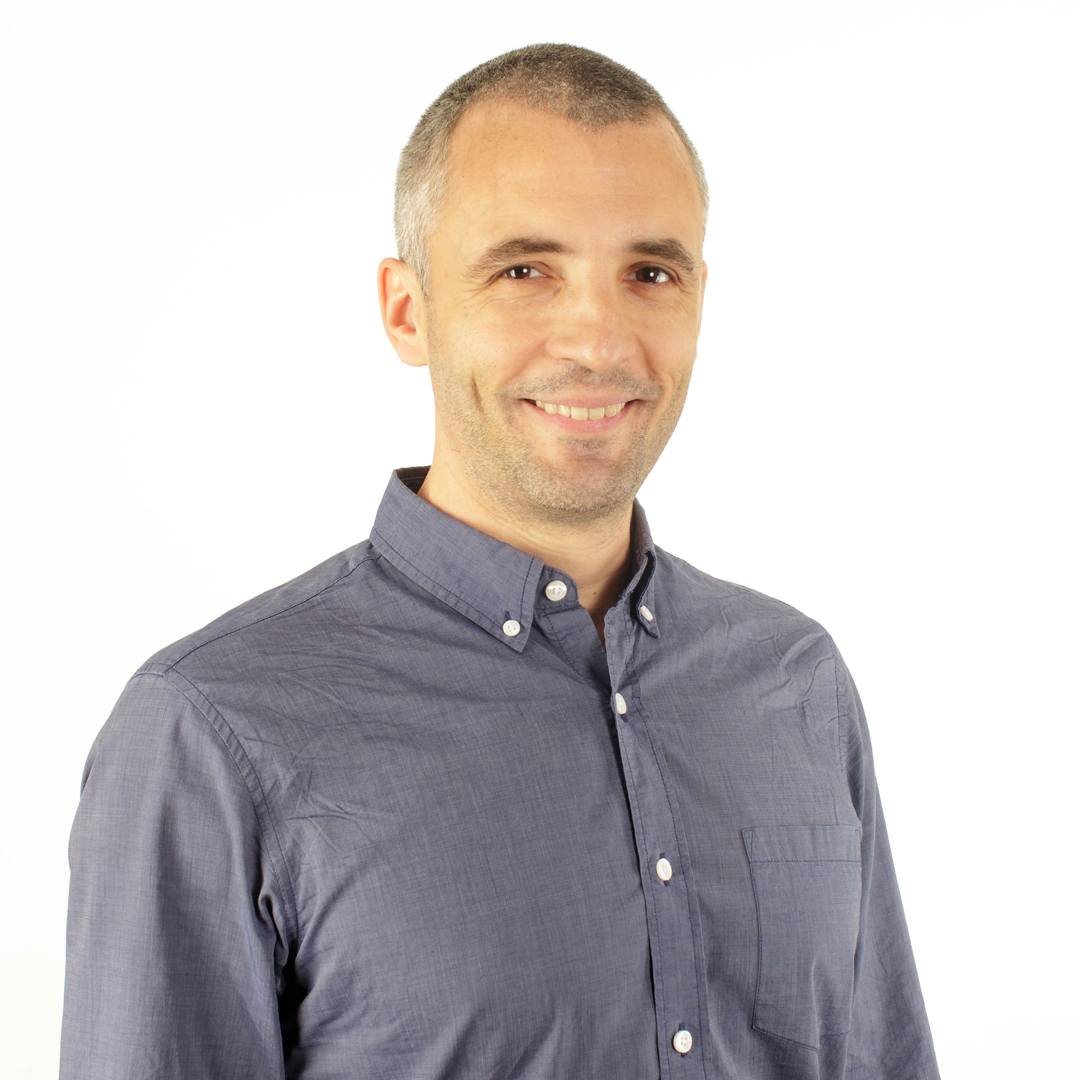 Earlier this year, Dr. Kouveliotou, Dr. Guiriec and Associate Professor of Astrophysics Alexander van der Horst joined a team of international researchers that helped NASA identify magnetar explosions in a neighboring galaxy. In recent years, CCAS astrophysicists have collaborated with NASA and scientists from around the globe for projects such as detecting the highest-energy light ever observed from a gamma-ray burst and studying the first confirmed observation of a kilonova, two merging neutron stars.

The new agreement will expand collaboration opportunities for both faculty and students, Dr. van der Horst said. “We can offer graduate students a broad range of high-quality Ph.D. research projects, which allows the Physics Department to attract more high-quality students, and the Astrophysics Group and others at GW to broaden and deepen collaborations with NASA.”

Currently, eight graduate students from the Physics Department are working at the Goddard Center, with several already leading important instrumentation projects. Fifth-year Ph.D. student Alyson Joens, recipient of the prestigious John Mather Nobel and NASA FINESST scholarships, is spearheading the calibration of the Burst Cube, a gamma-ray detection instrument that will be launched into space in 2022. Grant Mitchell, a fifth-year Ph.D. student, is the leader of the sun electron events analysis for the international Parker Solar Probe collaboration. He is also developing cutting-edge space detectors for studying neutrons at the sun. Third-year graduate student Nicholas Kirschner is a leader for the calibration of Goddard’s All-Sky Medium Gamma-ray Observatory (AMEGO) mission, a project aimed at unveiling an unexplored regime of the gamma-ray electromagnetic spectrum. Michael Moss, a fifth-year Ph.D. student, received the Chateaubriand Fellowship from the Embassy of France in Washington. He is currently working at the Institut d’Astrophysique de Paris, modeling gamma-ray bursts and developing an analysis pipeline for gamma-ray data across space missions. “I have the privilege to supervise these bright Ph.D. students who are fantastic ambassadors of the excellence of GW Physics Department at NASA Goddard,” Dr. Guiriec said.

“Working at NASA Goddard as a graduate student has afforded me the unique opportunity of leading a critical component of a mission while also learning from the foremost experts in the field,” Ms. Joens said.

With the SAA, Dr. Guiriec said faculty and students will be able to conduct similar NASA instrumentation projects at GW facilities. Meanwhile, Dr. Guiriec said both sides are eager to take the partnership into unexplored new missions. “It’s not only about continuing our work on existing projects, but also fostering new lines of research,” he said. “We will collaborate on even larger scales to take us beyond anything we have done before.”