Museum Countdown: A Look at Luxury Bridal Gown on Display

Japanese wedding dress can be viewed at the George Washington University Museum and The Textile Museum opening on March 21.
March 9, 2015 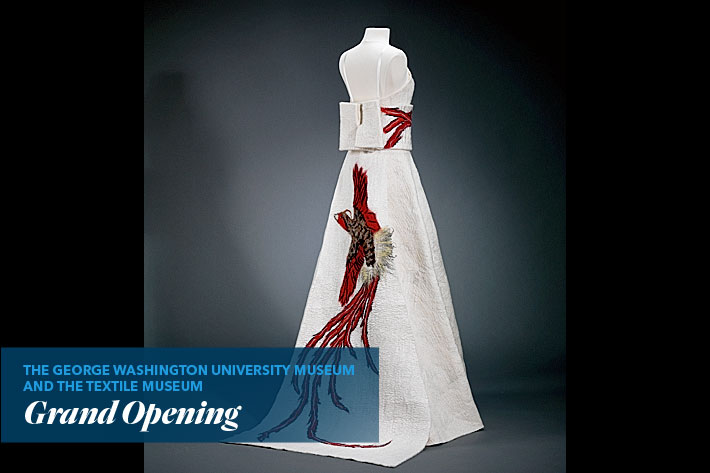 By Julyssa Lopez
As we countdown to the opening of the George Washington University Museum and The Textile Museum, GW Today gives readers a sneak peek at some of the objects that will be on display in the newest arts hub on campus.
Although Dutch artist Claudy Jongstra’s felt wedding dress attracts viewers with its chic, strapless neckline and cascading design of a flame-red phoenix, the gown represents more than just a glamorous aesthetic. Like many of the objects that will be featured in the new George Washington University Museum and The Textile Museum, the flowing ivory garment is layered with stories.
It tells narratives about transformation, and a woman’s journey into matrimony.
The dress will be displayed in “Unraveling Identity: Our Textiles, Our Stories,” the largest of three inaugural exhibitions that will premiere when the new museum opens March 21. The museum will be home to The Textile Museum’s world-renowned collections of more than 19,000 textiles dating to 3000 B.C. and Albert H. Small’s assemblage of a thousand maps, prints and other documents that chronicle the evolution of Washington, D.C.
Curator Lee Talbot explained that “Unraveling Identity: Our Textiles, Our Stories” celebrates The Textile Museum’s new home on the Foggy Bottom Campus. The show features more than 100 objects, including contemporary pieces that capture the full ubiquity of textiles in today’s world. One of the exhibition’s central goals was to highlight how clothing can transform an individual.
“The show is all about identity, and one of the main themes is how textiles express not only who we are, but also who we are becoming,” Mr. Talbot said.
When the exhibition opens, Ms. Jongstra’s dress will be displayed alongside a traditional Japanese wedding kimono from the museum’s collections. Made in the 1930s, the kimono epitomizes women’s fashion in Japan during that era. The robe was heavily tailored to hide the contours of the bride’s body, wrapping her so tightly that she’d become a lithe, upright column. Thick wads of fabric would have hidden most of her curves and covered her skin.
But Ms. Jongstra’s gown hints at a revolution of sorts. Seventy years passed between when the kimono was in vogue and when Ms. Jongstra created her take on bridal couture. During that time, Japan’s post-World War II ties with the U.S. resulted in Western influences making its way to the country’s culture—and fashion.
Ms. Jongstra made her high-end dress for a Japanese client in 2000, and its design represents how attitudes toward the body have changed. The delicate frock is cut up into a strapless style—revealing the shoulders, arms and lower back—suited for modern brides of today. Where Japanese society once dictated that voluminous silks should hide a woman’s figure, Ms. Jongstra’s dress suggests a shift toward embracing the female form.
Still, despite its forward-thinking style, Ms. Jongstra’s dress doesn’t forget to pay homage to Japanese traditions. The center of the dress curls into an obi—the waist sash worn with kimonos—and boasts the decorative imagery of a phoenix, an auspicious symbol of good luck in Japanese culture. Mr. Talbot explained that in Western stories, the phoenix bursts into flames and rises from its own ashes. The fables of rebirth and regeneration made the gown dually appropriate for an exhibition highlighting transformation.
The dress drew attention when it debuted to public audiences during a show in Milan. Mr. Talbot said the museum was especially eager to display a bridal gown because of the transformative nature of weddings—and Ms. Jongstra’s example offered a breathtaking, intricately made example.
“Like this dress shows, people around the world have come up with textile forms that visually convey the rites of passage humans undergo in their daily life,” Mr. Talbot said.