Panel of CNN political reporters shared analysis of the elections and advice for students interested in journalism.
November 13, 2022 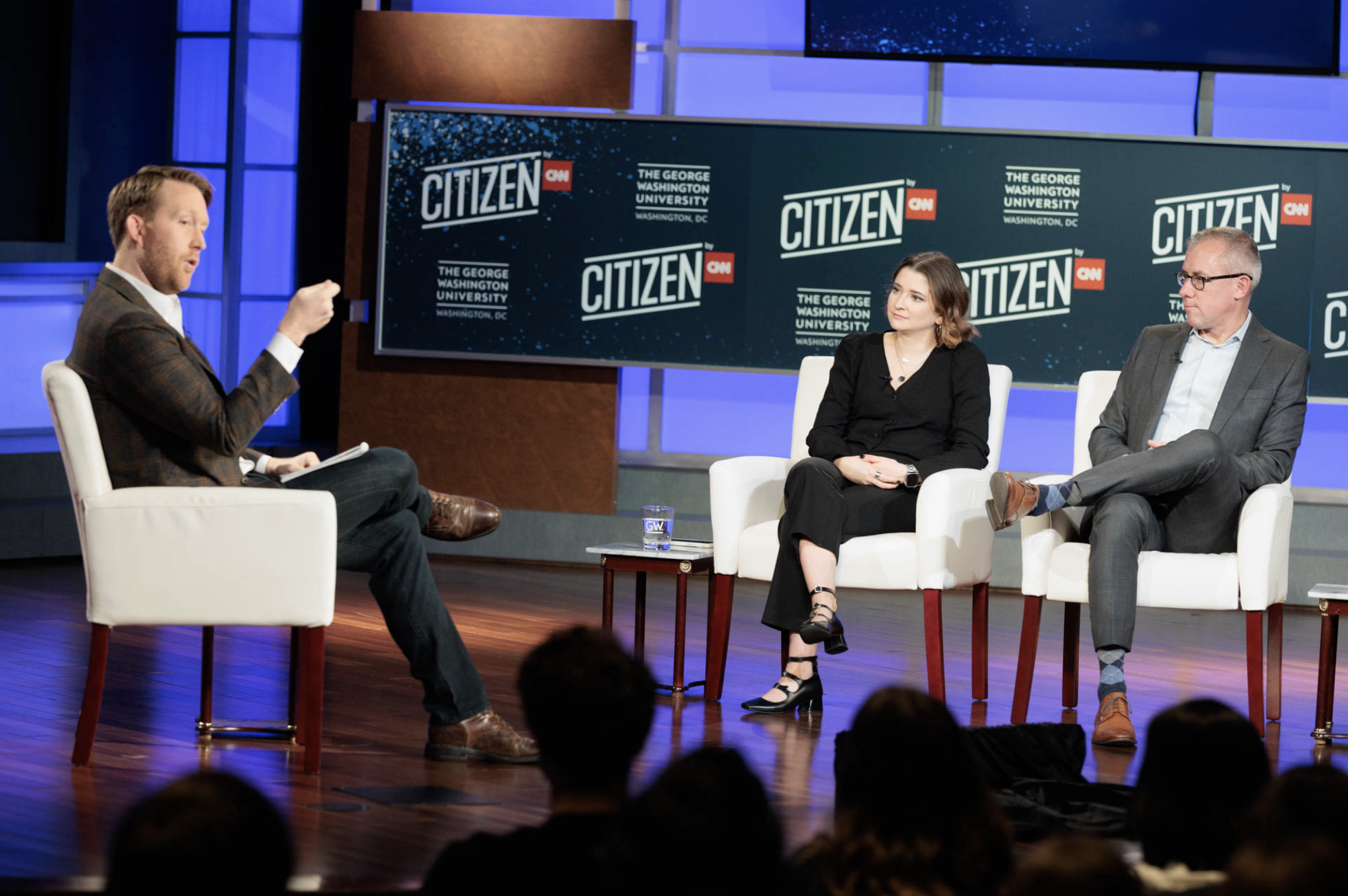 For members of the George Washington University community interested in politics, journalism or both, there was no better place to be Thursday evening than at the last of the fall semester’s Citizen by CNN event, a series held in partnership between GW and CNN as an expansion of the cable network’s civic engagement platform.

After welcoming the crowd, GW President Mark S. Wrighton said that the event was helping the university fulfill its mission of teaching, research, patient care and service.

“Through the Citizen by CNN series,” Wrighton said, “we are helping to inform the public, facilitating discourse and exchange of differing views on critical issues and giving our students access to leaders who are shaping our world today.”

Wrighton said he had previewed some of the questions submitted by audience members and been favorably impressed, and that the CNN correspondents shared that view. He noted that a number of GW alumni had stood for election in midterm races, and that more than 10 alumni are currently serving in the House or Senate.

“We have an engaged community that continues to have a positive impact on the world,” Wrighton said, “regardless of a current year’s election outcomes. I hope that tonight’s event will help inform the ways we can all continue to be involved and make a difference.”

The journalists kicked off the hour by discussing the Georgia race for the U.S. Senate between Democrat Raphael Warnock and Republican Hershel Walker. Neither candidate received at least 50 percent of the votes, which means that under Georgia law, the contest will be decided in a runoff election in December. At the time the discussion was held, results were still pending in two other Senate races, in Arizona and Nevada, and it wasn’t yet known if the Georgia runoff will determine whether the Senate majority leader will be Mitch McConnell (R-Ky.) or Charles Schumer (D-N.Y.).

“Even if control of the Senate doesn’t hinge on Georgia, it is still going to be an all-in effort,” Zeleny predicted, citing both Republican and Democratic sources. (In the days following the panel discussion, races were called for the Democratic candidate in both Arizona and Nevada, meaning that Democrats will retain control of the Senate.)

Analyzing why the predicted “red wave” of Republican electoral success did not materialize, panelists cited several factors, saying concerns about abortion and the U.S. Supreme Court’s recent reversal of Roe v. Wade, combined with worries about election denialism and other threats to democracy, prevailed over fears of crime and inflation.

“I’ve thought a lot about why the red wave didn’t happen” Merica said. “Part of it is that voters are just complicated.” He reminded listeners how voters sometimes split their ticket, choosing candidates who have little in common with each other, such as Arizona voters who preferred Democrat Mark Kelly for the U.S. Senate but also voted for Republican Kari Lake in the governor’s race. It’s also true that some issues, such as reproductive rights, drive higher voter turnout than others.

“Voters are incredibly complicated,” Diaz agreed. “You can’t predict anything, and every time that we try, when we think we know what’s going to happen, we turn out to be wrong.” She reminded the crowd of Donald Trump’s surprising victory in the presidential election of 2016.

Some Republicans, Zeleny said, blame Trump for their disappointing electoral results, citing widespread concerns over his policies and style. Merica concurred, adding that several candidates who were tied to Trump lost.

“Never mind the fact that he’s under investigation,” Zeleny said. “His base still absolutely supports him without question, and they always will, but it is not the lion’s share of the Republican Party, necessarily.”

As populations shift, the political map changes along with them. The panel discussed how Florida, once considered a battleground in presidential elections, is no longer quite so decisive. Georgia and Arizona are two examples of battleground states that have recently emerged as such. Diaz said she would also categorize Nevada as a battleground state, but not her native Texas.

“In the end, it’s still a red state,” she said, pointing to the electoral defeat of Democratic gubernatorial candidate Beto O’Rourke.

The panel touched on several other topics, including Democrat John Fetterman’s victory over Republican Mehmet Oz in the Pennsylvania Senate race, and the difficulties that the Biden White House might face under Republican control of the House. Assuming Kevin McCarthy becomes the next Speaker of the House, they agreed, he, too, is likely to face significant challenges—from his most conservative members such as Marjorie Taylor Greene.

Other topics discussed included the power of the youth vote (in Florida, 25-year-old Maxwell Alejandro Frost was elected as a Democratic representative to the U.S. House). The panel also considered Trump’s possible run for the White House in 2024, as well as other potential presidential candidates, such as Kari Lake and Ron DeSantis, who could try to win the Republican nomination. On the Democratic side, all indications are that President Joe Biden will run for reelection, though Michigan’s governor Gretchen Whitmer was also mentioned as a possible candidate.

The panel concluded by offering advice for young people interested in getting into politics, as a journalist or in other ways.

“The best advice I got was to be open to the people you’re talking to,” Merica said, “to listen to them and to hear their stories, because you’re going to be surprised by what you hear.”

Diaz recommended saying “yes to everything.”

“Even if something scares me, I say yes to it,” she said. “And do as many internships as possible! What really is going to help you is where you worked during college. You’re in D.C., so you should have the best internships ever.”

Zeleny agreed on the importance of internships, but stressed that when one door closes, another opens.

“Always look for opportunities that don’t necessarily present themselves,” he said. “Be open to things. Save the cynicisms for other people. Our craft has changed tremendously since I’ve been in the business, but one thing that hasn’t changed is that we still tell people’s stories.” And his advice is the same for would-be political operatives, he added.

“Go get it—it’s a great world out there,” he concluded. 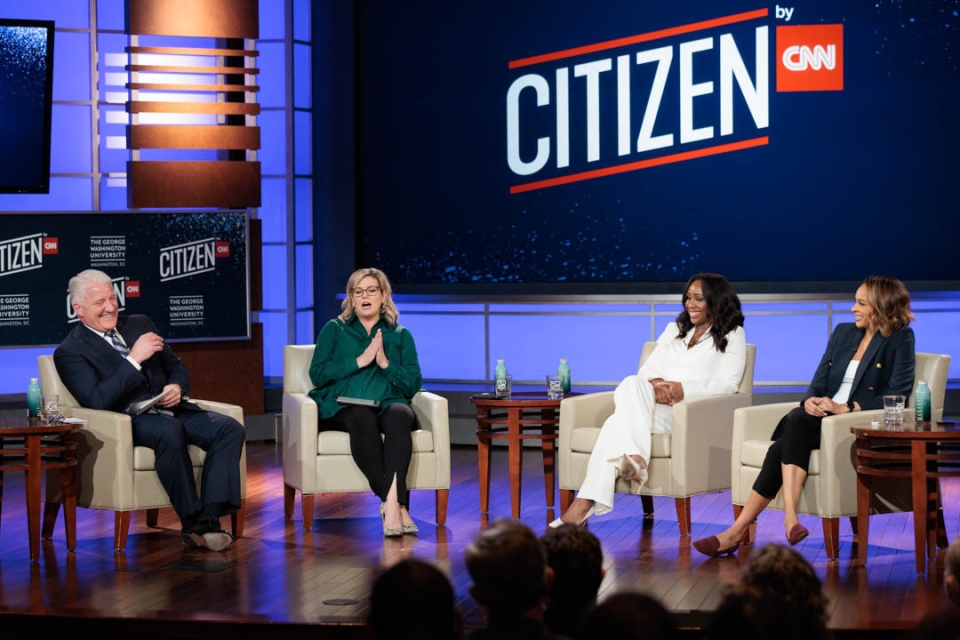