The position is part of Justice’s ongoing efforts to combat extremism in the United States.
October 16, 2015 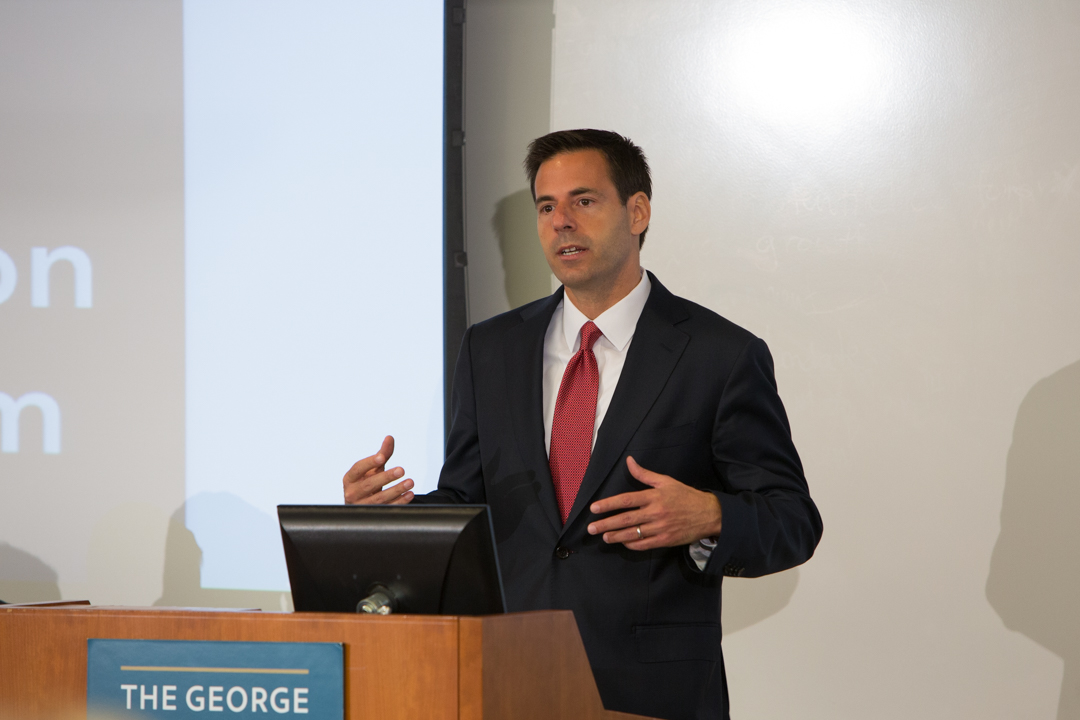 By Julyssa Lopez
The Justice Department has created a new position to coordinate responses and handle cases related to domestic terrorism, Assistant Attorney General John P. Carlin announced Wednesday at the George Washington University’s Elliott School of International Affairs.
Mr. Carlin said that the new position, a domestic terrorism counsel, will coordinate investigations and identify strategies to combat homegrown violence. Additionally, the counsel will be the main point of contact among U.S. attorney offices.
His announcement came at an event sponsored by the GW Center for Cyber and Homeland Security’s Program on Extremism. Lorenzo Vidino, director of the GW Program on Extremism, and Heidi Beirich, director of the Intelligence Project at the Southern Poverty Law Center, moderated a discussion following Mr. Carlin’s remarks.
The domestic terrorism counsel is one of the ways the Justice Department is responding to extremists in the United States. Mr. Carlin explained that although threats from Al Qaeda and ISIL are a danger in the United States, more people have died in attacks by domestic extremists harboring anti-government views, racism, bigotry, anarchy and other hateful beliefs. He cited examples such as the 1995 Oklahoma City bombing and the recent mass shooting at the Emanuel African Methodist Episcopal Church in South Carolina.
“We have not lost sight of the domestic terrorism threat posed by other violent extremists,” he said. “Terror and extremism do not always originate elsewhere or take place outside our borders.”
Mr. Carlin said that as the Justice Department has shaped deterrence and disruption strategies to stop violence, it has noticed several alarming trends in cases of extremism. First, there is the prevalence of “lone offender” attacks driven by individuals who act without a terrorist network. Second, there have been cases of people who become radicalized after encountering hate-filled views over social media.
Mr. Carlin said the government is responding to these cases by communicating closely between investigations and prosecutions, improving coordination strategies and collaborating with communities and local networks. An executive committee that former Attorney General Janet Reno convened in response to the Oklahoma City bombing has been revitalized. The group meets regularly and provides a forum to discuss violence prevention strategies.
Members of the community—including parents, coaches and mental health professionals—also play a role in violence prevention.
“Community members are not only best positioned to intervene with those on a path towards violent extremism, they also may be the first to see potential steps towards radicalization to violence,” Mr. Carlin said.
He added that the Department of Justice is working with communities in Minnesota, Boston and Los Angeles to develop pilot programs focused on dialogue and youth programming.
“We must always seek new and innovative ways to protect our national security in the face of evolving threats, while preserving our civil rights and civil liberties,” Mr. Carlin said.