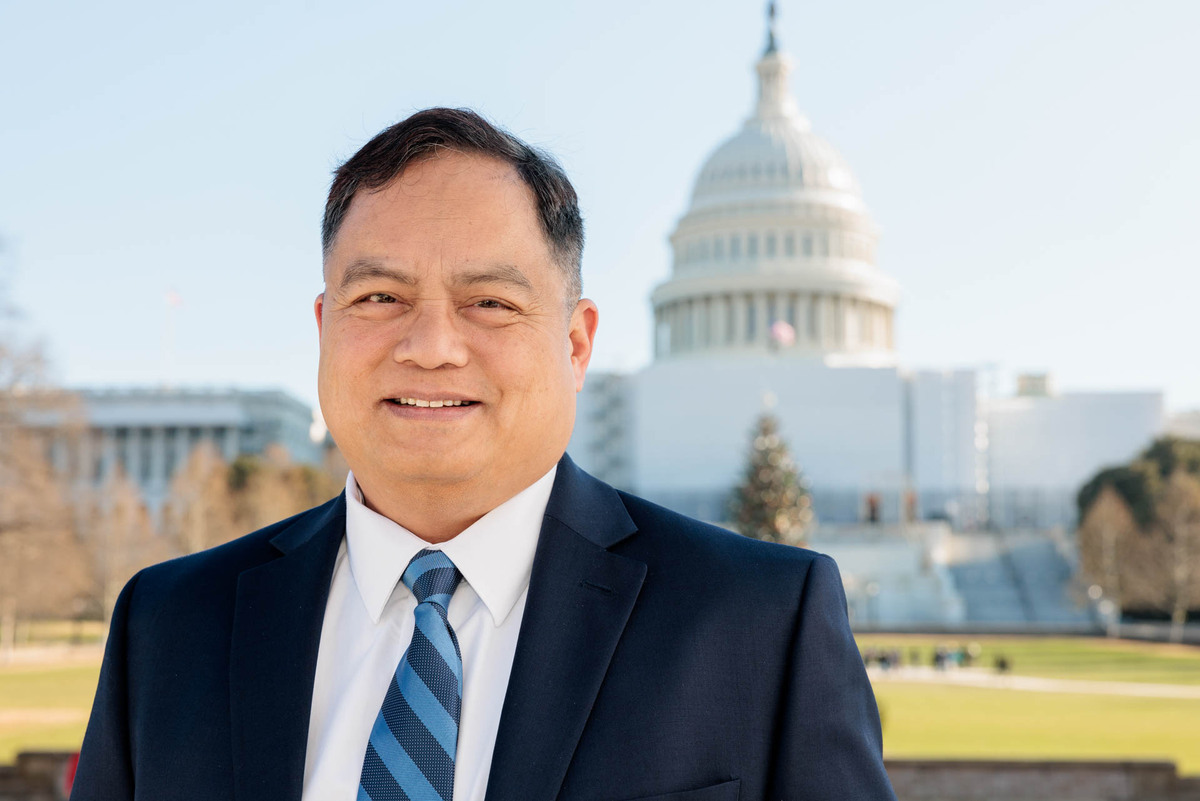 On a brisk December morning 100 years later, with the water beginning to freeze in the Capitol Reflecting Pool that Grant—perched on horseback—overlooks, a man with a camera and thirst for knowledge approached Alan Orquiza, B.A. ’92, a lieutenant for the United States Capitol Police Senate Division who happened to be off duty and standing by the statue at the time.

“Excuse me,” the man asked in detectable German dialect. “Which president is this?”

Orquiza, who has been with the U.S. Capitol Police since 2000, happily answered “Grant” in English before transitioning to fluent German for a follow-up question. After a quick double-take, the man answered back in German, prompting a short conversation between the two in the tourist’s native tongue.

It’s that part of the job that has kept Orquiza coming back every day for 22 years. He relishes the opportunity to work with, interact and help people on the Capitol grounds from all backgrounds and cultures, which are skillsets with deep roots at George Washington University, where he studied from 1988 to 1992.

“It makes it worthwhile,” said Orquiza, who majored in international affairs while minoring in German and literature. He became interested in law enforcement after internships at GW that included the U.S. Department of Justice, the Office of Special Investigations Criminal Division and the Asylum Policy and Review Unit at the Office of Policy Development—but he has held on to his international affairs origins. “Everybody has different walks of life and different cultures, and I’m just curious. I love to interact with different stakeholders, staffers, members of Congress and everyday people.”

It’s easy to see why he’s someone people naturally gravitate to with a question during their visit to the Capitol. He’s personable and clearly loves his job. “You have to have an interest in the field you want to go into,” he says. After time at the Grant statue on that December morning, Orquiza continued to share his knowledge of and experience with the building. He’s a walking encyclopedia of the iconic domed home for the federal legislative government.

He pointed toward Constitution Avenue and reminisced about the six presidential inaugurations he’s worked. He made note of the restoration project to the building’s west side, which will preserve its historic architecture. He approached the Peace Monument just adjacent to the reflecting pool, explaining how it’s a memorial to fallen sailors. Then, he paused before looking down Pennsylvania Avenue from, ironically, the Peace Monument.

“That’s where the first breachers came from.”

There was no need for him to clarify. Because on Jan. 6, 2021, democracy faced its largest internal threat since Grant accepted Confederate General Robert E. Lee’s surrender at Appomattox Courthouse in April 1865. On that fateful day two years ago, President Donald Trump summoned his most ardent supporters to D.C. to protest the outcome of the 2020 U.S. presidential election. Thousands obliged.

But as far Orquiza was concerned, throngs of people have always exercised their First Amendment rights in Washington. Since joining Capitol Police in 2000, he’s seen anti-war movements, women’s marches, Occupy Wall Street, pride marches and Black Lives Matter rallies attract huge scores of demonstrators. When he went to work on Jan. 6, he knew there’d be a crowd but figured it wouldn’t be anything he hadn’t seen before.

Then, on his radio, he heard the news he didn’t think was possible: The Peace Circle had been breached. “That’s when we kicked it into overdrive,” he said.

As a lieutenant, Orquiza leads a platoon of about 40 officers. Already outfitted in riot gear, they headed for the lower west terrace to a scene now made famous through hundreds of images and videos. At the time he found it almost unreal, likening it to the Cirque du Soleil as people were climbing and scaling the walls.

He didn’t have much time to think. As he got to the scene, a metal rod came zinging past his protective helmet as an angry protester turned rioter had thrown a piece of scaffolding that was, ironically, being set up for President Joe Biden’s inauguration two weeks later. Then, a frozen water bottle slammed into the back of his leg and bruised his calf. Before he knew it, a fellow officer was struck with an object so hard his helmet flew off. Orquiza, who still doesn’t know the identity of this officer, picked up his comrade and led him to safety before going back to defend the line.

It could only hold for so long. The barricades became no match for the increasingly hostile crowd with sights set on the House and Senate chambers, where the Electoral College vote was taking place to confirm Biden’s November victory over Trump. People broke through en masse to object the vote and cause difficulties for anybody who got in their way, including Capitol Police officers.

“That’s when everything sort of went into slow motion, but at the same time, you had to go into this tunnel vision,” Orquiza said. “I think it’s where your survival mechanism kicks in. Your fight or flight. You have no time to be afraid of anything.”

Because he accounted for 40 officers, Orquiza was on double-duty during the chaotic period from when the first police line was rushed at 1:50 p.m. to when the police and the National Guard retook control and established a perimeter at 6:02 p.m. Not only did he honor his oath by protecting those inside the Senate at all costs, but he also made sure his platoon members were accounted for and safe.

He ended up triaging officers not even in his own platoon in the Crypt of the building, where police officers and intruders engaged in a standoff during the early parts of the breach. He made sure officers were getting proper medical treatment and retrieved weapons for those who needed to go to the hospital. He accounted for equipment lost and filed paperwork for replacements.

“I was doing a bit of everything,” he said.

Orquiza stayed on until 3 a.m. that night and reported to work immediately the next morning. In the days and weeks that followed, he deputized National Guard members who were deployed to the Capitol. The only other time uniformed troops were called to action at that spot was during the Civil War.

But just as the Union did despite unimaginable obstacles during the time of secession, democracy ultimately prevailed.

Most of his platoon members came out either OK physically or with minor injuries. One, he said, suffered a severe head injury that had them working in a limited, administrative capacity for nearly a year before returning to regular police duty. He’s proud of their actions for doing everything in their power to defend the Capitol. So are others. A month ago, on Dec. 6, Orquiza and fellow Capitol Police officers and Metropolitan Police officers received the Congressional Gold Medal, the highest honor Congress awards to civilians, for their actions on what is now considered an infamous day in U.S. history.

“The sound of blood-curdling screams, the smell of gas and smoke, all remain raw,” then House Speaker Nancy Pelosi (D-Calif.) said at the ceremony. “Yet that day, Capitol Police, the Metropolitan Police and additional agencies bravely threw themselves between us and violence.

“January 6th was a day of horror and heartbreak, yet it is also a moment of extraordinary heroism. Staring down deadly violence and despicable bigotry, our law enforcement officers bravely stood in the breach, ensuring that democracy survived on that dark day.”

Orquiza understands he now has a place in history, and he’s grateful for recognition of the actions of Capitol Police officers. He’s also proud of the Congressional Gold Medal. But at the same time, he would have rather not lived through the experiences of Jan. 6. And most certainly, he doesn’t want to be seen as a victim or receive sympathy.

“We did our job,” he said. “And if we hadn’t done our job, you can only imagine what would have happened.”

Since taking his Capitol Police oath in 2000, Orquiza has worked during the Sept. 11 attacks, the anthrax attacks and now Jan. 6. He’s also worked cheerier events such as inaugurations and conventions and had lighter moments like traveling to the Iowa State Fair with former House Minority Leader Richard Gephardt for some good ole’ Midwest pork chops.

No matter the occasion, Orquiza says customer service and interacting with the public are always at the top of mind and that putting all people, regardless of background, first is most important. He’s grateful his GW education and experiences gave him a solid foundation to build those skills—he especially remembers classes with Elliott faculty member Michael O. Moore and Columbian College of Arts and Sciences emeriti faculty Charles Herber and Howard Sachar.

Attending GW gave him a great appreciation for D.C. and its monuments, symbols and institutions that he’s dedicated his career to both protecting and sharing.

The events of Jan. 6 threatened those very pillars of the republic, and Orquiza admits it took some time to emotionally heal from that day. But as former Republican House member Adam Kinzinger tearfully told Capitol Police who were testifying before a commission in July 2021: “You guys may individually feel a little broken, but you guys won. You guys held. Democracies are not defined by our bad days. We’re defined by how we come back from bad days.”

Orquiza has answered that call by continuing to do what he’s always done, whether that’s speaking to a tourist in their native language to make them feel welcome, being proud of the history within those democratic institutions or sharing his knowledge with the world. And he never has to venture too far to remind himself of the incredible responsibility he possesses—and upheld two years ago. 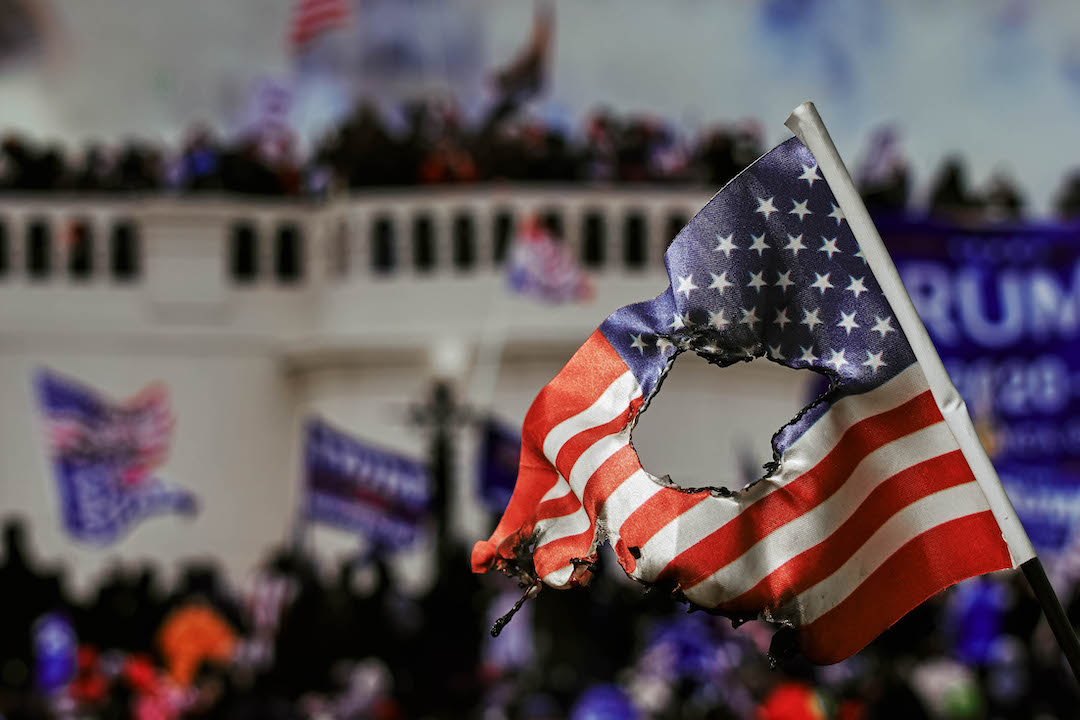 Program on Extremism Tracks Those Arrested in the U.S. Capitol Siege 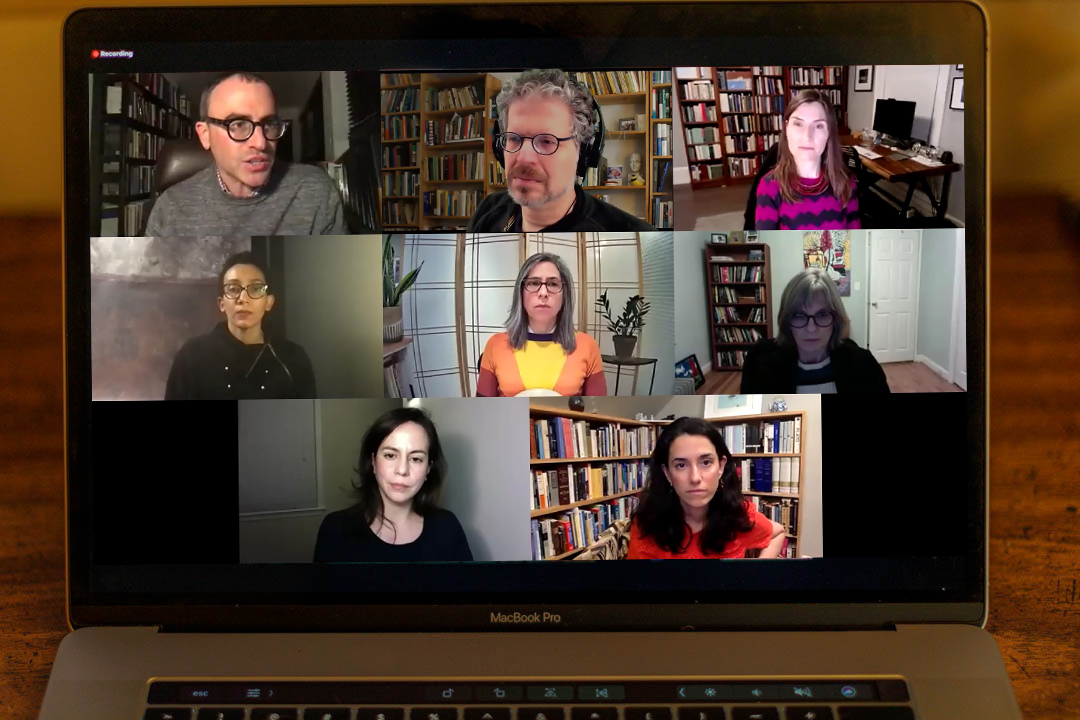 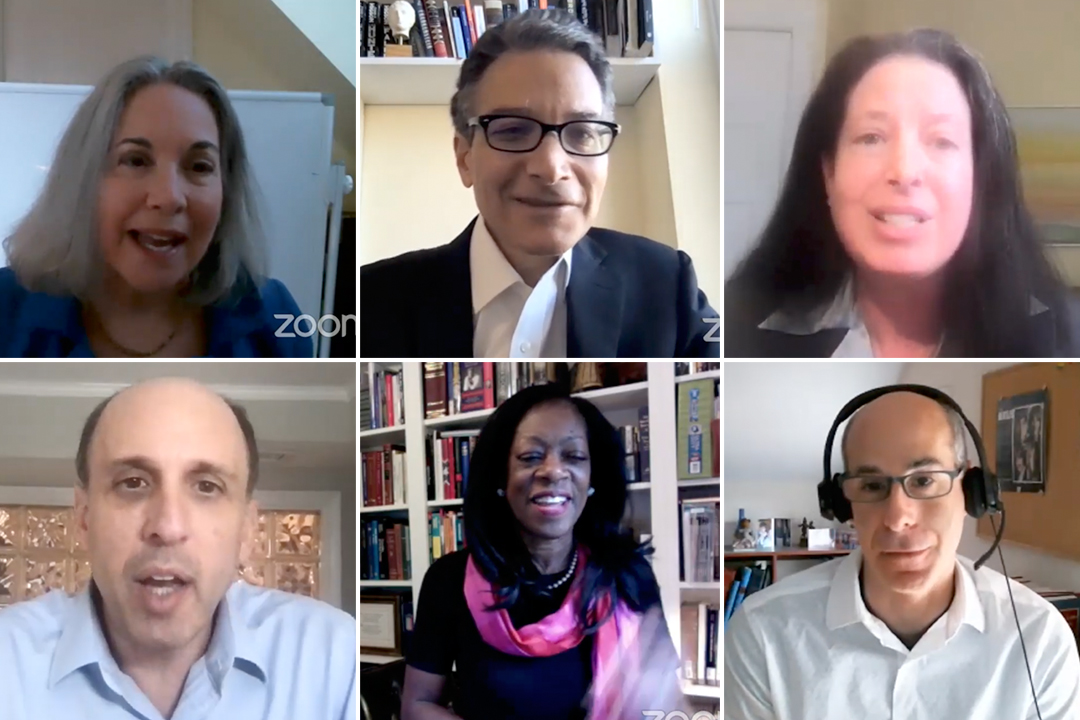