Professor Megan Leftwich is studying biological phenomena, like sea lion swimming and human birth, to engineer solutions for a variety of problems.
March 13, 2015 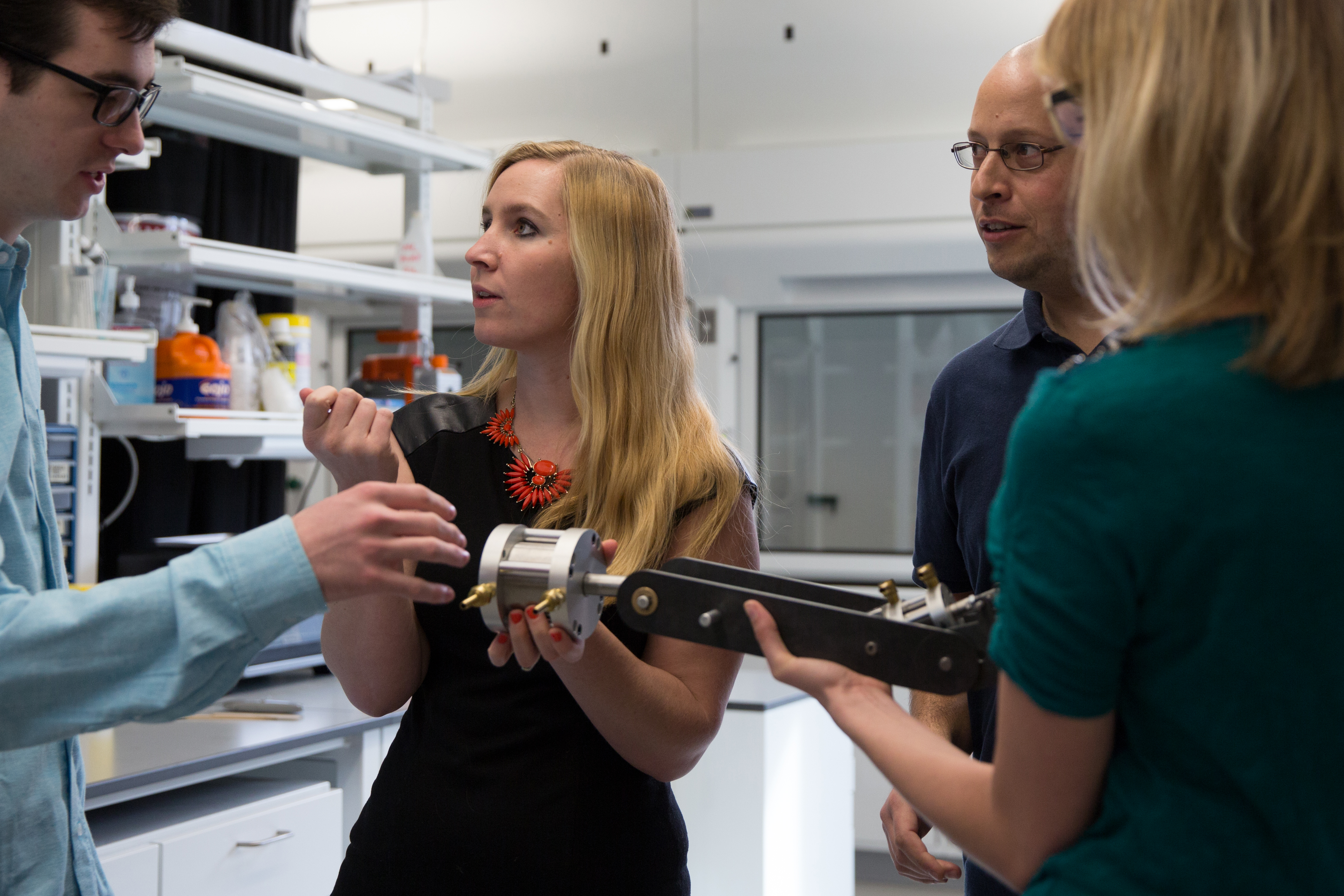 This is the third profile in a GW Today series featuring faculty from the Columbian College of Arts and Sciences and the School of Engineering and Applied Science who are conducting research with an impact in Science and Engineering Hall.

Sea lions glide through the ocean with amazing grace. Not only are they fast swimmers—reaching speeds of 25 miles per hour—but they also are capable of extraordinary maneuvers. These playful animals back flip and spin with ease, like ballerinas of the sea.

When Megan Leftwich took her children to see the American Trail exhibit at the Smithsonian’s National Zoo two years ago, she came face-to-face with the marine mammals.

“I just thought, ‘Man, those are amazing swimmers.’ I really wanted to study them,” said Dr. Leftwich, an assistant professor at the George Washington University’s Department of Mechanical and Aerospace Engineering.

In Dr. Leftwich’s lab, she and her team of researchers work in a field called fluid dynamics, the study of how objects and animals travel through liquids, gasses and plasmas in order to explain phenomena of the natural world.

“I primarily do basic research, and I like to keep it as basic as possible,” she said. “I explore systems to get a better understanding of something that could open the door to a host of applications.”

The Science of Swimming

Sea lions immediately peaked her interest because they move through the water unlike any other animals on Earth.

While fish and other swimming mammals thrust forward with their tails or caudal fins, sea lions rely on their fore flippers, which are analogous to human arms, for underwater movement. They sweep downward, clap their large flippers into their bodies and glide forward, producing jet propulsion. Sea lions are able to cruise the length of an Olympic-size pool with a single clap.

Other animals that use jets to propel forward, like octopi and squid, cannot sustain high speeds or manipulate their bodies with the sea lions’ impressive agility. Sea lions’ hardly traceable wake structure—the disturbance a solid causes in a fluid—also differs significantly from other swimming mammals.

“I want to know, what is the paradigm for successful swimming?” Dr. Leftwich said.

To find out the science behind the sea lions’ swimming mechanisms, Dr. Leftwich returned to the National Zoo. As part of an ongoing research partnership, her team visits the zoo’s California sea lions, using high-definition video cameras to digitize their unique flipper motions.

After analyzing the videos, Dr. Leftwich and post-doctoral scientist Chen Friedman use equations to quantitatively compare differences in the sea lions’ claps and body maneuvers in order to highlight correlations in features such as angular velocity and flipper curvature.

Observing zoo animals does, however, come with limitations: It does not allow the researchers to analyze how the flipper affects the movement of the water. To compensate for this shortfall, students and researchers in Dr. Leftwich’s lab are perfecting a robotic flipper that mimics the sea lions’ motion. Once complete, they will send it through a lab-length water tunnel in Tompkins Hall and use flow diagnostic techniques to chart the fluid’s movement, as well as the forces it takes for a sea lion to move its knuckles, wrists and elbows. (Sea lions’ front flippers have all the skeletal elements of land mammals.)

“One really interesting thing we found when we looked at the images is that different parts of the flipper have varying amounts of fur and smoothness,” said Mr. Waldron, a junior studying mechanical and aerospace engineering. “We want to try and uncover how the sea lion’s hair and skin play a role in its hydrodynamics to give it such an advantage when it does turns in water.”

“Most people in the Mechanical and Aerospace Engineering Department don’t handle sea lion tissue, oddly enough,” he said. “So there was a lot of inter-departmental collaboration to help one undergraduate research student.”

For future studies, Dr. Leftwich hopes to collaborate with the SLEWTHS program (Science Learning and Exploration With the Help of Sea Lions) based in California, where her team would be able to experiment directly with the animals in their natural habitats.

One potential application for Dr. Leftwich’s research is to provide models for underwater vehicles, such the autonomous ones used by the Navy for disarming underwater bombs.

“The sea lion may be a good model for that because they’re highly maneuverable,” she said. “They may also be harder to find, since they don’t produce the typical wake you might expect.”

The Mechanics of Birth

On the other end of Dr. Leftwich’s lab, her students are investigating a much different fluid dynamics problem: the role amniotic fluid plays in labor delivery.

In a medium-sized tank meant to simulate a woman’s uterus, undergraduate student Alexa Baumer pulls a cylindrical rod through a highly flexible, latex tube. The tube mimics the human birth canal. The cylinder? A baby. By varying the amount of fluid present in the tank and the position of the “fetus,” she is able to measure the effect of fluid properties and fetal position on the amount of force it takes to deliver a child.

It is an extremely simplified, geometric model, but Dr. Leftwich thinks this experiment and others could help her lab to better understand a complex human problem.

The role of amniotic fluid—its viscosity, volume and pressure—in transferring the force of the contracting uterus to the fetus remains largely a mystery in the medical community.

“Maybe we’ll find that viscous amniotic fluid does a better job of transferring the force from the uterus. Or perhaps the fluid causes lower pressure behind the baby, so it sort of sucks the baby back in,” Dr. Leftwich said. “We really just don’t know very much about the problem.”

Cesarean delivery accounts for 32 percent of all births in the United States, according to the Centers for Disease Control and Prevention. While C-sections can be a life-saving procedure for both mother and child, some evidence suggests that they can, in some cases, have a negative effect on newborn health and generally require a longer recovery time for mothers. Moreover, surgical births can cost from $14,000 to $25,000, compared to vaginal births that can range from $9,000 to $17,000, depending on the hospital and state. Every one percent decrease in C-sections could save the United States more than $300 million in health care costs, according to the U.S. Department of Health and Human Services.

“If we understand the mechanics of the problem, we can find mechanical solutions to reduce even a small subset of difficult births,” Dr. Leftwich said. “What I’d like to do is arm physicians with empirical tools to help them figure out the mechanics of successful vaginal delivery.”

But from sea lions to human birth, Dr. Leftwich is hesitant to say that her research is confined to any one specific problem.

“I feel like if we don’t know all of the potential applications, that’s really a good thing,” she said. “Often problems are solved by accident because of investigating some fundamental phenomenon in it of itself.” 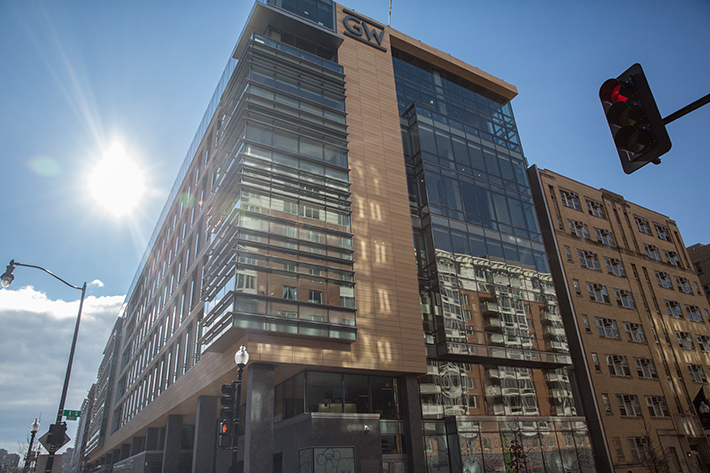