The 10 outstanding D.C. high school students who will be receiving full-ride scholarships were honored in a ceremony Wednesday night on campus.
March 25, 2022 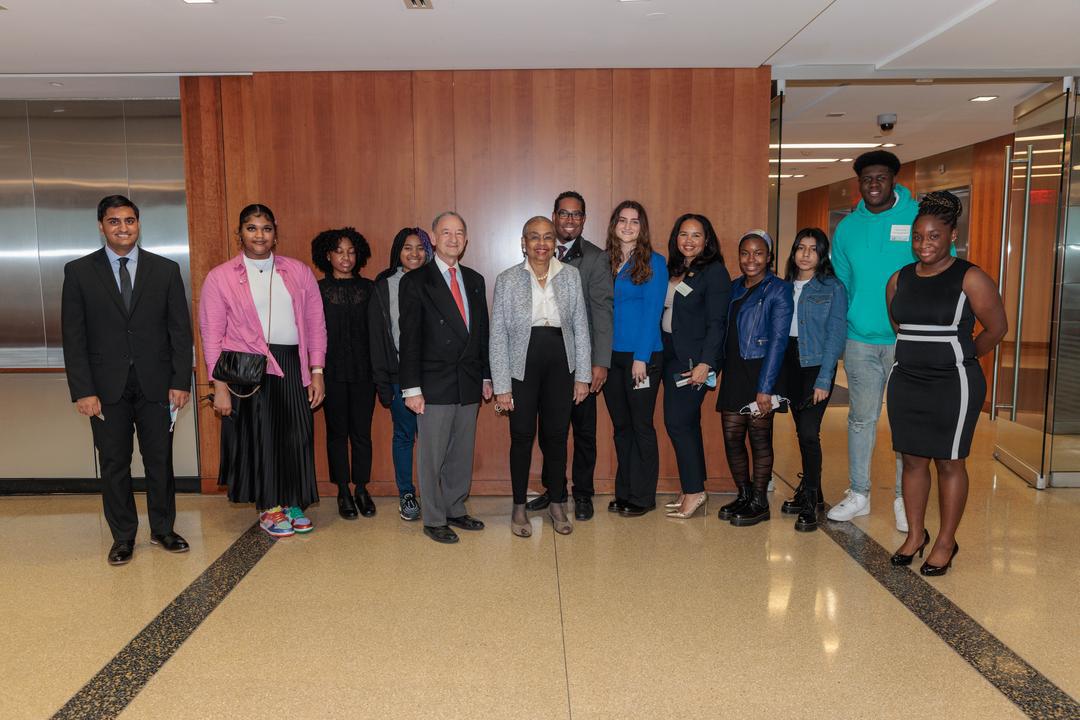 As day turned to night Wednesday in the nation’s capital, nine D.C. high school students and their families saw their city from a perspective they had never seen.

Perched high up in the City View Room on the seventh floor of the Elliott School of International Affairs building while being recognized for their academic prowess and community engagement, the Stephen Joel Trachtenberg Scholarship program class of 2026 scholars had a birds-eye view of the National Mall, a place where policies are made, ideas are formed and progress is had. These nine students, plus one who was attending a dual-enrollment course and couldn’t make it Wednesday, have the opportunity to stay in D.C. to attend George Washington University, where they’ll work to become influential citizens in the city they call home.

“It is a great day in Washington, D.C., right now,” D.C. State Superintendent of Education Christina Grant said in an address to the scholars and their families. “You are what it means to be a native Washingtonian.”

Thanks to the SJT scholarship program, which covers tuition, room, board, books and fees throughout four years at GW, these 10 highly motivated D.C. students will get a head start in creating the impact they seek.

Since 1989, more than 200 D.C. high school students have received this full-ride scholarship. GW selects students based on high school academic performance, strength of curriculum, recommendations, leadership qualities, community service, extracurricular activities and achievements and standardized test scores, should they choose to submit them. Thirty schools across D.C. nominated 145 students for the scholarship this year. Of the 25 students interviewed, 10 were selected to receive the SJT scholarship.

Each scholar brings a lifelong commitment to their neighbors, classmates, friends and families and will continue to do so while pursuing their academic dreams unburdened by cost.

Eastern High School’s Damiyah Brown was deeply moved by a pre-medical summer program that allowed her to examine the racial disparities in healthcare delivery in the United States, especially as it pertained to disproportionate maternal and infant mortality rates in Wards 7 and 8. She was also alarmed at the significantly higher COVID-19 mortality rates in minority communities.

Brown wants to be in the middle of that change and is thrilled she actually can be by staying home to pursue a political science degree from the Columbian College of Arts and Science.

“Being here in D.C. feels like there’s more of an impact,” Brown said. “I feel like I can really do something for my community being in school here.”

Mamadou Diabate of the Bell Multicultural High School/Columbia Heights Educational Campus will be the first in his family to attend college. His first job as a kid was helping his mother at her Eastern Market vending stall, where he first learned the value of hard work. A speaker of four languages, Diabate will study at the Elliott School and looks forward to being someone other D.C. kids can look up to.

“When I was in middle school even and started thinking about college, GW was my dream school, and honestly it’s a surreal feeling now,” he said. “I wanted to do something on the international spectrum just since I can speak multiple languages and feel like I can make an impact, and this is a perfect place for that.”

GW has long been a place where future leaders come to get educated, and the SJT class of 2026 is chock-full of those driven students. Provost Christopher Alan Bracey told the recipients Wednesday night that they were selected as SJT scholars because they embody the university’s core values and have the drive to maximize all the school has to offer.

“Your motivation and thirst for knowledge are what make you such an exciting addition to the George Washington University's vibrant community of scholars,” Bracey said. “Here, your potential will be fully realized.”

President Mark S. Wrighton spoke of how valuable his own education experience was, noting that his parents did not attend college. He shared the story of washing dishes in a lab for a chemistry professor because he needed the money. In that moment, he didn’t envision that he would one day lead a prestigious institution such as GW, and he advised the incoming students to become involved in what they are learning and take advantage of opportunities.

“When you come here, it is my hope that by joining this research university, you will have the opportunity to participate in creative scholarship, delivering new knowledge to society that can make a difference in the world,” Wrighton said.

D.C. Council members Elissa Silverman, Mary Cheh and Janeese Lewis George were all in attendance to welcome the city’s future leaders into the next chapter of their lives.

Congresswoman Eleanor Holmes Norton (D-D.C.) was once in these students’ shoes as a D.C. high school student looking to make a difference. Prior to election to the House of Representatives in 1991, Norton, a constitutional scholar, was active in the civil rights movement and later became the first woman to lead the U.S. Equal Employment Opportunity Commission.

She has spent her career breaking through glass ceilings and fighting to provide everyone of all backgrounds equal opportunity, and she proudly welcomed the 10 SJT scholars to D.C.’s “hometown university.”

“Our D.C. scholarship students will take their rightful place among the best and the brightest,” Norton said.

Learn more about how GW is expanding access to the transformative power of a GW education through scholarships and fellowships. Open Doors: The Centuries Initiative for Scholarships & Fellowships charts a course to expand opportunity for the next generation of leaders at GW. 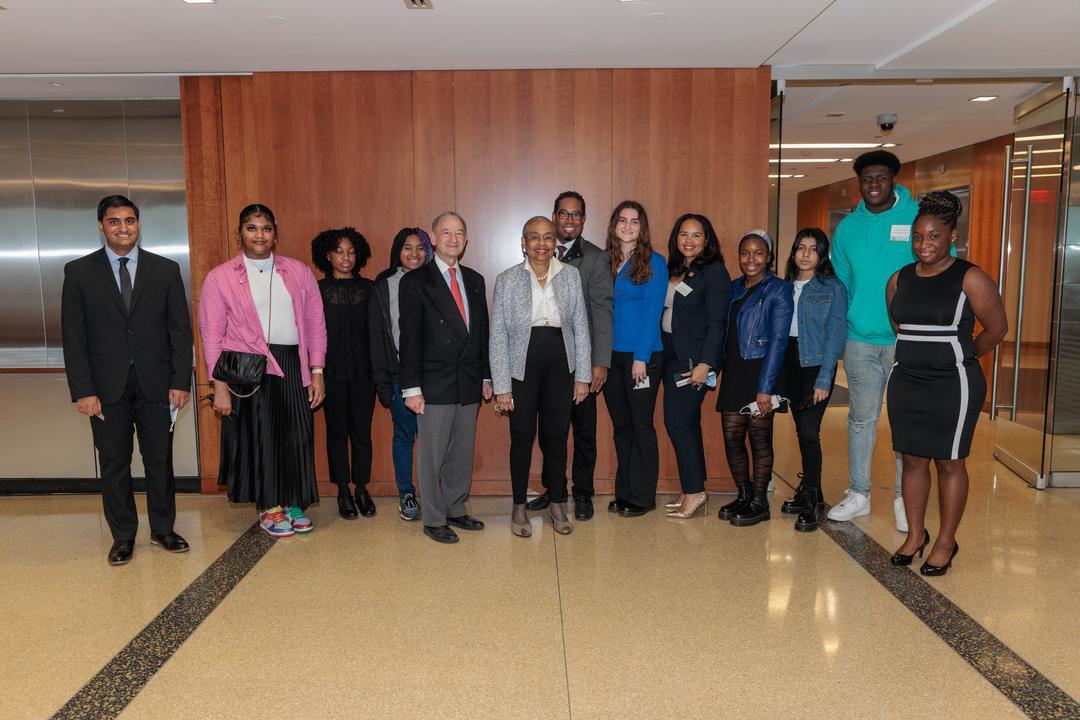 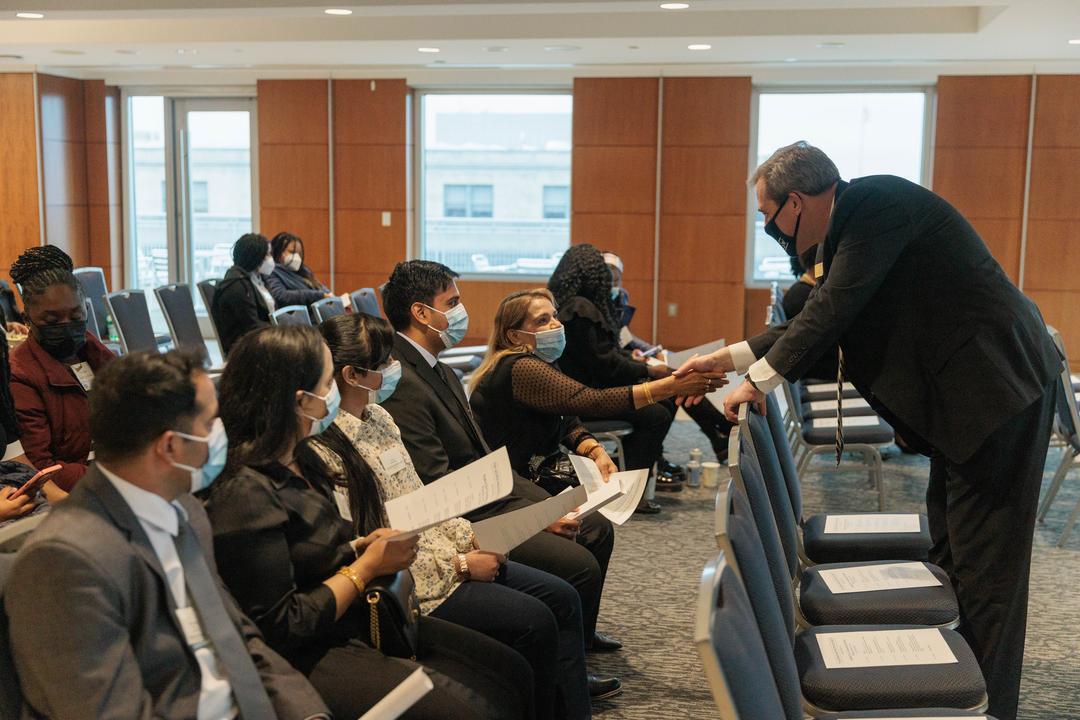 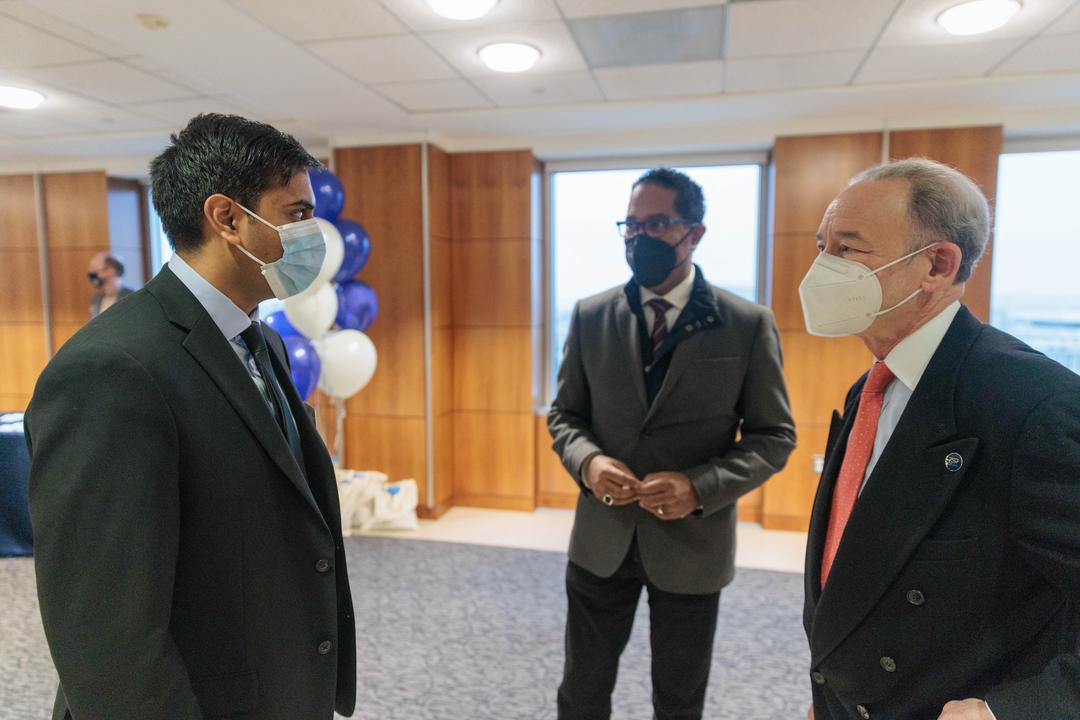 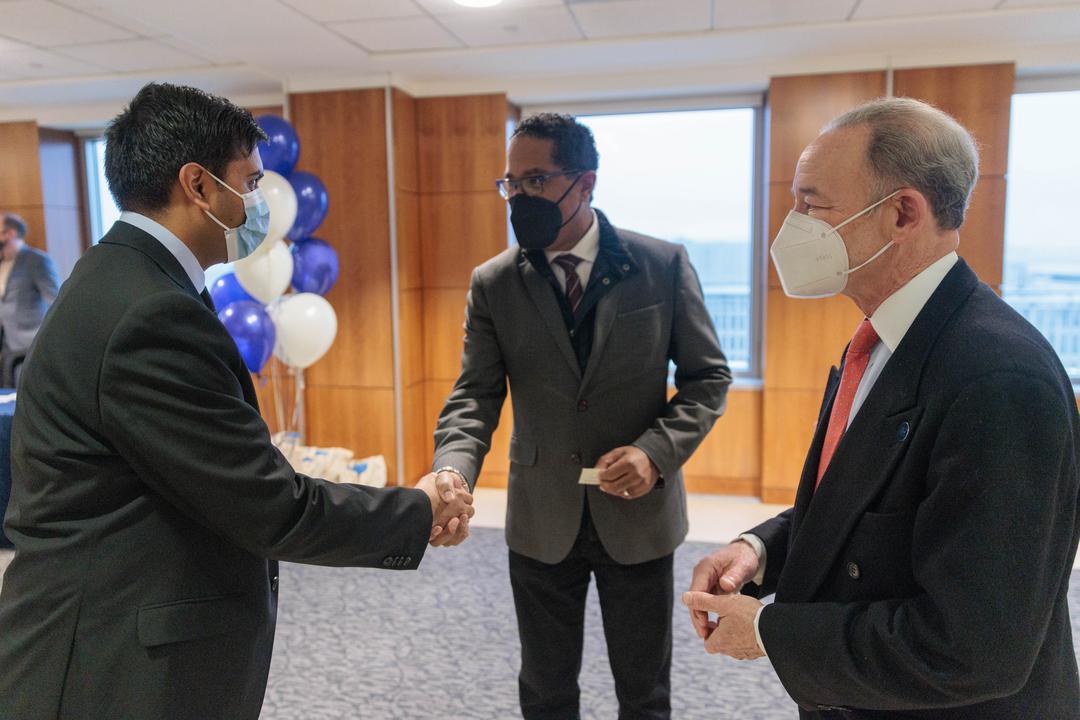 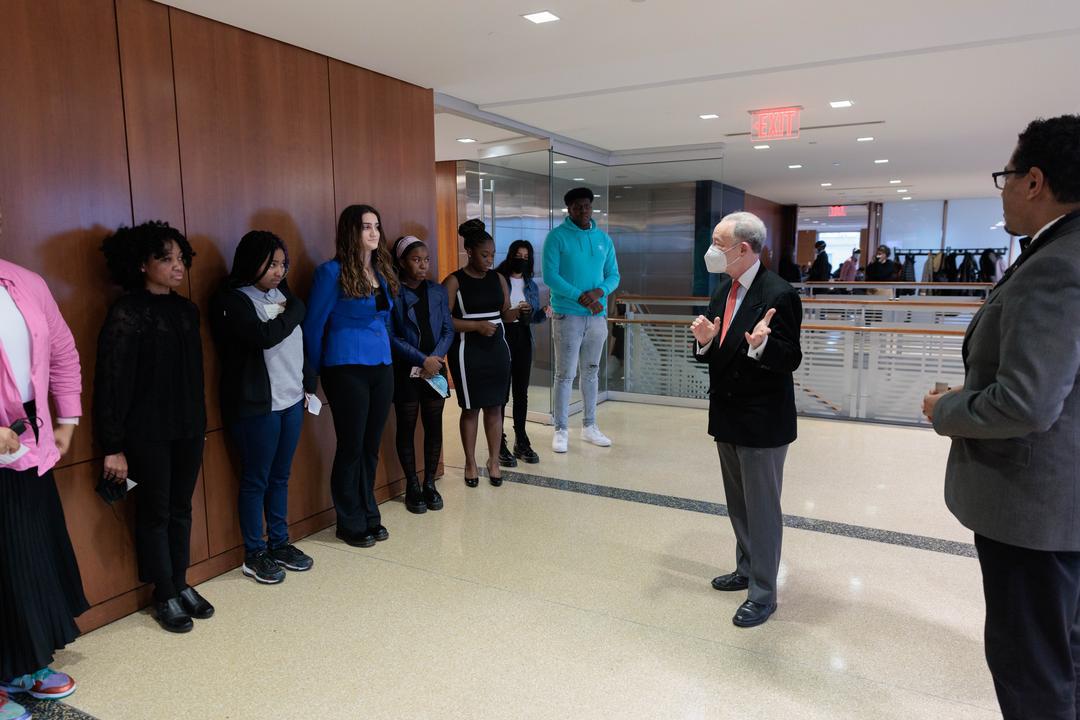 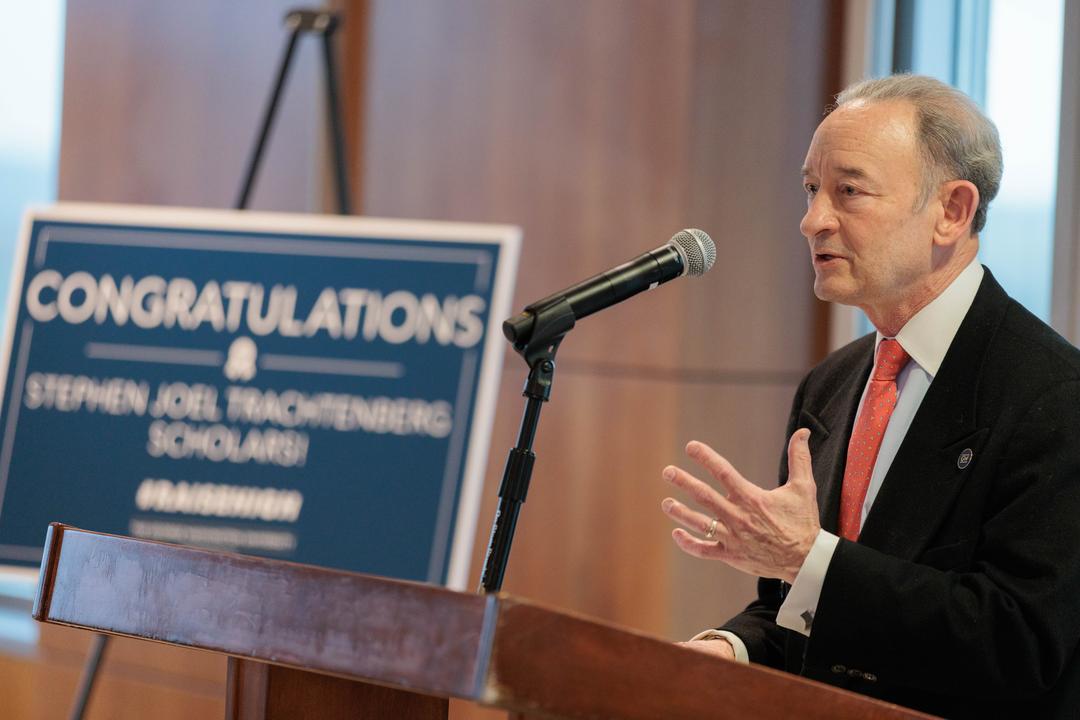 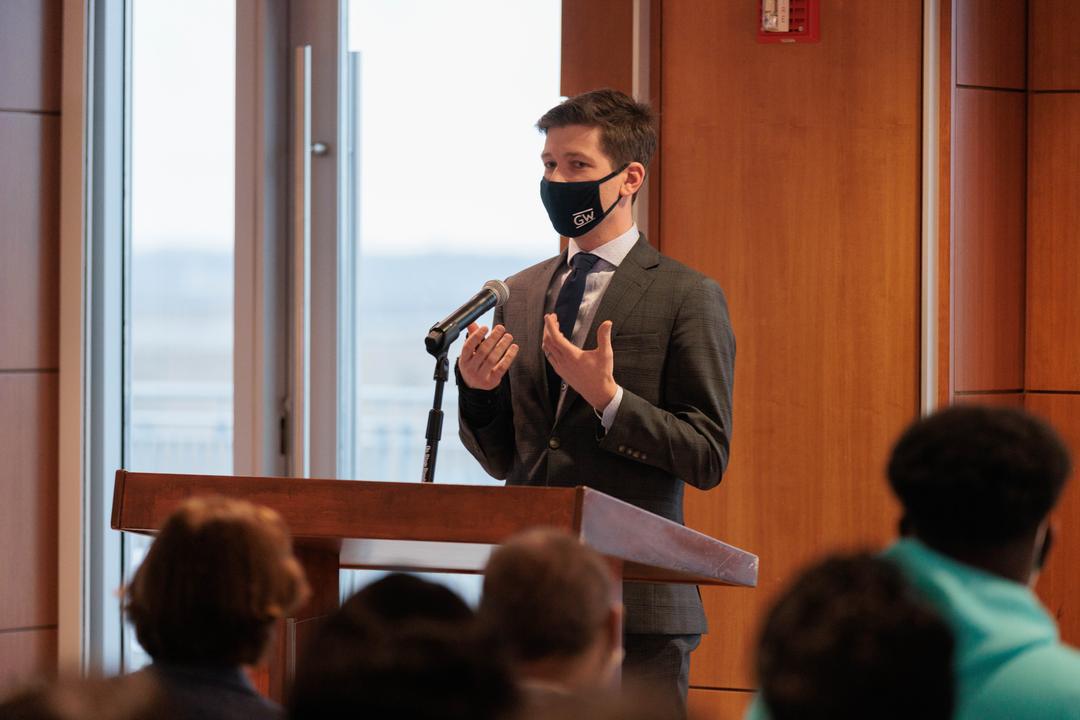 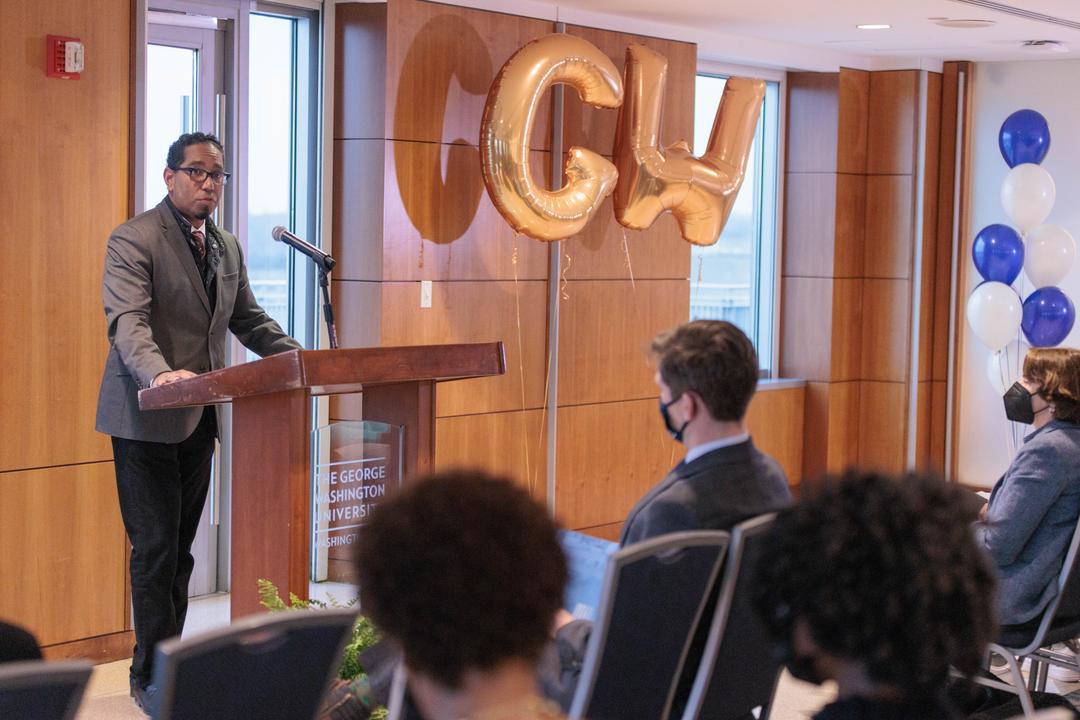 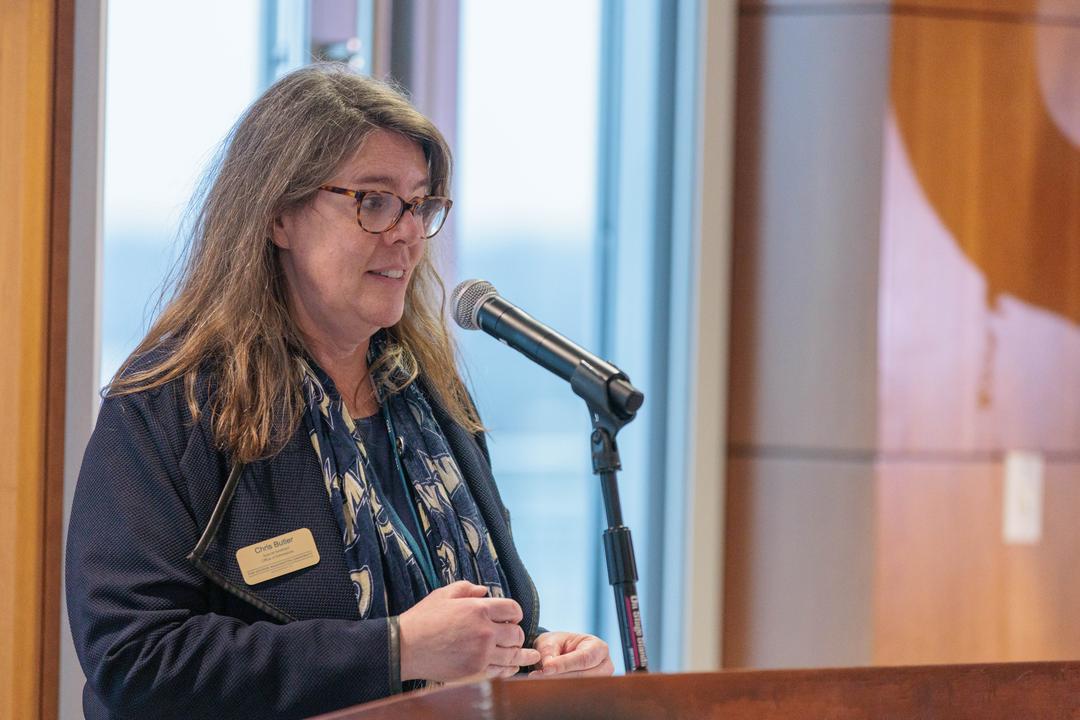 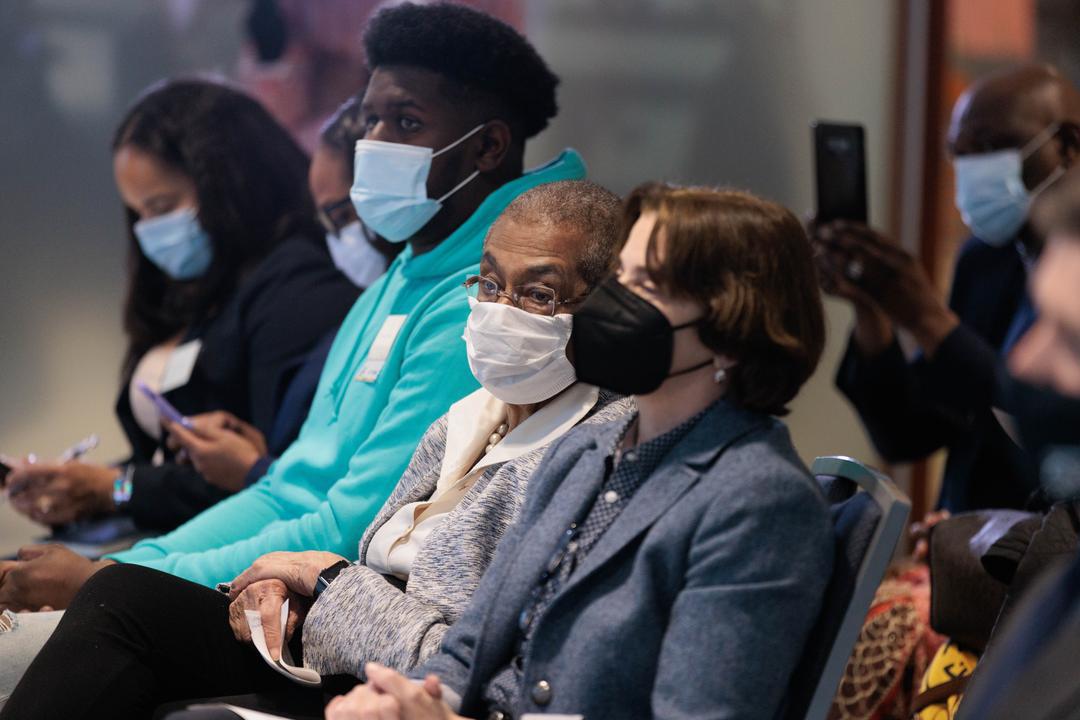 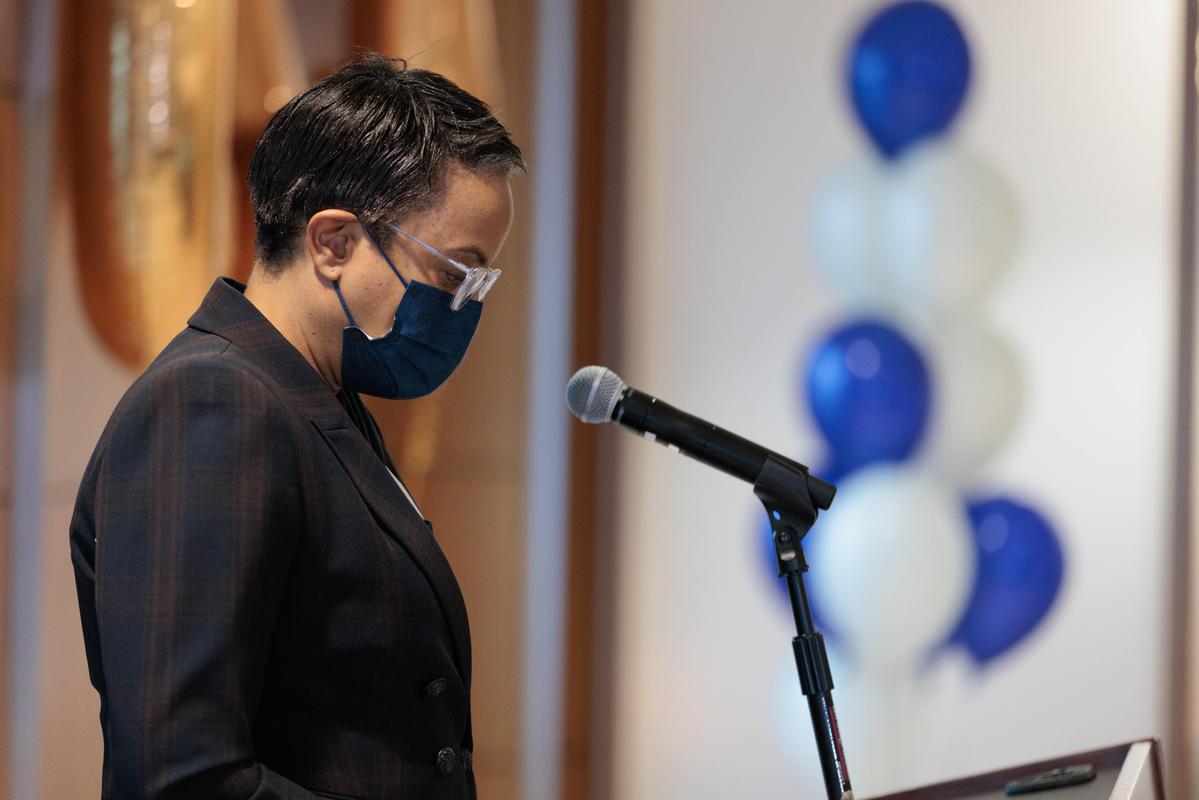 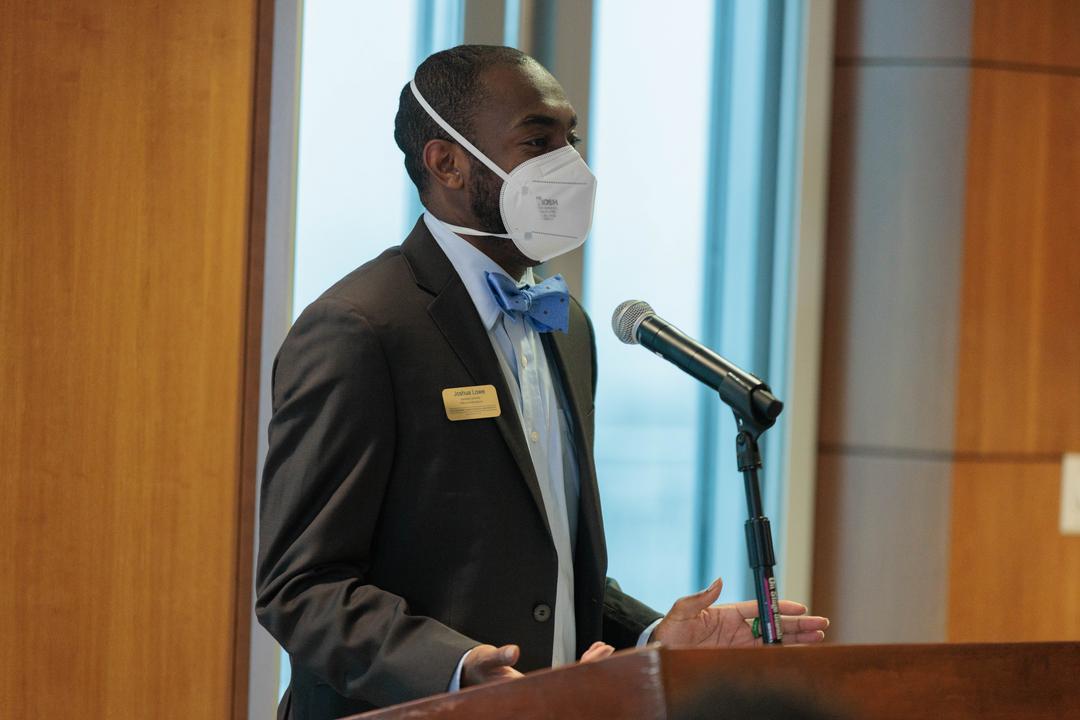 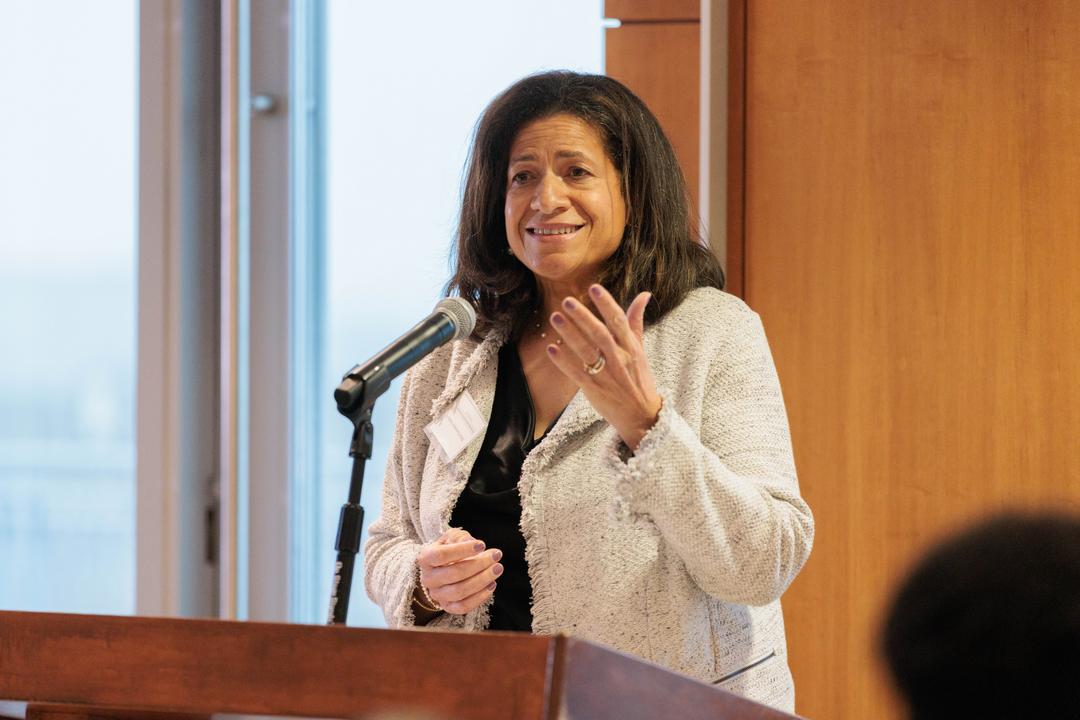 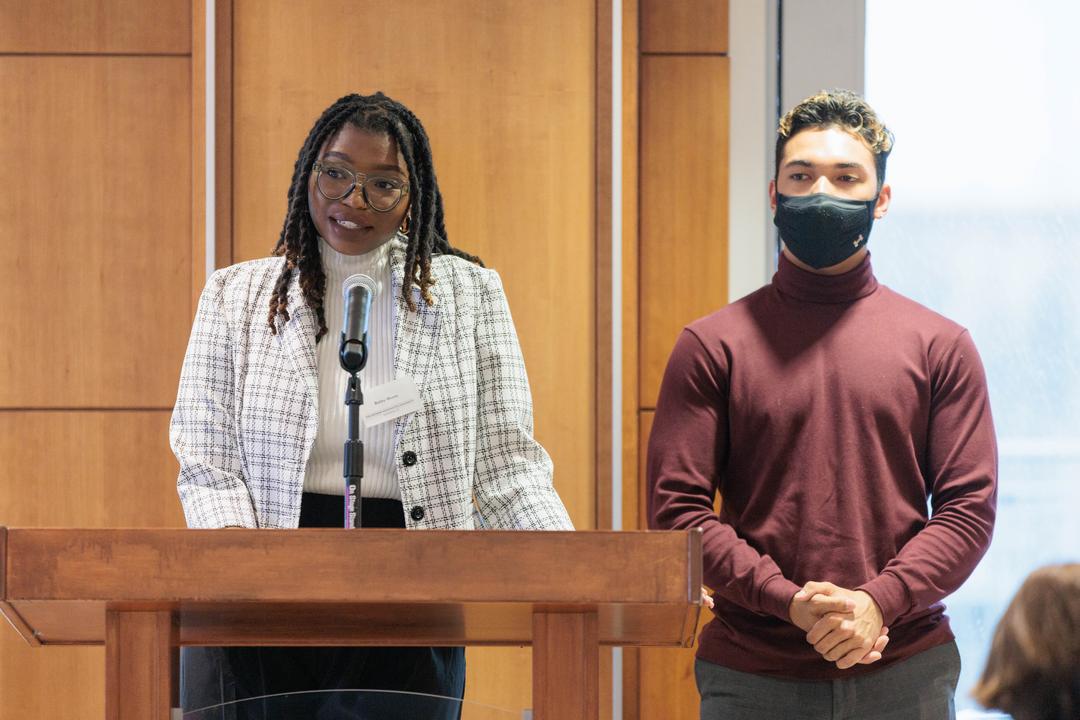 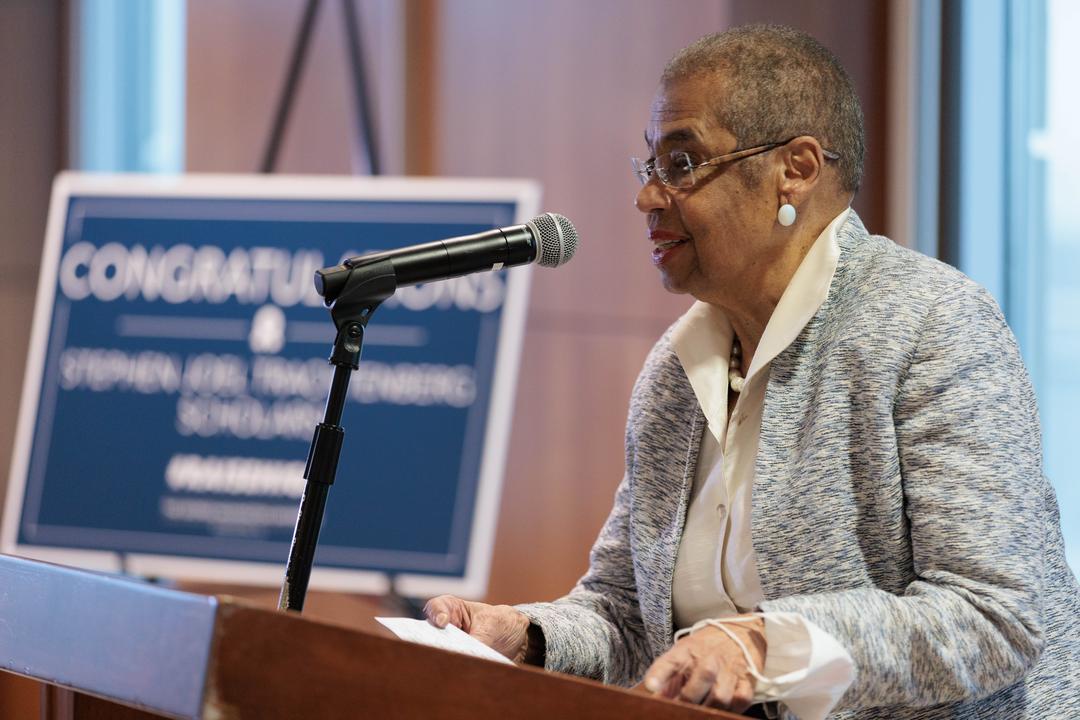 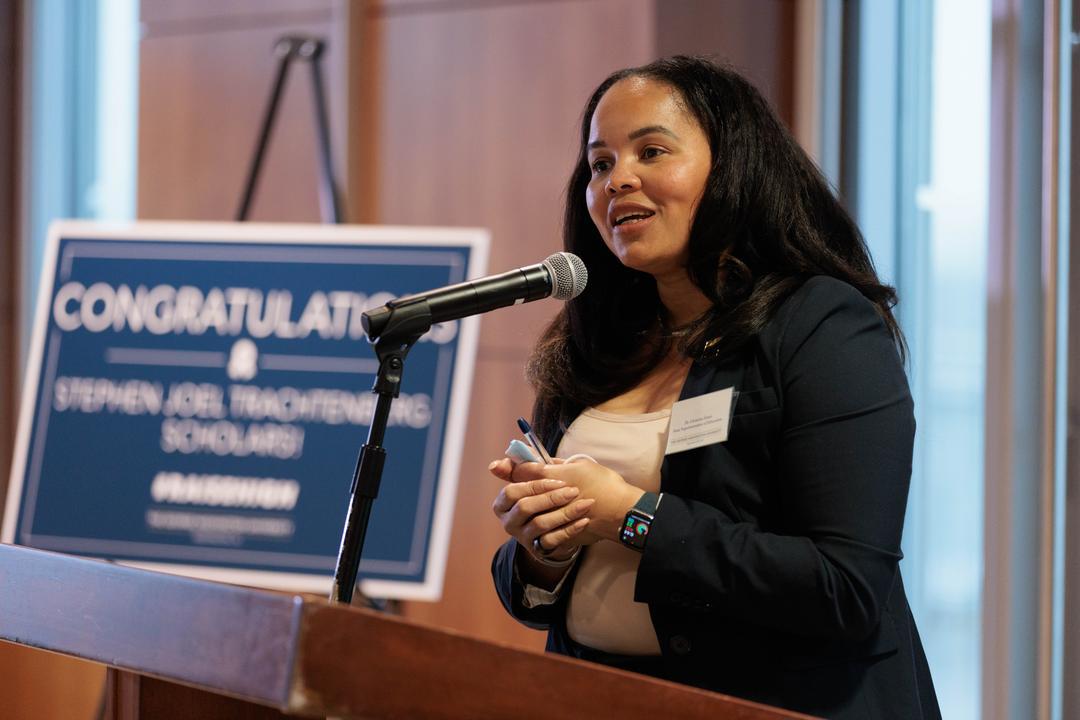 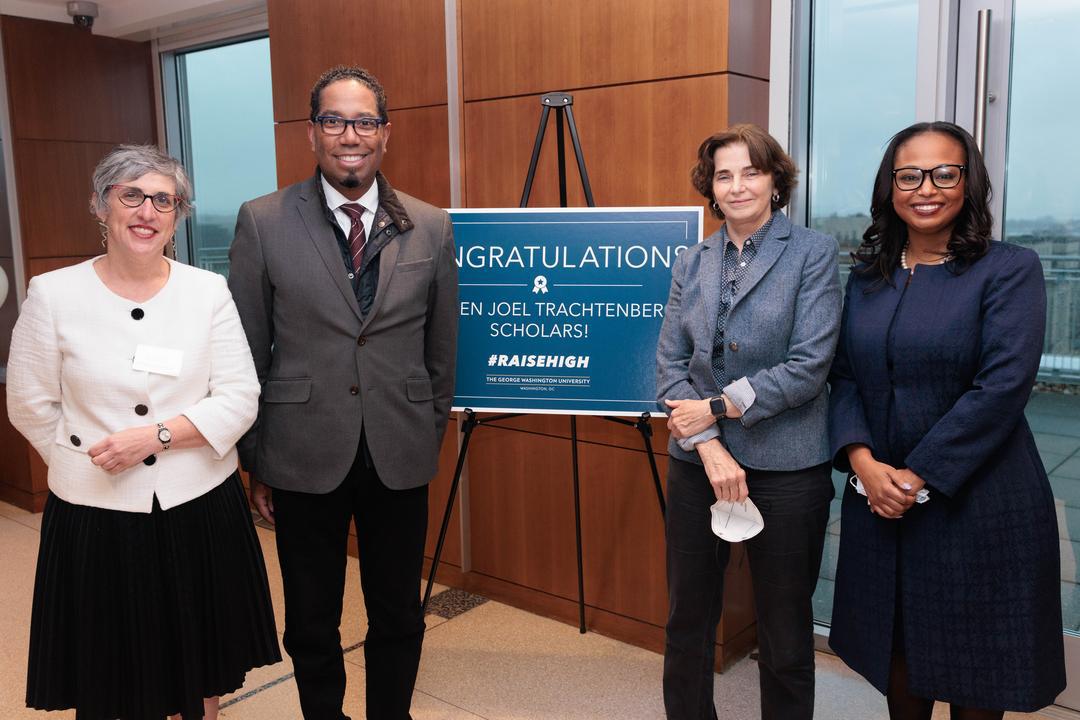 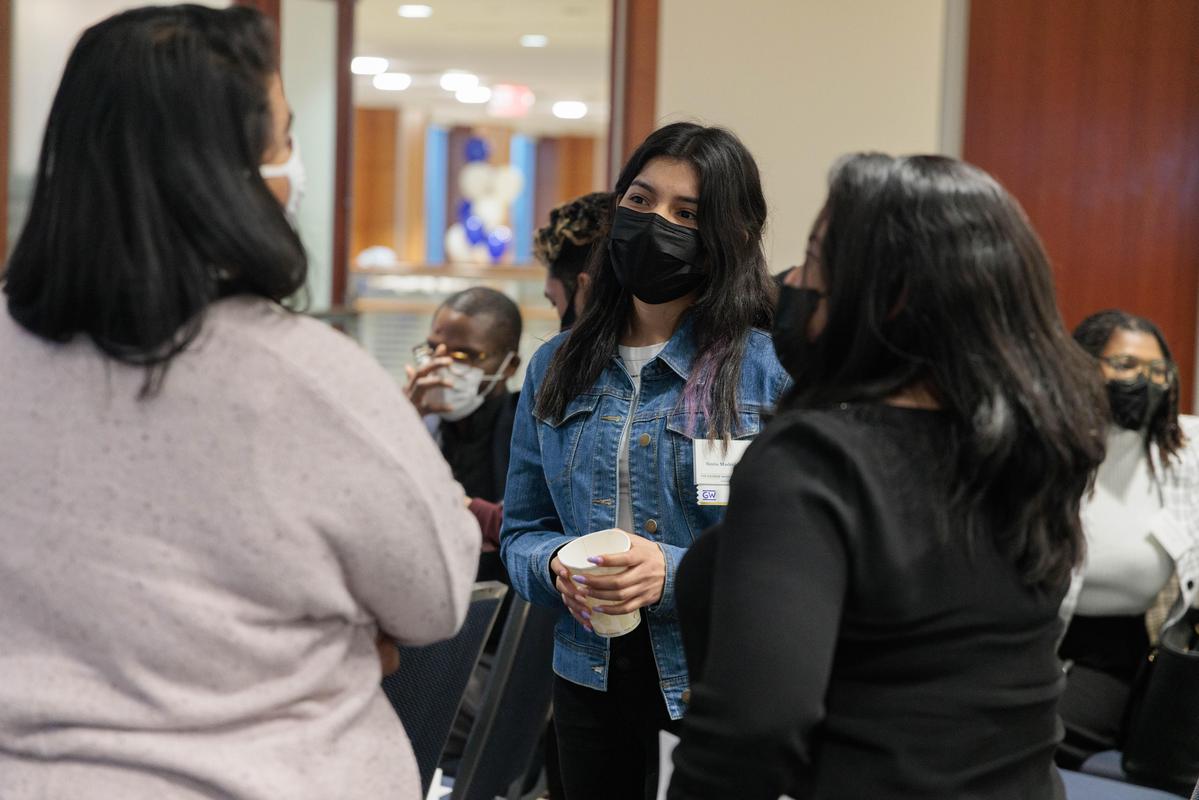 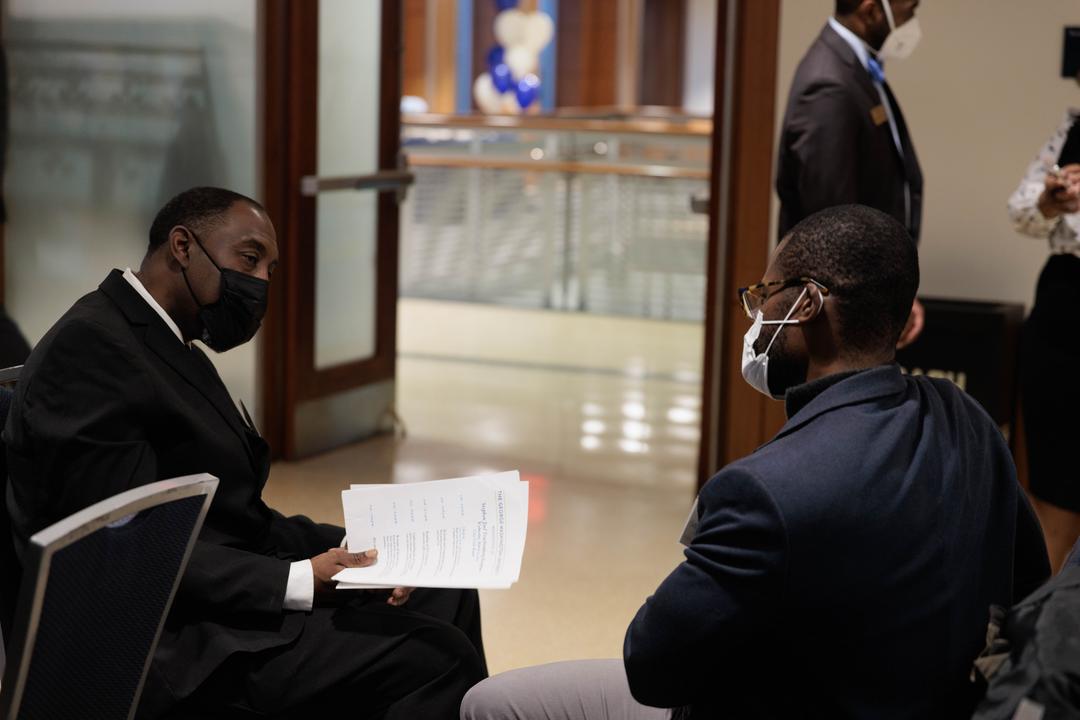 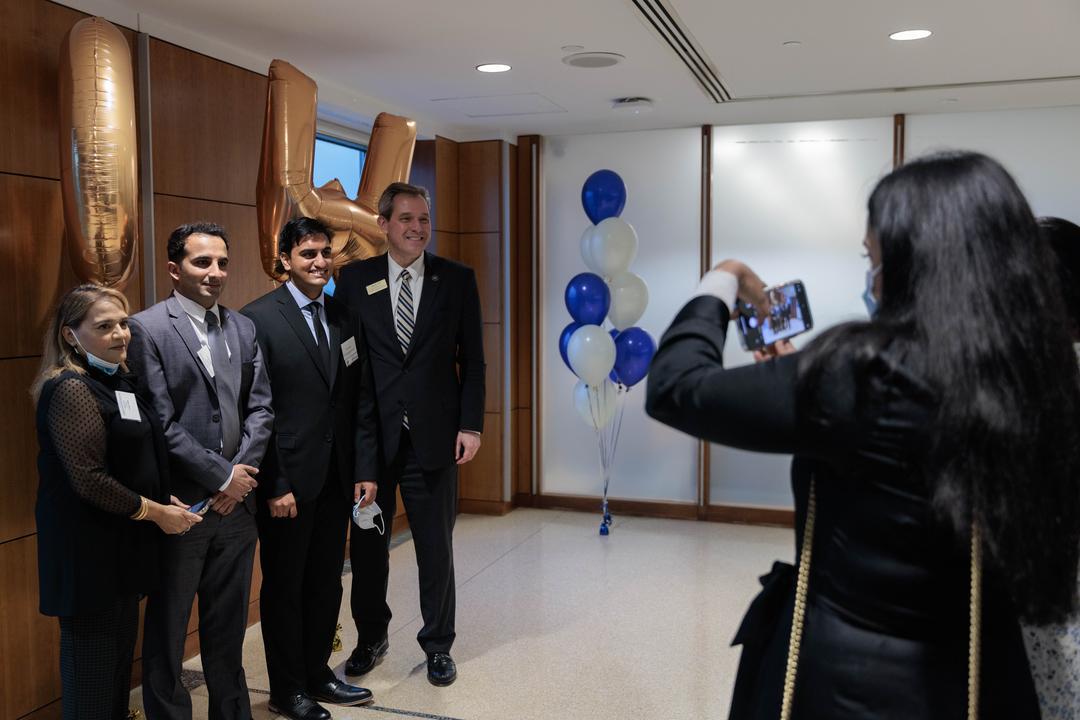 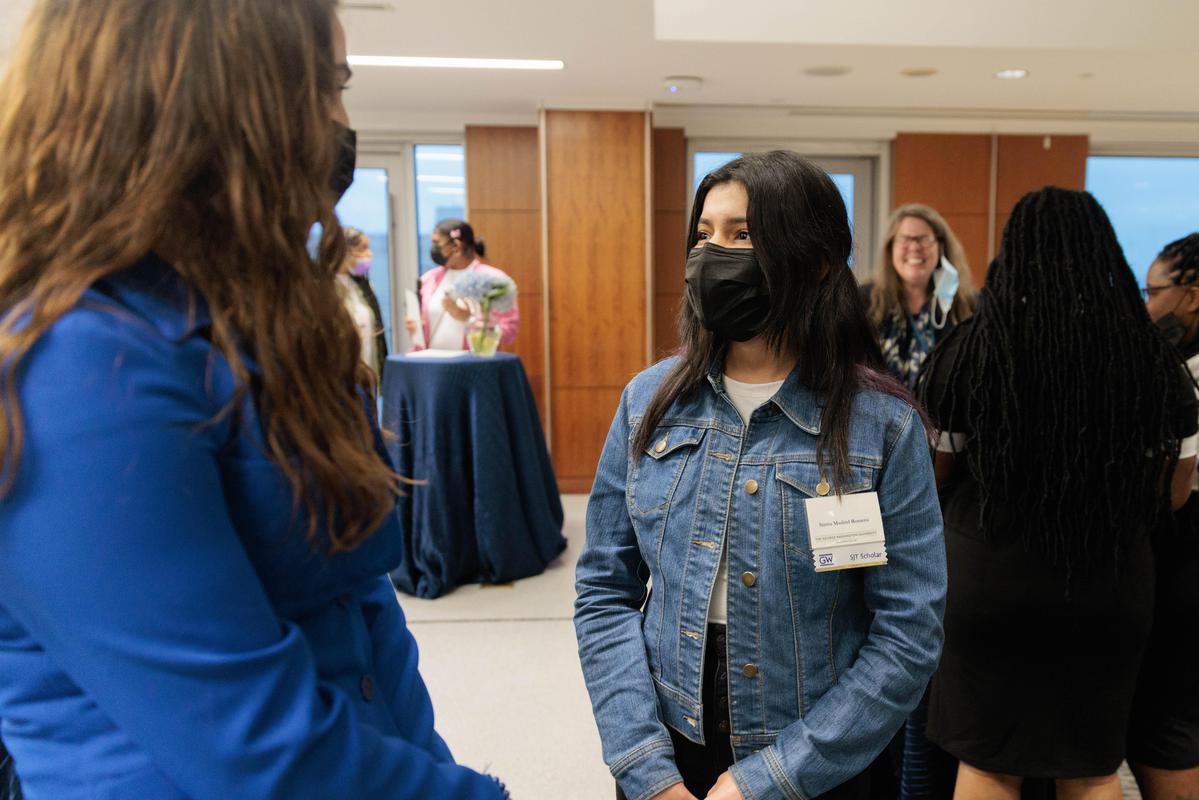 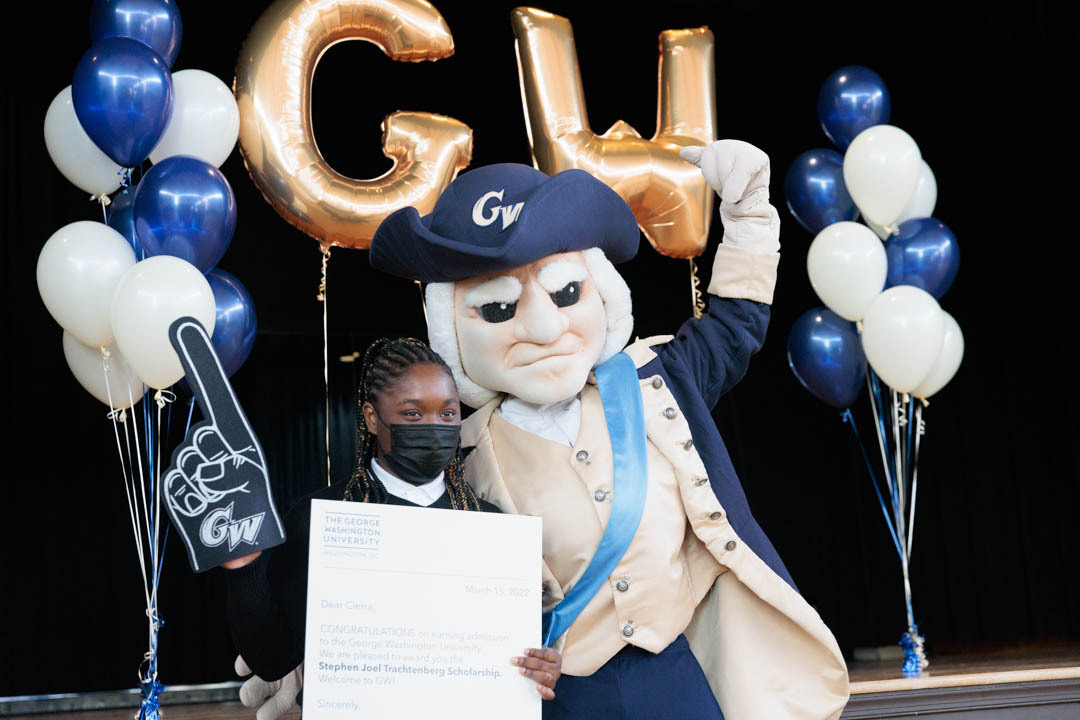