The Iraqi senior contributes to research that aims to cure conditions like Alzheimer’s and Parkinson’s diseases and uncover the mysteries of infertility.
October 10, 2016 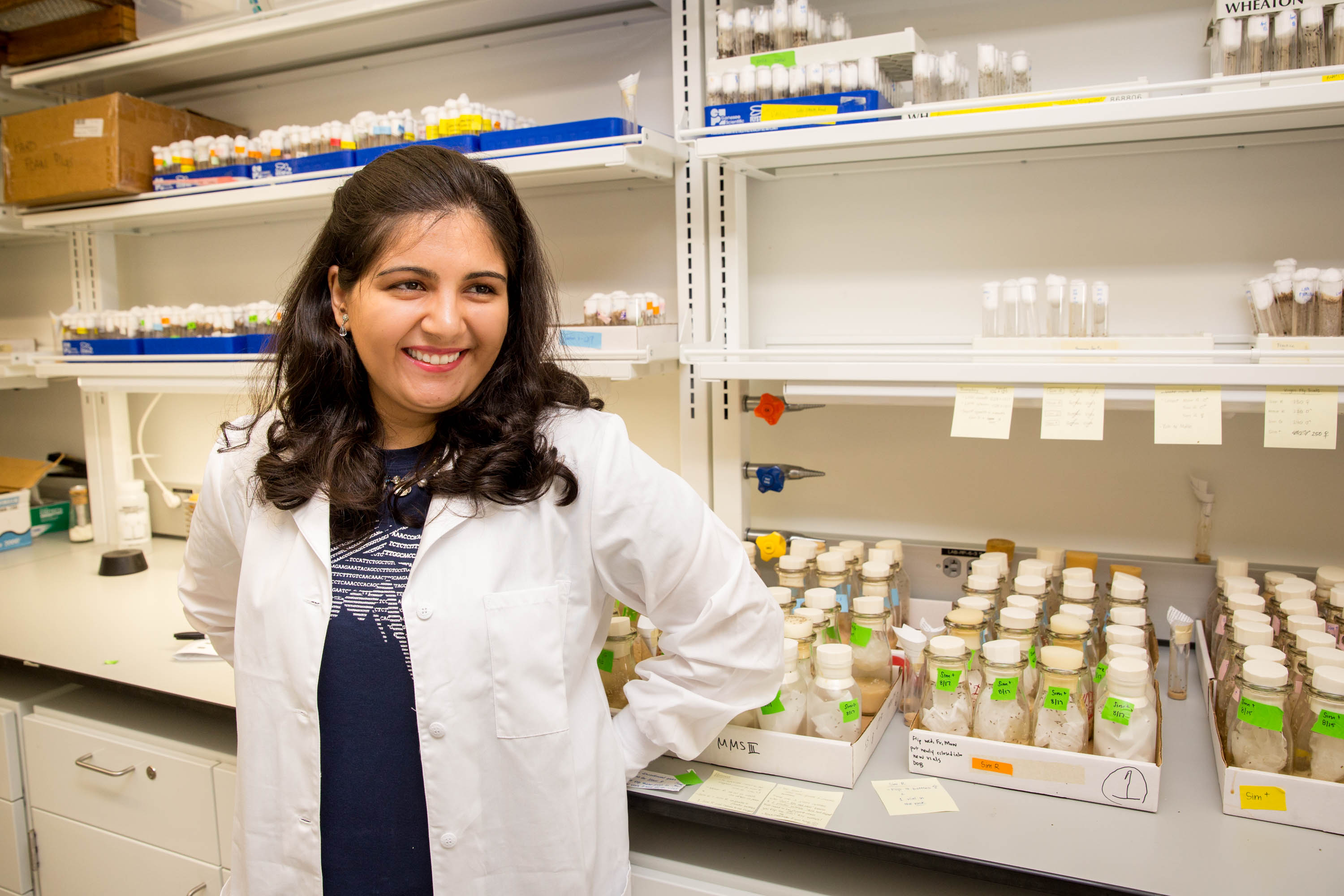 Iraqi senior Reem Al Shabeeb: "There was never a doubt I would be a doctor, whether here or in Iraq, but what is different here is that I get also to be a scientist..." (Logan Werlinger/GW Today)

Reem Al Shabeeb’s curiosity about science started as young girl in Baghdad. In the evenings she would sit around the dinner table and listen to her two physician parents talk about their work. She admired her aunt, the first woman at her Iraqi college to earn a PhD in biology.

The hefty medical books around her childhood home captured her attention. It was this same hunger for knowledge that helped her to learn English. Ms. Al Shabeeb knew she would grow up to be a doctor, but she didn’t anticipate how her interests would shift toward laboratory work until she came to the United States.

Now a senior at George Washington University, Ms. Al Shabeeb is pursuing a double major in biology and chemistry. She spends about 12 hours a week in two laboratories. That’s in addition to her classes. In those labs, Ms. Al Shabeeb works on innovative research that could have an impact on understanding infertility in humans and finding a cure for neurodegenerative diseases like Alzheimer’s and Parkinson’s.

“There was never a doubt I would be a doctor, whether here or in Iraq, but what is different here is that I get also to be a scientist and contribute to science while also doing medicine,” she said.  “My parents used to say ‘Oh when you grow up you’re going to discover something,’ but my possibilities there were limited. Here I may indeed grow up and discover something.”

Working in the GW labs have been opportunities Ms. Al Shabeeb said she never would have had if her family stayed in Iraq. They fled Iraq when she was a teen. The family moved first to Malaysia then to Jordan where they applied to immigrate to the United States. In October 2012 at age 17, Ms. Al Shabeeb and her family started their new lives in America.

Her aspirations to become a doctor were encouraged in Iraq, Ms. Al Shabeeb said, but there were fewer paths to becoming a scientist. Ms. Al Shabeeb was inspired by the technology in her American classrooms and the seemingly limitless opportunities for scientific discovery.

Before she arrived at GW, Ms. Al Shabeeb planned to be a biology major. She quickly found out her studies at GW would take her much deeper into the scientific world.

In her research, Ms. Al Shabeeb helps develop a chemical analysis method called single-cell mass spectrometry to identify proteins in small populations of neurons under Assistant Professor Peter Nemes. Dr. Nemes recently received the Beckman Young Investigator Award by the Arnold and Mabel Beckman Foundation to develop single-neuron proteomic tools to help the understanding of how neurons utilize proteins during normal development and function. Identifying these proteins could help scientists develop ways to treat the millions of people suffering from neurodegenerative diseases like Alzheimer’s and Parkinson’s.

“It has a big public health effect if we can do that,” she said.

Ms. Al Shabeeb is slated to present her chemistry research at the Undergraduate Research Symposium in the Chemical and Biological Sciences at the University of Maryland—Baltimore  County on Oct. 22.

This could have important implications in understanding infertility in humans, she said.

Ms. Al Shabeeb, who received the Boeing Power & Promise scholarship during her sophomore year, presented her biology honors thesis as a junior. She received the GW Undergraduate Research Award and will continue her biology research this academic year while she prepares her chemistry thesis.

Through her lab work Ms. Al Shabeeb said she has gotten to know other undergraduate students who share her interests. When she isn’t in the lab or stressing about medical school applications, Ms. Al Shabeeb is cultivating a new hobby–karate.

She joined the JKA Karate Club of GW this semester and for now is still a low-level white belt. She said she is surprised by how much she has gained from the activity she was once apprehensive about.

“At the beginning I thought karate would take away time from studying, but then after I started I noticed that I became more focused, and it just increases my relaxation,” she said. “When I’m there, I don’t think about studying. It’s just a great time to forget about all the problems you have and focus on one thing.”

Ms. Al Shabeeb said she has been able to develop her passion for science and experience professional growth through her research at GW. She hopes these abilities will help her be successful in medical school and beyond.

“At GW I learned how to think about doing research and to think about the research methods, how to approach the questions, how to be more precise and more patient about research,” she said. “That’s an experience I’ve never had before.”

Knowing she contributed to research that will continue long after she leaves the university is a rewarding feeling, Ms. Al Shabeeb said.

“I am contributing to something that is bigger and something that will be there forever,” Ms. Al Shabeeb said. “That beginning is a big milestone for me.”