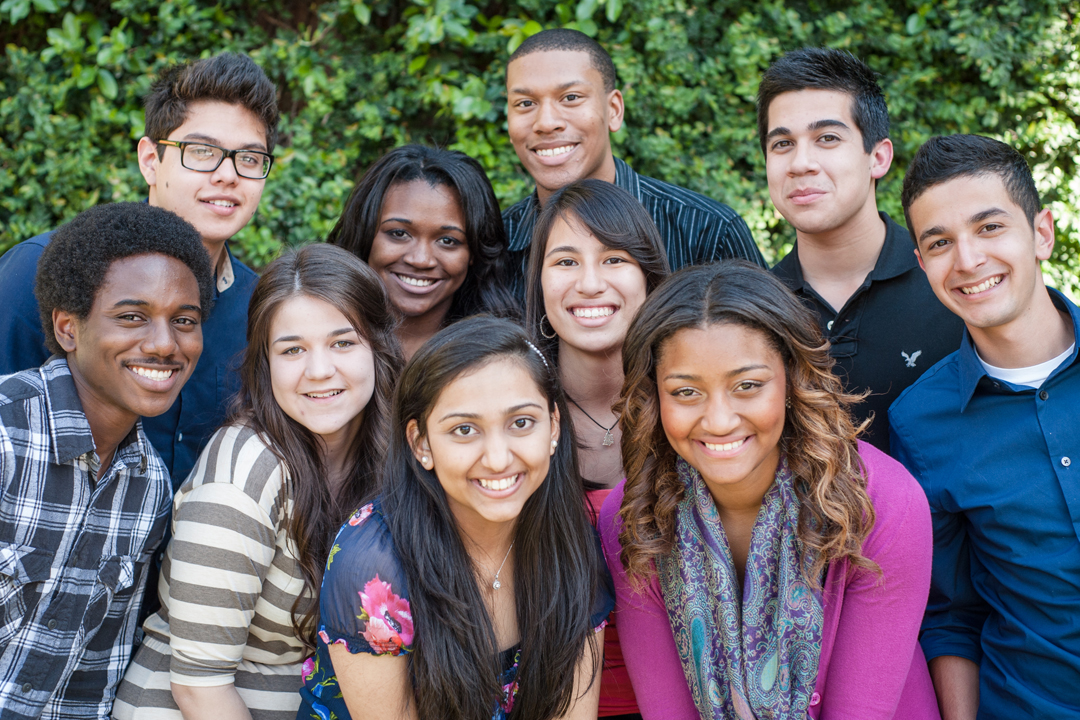 A cohort of Posse Scholars from 2014.

The university announced Wednesday that it is teaming with the Posse Foundation, a nationwide college access and youth leadership development program, to offer full-tuition leadership scholarships to select Atlanta-area public high school graduates.

The Posse Foundation identifies students with extraordinary academic and leadership potential that may be overlooked by traditional college selection processes and prepares them for admission to the nation’s top colleges. Ten Posse scholars will join GW each year, beginning with the first cohort in fall 2016. By the fourth year, 40 scholars will continuously be part of the GW community. Posse Foundation scholars achieve a 90 percent graduation rate.

“The Posse Foundation has created a powerful model for expanding college access to students from diverse backgrounds and supporting them in ways that ensure their success,” said George Washington President Steven Knapp. “This exciting partnership will enable us to enrich our campus with a new source of talented students and broaden the network of citizen leaders we provide to this nation and the world.”

Last month, the university announced a partnership with the nonprofit organization Say Yes to Education to provide full-tuition scholarships for public high school students from participating chapters in New York and North Carolina. To qualify, the students’ annual family income must be $75,000 or below.

In July, the university announced it would no longer require most undergraduate applicants to submit SAT or ACT test scores in response to recommendations from the university’s Task Force on Access and Success. The task force was formed in January 2014 after Dr. Knapp participated in a White House summit on college opportunity.

GW is one of Posse’s newest partners, joining schools like Boston University, Cornell University, Northwestern University, University of Pennsylvania and Vanderbilt University. The Posse program offers students the opportunity to pursue personal and academic excellence by placing them in supportive, multicultural teams—posses—of 10.

“Our goal is to connect outstanding students who have the drive, passion and intelligence to attend the best schools in the country and become our next generation of leaders,” said Deborah Bial, president and founder of the Posse Foundation. “We’re thrilled to have the support of President Steven Knapp and excited to have the George Washington University join us in this mission. GW has distinguished itself nationally for having an environment that pushes the boundaries of intellectual inquiry where students are actively engaged in putting their knowledge into action. GW is an ideal community for Posse scholars.”

From September to December each year, the Posse Atlanta team and GW staff will identify students who they believe can excel at the university. A three-part selection process offers students an opportunity to demonstrate their leadership abilities, skill at working in a team setting and their motivation to succeed. Finalists will be evaluated and selected by GW’s admissions office in early December and welcomed into the GW community at a celebration in Atlanta.

The concept of sending posses to college is rooted in the belief that small, diverse groups of talented students carefully selected and trained can serve as a catalyst for increased individual and community development. For 26 years, the foundation has realized this goal by working with its more than 53 partners at the nation’s top colleges and universities to award $806 million in leadership scholarships to young people.

“Posse Scholars reflect a great combination of smart, hard-working students who have challenged themselves in high school,” said Karen Stroud Felton, dean of admissions at GW. “We believe our future scholars will have the motivation and desire to flourish within the community.”

Following the selection process, Posse Scholars meet weekly with foundation staff and their posse for workshops focusing on team building, support and leadership development. Once at GW, Posse Scholars will participate in the foundation’s “Campus Program,” which works to ensure the retention of scholars and to increase their impact on the university. Posse staff will visit GW three times a year to meet with scholars, university liaisons and on-campus mentors. Once on campus, Posse scholars will team up with faculty, staff and other students for an annual retreat.

Other college access initiatives the university participates in include D.C. College Application Week, which is part of a national effort to increase the number of first-generation and low-income students who pursue a postsecondary education; an Early College Program at School Without Walls where students can pursue associate degrees from GW while still in high school; and workshops for high school juniors and seniors to provide tips on how to prepare and submit their college applications.

Nearly 70 percent of GW students received some form of financial aid from the university in academic year 2014-15.