Students will monitor urban air quality in Baltimore and perhaps decide to study engineering as a result.
November 9, 2022 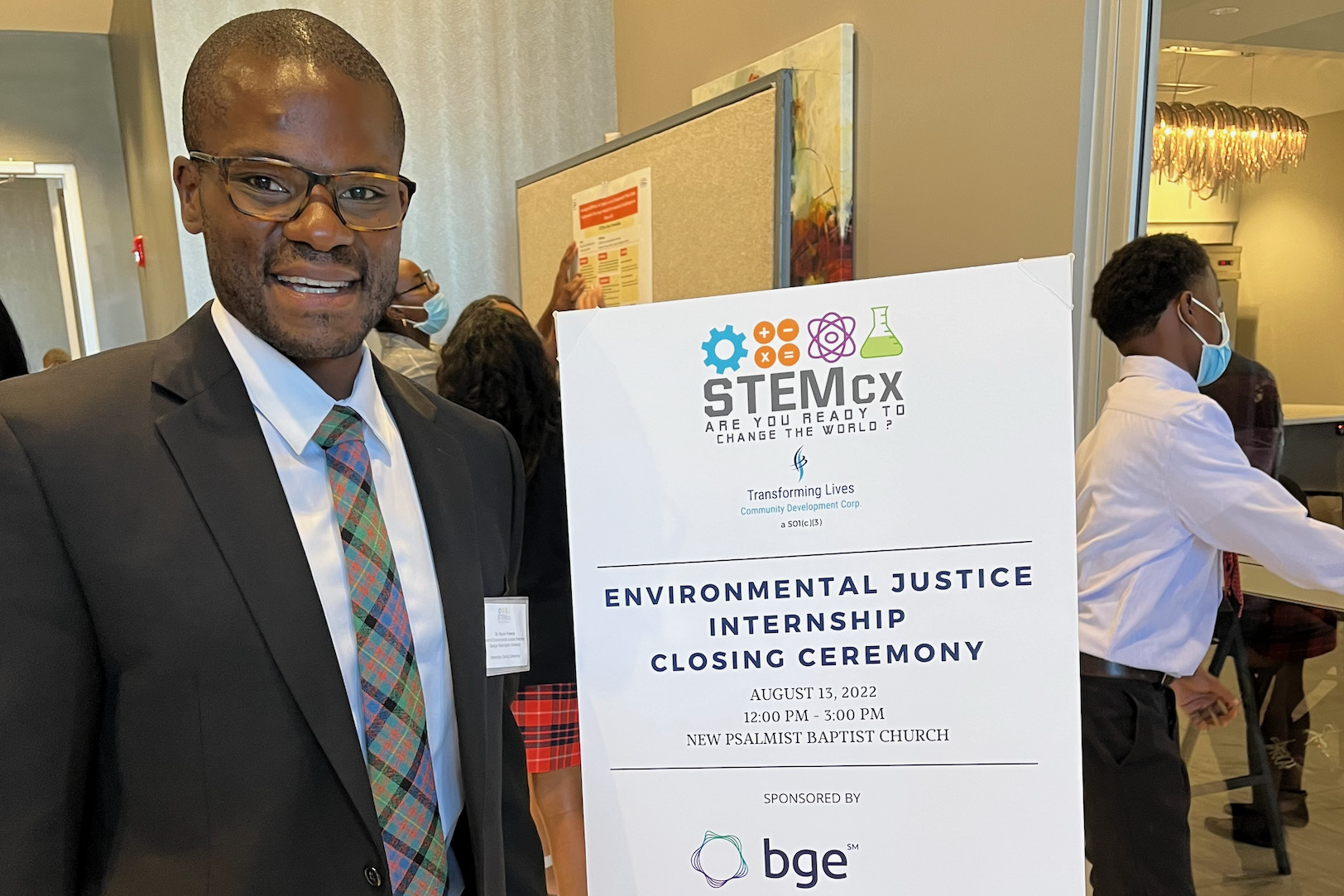 Royce Francis works with STEMcx to recruit summer interns who learn about technology.

Engineering may seem forbiddingly difficult to some would-be majors, but Royce Francis, an associate professor in GW’s School of Engineering and Applied Science (SEAS), is working to make it more inviting and accessible to students who will then apply their knowledge for society’s benefit. He was recently awarded a grant from the Public Interest Technology University Network (PIT-UN) that will help him achieve his goal.

In partnership with STEMcx (Science, Technology, Engineering and Mathematics Conference and Expo), an organization in Baltimore, Francis will work with eight high-school students chosen for paid internships this summer to create a system monitoring urban air quality using low-cost sensors. STEMcx is dedicated to inspiring students from underrepresented communities to pursue careers in STEM.

“There are fewer African American engineers and scientists and doctors than you would expect if you look at our proportion in the general population,” Francis said. “STEMcx is trying to increase the number of Black engineers and doctors and scientists by engaging people before they go to college. I designed the experiential portion of the internship with the goal of introducing students who might be interested in environmental justice to the ways that technology and science intersect in the field of environmental engineering.”

Francis was first introduced to environmental justice by Professor Kimberly Jones as an undergraduate at Howard University, where he studied civil and environmental engineering. Professor Jones described cases where waste management facilities were systematically located closer to communities of color, unfairly exposing them to the potential impacts of pollution. In her course, Francis first learned that many environmental management decisions rely not only on scientific or economic calculations, but also racial, social and political factors. Another pivotal moment came when he attended a lecture by Taft Broome, a professor of civil engineering with an interest in how engineering relates to policy.

“He talked about ethics and his example was designing a braking system for a tractor-trailer,” Francis said. “He designed the question in such a way that we would have to make a trade-off between cost and the ability to stop within a certain distance. And there was a wrinkle because if you make the brakes too strong, the load behind the tractor-trailer could run into the cab and injure the driver. So, there were a range of trade-offs in addition to cost and the ability to stop within a certain time, and he made us think about not only this engineering calculation, but how that calculation is going to touch somebody’s life.”

Seeing that Francis is interested in public policy, Broome encouraged him to apply to a program at Carnegie Mellon University in which Ph.D. students chose an engineering or technology problem with public policy implications. Later, commuting from Baltimore to Union Station, Francis realized he was inhaling smoke from the diesel trains as they idled in the terminal. He became interested in air quality while collaborating with Amanda Northcross, a former GW faculty member with expertise in designing equipment used for exposure analysis.

Not all of his interns this summer, Francis said, will go on to become engineers, but at least they will have the experience of working with technology on a project in the public interest. They will also learn from guest speakers who practice environmental justice advocacy, and begin to see how technology touches many different fields, rather than simply viewing it from a STEM perspective. They will see how elements of what engineers do could intersect with other career paths.

“I’m hoping that for students who do pursue STEM, this will help them persist through the major until they enter their profession,” Francis said. “A lot of schooling is kind of disembodied from practical experience. We do a lot of theory at the university level. There are some hands-on learning experiences, but there are a lot of courses that tend to be rigorous, difficult and theoretical, and those courses tend to put people off. Experiences out of the classroom, like these internships, improve the persistence of students through the major.”

The interns working on air quality this summer will have hands-on experiences that are connected to their communities and to social problems that they care about. As a consequence, they may find that engineering is not as intimidating as they perhaps thought.

“I would rather see engineering as art—as art that touches different parts of people’s lives,” Francis said, “and while I might not look like a typical artist in terms of the things that I do and how I present myself, I am hoping students interested in humanities would find our environmental justice program accessible.”