Colonials Come Back to Campus

Thousands returned to GW for Alumni Weekend, remembering their time in college and making new memories on campus.
October 31, 2016

Dorothy Robinson, B.A. ’01, attended some Alumni Weekend events with old friends she has stayed in touch with long after graduation. College classes and homework have changed a lot in the 15 years since she graduated, she said.

“I remember going to the computer lab all the time because no one had laptops,” she said.

Ms. Robinson and her friends were among the  excited and engaged alumni the university and the GW Alumni Association welcomed back to campus this past weekend. With more than 60 events, Colonials kept busy over the course of the four-day celebration with reunions, museum tours, athletics events, various campus and building tours, networking receptions, academic lectures and a concert, to name a few. Hands-on and family-friendly events—like making your own textile or attending the festive Boo Bash Halloween event—highlighted the weekend.

The class of 1966 celebrated its 50th reunion, earning their place in the Alumni Emeriti Society. Attendees included Edward “Skip” Gnehm, B.A. ‘66, M.A. ’68, and Sen. Michael Enzi (R-Wyoming.), B.B.A. ’66. George Washington President Steven Knapp told the group in remarks that while a lot may have changed since they were on campus—new buildings, a much more residential and connected community, enhanced progress in access and success—the vision George Washington had still shapes the direction of the university today, as it did when they were in school.

“One of the things he emphasized was this notion of bringing together students from all across what were then the 16 states so they could come together, form those lasting friendships and become the core citizen leadership of the new republic,” Dr. Knapp said. “That was his vision for the university, and I think we continue to do that.” 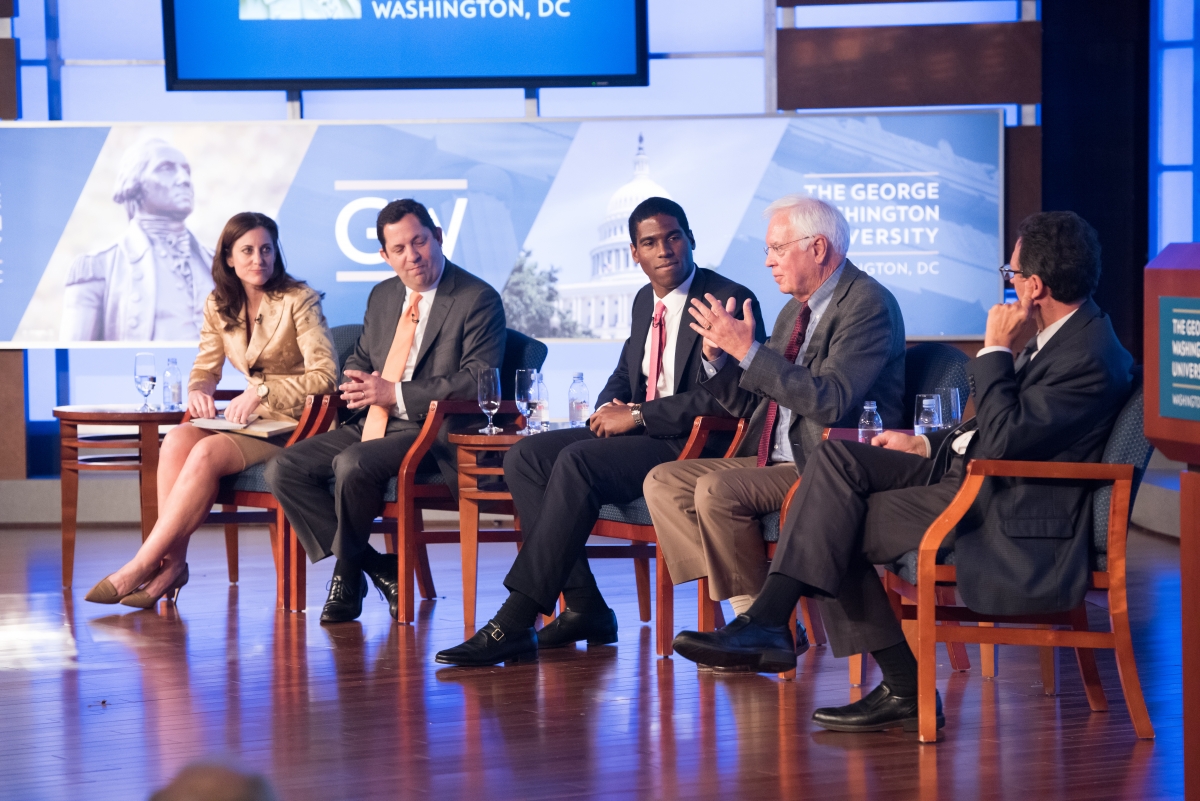 A discussion on the 2016 presidential election.

Meanwhile, at the kickoff party on University Yard on Friday, Ms. Robinson and her friends Courtney Cosentino, B.A. ’01, and Beth Faraguna, B.A. ’01, remembered spending their weekends hanging out at Lindy’s Red Lion and their off-campus apartments. Ms. Cosentino said she spent a lot of time between classes and the newly built Kogan Plaza her junior year.

More than a decade after graduation, Ms. Cosentino said, “a majority of my friends are from GW.”

A Message to GW Alumni and Parents from President Steven Knapp

This fall we have enjoyed two remarkably successful weekends on which our campuses were graced by visits from alumni and from the parents and other family members of our current students.  I have been attending these events for ten years now, and it seemed to me that both the turn-out and the spirit on both Colonials and Alumni Weekend moved this year to the very top of the list.  Just one example: attendance at the “Taste of GW” this past Saturday was so large that, for the first time ever, our alumni vendors ran out of food long before the event was over!

As you know, this tenth time around was my last in my current role.  With that in mind, I wanted to pause to thank everyone who has attended these action-packed, often inspiring, always entertaining weekends during my tenure as president.  I want equally to thank all those who have not been able to come to George Washington for a weekend in the fall but are nevertheless a vital part of our life-long and world-wide GW community.  Whether you are a GW graduate, the parent or family member of a GW student, or all of the above, I am grateful for your support over these many years and hope you will continue to regard the George Washington University as your cultural and intellectual home in the heart of this nation’s capital.