President of the Metropolitan Museum of Art, surgeon general of the United States Army among those honored at Alumni Weekend kickoff event.
October 31, 2016 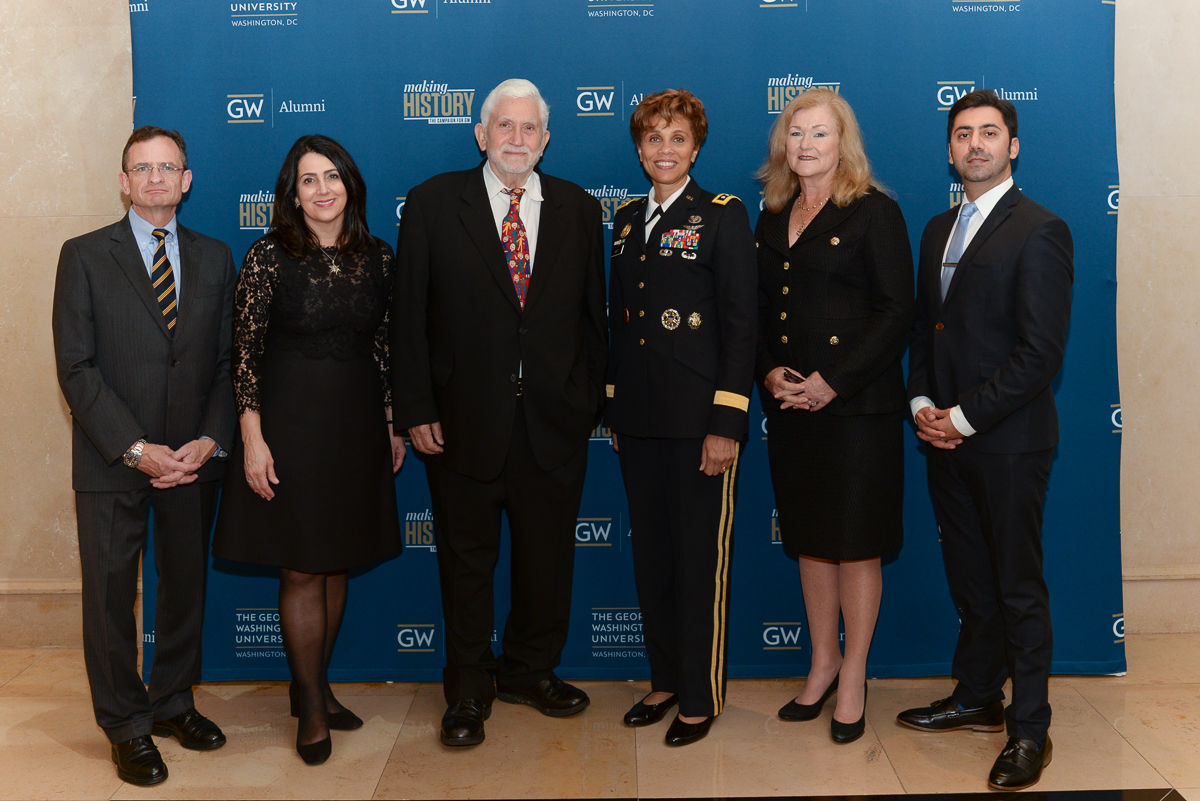 The university honored the accomplishments of six of its alumni at the 80th annual Alumni Achievement Awards on Thursday, kicking off a four-day Alumni Weekend celebration.

George Washington President Steven Knapp said in introductory remarks that while the university contributes to society in many ways, alumni are the most important part.

“It is through our alumni above all—alumni like the ones whose stories we’ll hear tonight—that we really are making history,” he said.

The Alumni Achievement Awards, created in 1937, recognize GW graduates who have distinguished themselves through notable achievements in their professional and personal lives. The awards are the highest form of recognition given by the George Washington Alumni Association to a GW graduate annually. Past recipients include 16-time NBA champion Arnold “Red” Auerbach, B.S. ’40, M.A. ’41; Nobel Prize winner Julius Axelrod, Ph.D. ’55; actress Kerry Washington, B.A. '98; and former U.S. Secretary of State Colin Powell, M.B.A. ’71.

“The accomplishments of these awardees reflect upon our alma mater and bring honor to all of us as a GW alumni community,” said Jeremy Gosbee, B.A. ’98, M.B.A. ’02, president of the GW Alumni Association.

Here are excerpts from what the 2016 recipients had to say after receiving the honor:

“It is hard to believe that it has been almost 40 years since I became an alumna of GW law. No matter where I’ve gone it always seems to come back to Washington and GW.”

—Corinne E. Ball, J.D. ’78, partner at Jones Day
Ms. Ball is co-head of Jones Day New York office’s Business Restructuring and Reorganization Practice and leads the firm's European Distress Investing Initiative. Her 30 years of experience include leading a team of attorneys representing Chrysler with its successful Chapter 11 reorganization. She is also a director of the American College of Bankruptcy and the American Bankruptcy Institute.

“I had to be on call from midnight to 7 a.m., six days a week to perform emergency laboratory tests on, usually, very sick children. These experiences, which led me at times to snooze in some of my classes, helped me decide to become a pediatrician. Because of my research background and interest, I was intent not only on improving children’s healthcare but also on finding new ways to prevent some diseases … and to develop novel methods and drugs to heal the afflicted. So I am very grateful to GW for launching me in my life career that started, I must say, with much lack of sleep.”

“I really feel like without the leadership of my professors here, the entrepreneurship class that I took, the courage that it gave me to explore new technology and to believe in myself—I was very shy when I got here—to believe in myself enough to say I’m going to take a risk, and I’m going to jump in my car and move to California and be part of this digital revolution.”

—Baroness Joanna Shields, M.B.A. ’87, under-secretary of state and minister for Internet Safety and Security in the UK
Ms. Shields is a technology industry veteran and parliamentarian currently serving as the UK minister for Internet Safety and Security and a life peer in the House of Lords. She was previously digital economy adviser to former Prime Minister David Cameron and chair of TechCityUK. She started her 25-year career in Silicon Valley and helped build world-leading companies: EFI, RealNetworks, Google, Bebo, AOL and Facebook. In 2014, she founded WeProtect.org, a global initiative uniting 63 governments, NGOs and industry to protect children from sexual abuse and exploitation online. She received an honorary degree from GW in May.

“I can say honestly and candidly that GW has given me the life that I have gotten to live. When I got to GW as a freshman, I actually was going to be a political science major. I was deeply interested in politics and the study of government. And I maintained that interest assiduously and thoughtfully until October of my freshman year. It became clear to me that there were many other areas of interest that I could explore.  I walked into the art history introductory class, a class that I took because, as it happened, the woman I was very interested in was taking art history, and I thought this was a good way to build a relationship with her. And when I walked in that classroom it changed my life.”

—Daniel H. Weiss, B.A. ’79, president of the Metropolitan Museum of Art
As the fifth president of the Metropolitan Museum of Art, Dr. Weiss is responsible for all day-to-day operations of the institution, including oversight of 1,500 employees in all areas of museum administration. Previously, Dr. Weiss served as president of Haverford College and Lafayette College and dean of the Zanvyl Krieger School of Arts and Sciences at the Johns Hopkins University.

“I really didn’t do anything special. I just showed up and did what I was told and relied on a lot of great people to steer me in the right direction—friends, colleagues, mentors and of course family.”

“I did have one thing which I think was important. That was passion. Passion to bring about change. My time in D.C. and my time at GW made me realize the importance of community service.”

—Hussain Nadim, B.A. ’10, senior expert on Pakistan at the United States Institute of Peace
Mr. Nadim was previously founding director of the Peace and Development Unit, Ministry of Planning, Development and Reforms of the Government of Pakistan. Named a Forbes 30 Under 30 Global Leader in Law and Policy for his work, Mr. Nadim is recognized as one of the leading experts on security and defense. He has also served as a scholar at the Woodrow Wilson Center in Washington, D.C., and an adjunct fellow at the International Center for Study of Radicalization (ICSR) at King's College London. Mr. Nadim received the Recent Alumni Achievement Award, given to graduates of the past 10 years who have attained notable achievements in their field.