The World Is a Classroom for Virtual High School Students 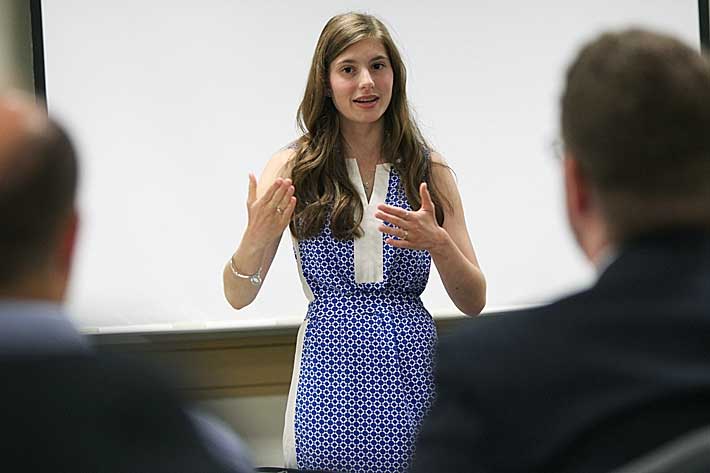 Sarah Depew, a member of the GWUOHS senior class, makes her capstone presentation before her graduation Saturday. (Photo: Rob Stewart)

Stuck in Denver International Airport after missing a flight, Sarah Depew did something most high school students couldn’t have managed. She used the time to attend English class.

Sarah graduated Saturday from the George Washington University Online High School (GWUOHS), a private, accredited virtual high school providing more than 100 college prep and elective courses. A partnership between the George Washington University and online learning service K12, GWUOHS is now beginning its fifth year and has expanded from a 16-student pilot program to a community of more than 150 middle and high school students.

At the ceremony Saturday, 13 graduating seniors from a class of 29 attended with their families, many meeting each other and their teachers for the first time face-to-face. Their classmates could watch from their homes as far away as Costa Rica and India on a livestream of the ceremony, which featured remarks from K12 Vice President of Content and Curriculum David Pelizzari.

According to a study published in March by the National Education Policy Center at the University of Colorado, there are 400 virtual schools operating in the United States, with an estimated 263,700 students enrolled. GWUOHS Associate Head of School Maria Coyle says there are many reasons students and their families may choose virtual schools. Some of the students have time-consuming activities like music or athletic careers, while others may have families who travel frequently or have health concerns that would complicate school attendance.

The unique curriculum and structure of an online high school may actually prepare some students better for higher learning and careers than would a traditional brick-and-mortar education, said Michael Corry, director of research for GWOHS and director of GW’s Center for the Advancement of Research in Distance Education in the Graduate School of Education and Human Development. Students in virtual high schools have experience with widely-used technologies like Blackboard and Skype, he said. They are expected to be self-directed learners in ways that college students often must be to succeed.

“Some of these students actually have a leg up on their peers,” Dr. Corry said.

Sarah’s family would agree with the assessment. They are steeped in education and educational research—Ms. Depew’s grandmother, a researcher at the Stanford Research Institute, conducted one of the first comparative studies between homeschooled and traditional students—and were open to alternative schooling methods from Sarah’s childhood, said her mother, Susan Depew.

“As parents, we were accountable for paying attention to [our children’s] passions and facilitating them,” Susan Depew said of herself and her husband Mark Depew, vice president of business development at an energy company in Houston. When Sarah evinced an early interest in and talent for community service, the Depews started looking for ways to make that possible. From teaching three dozen of her fellow Girl Scouts to knit shawls for disadvantaged children to volunteering at the Houston Museum of Natural Science, her daughter has been able to pursue projects that would have been made impossible by a traditional schedule, Susan Depew said.

Sarah’s first high school was a brick-and-mortar private school in Houston. She attended for a year, but found it limiting. On her return to independent education, Sarah said, she chose GWOHS after an exhaustive selection process. “We didn’t want to sacrifice academic rigor for flexibility,” she said.

Like many GWOHS students, she is an exceptional student and the recipient of multiple merit fellowship offers, attending Bryn Mawr College this fall as a Presidential Scholar. The 29-member class received more than $1.1 million in scholarship offers and awards.

The structure of Sarah’s education has been analogous to the Internet itself, her mother said.

“Not only does it exist in this sort of surreal space, but also within that space there are a million connections, and they’re three-dimensional,” Susan Depew said. “One of the things this learning environment has fostered in [Sarah] is the ability to make those connections between different subjects. Science, math, history, art, music.”

Added Sarah: “They’re not separate. I was able to break down the walls between all of them.”

Even vacations could be intertwined with education without sacrificing enjoyment, as when the family drew on Sarah’s curriculum on Impressionism before visiting France. Nor did the nature of virtual high school detract from Sarah’s social life, her parents said. “The challenge was knowing when to say no to social opportunities and yes to finishing her work,” Susan Depew said, laughing.

“It’s the same as any school that way,” her daughter agreed.

Sarah says her own educational experience fostered in her a passion for education. Although she will focus on engineering in college, she also has an interest in communication and in “making learning fun.”

“It sounds cliché, but it’s true,” she said. “[Learning] can be the most amazing Venn diagram ever.”