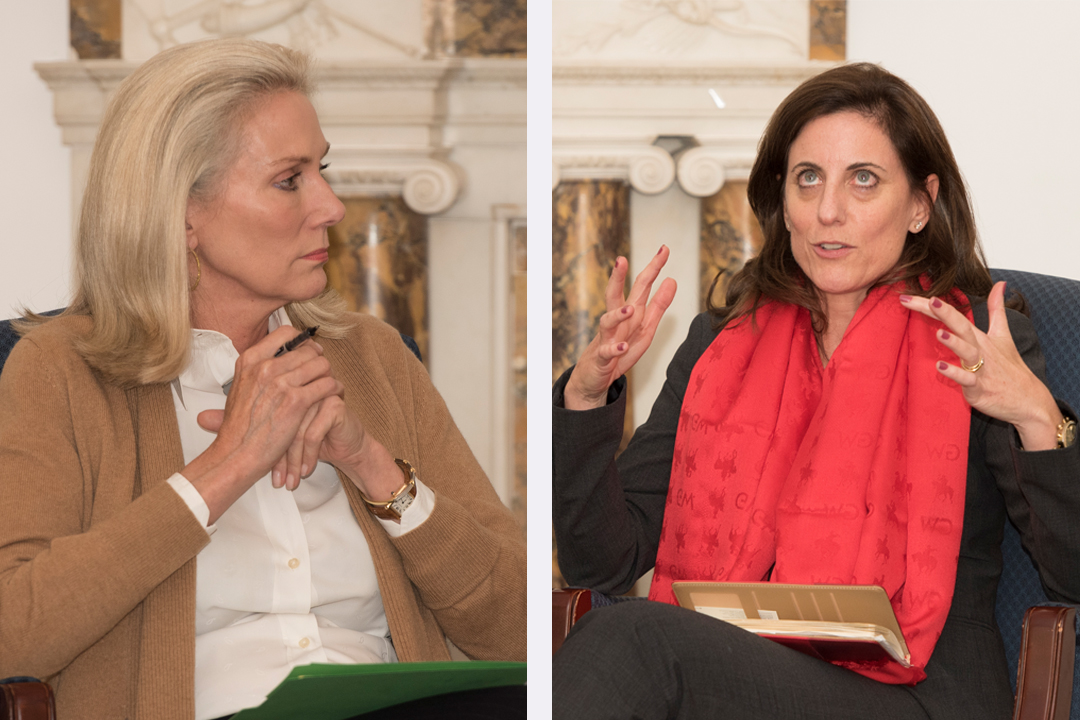 A combination of factors, including fast news cycles, political posturing and a trend of producing news as entertainment, have played a role in a historical low point for public discourse in the United States, according to Cynthia Steele Vance and Lara Brown.

“We are seeing very little civility in politics these days,” said Ms. Vance, B.A. ’79, in a conversation Thursday on the Mount Vernon Campus with Dr. Brown, director of GW’s Graduate School of Political Management.

The event, a discussion on the lack of cooperation, collaboration and civility in national politics, was presented by the Elizabeth J. Somers Women’s Leadership Program (WLP), a selective, year-long, program for freshmen women. The WLP program is offered exclusively at the Mount Vernon Campus, which holds special significance for Ms. Vance, a member of the GW Board of Trustees. She earned her bachelor’s degree from Mount Vernon College.

Ms. Vance, an on-air host and former news journalist for Fox, asked, “How can we get back to civility in politics?”

According to Dr. Brown, political discourse will get worse before it gets better. “It’s going to be tumultuous, and it’s going to be ugly,” she said.

Ms. Vance pointed to the 24/7 news cycle as a contributor to the lack of civility in politics. Dr. Brown agreed to an extent.

“I think the media is culpable in that the media decided that the news should be entertaining,” she said. “News should be substantive and challenging, rather than simply reconfirming one’s personal beliefs and world view. News also should not incite emotions as if it were the build up to a wrestling match.”

Dr. Brown noted that also at play is the public’s short attention span, which can lead to posturing by politicians. The constant shouting matches between political leaders may invigorate some voters, but they don’t serve well as a governance strategy.

The GSPM director outlined what she said are three traits of successful leaders: curiosity, courage and heart. While many U.S. presidents have possessed two out of three of those characteristics, she said that no U.S. president yet has had all three in large quantities. The third quality, heart, seems to be lacking most often, she said.

Ms. Vance said that showing too much heart can be interpreted as a weakness, especially as it relates to women leaders.

Dr. Brown countered that historical leaders such as Mahatma Gandhi, Martin Luther King Jr. and Jesus Christ each made themselves appear vulnerable. “All [of those leaders] are displays of vulnerability, or heart, before power or dogma,” Dr. Brown said.

Great leaders are also great communicators, said Dr. Brown. They educate as they persuade, without talking down to people. In the current climate, political leaders aren’t communicating well, she said, which diminishes their efficacy significantly.

In addressing the goals of the WLP to shape and mold future women leaders, Ms. Vance advised students to “be kind.”

Dr. Brown encouraged students to take risks, challenge themselves, find a mentor and take at least one statistics class. Be courageous and vulnerable.

In reality, leaders make up a very small part of the national population, with women having fewer leadership roles in both the current political system and major boardrooms. For the attendees aspiring to be one of the few, Dr. Brown told them not to be deterred. 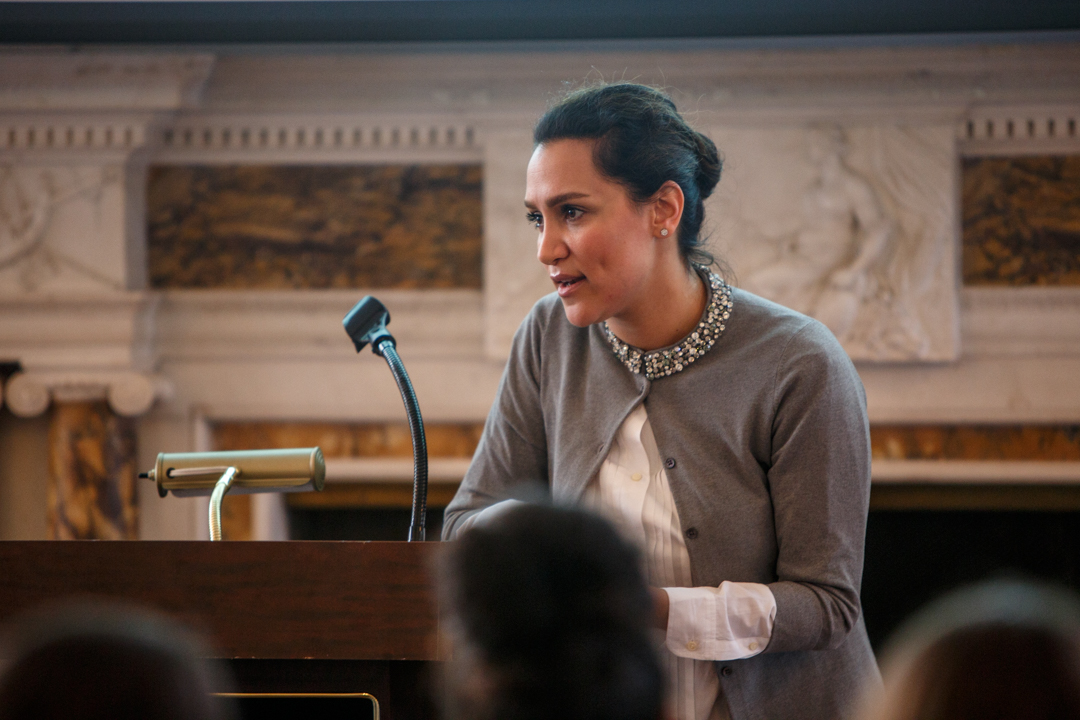 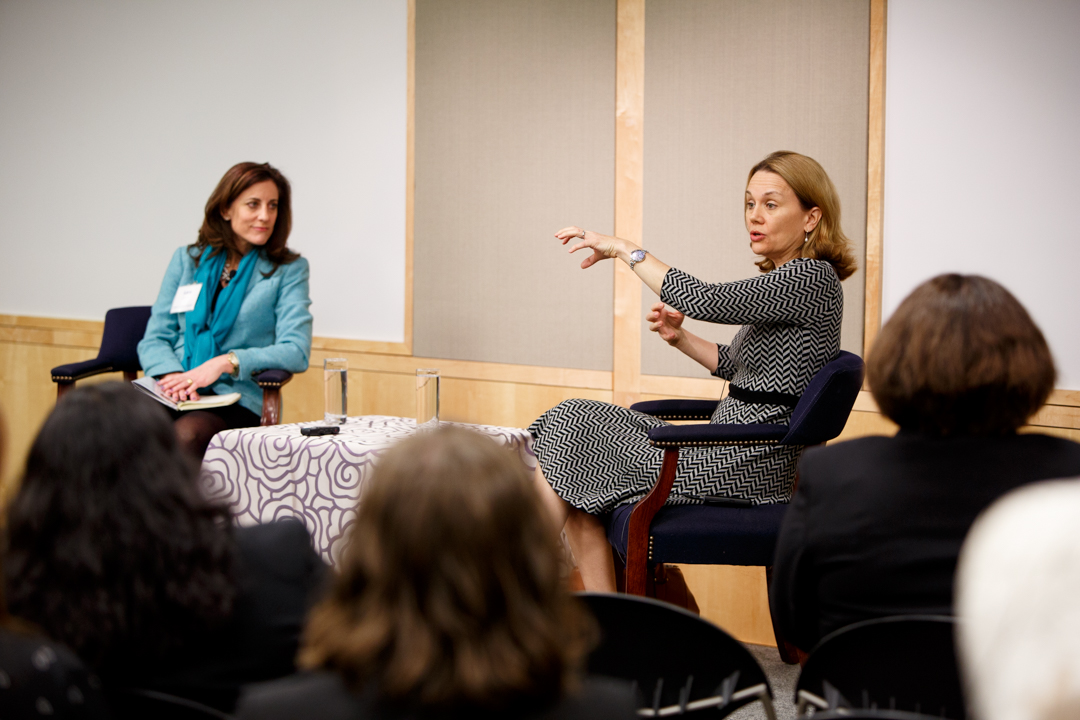