At the U.S. Supreme Court, Race Is on the Docket 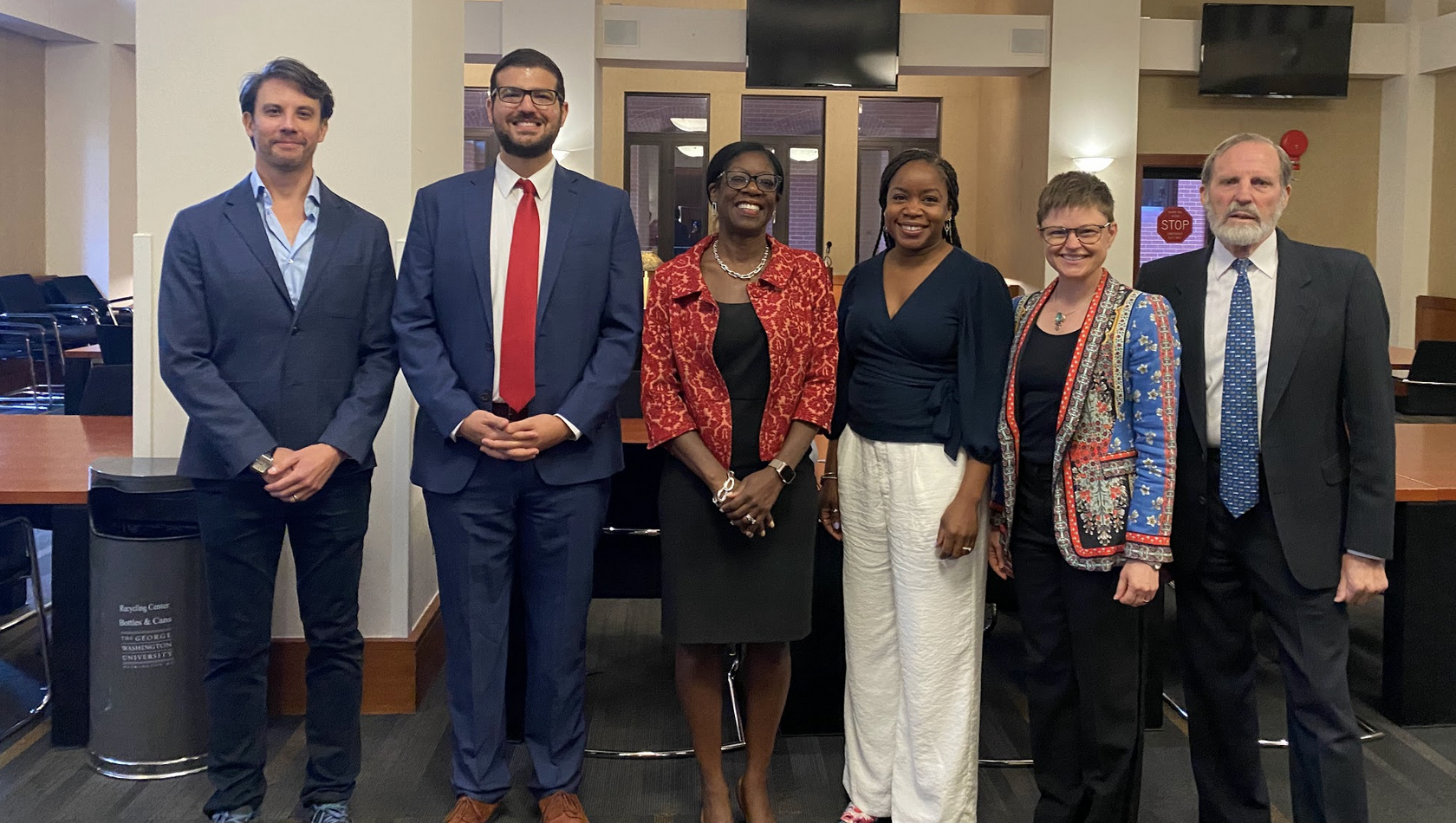 A panel of legal experts convened Tuesday at GW Law to review cases currently on the docket of the U.S. Supreme Court and to offer educated guesses about how the court will rule. At this year’s installment of the highly anticipated annual event, held in the Law School’s Jacob Burns Moot Court Room, panelists agreed that race is the court’s dominant theme for this term.

GW Law Dean Dayna Bowen Matthew welcomed panelists and told the audience that she hoped they would “leave here today with a better understanding of the importance and critical implications of each case on the docket.”

Stohr presented upcoming cases on race-conscious admissions, one at Harvard and the other at the University of North Carolina at Chapel Hill. In both cases, Stohr noted, affirmative action is being contested.

“There are now six conservative-leaning Republican-appointed justices on the court vs. three liberal-leaning Democratic-appointed justices,” Stohr said. “Most of those on the conservative side have expressed antipathy to the constitutionality of affirmative action, which makes it likely that it will be deemed unconstitutional in this case.”  Stern agreed, observing that cases like this are being brought to take advantage of the new conservative majority on the court.

“What we’re seeing as the court shifts further and further to the right,” Stern said, “is a relatively small group of very high-powered conservative lawyers kind of manufacturing these vehicles for the court to achieve what I would consider policy goals, what they call legal goals.”

Anti-gay belief comes back to the court

The next case under discussion was 303 Creative LLC v. Elenis, presented by Morrison, the Lerner Family Associate Dean for Public Interest and Public Service Law, and professorial lecturer in constitutional law. In this case, the owner and founder of a graphic design firm in Colorado wants to design wedding websites but to exclude same-sex weddings, despite Colorado law stating that businesses may not discriminate against LGBTQ+ customers. The designer, Lorie Smith, argues that this violates her right to free speech under the First Amendment.

“The case is quite odd,” Morrison said, explaining that Smith has never had a request to design a website for a gay wedding, but merely contends that she doesn’t believe she should be required to do so. “She argues she’s not discriminating against gay people, but only against same-sex weddings,” said Morrison, who has argued 20 cases before the Supreme Court.

“If this was one of my cases that I had up there, they’d kick me out,” Morrison said, because there’s no standing and no injury. The case is essentially a revival, he added, of the earlier case Masterpiece Cakeshop v. Colorado Civil Rights Commission, in which a baker argued for the right to refuse to create a wedding cake for same-sex couples.

Noting that the U.S. government supports Colorado in this case, Morrison said he nonetheless predicts that the court will decide in favor of the designer.

Bad news for the EPA?

Hammond, vice provost for faculty affairs and the Glen Earl Weston Research Professor of Law, is an expert on energy, environmental, and administrative law. She presented details of the case Sackett v. Environmental Protection Agency, in which the issue is whether wetlands are “waters of the United States” under the Clean Water Act.

“We know that wetlands provide all kinds of important ecological benefits. They protect areas from flooding; they act as filters; they promote biodiversity,” Hammond said. For the past several decades, she added, there has been a consensus that wetlands adjacent to navigable waters should also be considered navigable waters.

“The challenges start to come when you look at how land is developed over time,” Hammond said, noting that the Idaho couple who brought this case dumped gravel and sand on a wetland on their property and were then told by the EPA that they had to remove the gravel and sand because their wetland was protected.

“I do think that the court is likely to narrow EPA’s jurisdictional authority,” Hammond said. She later suggested that there may be a racial subtext to the conservative legal agenda in cases such as this one.

“Even in the administrative law cases,” she said, “we’re seeing a court that’s increasingly skeptical of broad delegations of authority to agencies.” Agencies under the Biden administration, she added, are working on many fronts to advance equity; thus, narrowing agency authority may be an indirect way of curbing government power to pursue an equity agenda.

Discussing Merrill v. Milligan, a voting rights case, Chung explained that the Republican-led state legislature in Alabama drew a new congressional map with only one Black-majority district (of seven districts in the state), raising issues of race-based line drawing given that the state’s current Black population is about 27 percent of the total.

The plaintiffs in the case argue that they don’t have equal opportunity to vote for representation of their choice. Previously, a three-judge panel (with two judges appointed by Donald Trump and one appointed by Bill Clinton) ruled strongly for the plaintiffs and ordered the legislature to come up with a redistricting plan that would more accurately reflect the state’s population.

“It’s a huge case,” Chung said, “because of the arguments that are being used in the case by Alabama. Alabama is saying that race cannot be used in determining, in the redistricting context, whether there was a Voting Rights Act violation. And that is starkly in contrast to the way the VRA has been applied for decades.”

Another election-related case, Moore v. Harper, was presented by Stern. At issue in this case is whether, under the U.S. Constitution, state legislative bodies have sole authority to regulate the time, place, and manner of conducting federal elections, even when a state constitution makes their decisions subject to review by the state’s courts.

Republicans appealed, Stern said, “on a theory that is called the independent state legislature theory—the most terrifying theory you may never have heard of. Under this theory, state legislatures have essentially unlimited authority to set the time, place and manner of federal elections—not only the rules of who can vote, how and when they can vote, things like whether you can vote by mail ballot and when those ballots should be counted—but also to draw congressional districts without interference by state courts or potentially even state executive officials. If we take this theory to its logical extreme, it would mean that a governor cannot even veto a legislative map, as they can in many, many states.”

This theory has been repeatedly rejected by the Supreme Court in the past, Stern noted, but is a pet project of Justice Brett Kavanaugh, who tried to prevent mailed ballots from being counted in Pennsylvania in the 2020 presidential election.

“I think it’s very clear that Kavanaugh is on board with this theory, and that Gorsuch, Alito and Thomas are on board with this theory,” Stern said. “The question really, I think, now comes down to Amy Coney Barrett, and whenever the fate of democracy lies in Amy Coney Barrett’s hands, you should be very worried if you share my views about what counts as democracy and what doesn’t.” He added that he is unsure how she will vote.

“I can’t say I look forward to finding out,” he said, “but this is the case to watch if you are worried about efforts to stage another coup in 2024 or reject the results of federal elections. This is the tool that Republicans have decided to use to try to overturn elections and to rig the rules to ensure that they win.”

After highlighting all of these cases and several others past and present, the panel concluded by taking questions from those in attendance on topics such as the history of concern about legitimacy of the court and the likely impact of the recently appointed Justice Ketanji Brown Jackson to the court.

“Obviously, Justice Jackson’s practical influence will be severely diminished,” Chung said, given the court’s conservative majority. “But justices in the minority often have a powerful voice through dissent, and she might offer some interesting dissents.” 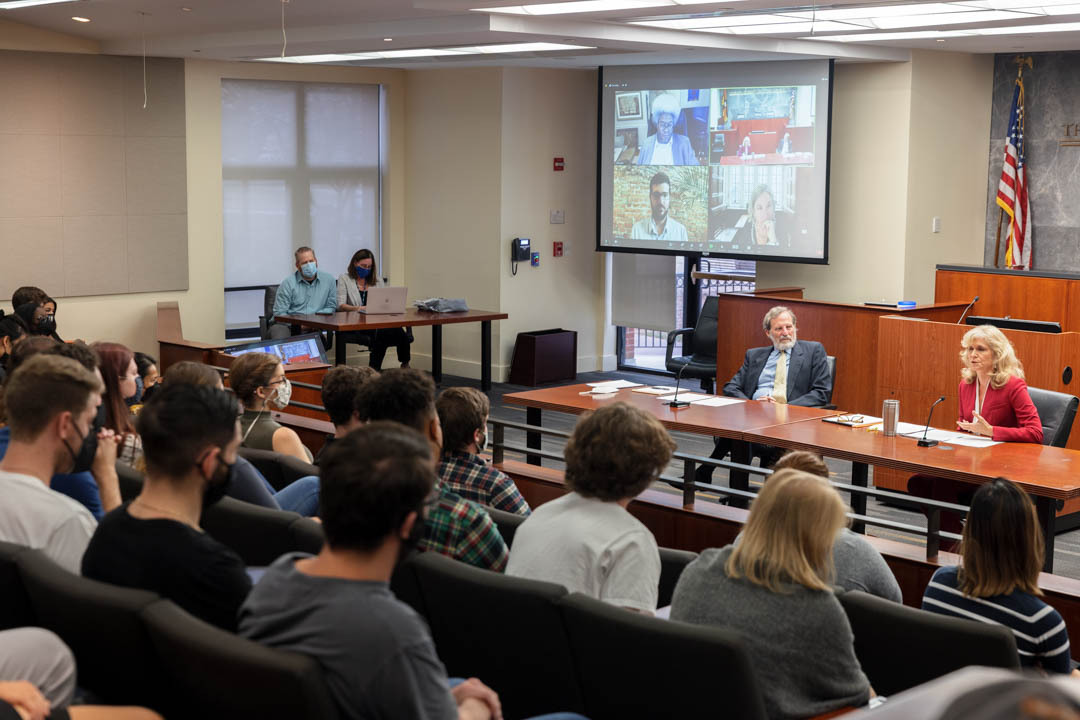