University to Enter Collaboration with Corcoran, National Gallery of Art 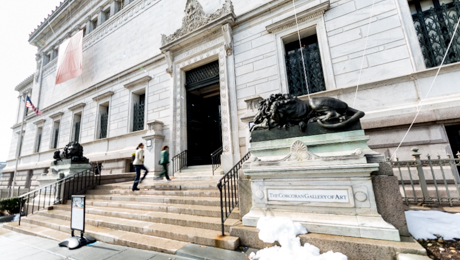 The George Washington University, the Corcoran Gallery of Art and Corcoran College of Art + Design, and the National Gallery of Art announced a proposed collaboration Wednesday that would significantly raise the stature of arts education in Washington, D.C.

The arrangement would generate new arts and interdisciplinary programming at GW, preserve gallery space in the Corcoran’s 17th Street building and continue the legacy of the Corcoran School of Art + Design. The university would receive the buildings, the school and other assets from the Corcoran as part of this historic collaboration.

“The George Washington University will work with the Corcoran to create a world-class arts education program in close affiliation with the National Gallery of Art,” said George Washington President Steven Knapp. “Such a program, situated in an iconic Washington landmark, will offer unparalleled opportunities for students and scholars, and provide a powerful new focus for the arts in the heart of our nation’s capital.”

On Wednesday, the three institutions entered a discussion period to explore definitive terms of collaboration. The broad shape of the agreement includes integrating the Corcoran College of Art and Design into GW. As part of the proposed deal, GW would be given the Corcoran's Beaux Arts building on 17th Street and the Corcoran's Fillmore building in Georgetown.

“This coalition among our three institutions will open important new possibilities for Washington, D.C.,” said Peggy Loar, interim director and president of the Corcoran Gallery of Art and Corcoran College of Art + Design. “The Corcoran’s great cultural, educational and civic resources that are at the heart of this city will not only remain in Washington but will become stronger, more exciting and more widely accessible in a way that stays centered on the Corcoran’s dedication to art and mission of encouraging American genius.”

The George Washington University and the Corcoran have a rich history. William Wilson Corcoran served as the president of the university’s Board of Trustees from 1869 until 1872 and donated generously to the university. In 1884, he founded the Corcoran Scientific School, which is now the GW School of Engineering and Applied Sciences. He also donated a building on H Street that served as the location for the School of Medicine and later as the university hospital from 1898 to 1948. In 1924, Corcoran Hall on the Foggy Bottom Campus was dedicated to honor Mr. Corcoran’s memory.

“It’s inspiring to see this history of the deep connection between the Corcoran legacy and our university coming back to life in this exciting new form,” said Dr. Knapp.

Mr. Corcoran founded the Corcoran Gallery of Art in 1869 and donated additional funding to establish the Corcoran school in 1878. The Corcoran’s collection includes more than 17,000 works and objects and is considered one of the best American art collections in the world. In 1897, the institution moved to its present location on 17th Street. The Beaux Arts building was designed by Ernest Flagg and is considered a premier example of the style.

Located on the National Mall, the National Gallery of Art houses one of the finest collections in the world illustrating major achievements in painting, sculpture, decorative arts and works on paper from the Middle Ages to the present.

“All of us at the National Gallery of Art are excited at the prospect of working with the Corcoran and the George Washington University in a unique collaboration that ensures the Corcoran legacy, keeps the core collection in the nation's capital and offers great opportunities for exhibitions of contemporary art and programming,” said Earl A. Powell III, director of the National Gallery of Art.

The new education and programming will complement the university’s existing range of outstanding arts programs that include theater and dance, music, fine arts, interior and architectural design, and museum studies. It will also further capitalize on GW’s proximity to cultural institutions that are among the best in the world.

“This is an exciting opportunity for us to dramatically enhance our arts and arts-related footprint in the academic community and in Washington, D.C.,” said Ben Vinson III, dean of the Columbian College of Arts and Sciences. “The Corcoran and the National Gallery of Art are titans in the art world—our new collaboration with these two cherished entities will instantly elevate our endeavors in the field.”

“The collaboration will strengthen our capacity to support the aspirations of our students who come here for the kind of exciting urban experience they can only really acquire in a great international capital city,” said Dr. Knapp.