After Ukraine’s president met with President Biden, the country’s agriculture minister discussed ways that the Environmental and Energy Management Institute at SEAS could help to address the impact of climate change on the Eastern European country.
September 7, 2021 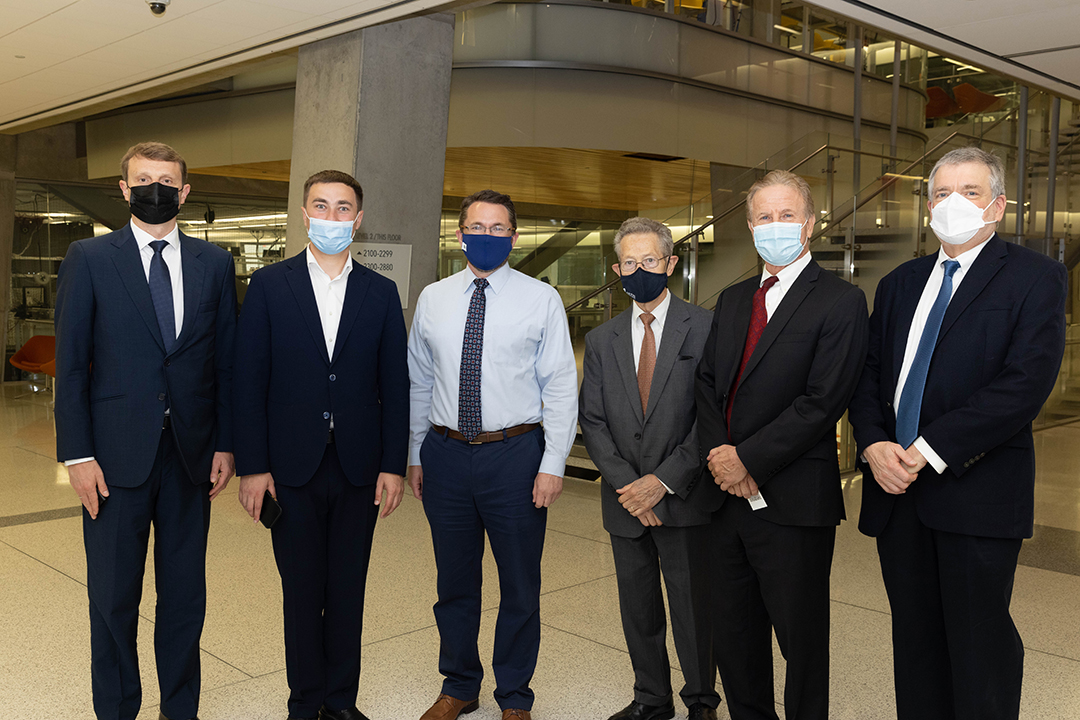 The day after President Joe Biden met with Ukrainian President Volodymyr Zelensky last week to renew a defense and security pact between the two countries, Ukraine’s agricultural minister came to George Washington University to meet with experts from the Environmental and Energy Management Institute (EEMI) to explore working together to mitigate the impact of climate change on the country’s agricultural sector.

Agriculture is a major part of the economy in Ukraine, which accounts for one-third of the most fertile soil in Europe. In recent years, production has been hit by a serious drought. Ukraine’s Minister of Agriculture Roman Leshchenko said this summer the country’s Weather Institute reported record breaking temperatures—the hottest night in 140 years in one instance.

“We need new technologies. We need competence in our education program just to change our environmental philosophy,” he said, “because Ukraine will really lose a lot of fantastic land [due to global climate changes] without the highest level of water management.”

Jonathan Deason, co-director of EEMI and a professor in the School of Engineering and Applied Science, invited professors, graduates and others associated with the Institute to a Q & A session with the minister and an adviser, Aleksey Sukanov.

“Climate change is having a big impact on them, particularly southern Ukraine but pretty much all of Ukraine,” Dr. Deason said. “They don’t have enough water and so how to adapt to climate change with sustainable water management, that’s where we come in.

“We’ll look at sources of water that aren’t being used, or aren’t being used appropriately, like ground water resources, optimization of surface water resources, with multiple reservoir management and things of that nature,” he said. Under a proposed partnership, GW would help find external research grants, conduct educational exchange programs and provide technical assistance.

After the Q & A, the Ukrainian delegation met with SEAS Dean John Lach and was invited to lunch with the EEMI team, including EEMI co-director professor Joe Cascio and visiting scholar Mark Pollins. Though the primary focus of the partnership would deal with the technical aspects of climate change, Ukraine has spent the past 30 years emerging from the former Soviet Union’s dominance. Even now, Ukraine is in an ongoing military conflict in its eastern region with Russia and interference in its national politics. The partnership would involve cultural and political challenges and several GW schools and disciplines.

John Forrer, an associate research professor of strategic management at the School Business and public policy associate faculty at the Trachtenberg School of Public Policy and Public Administration, asked about Ukraine’s openness to private investment in projects that would cost billions of dollars.

“For all the topics we talk about, someone has to pay for them,” he said, “so we always try to think about how we can martial that capital in order to go into the projects that will be well designed.”

Dr. Leshchenko said that Ukraine is moving in the direction of privatization and described in detail the past two years of land reform that now allows the sale of state land and the taxing of lands seized during the transition to independence. Initially opposed by most Ukrainians, the measure was recently passed by Parliament.

Dr. Leshchenko, who spent 12 years studying land law, said he would adopt that model to address water rights that the state now controls to provides access to water for irrigation for agriculture and other usage, using pumps, canals and other infrastructure.

“In Ukraine, [because of socialism] it is really hard to invest in private sector right now,” he said, “So I move step by step as with land reform… but in future just develop more and more private sector,” which he said could lead to the creation of a pilot for a public-private partnership by next year.

“I’m very practical. I’m not just in theory,” he said. “I know we need to do this, move this in a short period of time.”

Environmental issues can be complicated, said Dr. Deason. “That is why the Institute is so appropriate because we have people from all the different schools” who not only have the knowledge to provide technical support but also “to deal with the complex environment in which those are embedded.”