The school highlighted its contributions to the advancement of public health in elegant and celebratory ceremony.
October 25, 2022 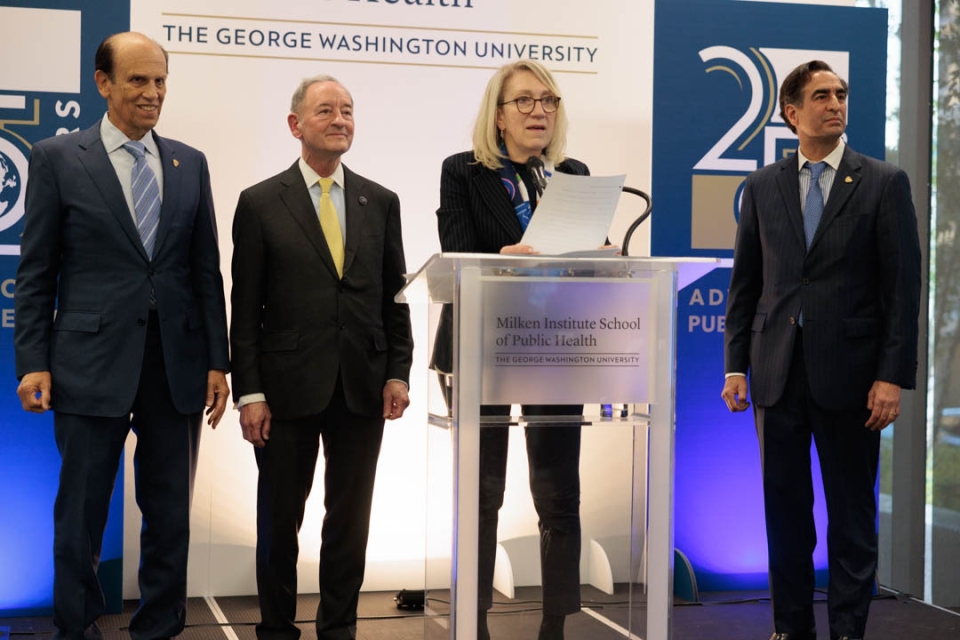 As he stood in the atrium and looked up at the celebratory crowd spread over six floors in the state-of-the-art building that bears the Milken Institute’s name, Michael Milken recognized and cheered a quarter century of the George Washington University providing significant societal contributions to public health research and education.

The Milken Institute School of Public Health commemorated its 25 years of excellence in public health education, research and practice on Thursday night with an elegant party that sprawled across and up every floor of the building. But as Milken told the crowd of celebrants, it’s not about the building but rather the people inside who make it so renowned.

“You not only made a home for the students, the professors and research, but in many ways, you've made this school a place that allows each of you to change the world for the better,” said Milken, who is chair of the Milken Institute.

Since opening its doors 25 years ago, the Milken Institute SPH has advanced public health with its innovation and ability to create new knowledge for the field, and to apply that knowledge to health policy and management. There are more than 14,000 alumni of the program using their education to fight disease and epidemics and advocate for social justice, health and wellbeing, identify and address social and environmental determinants of health, contribute to health policy making locally, nationally and globally and lead health systems and healthcare organizations.

The school has contributed to advances in the prevention of HIV AIDS and diabetes, prevention of antibiotic resistance, understanding the health impacts of microbiome, the discovery of promising public health interventions around obesity, nutrition and physical activity, smoking cessation, opiate addiction and other mental health issues, dementia and brain health and the health and impacts of climate change.

The enrollment has grown more than three times the size since 1997, currently checking in at nearly 3,000 students in more than 30 programs. Since 2007, research has grown 8-fold and the endowment has increased from $300,000 to $100 million today, Milken Institute SPH Dean Lynn Goldman said.

The only school of public health in Washington, D.C., the work done within those walls has had meaningful influence on shaping policy, practice and management. The school is one of the finest in the country, as proof with its No. 11 ranking in the U.S. News and World Report’s list of best public health graduate schools.

“Many things have changed in the first 25 years of our school, but what remains is an unwavering commitment to excellence in education, research and practice—a history personified in this beautiful crowd assembled tonight—you are all a symbol of our collective success and guides for our bright future,” Goldman said. “I believe that together we are going to bring about change in the health and wellbeing of our community or city or nation and the world.”

While it has only been around for a fraction of the university’s 200-plus years of operation, the Milken Institute SPH has helped to elevate GW’s reputation regionally, nationally and globally with its work, which was of course cause for celebration for the entire university community.

“In fulfilling the George Washington University’s mission of teaching, research, patient care and service, we endeavor to be distinguished and distinguishable,” President Mark S. Wrighton said. “The Milken Institute School of Public Health is a prime example of our aspirations in this regard. Every day, its faculty and students are creating new knowledge and translating research to practice or policy in service of improving the health of all individuals.”

Over the past 25 years, the Milken Institute SPH has conducted groundbreaking research that has changed clinical practice, advanced basic knowledge and led to a change in public policies that have helped prevent diseases and saved countless lives.

For example, Milken Institute SPH researchers published the first comprehensive report on the number of excess deaths in Puerto Rico due to Hurricane Maria. The researchers also made recommendations that are helping coastal communities around the world prepare for hurricanes and the extreme weather of climate change. The methodology that they developed for assessment of total mortality after disasters has been widely used including for assessing total deaths due to COVID.

The GW Biostatistics Center, now based at Milken Institute SPH, has over the years conducted and coordinated studies that have led to widespread improvements in the prevention, treatment and outcomes for people with diabetes. The large and well-designed trials that informed the prevention of the worst outcomes of diabetes, via strict glycemic control, are a model for the conduction of rigorous intervention studies.

And the Milken Institute SPH-led DC Centers for AIDS Research (CFAR) helped galvanize the response to the HIV epidemic in the nation’s capital, leading to a dramatic 79% reduction in newly diagnosed HIV cases from 2007 to 2019 and continued reductions thereafter. This approach to HIV prevention, which involves a multi-tiered effort to identify, treat and assure follow-up for all who are HIV positive, to the extent possible, is now employed by the entire National Institute of Allergy and Infectious Diseases CFAR network. with leadership of the DC CFAR.

The smorgasbord of public health nuggets of wisdom was served up on different atrium floors throughout the building as GW expertise was on display whether people looked up, down or to their sides.

“What makes our school like none other is a world class faculty, our game changing research and our immersive learning environment,” Goldman said. “There's no better place for time to study public health, and there is no school that is more innovative.”

Thursday’s celebration for the Milken Institute SPH, by the numbers, was 25 years, seven floors and limitless future potential to continue advancing public health for the greater good.

“Every one of us ...has that opportunity to touch the future of society and public health,” Moritsugu said. “We dignify the lives of those we serve.”