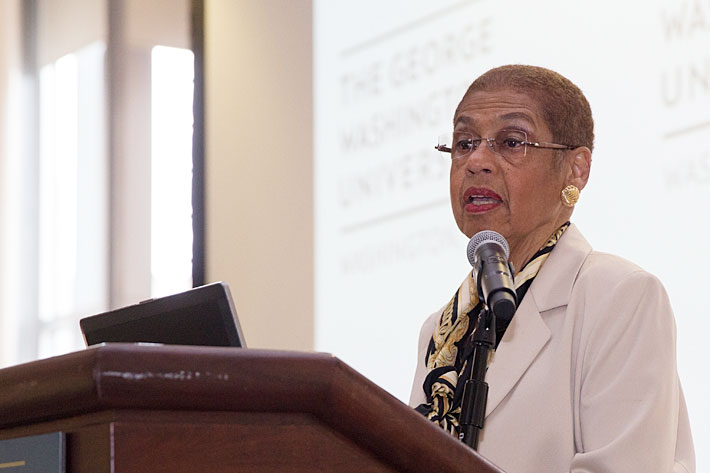 Students, activists and university administrators from the Washington, D.C., area gathered Thursday night to discuss the complexities and possible ways forward on the issue of campus sexual assault.

U.S. Del. Eleanor Holmes Norton (D-D.C.) led the discussion, which she said she hoped would be candid and productive.

“We are anxious to hear from anyone in the audience who wants to help us get to the bottom of a complex problem–one that can’t be solved by Congress or university leaders or student governments alone,” Del. Norton said.

“We are searching for realistic remedies,” she said.

Mr. Muhammad said he believes in a “systemic approach” to combating sexual violence and stressed the importance of clarity to both administrators and students. He said one of his most important roles was as a distributor of information across disparate offices and departments.

Del. Norton asked Mr. Muhammad and American University Sexual Assault Prevention Coordinator Daniel Rappaport about whether, as men, they were appropriate choices for their jobs. Would women, faced with the trauma of a sexual assault, feel as comfortable coming to a man as they would to a woman?

Mr. Muhammad said that he hoped they would, and he recognized that some would and some would not. For any student who preferred not to come to him based on their affinity group—specifically women, LGBT students and students of color—“part of [his] job” is to direct that student to resources with whom they would feel comfortable, he said.

Many of the witnesses who engaged the panel brought personal insight to the issue, including Kirsten Dimovitz, co-president of GW Students Against Sexual Assault.

The problem of campus sexual assault will remain unsolved without comprehensive education, said Ms. Dimovitz. She added that education should go beyond university campuses. Secondary schools, she said, should be emphasizing consent, communication and respect.

“People arrive at college not even knowing what a healthy relationship should look like,” she said.

Witness Sherelle Hessell-Gordon, executive director of the DC Rape Crisis Center and a 20-year veteran of combating sexual violence, said she faces many of the same issues today that she faced decades ago. Without an understanding of the nature of consent and the importance of communication around sex, Ms. Hessell-Gordon said, the culture surrounding sexual violence would not change.

“We need to create a culture of literacy around consent,” she said.

The hearing grew more emotional as Del. Norton grilled the panel, being “deliberately provocative,” she said, about whether survivors of non-stranger rape had a degree of responsibility in preventing their assaults.

Witnesses countered that the complexity of the issue meant that some survivors felt they were unable to say “No.”

“Sexual assault is about power and control,” said Ms. Hessell-Gordon. “We need to stop thinking of the assault as the act itself—that’s not the violation. The violation is when the attacker takes away someone’s ability to consent.”