Three GW residence halls will get about two-thirds of their hot water from the sun's heat this year, thanks to new solar thermal systems.

The systems, which collectively are the sixth largest system in the country, according to the U.S. Department of Energy, were installed this spring and summer in Building JJ, Ivory Tower and 1959 E Street.

“With the completion of this project, GW will have the largest installation producing solar thermal energy on the East Coast,” said President Steven Knapp. “By using our campus as a test-bed for renewable energy technologies, we are demonstrating our university’s commitment to becoming a model of urban sustainability.”

Rooftop collector solar tubes and panels absorb sunlight and turn it into heat energy. This clean, efficient energy is then able to heat municipal water. In the summer when the heat from the sun is the strongest, the systems are able to heat the water to the appropriate level – about 120 degrees – allowing the traditional water heater to remain off. In the winter, the solar thermal systems need to rely more on the natural gas water heater. 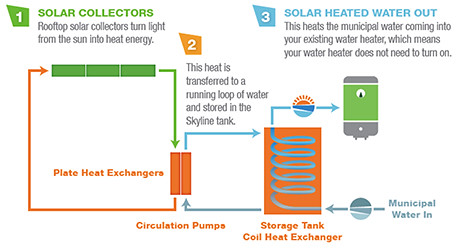 “A solar thermal system allows the water heater to work less often and sometimes not at all, which cuts down on the amount of natural gas that is burned to heat water and thus the amount of carbon dioxide that is produced,” said Kate Heidinger, project manager for Skyline Innovations, the local solar energy company that installed the systems at GW. Skyline covered the installation costs.

Reducing the campuses’ carbon footprint is part of GW’s Climate Action Plan, which targets carbon neutrality by 2040. By making buildings more efficient, using cleaner energy and encouraging the GW community to do its part, the university plans to reduce its carbon emissions by 40 percent by 2025 and 80 percent by 2040. The remaining carbon emissions will be mitigated through the purchase of local offsets, such as planting trees.

The solar thermal systems will reduce about 78 tons of carbon annually, which is the equivalent of removing 14 cars from the road permanently or planting more than 70 trees every year, said Ms. Heidinger.

“Over the course of the year, the systems should provide about 60 to 70 percent of the hot water needs for all three building,” she said.

For the next 10 years, GW will pay Skyline for however much energy is produced from the three systems, but Skyline will offer GW a 40 percent discount from typical energy prices. After 10 years, GW will own the three systems and no longer be required to pay Skyline for the energy produced by the systems. At that point, the systems should last another 20 years, said Ms. Heidinger.

“GW is committed to using its campus as a test bed for low-carbon technologies,” said Meghan Chapple-Brown, director of GW’s Office of Sustainability. “We are thrilled to announce the completion of our first on-campus renewable project and look forward to more projects in the future.”