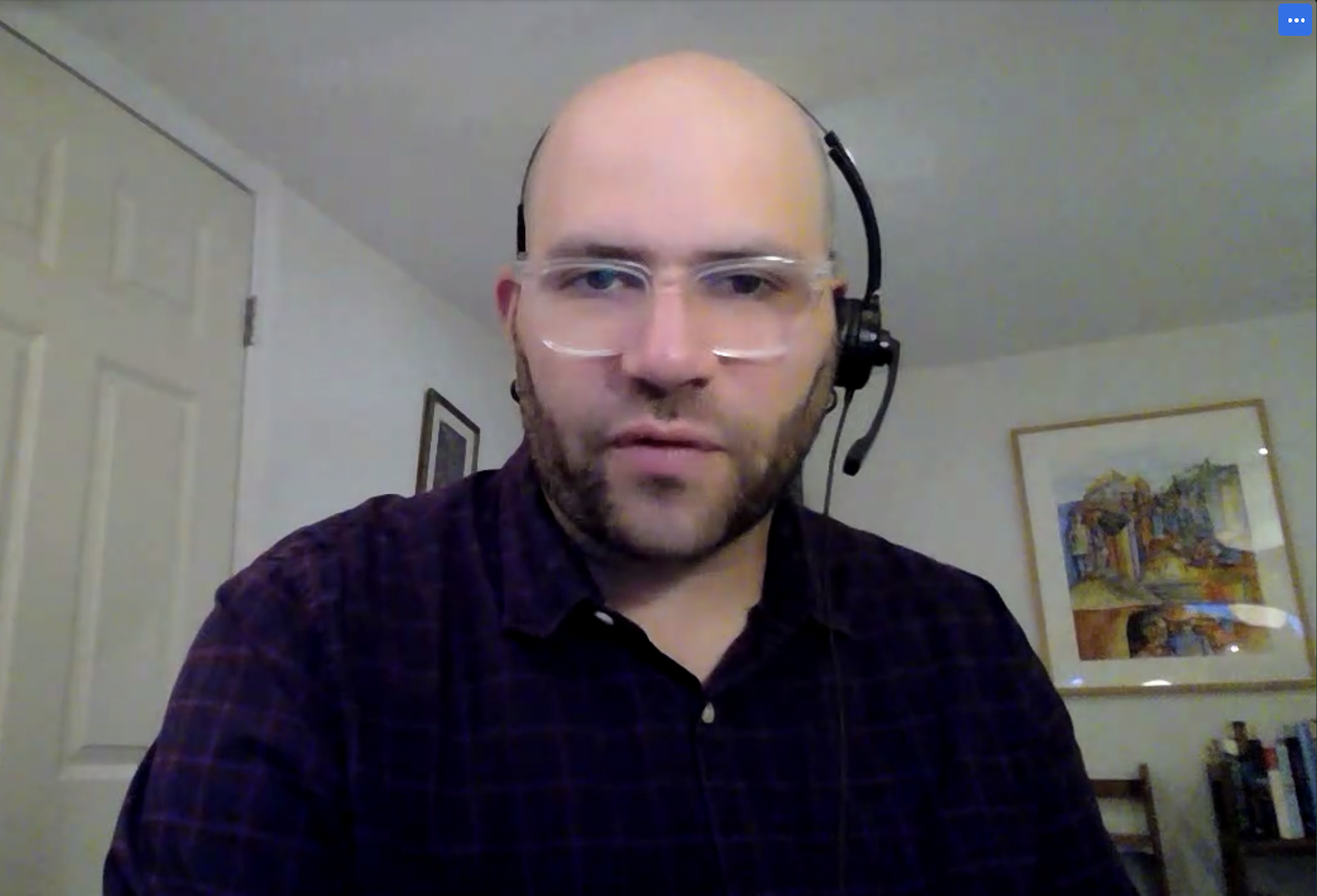 Jonathan Friedman, of PEN America, was one of the presenters at a workshop on academic freedom.

Three views of academic freedom were presented by a trio of speakers in the latest Useful Knowledge Workshop hosted virtually by George Washington University’s Graduate School of Education and Human Development. Dwayne Kwaysee Wright, GSEHD’s director of Diversity, Equity and Inclusion Initiatives and assistant professor of higher education administration, presented one of the three hourlong sessions and also moderated for the event as a whole.

“Think of today’s workshop as a buffet of ideas,” Wright said. “We want to expose you to different views.”

The first session, dubbed Academic Freedom 101, was presented by Jonathan Friedman, director of free expression and education programs at PEN America, a nonprofit devoted to the defense of free expression. With so much energy being spent to portray today’s campuses as intolerant of diverse views, Friedman offered a much more nuanced view of where we are and how we got here, as well as tips for encouraging open and respectful exchange on campus. His comments were informed by PEN America’s Campus Free Speech Guide.

Some of the key ideas Friedman presented were that free speech and the principles of diversity, equity and inclusion (DEI) can be compatible values; that in an open and equitable society, knowledge institutions—schools, universities, bookstores, libraries—have unique obligations to these dual values; and that free speech is under threat in many locations worldwide, with people being imprisoned or even killed for their speech.

All societies, Friedman said, make decisions about how ideas can be expressed. The question is, where do we want to draw the line between total free expression on one side of the spectrum, and total regulation of speech on the other?

“The United States is somewhere in the middle” of that spectrum, Friedman suggested. He briefly traced the role of various progressive movements (such as those pushing for birth control, sexual liberation, greater secularism, women’s rights and workers’ rights) in the history of free speech gains in the United States. In 1860, Frederick Douglass gave a speech calling for freedom of speech as a bulwark against slavery.

Today, Friedman said, “A lot of people are pushing in different directions when it comes to freedom of expression.” From the left, there are calls to regulate hate speech or “cancel” use of language that some find harmful; on the right, there is concern about critical race theory, LGBTQ+ issues and actions deemed by some to be unpatriotic, such as kneeling during the national anthem.

As interpreted by the judiciary, Friedman added, some restrictions on speech are acceptable as long as they are neutrally and consistently enforced. On a college campus, it’s reasonable to insist that people not walk around shouting through bullhorns at night, so long as there’s no explicitly political excuse for the restriction.

“Around the world, the United States has the highest allowance for politically offensive speech,” Friedman said, “and for speech that really comes as far up to, and probably over, the line of decency that most people think of when they think of a civil, respectful society.”

Since early in the previous century, there has been an effort to protect the freedom of professors to research and publish; to teach; to express internal criticism without losing their job; and to participate in public debate. Universities have usually been permitted to regulate these matters internally.

“A lot of what’s happening right now is deeply anti-intellectual,” Friedman said. “A lot of the people who are showing up at school board meetings and putting pressure to remove books don’t seem to be very interested in compromise.” In open, equitable, democratic societies, he added, “We ought to be able to have open and equitable conversation.”

Nonetheless, Friedman said, a degree of friction on campus is a positive good. “Respect,” he added, “entails an obligation to understand what may cause offense and why, to avoid words and actions that do so, even when there’s no intention to do so.”

In the second hourlong session, Wright presented a critical race perspective. The central question he posed is: Whom does the First Amendment protect under our current jurisprudence, and who is left behind?

“In a society as big as ours, as diverse as ours, where people have diverse views, we need freedom of speech,” he said. “In a democracy, if we’re not allowed to speak, we might as well not be allowed to vote.”

After a brief explanation of critical race theory (CRT) as less a single theory than a way of looking at things as a whole, Wright proposed a hypothetical counter-story set in an imaginary state where both CRT and affirmative action have been banned. Wright’s scenario illustrated his claim that a ban on CRT or on affirmative action is not neutral, despite the fact that enhancing neutrality is given as a rationale for such bans.

“As a lawyer, I truly do believe in free speech,” Wright said. “I believe that the way to combat speech you don’t like is with more speech.”

Academic freedom is a special type of freedom of speech, Wright said, enforced more by contract and custom than by the courts. It refers to the ability of teachers, students, and educational institutions to pursue knowledge without “unreasonable” political or government interference.

“If you want a marketplace of ideas,” he concluded, “maybe you should not restrict the marketplace.”

In the final session, a libertarian perspective was offered by Adam Kissel, visiting fellow on higher education reform at the Heritage Foundation, a conservative think tank.

People are drawn to the university environment, Kissel said, because they want to take part in a communal search for truth. Privileging another value, such as social justice, over the truth is like being at a religious institution, which chooses its own truth as a starting point.

The university, he said, can be conceptualized as “nested spheres of academic freedom.” Trustees and university leadership may require faculty members to behave in a certain way; similarly, deans and department heads may impose additional requirements. Each academic discipline imposes its own restraints; in Kissel’s example, a history professor isn’t permitted to teach a chemistry class.

These nested spheres continue downward to the classroom, where a professor exercises considerable freedom within given constraints. Students also have freedom. The best government, in liberal theory, permits maximum freedom for the individual.

“You get to say what you want, and what you say is protected, just like any other person,” Kissel said. “The point is to be able to argue together and think together. We need one another to challenge our ideas and see mistakes in our own reasonings so that we can try to do better. Reasons and reasonings are what matters.” Even when an opponent is entirely wrong, he added, it can help us sharpen our arguments.

The workshop concluded with a question-and-answer session hosted by Wright and Christy Anthony, GW’s director of student rights and responsibility. What, Wright asked her, should students know about academic freedom?

“If I had the ear of every student, I would want to share a couple of things,” Anthony said. “GW’s statement on student rights and responsibilities explicitly states that academic freedom is not only freedom to teach and research, but also freedom to learn; and it is viewed as a requirement for a full exploration of ideas, sometimes even offensive ideas.”

As with any form of speech, she added, there are limits. Freedom of speech “is not a limitless right, neither for faculty nor for students, but it is a preeminent value of the institution. Fully exploring ideas, and controversial ones, is essential for learning.” 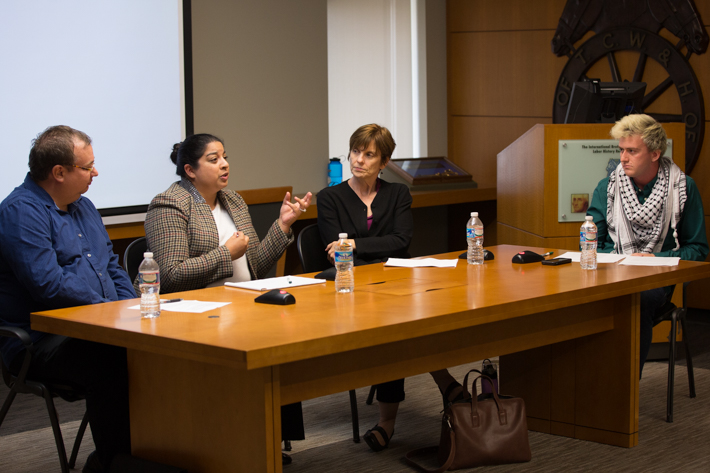 Is it Uncivil Speech or Academic Freedom?