Bob Corker recognized for his leadership by GW’s Institute for Public Diplomacy and Global Communication.
May 8, 2018 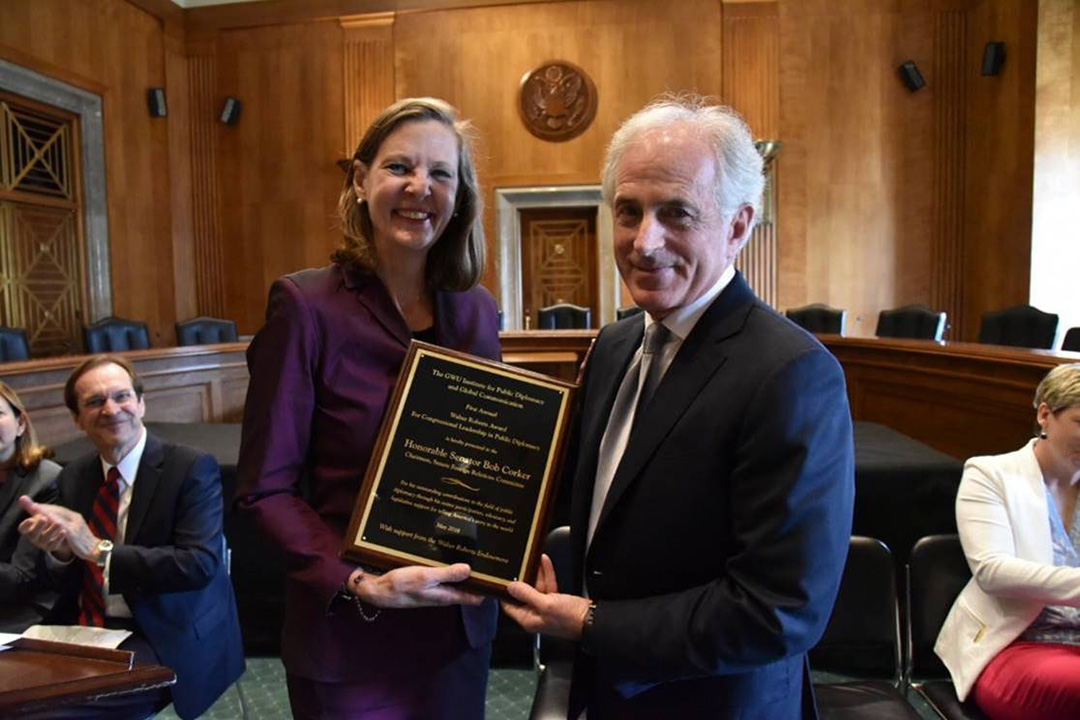 “Through my role as chairman of the Senate Foreign Relations Committee, I have had the opportunity to travel across the globe and see the positive impact that our nation has on the world,” Mr. Corker said at a ceremony in the Dirksen Senate Office Building.

“No matter the challenges we may face here at home, I am always reminded that we live in the greatest country on Earth, and that millions around the world strive to emulate us,” he said. “Telling that story and serving in this capacity has been an incredible privilege, and I thank George Washington University for this honor and for promoting public diplomacy that advances American interests abroad.”

Janet Steele, director of GW’s Institute for Public Diplomacy and Global Communication (IPDGC), said the award was created for congressional leadership in public diplomacy to shed light on something that is invisible to many Americans.

“They may know of the Fulbright program or be aware of Voice of America, but it’s been my experience that the majority of Americans have no idea what public diplomacy even is, let alone how the programs that are carried out in their name provide direct benefits to the United States,” Dr. Steele said.

“As chairman of the Senate Foreign Relations Committee, Sen. Corker has been a consistent supporter of U.S. public diplomacy, recognizing the impact that U.S. leadership and diplomacy abroad can have on our own economy and national security,” she said.

Mr. Corker is in his second term in the Senate. He is also a member of the Banking Committee and the Budget Committee. He was Tennessee’s commissioner of finance and mayor of Chattanooga before being elected to the Senate in 2006. He had spent most of his adult life in business.

He has visited more than 70 countries since taking office to gain a deeper understanding of the strategic relationships between the U.S. and other nations.

Once elected chairman in 2015, Mr. Corker quickly worked to build the committee’s emerging reputation for developing bipartisan consensus on major issues and reasserting the committee’s traditional role in foreign policy.

Assistant Secretary of State for Educational and Cultural Affairs Marie Royce, Broadcasting Board of Governors CEO John Lansing and University of Tennessee Center for Sport, Peace and Security Director Sarah Hillyer also spoke at the event about the importance of American public diplomacy.