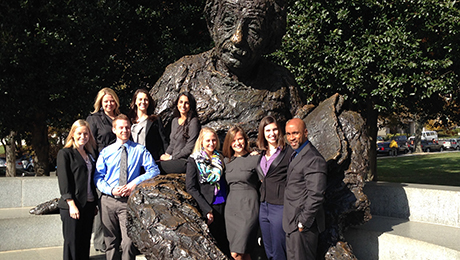 They started off as strangers, but after two weeks of sleepless nights, six graduate students from three George Washington University schools were able to develop a feasible and creative proposal to address a real-world public health problem in Washington, D.C.

“At any university, students are often put into academic silos, and you stay in your own little bubble,” said GSEHD student Brian Ernest. “This was really one of the first opportunities I had to work in a collaborative way with other people from other schools, and I know that I’m smarter for it.”

The competition, modeled on Emory University’s Global Health Case Competition, challenged teams from seven universities to prepare a proposal in just 14 days that would outline interventions addressing violence affecting LGBT youth in the local D.C. community. Proposals were limited to a $200,000 budget. The hypothetical case, written by a team at Georgetown University, identified examples of violence against this demographic as well as its causes, such as bullying, parental rejection and homelessness.

The proposals were presented in front of a diverse panel of six judges, which included New Yorker Magazine writer Margaret Talbot and Saul Levin, the CEO and medical director-designate of the American Psychiatric Association.

The GW team opened their presentation by introducing “Sam,” a homeless, gay teenager who is not using the many resources that are accessible to her in the D.C. area. The problem, the team said, is not a lack of resources within the city, but rather that many of those resources address “higher level” needs, like self-esteem. Teenagers like “Sam,” they said, have much more basic needs, like safety and hunger.

Gangs, the team explained, are the “most effective in targeting disenfranchised youth” and reaching a teenager’s lower level needs. So, the team’s intervention strategy for preventing violence against LGBT young people, was to take the idea of a gang and “flip it on its head” using “positive peer pressure.”

The students proposed a three-phase movement called “Toward an Engaged Adolescent Movement” (TEAM), which involves the schools as an “incubator,” the community as a “catalyst” and policymakers as “power.” The team fleshed out a plan that would include recruiting high school students to be positive allies and role models for struggling LGBT teens, involving various community stakeholders and lobbying to strengthen civic engagement of LGBT youth.

“We didn’t just want to develop another program initiative, because that’s not D.C.’s problem,” said GSEHD student Kate Berry. “That’s why we wanted to embed the interventions within already existing organizations.”

The team vetted tough questions from the judges about how they planned to implement their plan as well as what evidence they had their strategy would be effective.

After “playing devil’s advocate with each other” for two weeks, the team members were well-equipped to answer any question thrown their way, said SPHHS student Hira Chowdhary.

“It was difficult because you kind of had to sit and endure everyone’s thought process and how it differed from yours to try and find that intersection between each person’s area of expertise,” Ms. Chowdhary said.

But the team members agreed that tackling the problem with a truly interdisciplinary approach was what made their proposal so rich.

“The final product has each component so seamlessly interwoven within it, you don’t even know what place it came from,” Ms. Chowdary said.

And while there were so many different components, each student still “truly felt ownership of the presentation,” said SMHS student Elizabeth Prevou.

Dr. Vigilance said the team’s “Best Interdisciplinary Approach” award is notable because it “exemplifies what we seek to do here every day at GW: innovation through cross-disciplinary collaboration” and the students as well as the advisers were honored “to put that value to work.”

The entire project required the team members to be “thoughtful, gutsy and innovative,” he added.

Not only have the team members made new lifelong friends and potential research partners, but they also are looking for ways to implement their proposal.