Master of Science in sports management students share their takeaways and memories of volunteering at the iconic tournament.
December 19, 2022 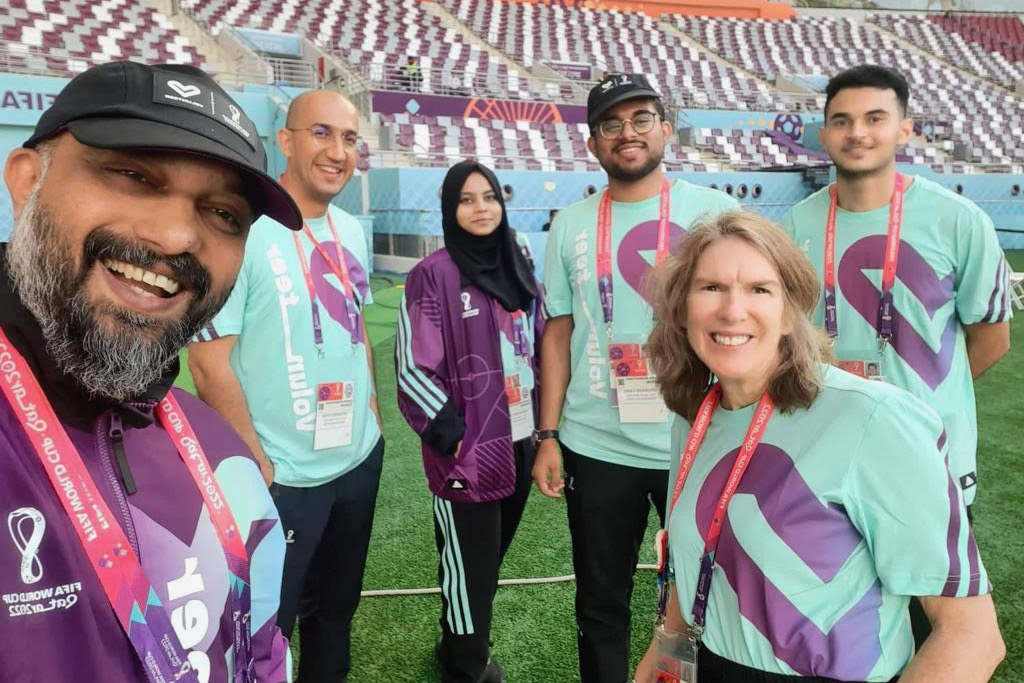 Sixteen George Washington University students in the Master of Science in sports management program traveled to Qatar with Program Director and GW School of Business Associate Professor Lisa Delpy Neirotti for an experience of a lifetime volunteering at the men’s soccer World Cup. The students, many of whom were enrolled in the Management of Global Football course that was offered fall semester, used Neirotti’s guidance and connections to apply to be volunteers at the iconic tournament that ended Sunday with Argentina defeating France in an epic final. It was Neirotti’s sixth World Cup attended as a consultant, volunteer or researcher.

Five of the students shared with GW Today their biggest takeaways of experiencing the world’s game on the biggest stage up close and in person.

“Being able to go to the Qatar World Cup as a volunteer and a fan is definitely one of the most memorable experiences in my life. In every corner of Doha where I went, I could feel that soccer culture is no longer an illusory concept, it was happening around me all the time. And when I came to work at the Khalifa International Stadium in uniform, it brought me not only the experience of providing services to the spectators but also the opportunity to take a closer look at and understand the management structure and model of the World Cup, as well as how the various functional positions work to make every single match happen. Only the participation of every character involved can perfectly present the most realistic reality show in the world—SPORTS!”

“You get to see people from around the world coming together in one place. Everyone wears their flag every day and sings their country's chants. Not to mention Argentina has like 50 different songs. Everyone is smiling, and while you might not be rooting for the same team as the person next to you, the excitement, love and passion one has for football unites us all. I won't discard the ethical concerns surrounding the building of the stadiums and hosting the World Cup in Qatar, however, when you get to Doha, you see the other side of the coin. From a western perspective, you only know what you read on the news, but when you are there, you see the beauty of a united world. At night Doha became the city of lights, showing off all its beautiful skyscrapers and giving off its vibrant energy, becoming one with the fan. The Souq Market was the place to go. There, people sang and danced, and it was an atmosphere where 32 countries united into one. That's power. The stadiums were radiant, and the people were friendly and happy to be the host of this magnificent event.”

“I thoroughly enjoyed my time in Qatar, and the best part about the whole experience was getting to bond with people over the beautiful game. Talking to volunteers, fans and people in Qatar was one of the best and most rewarding aspects of the trip, because I was able to learn so much from different individuals who come from around the world. I was able to meet such a wide array of people, and it was so interesting to learn new perspectives and encounter different cultures and ways of life. When it comes to the tournament itself, I believe it was a major success. Many people on social media were saying that this World Cup would be a massive failure and that it would end up being the worst of all time. This couldn’t be further from the truth. This tournament has been one of the best I’ve seen in my lifetime and has had non-stop excitement and unbelievable matches. Every single game has been interesting and entertaining. Also, Qatar delivered on their part to make this an extremely safe tournament as well as one that brought people together. Additionally, I think this is a tournament people will be able to look back on and say it really exceeded expectations and was genuinely fun to watch.”

“After spending 10 days in Qatar during the 2022 FIFA World Cup, I gained a unique perspective on one of the largest and highest profile events in the world. What I will remember the most is the incredible atmosphere in each stadium I visited with thousands of supporters cheering and singing constantly throughout each game and creating an emotional, overwhelming feeling of excitement and passion that only sports can create, especially soccer when supporters travel from all over the world to support their country on the biggest stage in the world. I will remember walking from the metro to the stadium before a game surrounded by supporters from different countries singing in the metro station and singing all the way to the gates, creating a global community, even for a moment, that I have never experienced before. As a volunteer, I was fortunate to have quality conversations with people from many different countries, including Oman, India, Sudan, Saudi Arabia, Iran, Qatar and more, and we bonded talking about soccer, basketball, school, careers and our personal stories. I was very fortunate to sit in on the postgame press conference with coaches and players after the Croatia vs. Canada game, which I will never forget.”

“Participating in the FIFA World Cup as a volunteer and spectator was an experience of a lifetime for me. The World Cup has been an indispensable part of my childhood sports memories. I can still clearly recall getting up in the middle of the night to watch Germany 2006 in second grade. But this time, I was able to cheer with fans from all over the world because Qatar is a small country, and during the group stage, you can actually run into supporters from 32 different nations! Fans from all nations and cultures got along so well, even though some people referred to them as rivalries, which was also fascinating. It gives me hope that football/soccer can bring people together from various backgrounds.”

Below are more photos from the students' experiences: 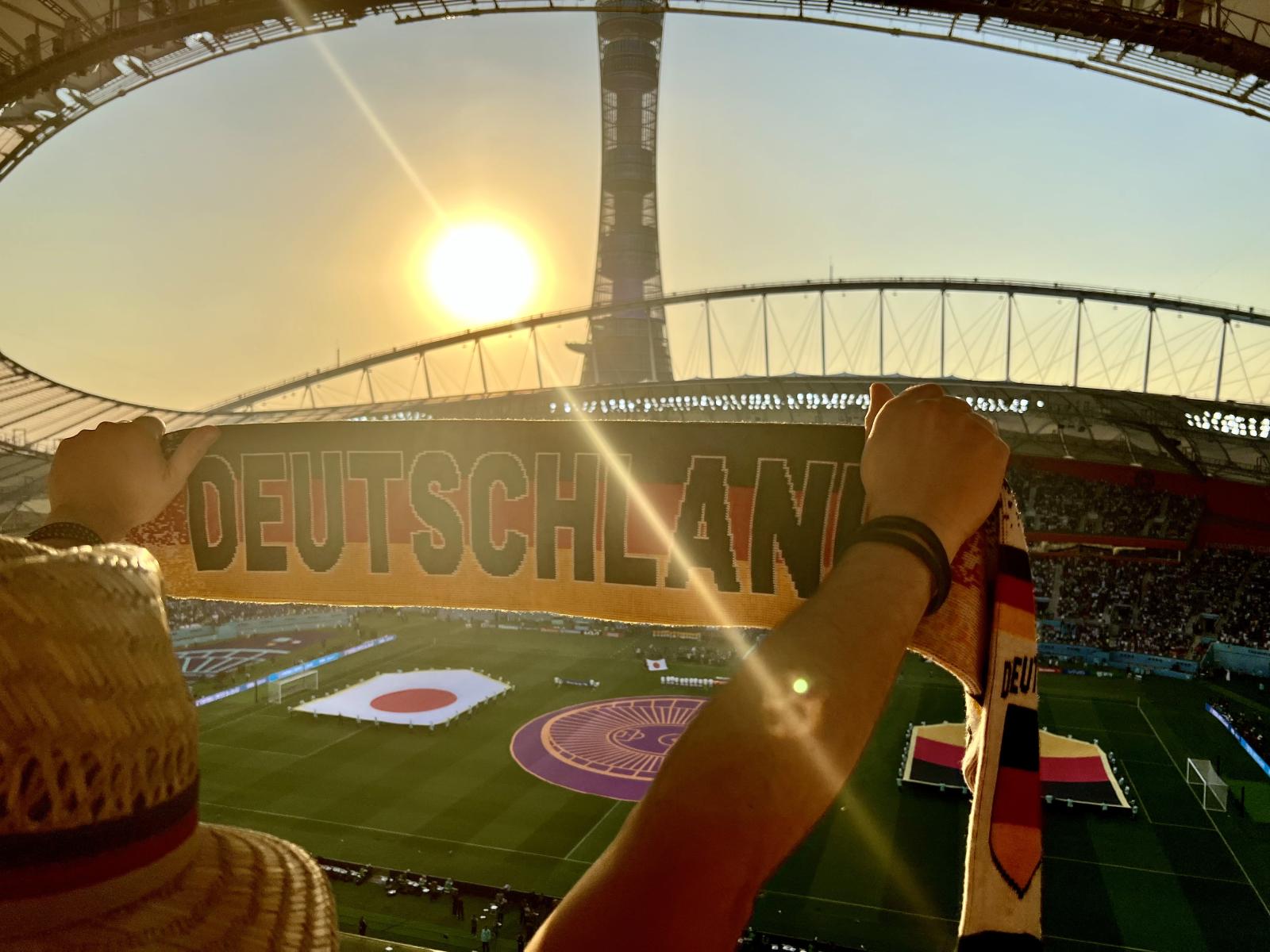 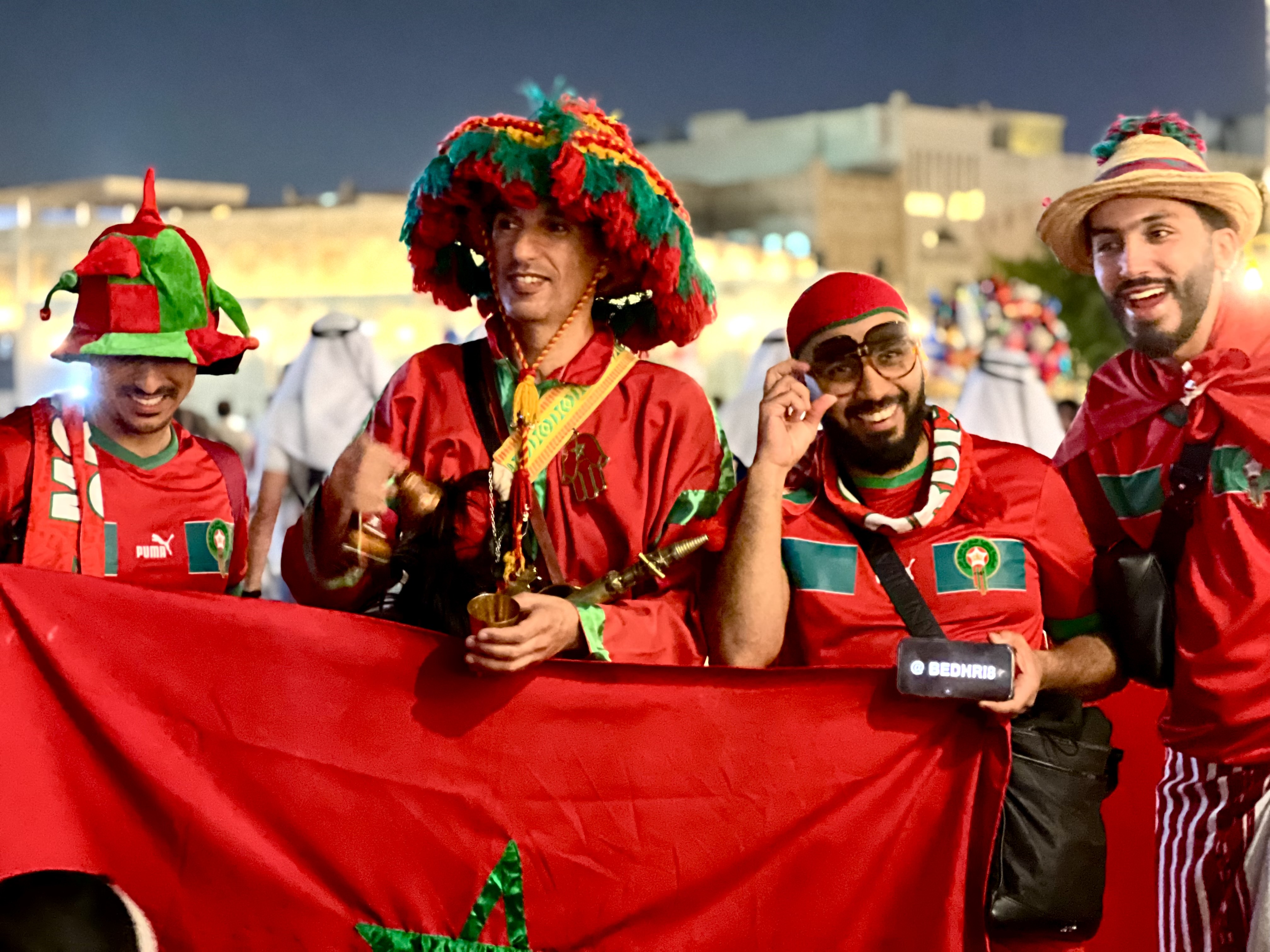 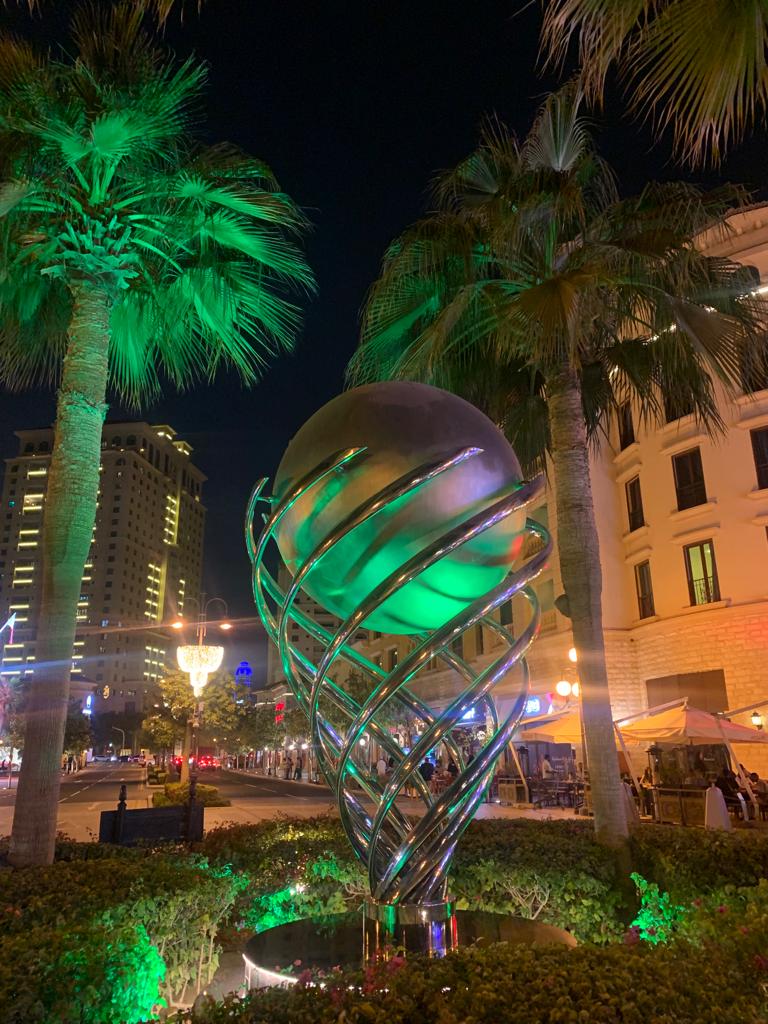 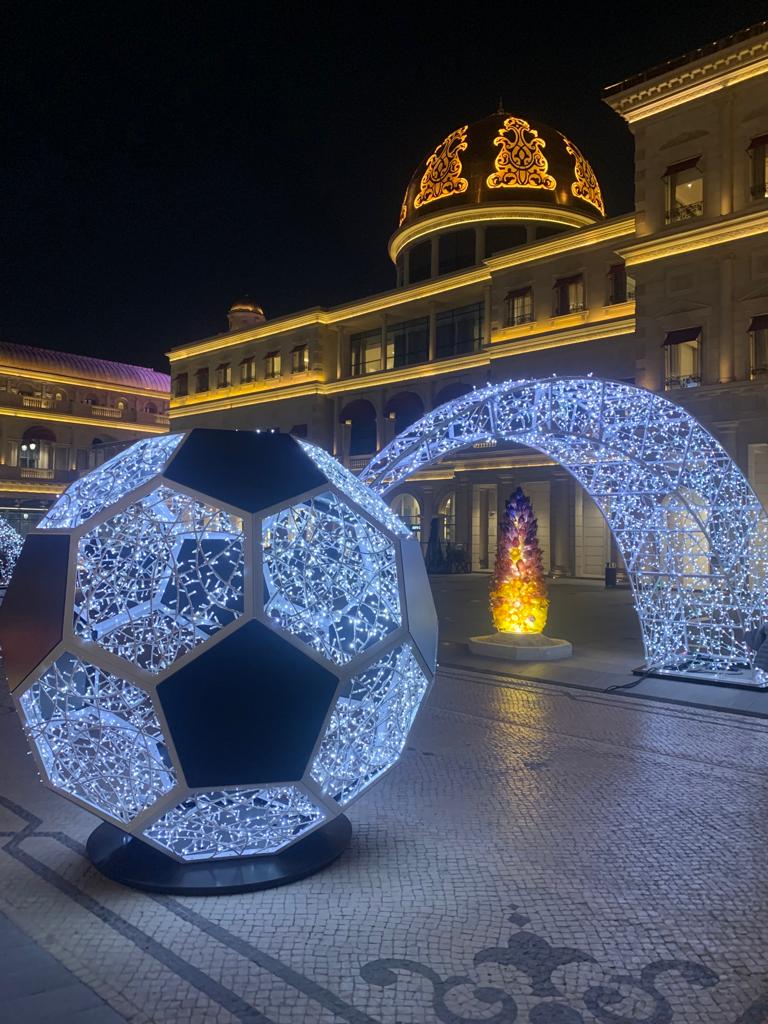 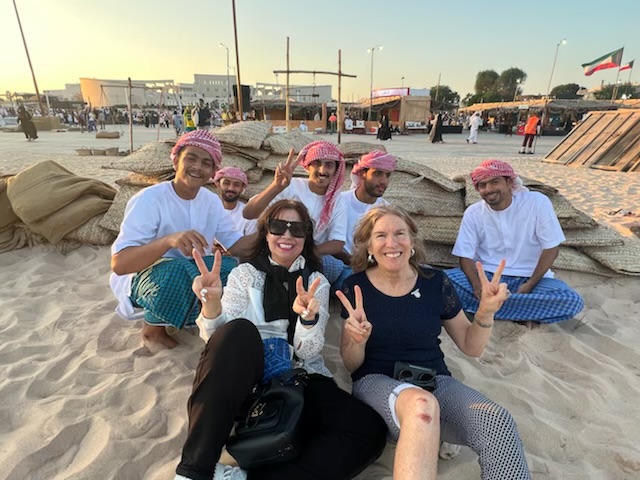 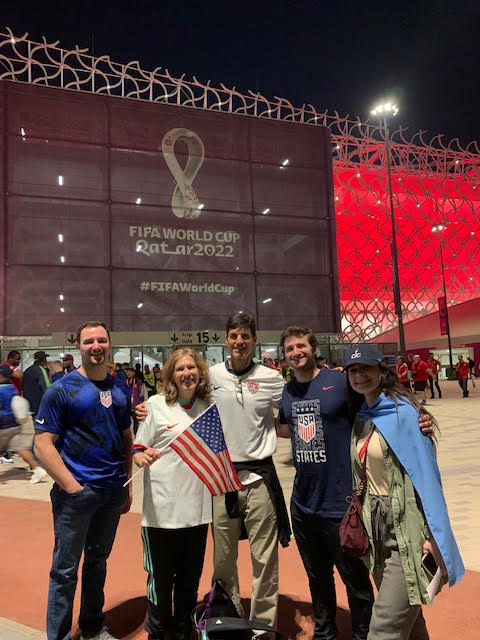 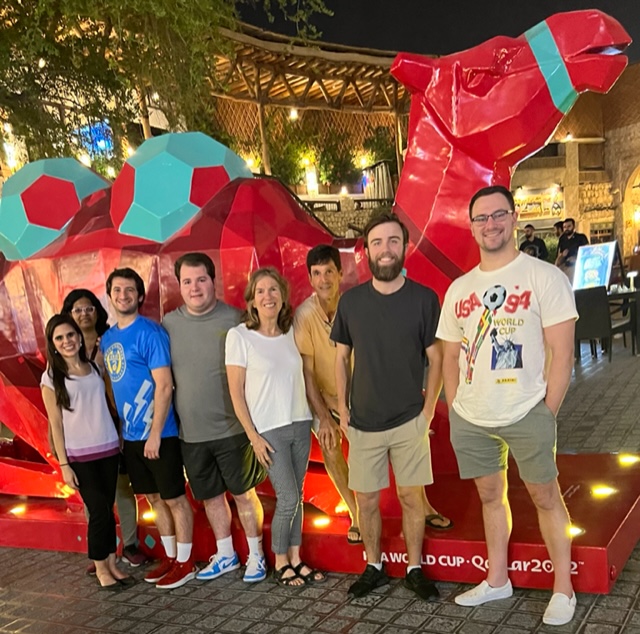 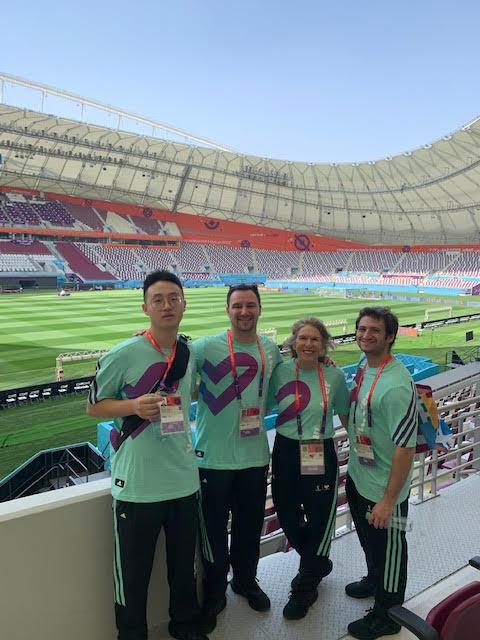 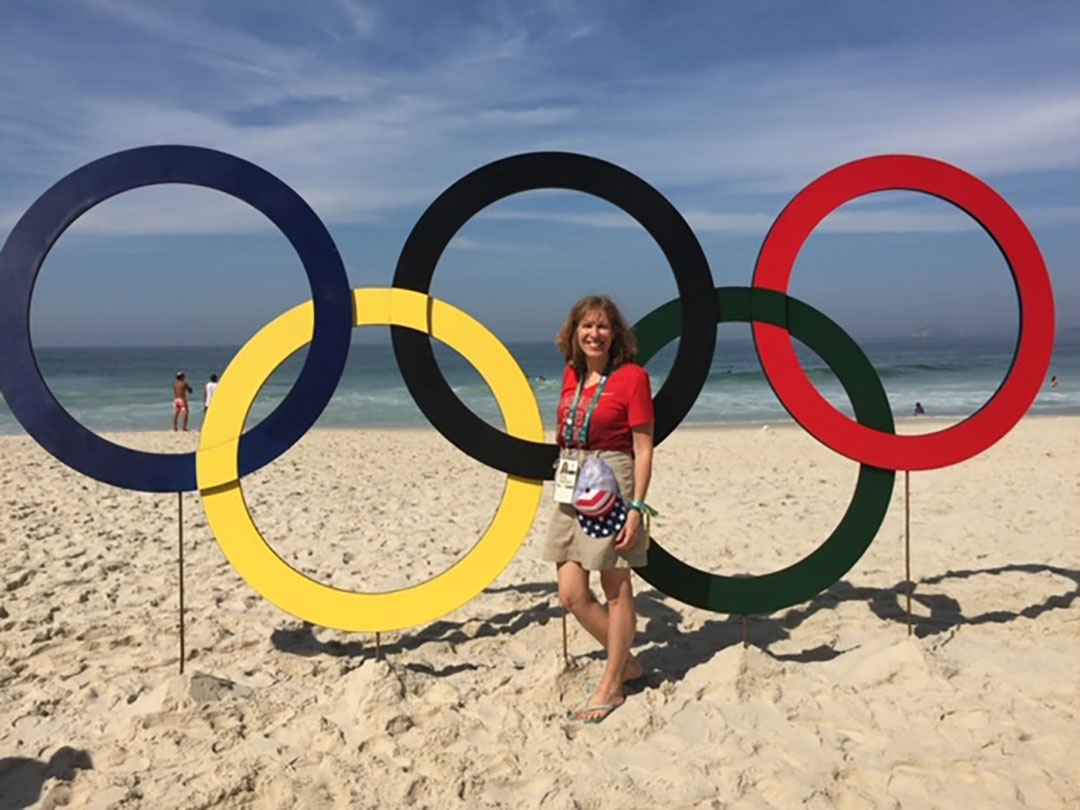 Q & A: The Tokyo Olympic Games 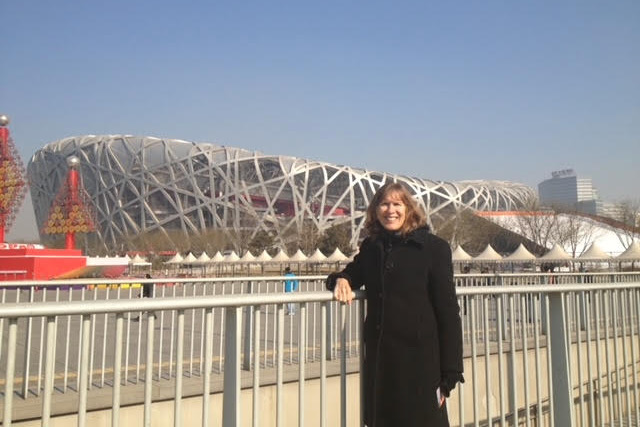 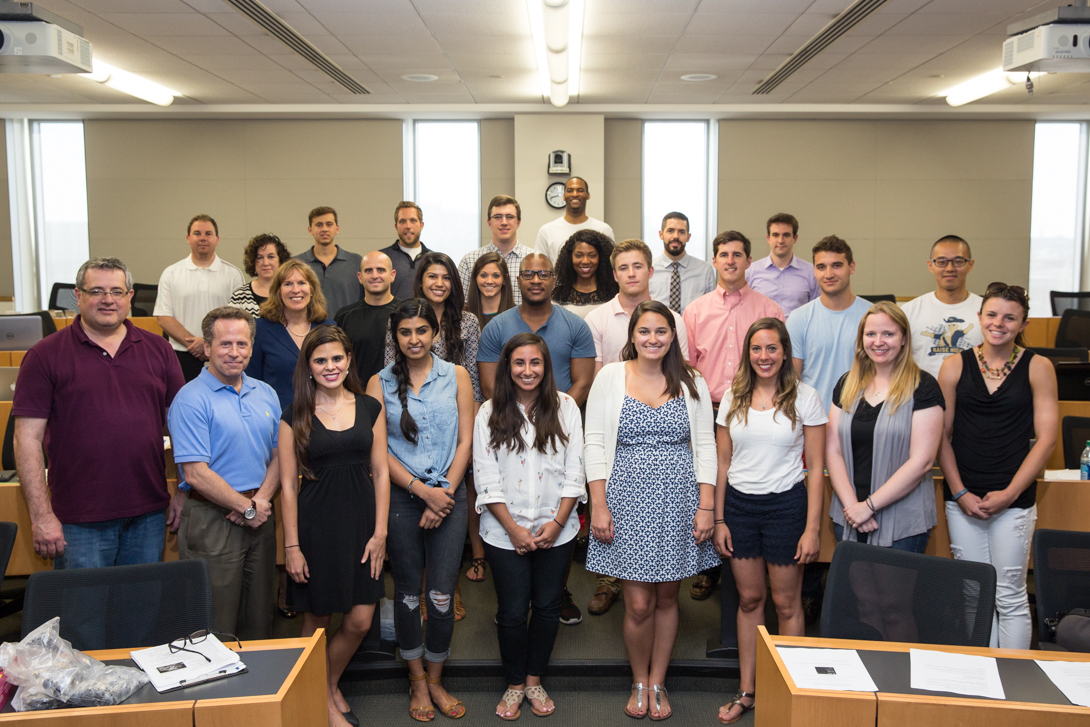