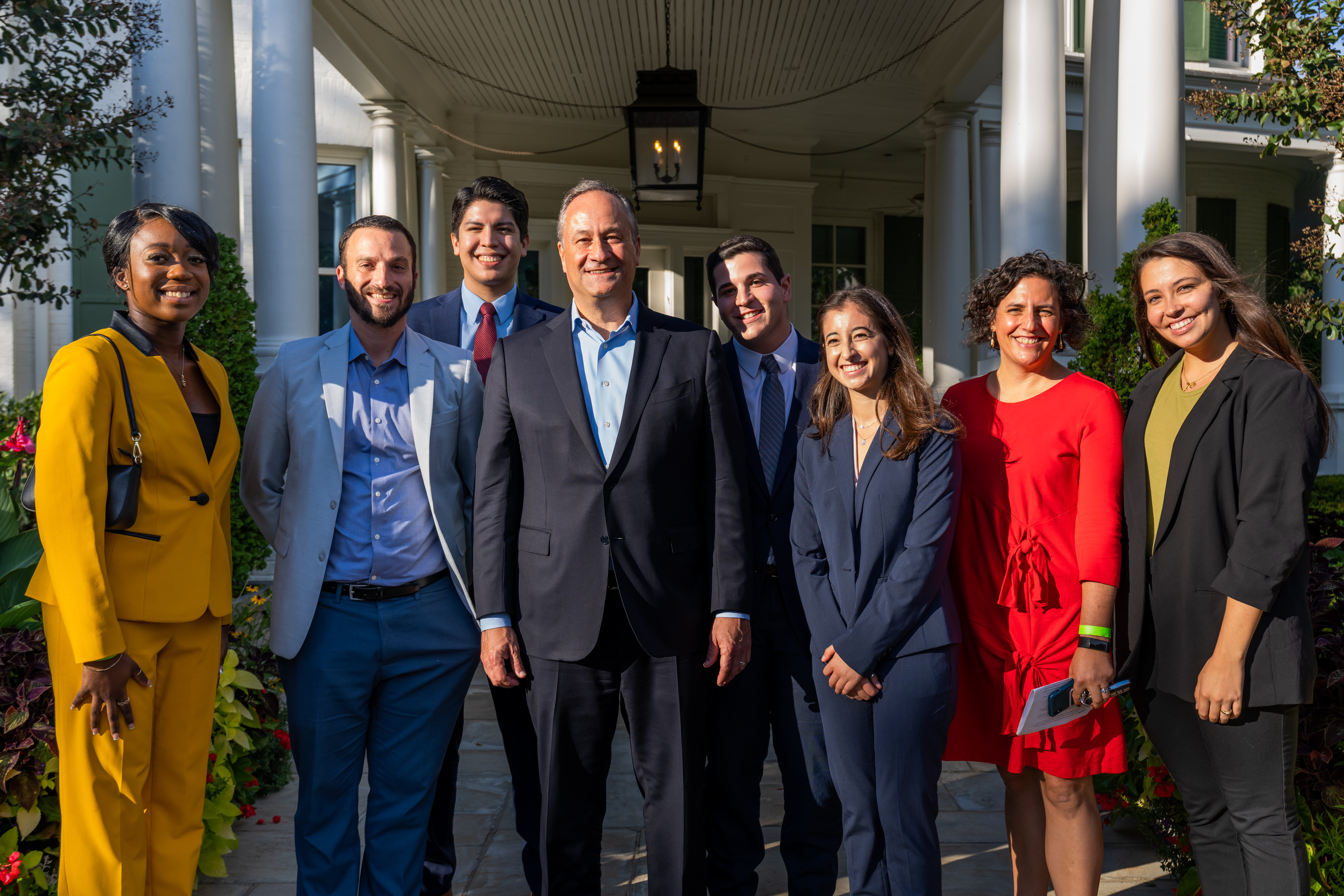 Second gentleman Douglas Emhoff, the spouse of Vice President Kamala Harris, asked GW Hillel to put together an interfaith celebration for Rosh Hashanah, the Jewish New Year. The group did, and five George Washington University students joined 10 others from D.C. area colleges at the vice president’s residence at the Naval Observatory for the interfaith celebration last Thursday.

GW Today asked the GW students—Juan Carlos Mora, Gianna Cook, Hailey Waldman, Natalie Chervel and Harrison Braver—to share in their own words what the experience on Thursday was like.

“It is not every day that you step into the Naval Observatory, let alone meet second gentlemen Douglas Emhoff. And yet, what I took away from our interfaith celebration of Rosh Hashanah was not just a conversation or object; it was a feeling. Despite being a Latino Catholic, I think I will always remember how distinctly warm and welcomed I felt when I sat down in a circle that included rabbis, student government leaders, Jewish student leaders and student leaders of other faiths. I learned that Rosh Hashanah, in addition to marking the Jewish new year, is an opportunity to look inward and ask for forgiveness. As Rabbi Dan Epstein [from GW Hilllel] noted in our conversation, this ethos is not found only in the Jewish faith. It's a universal principle: love thy neighbor as thyself. Or as I embarrassingly shared with the group, the second formulation of Kant’s categorical imperative. I will forever cherish the second gentlemen’s commitment to bring people together in the hope of reinvigorating empathy in the American body politic."

“Speaking with second gentleman Emhoff at the vice president’s residence was absolutely inspiring. I felt so welcomed into his home and being able to discuss how faith is so prevalent in our lives, not just personally but as a country, was truly impactful. The authentic, relatable nature of the conversation surrounding faith caused me to think about the ways we as leaders should lead with empathy. One of Mr. Emhoff’s points that stuck with me is that he and Vice President Harris have always been public servants with deep faith and are just honored to think of more ways to provide space for those to learn from one another through this kind of discourse. As we discussed the importance of the [Jewish] New Year[rm1]  through the celebration of Rosh Hashanah, I reflected upon the new journey and identity that we as a country will take, the deeper we engage with our individual faiths as a collective. I was sincerely moved by the conversation we had and empowered to be confident in my faith identity as I lead.”

“Meeting Douglas Emhoff was my #onlyatgw moment. I was so excited but nervous to be there, but his demeanor made it easy to relax. At GW Hillel, we have been focusing on empathy, which drove the discussion today. I think one of the most interesting discussions we had was when we were talking about the text ‘love your neighbor as yourself.’ Not only is it an important text in Judaism, but it was evident that this text was insightful in both Christianity and Islam. This then led to a discussion regarding values and social justice where Mr. Emhoff brought up the importance of abortion and reproductive justice. Last week, we had a reproductive justice Shabbat, and we talked about the relationships between Judaism and abortion justice. Hearing Mr. Emhoff describe how his Judaism has impacted him in fighting for rights for all was an inspiration and admirable.”

“I am very grateful to GW Hillel for giving me the opportunity to attend this Rosh Hashanah interfaith event at the second gentleman’s residence. As Rabbi Dan went over the centrality of empathy and love in the Torah, I was reminded once again how much unites us. As a Catholic, my faith is such a profound gift and the reason I am who I am today—and it all started when the Lord revealed Himself to me through the word Love (Agape). As I sat in the United States vice president’s living room, surrounded by humans of all faiths and backgrounds, I felt such deep gratitude for the opportunity to live in this country. It is here that I am able to share the Truth with others; that ‘loving your neighbor’ is the commandment that unites us all. The blowing of the shofar at the end of such a beautiful conversation, and the hanging of the mezuzah by Mr. Emhoff, was an experience I will never forget.”

“Meeting with second gentleman Douglas Emhoff at the vice president’s residence is easily my ‘only at GW’ moment. His compassionate, humble character allowed for a truly heartfelt discussion surrounding empathy. We discovered as a group just how prominently empathy is rooted in our various faiths, and it opened our eyes to seeing just how similar our values are, though stemming from different religious sources. Mr. Emhoff stated how important it is to him, under his role, to bring together interfaith communities and find common ground in a world where so much chaos ensues. This discussion provided me with hope that there are highly influential individuals within our political system, such as Mr. Emhoff, who care about much more than just simply pleasing their respective political party. He has demonstrated that he cares about community. Mensches like Mr. Emhoff are committed to creating a world where everyone, regardless of political or religious affiliation, is treated equally and with immense respect. Politicians around the globe have much to learn from Mr. Emhoff, and I am ecstatic to see his pledge in bringing more interfaith communities together come to fruition.”