The campus community can plug into the recently debuted solar-powered table on Square 80 Plaza.
October 30, 2013 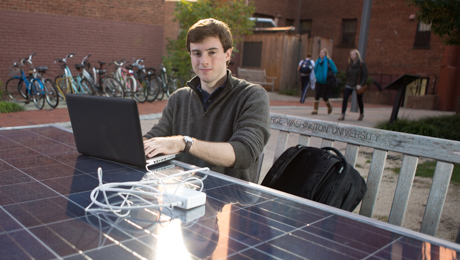 George Washington University sophomore Ben Pryde plugs his laptop into the solar-powered table that he built with the help of students and departments across the university.

The next time the battery on your laptop hits the red zone as you cross the Foggy Bottom Campus, stop by the Square 80 Plaza, to recharge at a student-built solar-powered table that can fuel the equivalent of eight laptops for nearly seven days.

The solar table is the brainchild of George Washington University sophomore and Student Association Columbian College of Arts and Sciences Senator Ben Pryde and was built to convert solar power into alternating current, or AC power, which is used to charge electronic devices, such as cell phones, laptops, stereos and more.

“I wanted to build the solar table to join the university’s efforts to become more sustainable and demonstrate how solar power technology is a vital part of the solution for our energy crisis,” Mr. Pryde said. “The project also encourages cross-collaboration of different disciplines and emphasizes the importance of such interactions in order to confront complex issues.”

The six-foot-long table is made of marine-grade plywood and aluminum that can withstand rain, with a layered tabletop of plywood and a 280-watt solar panel covered with plexiglass and braced by metal corners. Devices can be placed directly on the surface and plugged into one of the eight 120-volt outlets on the sides of the table.

“We wanted this table to be simple to build and durable,” Mr. Pryde said. “It can be built by anyone. You don’t need to be an engineering student to work with these materials or build a solar table, but if you are engineering major, you can still get something out of the process.”

The project was funded through the GW Center for Student Engagement, the SA and the Residence Hall Association. Students representing various organizations, including the SA Senate, and staff from the Division of Student Affairs, GW Division of Operations, the Office of the Senior Vice President and General Counsel and other departments also contributed to the construction and implementation of the project.

The solar table works by a simple process of energy conversion within the base of the table. Sunlight is absorbed through the solar panel and up to 280 watts of direct current (DC) is transported through the charge controller, which monitors and protects six deep-cycle batteries that store energy.

This energy is then converted to AC energy in the 3,500-watt inverter. This AC energy can be accessed through  the eight 120-volt outlets to power devices, such as a stereo or LCD projector used for an outdoor movie.

In all, the table can support the equivalent of eight cell phones for 85.40 days or one LCD projector for 14.66 days, according to Mr. Pryde.

“As students use the table, they are contributing in a small, personal way to the reduction of the university's overall carbon footprint, which aligns with university goals,” said Shannon Ross, stakeholder engagement coordinator in the Office of Sustainability. “However, the larger impact is to increase the campus community's awareness of renewable energy technology.”

“By having the solar table readily accessible to students, we hope that they begin to think more about alternative energy and how they can make an impact in their personal energy use,” she added.

Mr. Pryde gained experience building a smaller scale version of the table with a friend at the Bush High School in Seattle and first pitched the idea for one on the university campus in October 2012, he said.

He led a team to draft the proposal, outlining how the solar table would improve student space, increase awareness about sustainability and align with the university’s strategic plan efforts to create “innovation through cross-disciplinary collaboration.”

“To design the table, the concerns of the university, the needs of the students and the environment it would be placed in were all factors that shaped the final design,” Mr. Pryde said. “I approached Tim Miller [associate dean of students] with my ideas during the process, and he gave me feedback.”

“This is just one example of the power students have when they use their voices in the right way,” Mr. Miller said. “The students came to me with this idea and they were organized, tireless and willing to work with us to make the project a reality.”

The proposal and funding were finalized last spring, and Mr. Pryde began ordering parts over the summer. In the fall he assembled a team of student volunteers and after many weekends of hands-on work—from installing the parts to constructing and painting the table—the table was completed and placed on Square 80 Plaza, just one year after its inception.

“I’d like the table to be used by the university community to make their experience at GW that much better,” Mr. Pryde said. “I would also encourage students to take on new initiatives because by being a part of team and working with the university, a lot of positive change can result.”