GW Veterans and the GW Afghan Student Association collected home goods to help translators resettled in the D.C. area feel at home.
May 25, 2017 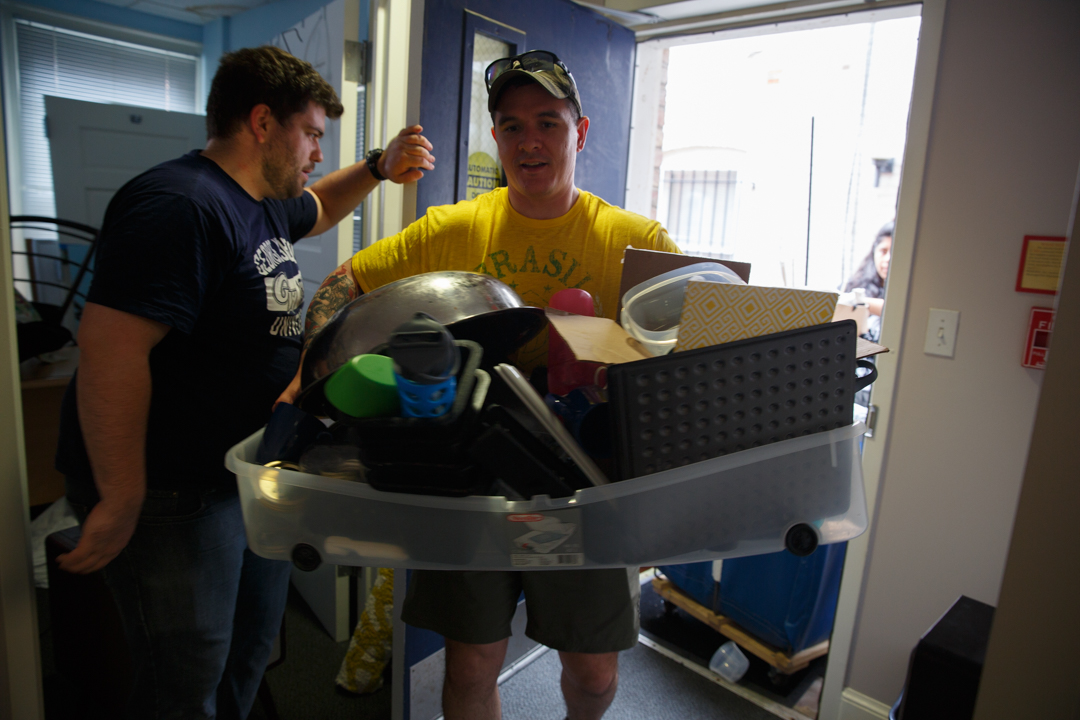 Verónica María Hoyer lifted a heavy box of home goods, balanced them on her hip and walked it into an office temporarily transformed into a storage room. Over the past two weeks, she had created a delicate system of organized chaos within the Military Community Center on the George Washington University’s Foggy Bottom Campus as piles of donations grew larger.

She found a place to set down the cardboard box and began to sift through it. The pots and pans went in a separate box. The Tupperware collection had taken over an entire table. There was another bin primarily reserved for water filters.

“See?” she said, picking one up. “This Brita pitcher is perfectly fine.”

The back door opened and slowly, a pair of volunteers wheeled in a cart stacked high with their latest haul of miscellaneous donations collected as students moved out of GW residence halls. As they unloaded the heavy cart and wiped sweat from their foreheads, Ms. Hoyer, B.A. ’17, asked about the forecast. There was a sofa to pick up, and they couldn’t risk leaving it out in the rain.

It was the day after graduation, and Ms. Hoyer was giving back. After years of seeing home goods and furniture piled up on curbs at the end of the school year, Ms. Hoyer came up with a way to give those items a second lease on life. She teamed up with No One Left Behind, a nonprofit that aids translators from Afghanistan and Iraq who have resettled in the United States after receiving Special Immigrant Visas.

These translators worked with the U.S. military in the Middle East and Afghanistan and helped soldiers communicate with locals. Because of their work, they often become targets for terrorist organizations who view them as traitors, Ms. Hoyer said. Even still, obtaining a visa can be difficult, and when they are able to come to the United States, they can bring only a few bags.

“I thought, why don’t I collect all that stuff people throw away all the time,” Ms. Hoyer said.  “I know that people waste, throw away all this stuff every year, and someone needs to collect it.” 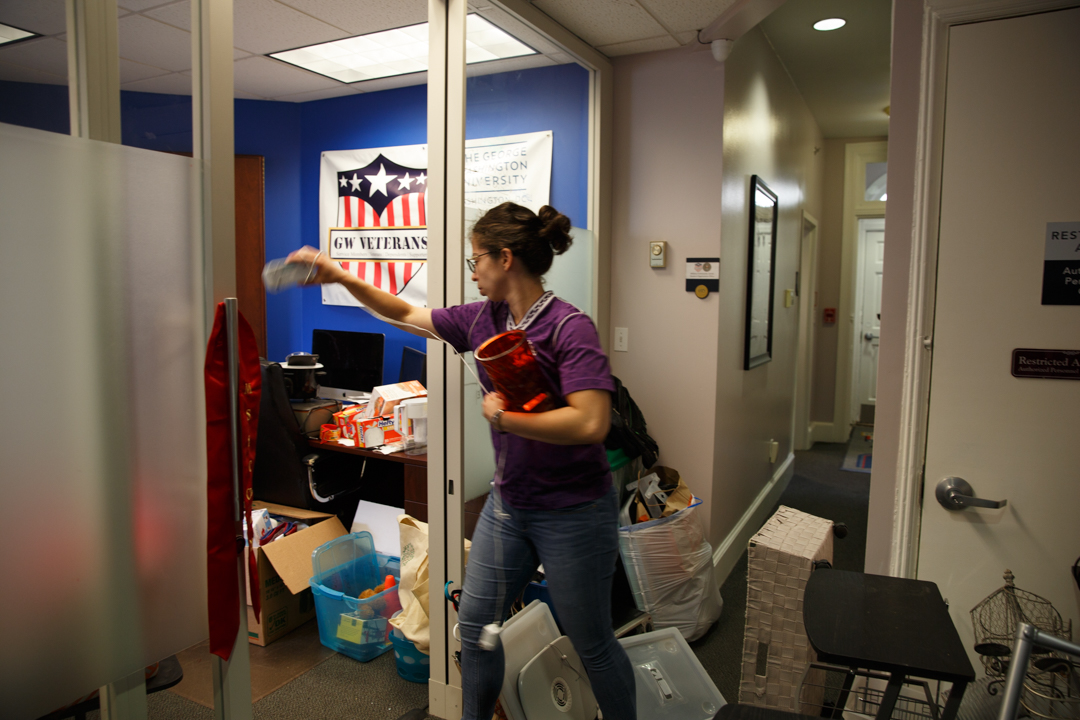 Verónica María Hoyer, B.A. '17, organizes donated items in the Military Community Center at 2035 F St N.W. Ms. Hoyer is an Air Force veteran who served in Afghanistan. As an undergraduate student, she was involved with GW Veterans and the Afghan Student Association. (William Atkins/ GW Today)

Ms. Hoyer knows firsthand how important these translators are to the military. She is an Air Force veteran who twice was deployed to Afghanistan in 2011 and 2012, where she worked in intelligence aircraft.

“My life wasn’t on the line every day, but I know that these translators saved a lot of our guys’ lives,” she said. “We owe them a lot. If you’re willing to be on the lines with us and put your lives in danger, I want to help you.”

Ms. Hoyer proposed collecting these donations as part of a joint project between GW Veterans and the GW Afghan Student Association, two organizations she was heavily involved with as a student. Volunteers set out donation boxes in 15 Foggy Bottom residence halls during finals week and returned regularly to collect any items students dropped off.

The volunteers have been veterans, members of the Afghan Student Association, other GW students and members of the Washington, D.C., community. They have been shocked by the volume of donations, said Ms. Hoyer, who added that Jorge Rios, director of operations for GW Veterans, was invaluable in running the operation.

“We were not expecting to get this much stuff, so we were completely overwhelmed,” she said. “People just started piling it up, so it would be like little mountains in the hallways.”

Volunteers collected more than five U-Haul trucks full of donations and enough items to help more than 40 families in the D.C. region. No One Left Behind has picked up items from the Military Community Center at 2035 F St N.W. every few days since finals week. 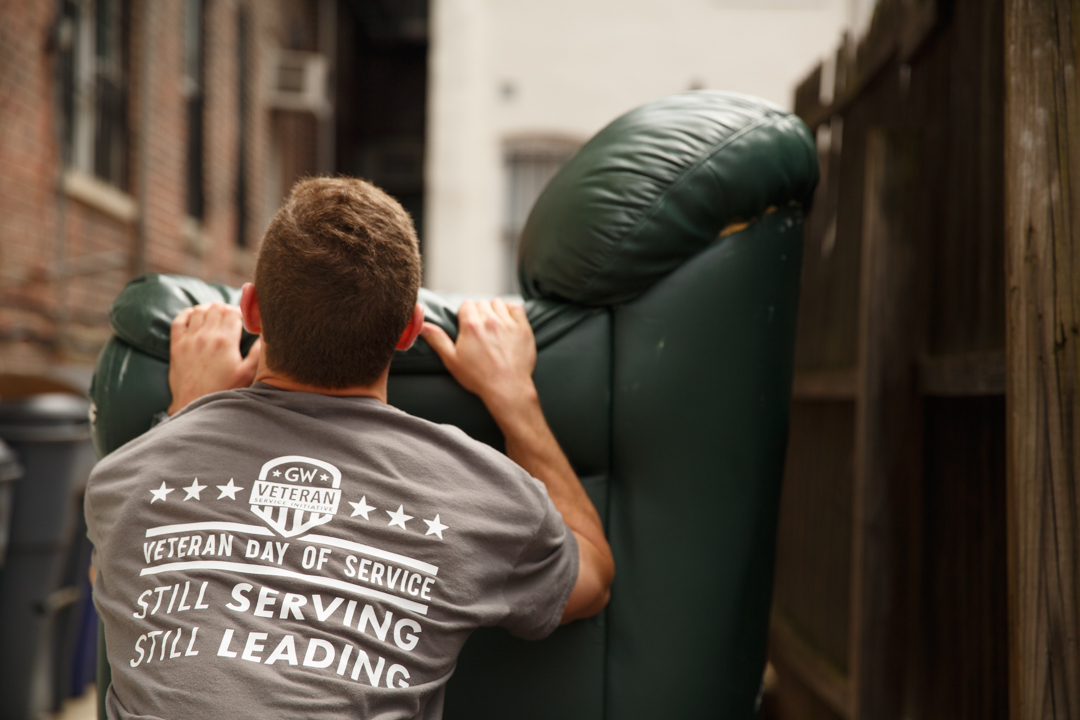 Alex Morris, B.S. ’17 and a Navy veteran, said when he joined the military and was training to be a linguist, he learned Arabic directly from a former translator resettled in California. During his service, he saw the kinds of contributions they made to American troops and credited them for saving some of his friends when they were in need.

“They do us a service and that helps us and our efforts overseas, and because of that they are put in danger,” Mr. Morris said. “The least we could do is try and get them out of danger really and do everything we can for them.”

The donations might seem trivial, he said, but to families in need, items such as plastic pull-out drawers, bed sheets and coffee pots mean a lot.

During one donation pick-up a former translator came to help load and unload the trucks, Ms. Hoyer said. He explained how he came from Afghanistan with his wife and three daughters and had been sleeping on the floor of their apartment.

“All we had to offer them really were the comforters that students were throwing away, the pillows, pillowcases and the mattress pads, but they were so happy to have mattress pads,” she said. “Providing these things, that is not really doing a lot, but otherwise this stuff would have been thrown away, so I think that’s a good use of it.”

Hannah Zikria-Hagemeier, who this fall will be a junior studying neuroscience and psychology, is treasurer of the Afghan Student Association. She has lived in the United States her whole life, and knows the importance of giving back to the local Afghan community.

“The opportunities that I have been given, being born here and growing up here, not really having to go through the hardships that I know other people have to go through, I feel really lucky and thankful but I also feel like I do need to give to other people who aren’t as fortunate,” she said.

These donations don’t seem like luxuries to many Americans, but for people starting new lives “it’s a real luxury just to have some necessary items,” she said.

In Afghanistan, families often eat their meals seated on rugs the way Americans sit around a table. Without rugs, they have to sit on hard floors. Having things to furnish and clean their apartments makes these visa holders feel like they have some ownership of their space. 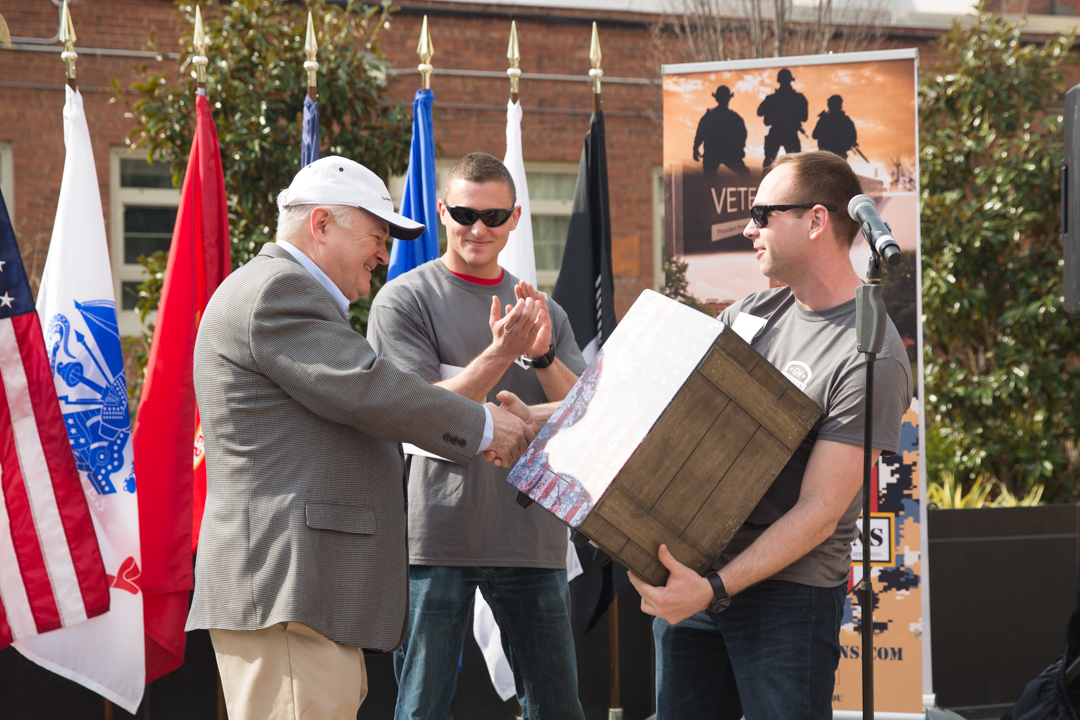 GW Veterans and Others Complete Day of Service