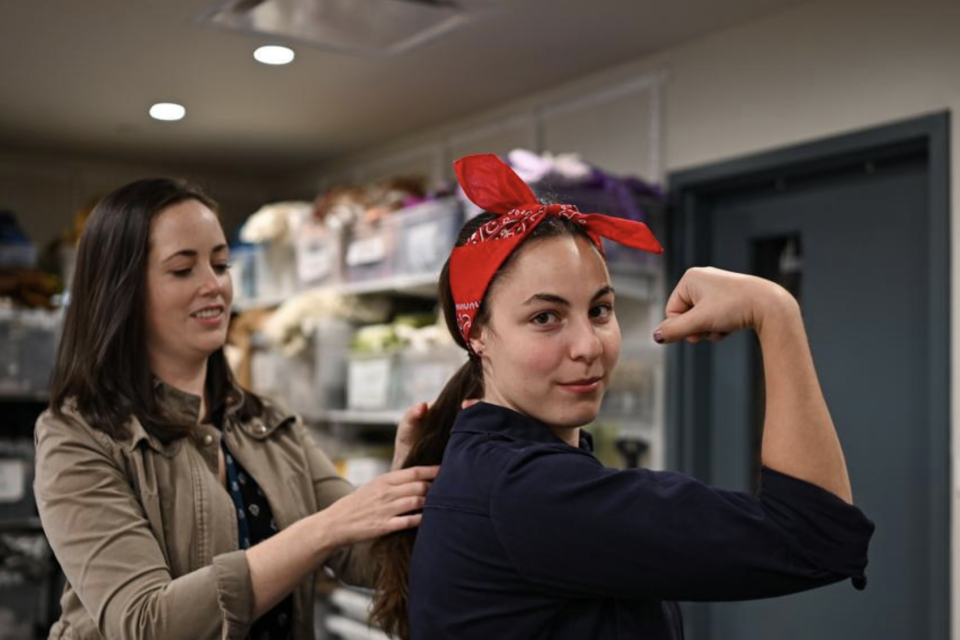 "We can do it!" First-year student Kira Young embodies female power as Rosie the Riveter; costumer Emily Vallozzi helps her get the right period look. (Kate Woods/GW Today)

As we get closer to Halloween, we may hear moans and groans from friends who have no idea what to do for a costume. Time to prepare has grown monstrously short; budgets are terrifyingly tight; ideas are frighteningly scarce. But there’s no need to fear—with a few tips from Emily Vallozzi, GW’s instructional costume lab associate, burying seasonal anxieties can leave us feeling sweeter than candy.

Since coming only weeks ago to the Corcoran School of the Arts and Design, part of George Washington University’s Columbian College of Arts and Sciences, Vallozzi hasn’t had much time to think about seasonal costumes. The theatrical production of “Medea” has kept her busy. Nonetheless, she’s ready with Halloween costume suggestions and useful advice. Her advice boils down to two main principles: Have fun and be respectful.

“Don’t take it too seriously,” Vallozzi said. “Don’t feel pressured to have the most amazing costume or something that looks professional. The whole idea is just to have fun.”

It’s important to be respectful of other people and other cultures, she added, so dressing up like someone from another ethnicity or culture is strongly discouraged.

“Respecting other cultures means educating yourself about the unique history, traditions and struggles of that specific group, not imitating them with a costume or make-up,” Vallozzi said. “If you have any doubt about whether a costume might be offensive, or might not be accepted by everyone, just choose a different costume. There are so many options out there! Make sure it’s a costume that everyone would enjoy, because again, the whole point is to have fun.”

Plenty of simple ideas can help people join in the fun without having to purchase an expensive costume or make something elaborate, Vallozzi said. Many great costumes are built around items already at hand.

“I was thinking about items that students might already have in their closet or in their room that could be used as the starting point for a costume,” Vallozzi said. “If you have a white dress, you could be a Greek goddess or an angel; if you have a black dress, you could add a witch hat or cat ears; you could add a white shirt underneath to be Mary Poppins. If you have a flannel shirt and jeans or overalls, you can be a scarecrow. Or just be a farmer, if you don’t have the straw or a straw hat. If you have a suit, you can wear a Superman T-shirt under the suit and leave the white shirt unbuttoned and look like Clark Kent transitioning into Superman; if you have glasses, that’s a bonus. If you have sunglasses, you could be one of the characters from ‘Men in Black’—again, it’s just using things that you already have.”

Though theatrical costumes and Halloween costumes obviously differ, she said, they share some similarities.

“The whole idea is dressing up in something that you might not dress up in every day,” Vallozzi said. “That can be really fun; it can be a great way of expressing yourself; it can be a way to pretend you’re someone else for a little while. That’s basically what actors are doing, with a lot of their craft mixed in.” But Halloween costumes are typically more informal than the things you would find in a professional theater, she added, and need to be within your budget. Theatrical costumes are often very expensive. If you’re sewing something for yourself, it’s going to look different, and that’s OK. “It’s also something that’s going to be worn for just one night, as opposed to the run of a show or a dance concert.”

Some people prefer to dress as someone (or something) familiar, while others are drawn to moving completely outside their day-to-day reality, Vallozzi said.

“It’s a time when you have that freedom to wear something you wouldn’t normally wear. As long as it’s done in a way that is respectful, you can’t go wrong.”

Pumpkins and Pushkin on Kogan Plaza