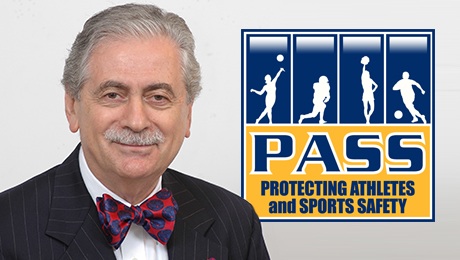 Eliot Sorel is a clinical professor of global health in the GW School of Public Health and Health Services and of psychiatry and behavioral sciences in the School of Medicine and Health Sciences.

Although the number of reported sports-related concussions in youth has risen in the past decade, and the topic has sparked an increasing amount of public interest, much remains unknown about traumatic brain injuries that can lead to severe cognitive, emotional and physical distress—or even death.

The extent to which concussions occur in youth, how to properly diagnose them as well as their short- and long-term consequences is still largely a mystery, according to a new report released by the Institute of Medicine and the National Research Council.

As a global health leader, psychiatrist and soccer player, Eliot Sorel wants to strengthen the conversation and fill in the research gaps regarding young athletes and concussions.

That is why the clinical professor of global health in the GW School of Public Health and Health Services and of psychiatry and behavioral sciences in the School of Medicine and Health Sciences has launched Protecting Athletes and Sports Safety (PASS)—a two-year initiative aimed at reducing catastrophic injuries among young athletes.

The initiative kicked off at last week’s National Conference on Youth Sports Safety, which brought together participants from more than 75 governmental organizations and speakers from youth, collegiate and professional sports to discuss the alarming trend.

Dr. Sorel is co-chairing the initiative with former U.S. Surgeon General David Satcher. SPHHS and the Satcher Health Leadership Institute at  Morehouse School of Medicine partnered to bring the conference to fruition.

“Academic centers like GW could play a very important leadership role on this topic, at the educational, research and policy levels,” Dr. Sorel said.

He talked to George Washington Today about his initiative and the intersection of those three areas.

Q: What is the PASS Initiative?

A: It is stimulated by the ever-present and increasing incidents of traumatic brain injuries across sports in the United States, affecting our youth, collegiate and professional players. The conference was the beginning of a two-year initiative. The intent was to gather a group that is interdisciplinary, committed and well-informed about these issues to begin a national conversation along education, research and policy.

We’d also like to ask a few questions. For instance, are success, safety and enjoyment of American sports mutually exclusive or complementary? My view is that they are complementary. At the moment, they can appear as if they are mutually exclusive, though, because unfortunately, the current culture often encourages violence in sports. This is not beneficial for the sport or for the people involved and poses significant threats to the most important organ in our body, the brain. And frankly, spectators are part of the problem and so are parents.

Q: Why is this topic of particular interest to you?

A: I am a former soccer player and soccer coach. I remain involved in the sport through my own fitness every week, and I am an avid observer of sports, both American football and the real football—soccer! Over the years, I have become concerned about the number of injuries occurring, and earlier this year I had a conversation with David Satcher about teaming up together to create this national forum. We discussed this subject also with Mark Johnson, the dean of the Howard University College of Medicine. All three of us have been involved in youth sports, both as players and coaches.

Q: What is known, unknown, and how can we fill in the gaps in knowledge regarding sports concussions?

A: We have not yet developed the definitive scientific evidence on traumatic brain injuries. One of the major intents of our initiative is not only to raise awareness about the seriousness and prevalence of these injuries, but also to stimulate development of more comprehensive research. That scientific base will further educate all of those involved in sports, as well as inform and influence policymakers.

The National Institute of Neurological Diseases and Stroke is now carrying out a comprehensive research project on the consequences of repeated hits to the brain by examining the brains of deceased, former football players. These types of repeated injuries can cause chronic traumatic encephalopathy (CTE) that may lead to dementia, depression, suicide and death. However, my interest is not to wait until people die from these injuries, but rather to start a research project that will address the issue early on in a player’s life and prevent their occurrence. A few other colleagues and I are in the process of developing a research proposal that will focus on prevention and early intervention. It will also be one of the foci of our National Council on Youth Sports Safety.

An opportunity for another area of research is to examine the gender similarities and differences between female and male athletes. One thing that most people probably do not realize is that girls have more concussions than boys in soccer, according to  data from Virginia’s Fairfax County Public Schools recently published in the Washington Post. It’s unclear to me whether that’s an absolute fact or not, because girls are more likely to report an injury than boys. Boys may “tough it up.” There is also a physical difference between girls and boys, in terms of strength of the muscles, especially in the neck.

Q: What about policy initiatives are currently in place? What progress still needs to be made?

A: Forty-nine states now have policies in place regarding youth sports safety that give guidelines on what to do if a player is injured. But these policies have their limitations, by nature of the scant scientific evidence.The Centers for Disease Control and Prevention has put together packages of information to educate players, parents and coaches about concussion facts, prevention measures and reporting advice.

We cannot wait until we have the definitive scientific evidence to begin to have some rules and enhanced policies to prevent life-disabling brain injuries. We have a set of policies now with existing evidence being mindful that the evidence will be evolving and those policies may need to change.

Q: What about college? How can your efforts be translated to college athletics?

Q: What is your bottom line message to all of those stakeholders?

A: Sports and physical activity are absolutely essential for health promotion and illness prevention, for educational performance enhancement and for well-being throughout one’s life. Our message is one of hope. We want to enhance the safety of sports, so players can enjoy them, succeed at them without the worry of injury and with the knowledge that help will be available when needed and backed up by the best scientific evidence. So research is extremely important and so is education and primary prevention, as well as diminishing a culture of violence in sports.