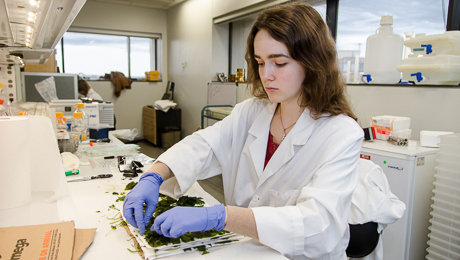 While studying at the University of Oxford, Douglas F. Nixon, a professor in George Washington University’s School of Medicine and Health Sciences, found that the English custom of conversing over a cup of tea could lead to any number of things—including scientific advances.

“If you can get people out of their office and into a space with a welcoming atmosphere, then you create an opportunity to brainstorm and form new ideas,” said Dr. Nixon, Ross Professor of Basic Science Research and chair of the Department of Microbiology, Immunology and Tropical Medicine.

Dr. Nixon will put this philosophy into practice as he leads two new labs in Walter G. Ross Hall: the Research Center for Neglected Diseases of Poverty and the Center for Basic Research for the Cure and Prevention of HIV/AIDS.

The nearly 35,000-square-foot lab space, which occupies the fifth and sixth floors of Ross Hall, features two “interaction” areas, 104 individual work stations, a microscope room and a tropical life cycle where parasites can be cultured. These spaces were created to encourage discussion, collaboration and innovative research.

The C06 project in Ross Hall has been awarded LEED GOLD certification. 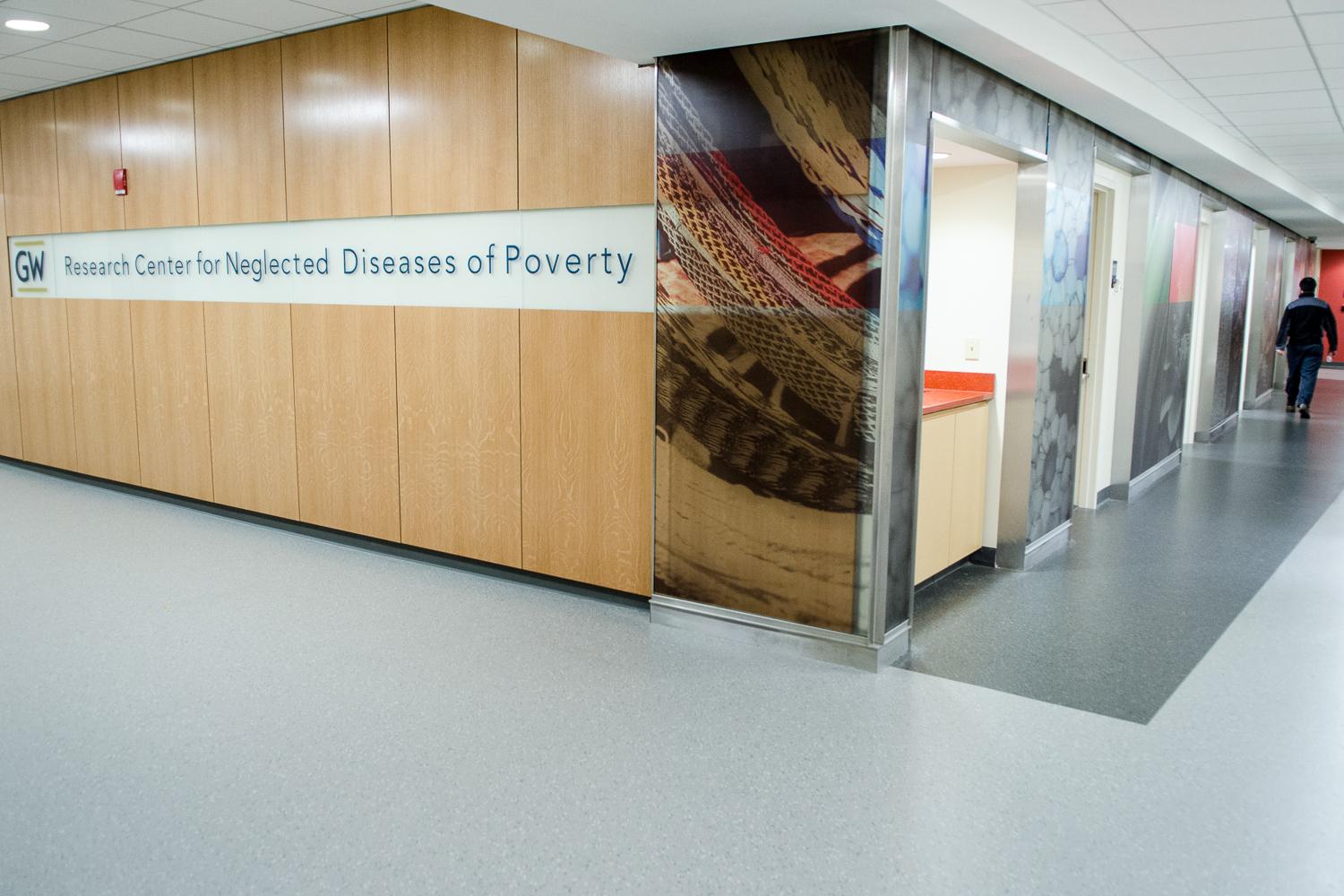 The Research Center for Neglected Diseases of Poverty is one of two new lab spaces in the School of Medicine and Health Sciences' Walter G. Ross Hall. 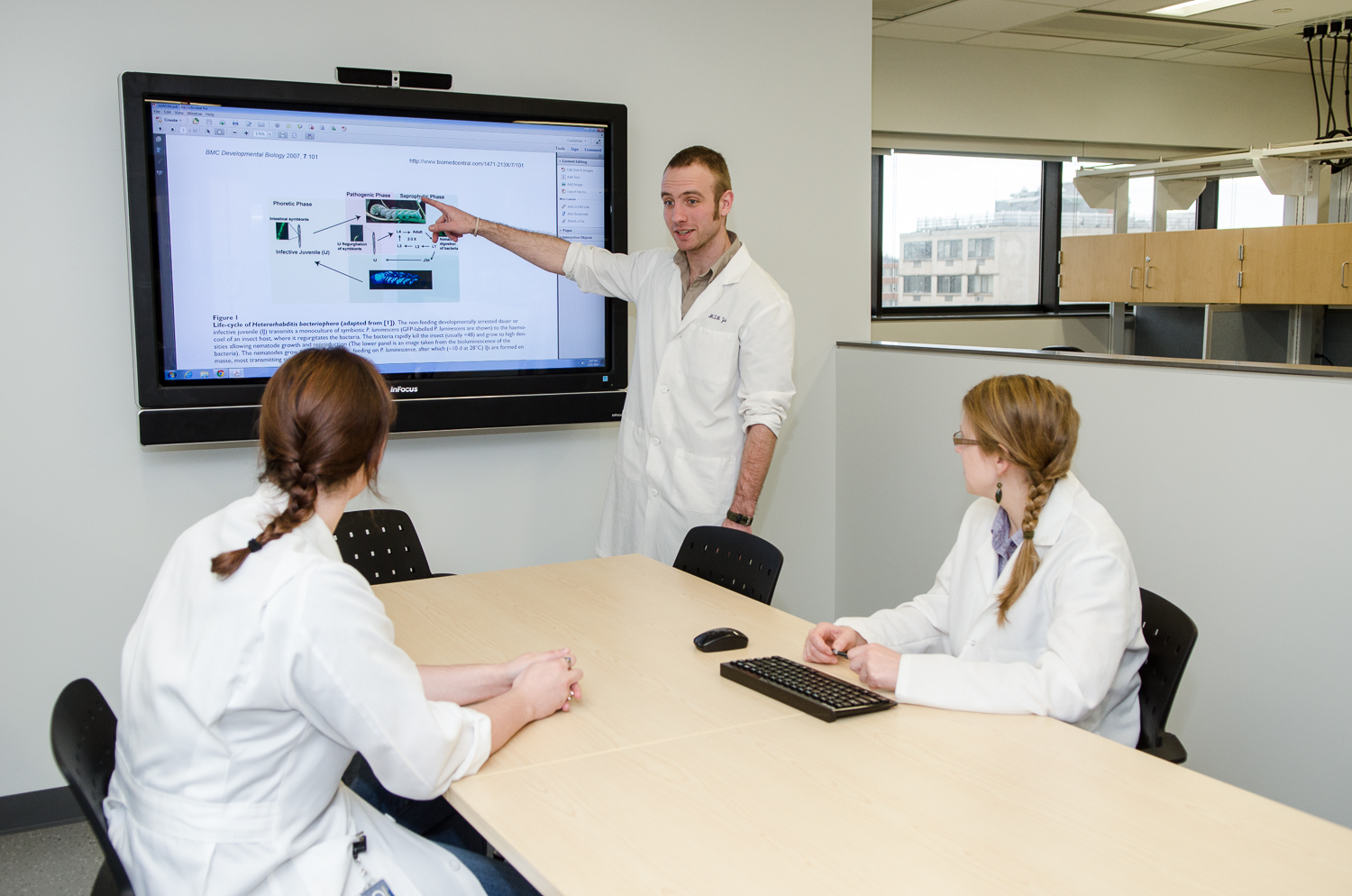 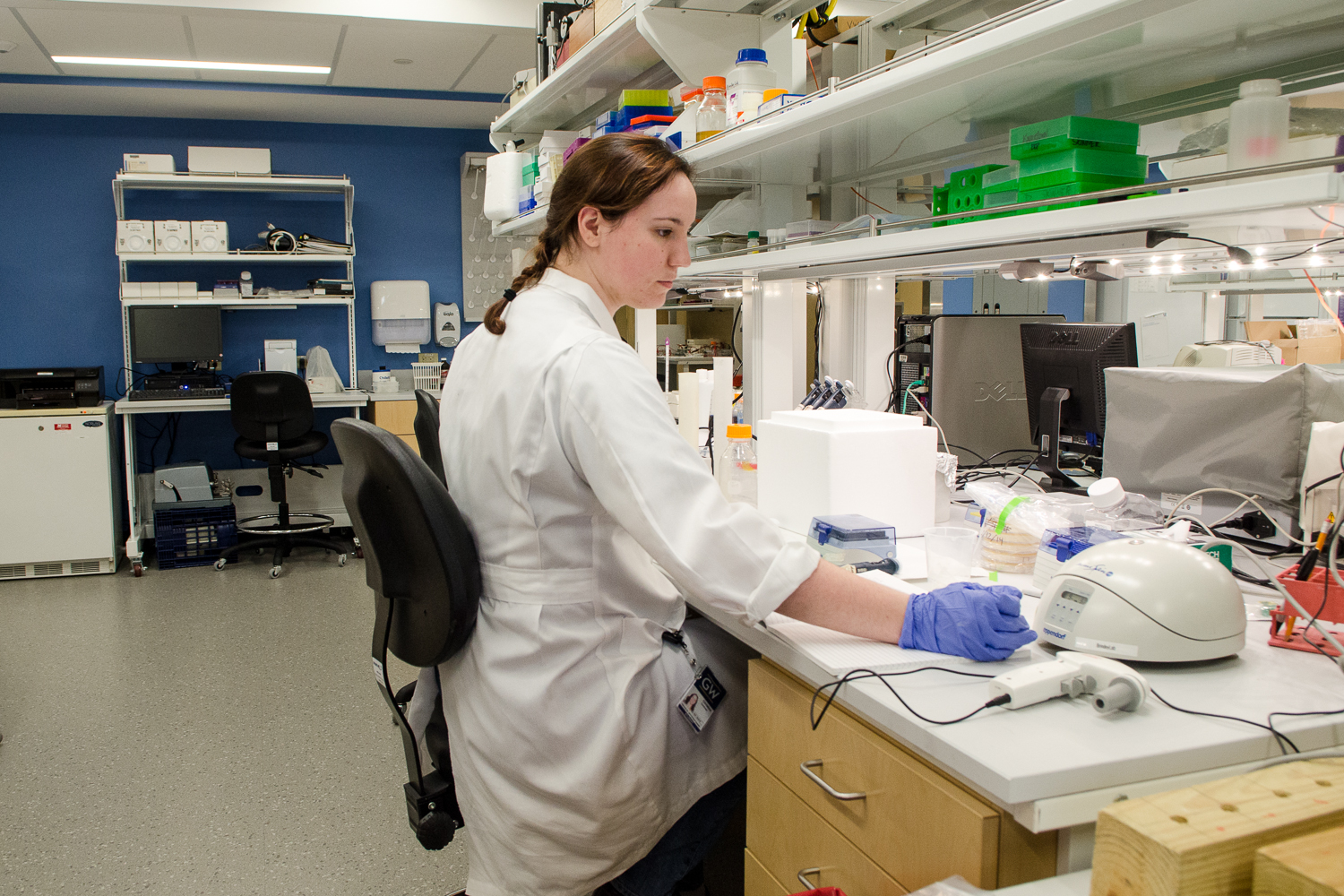 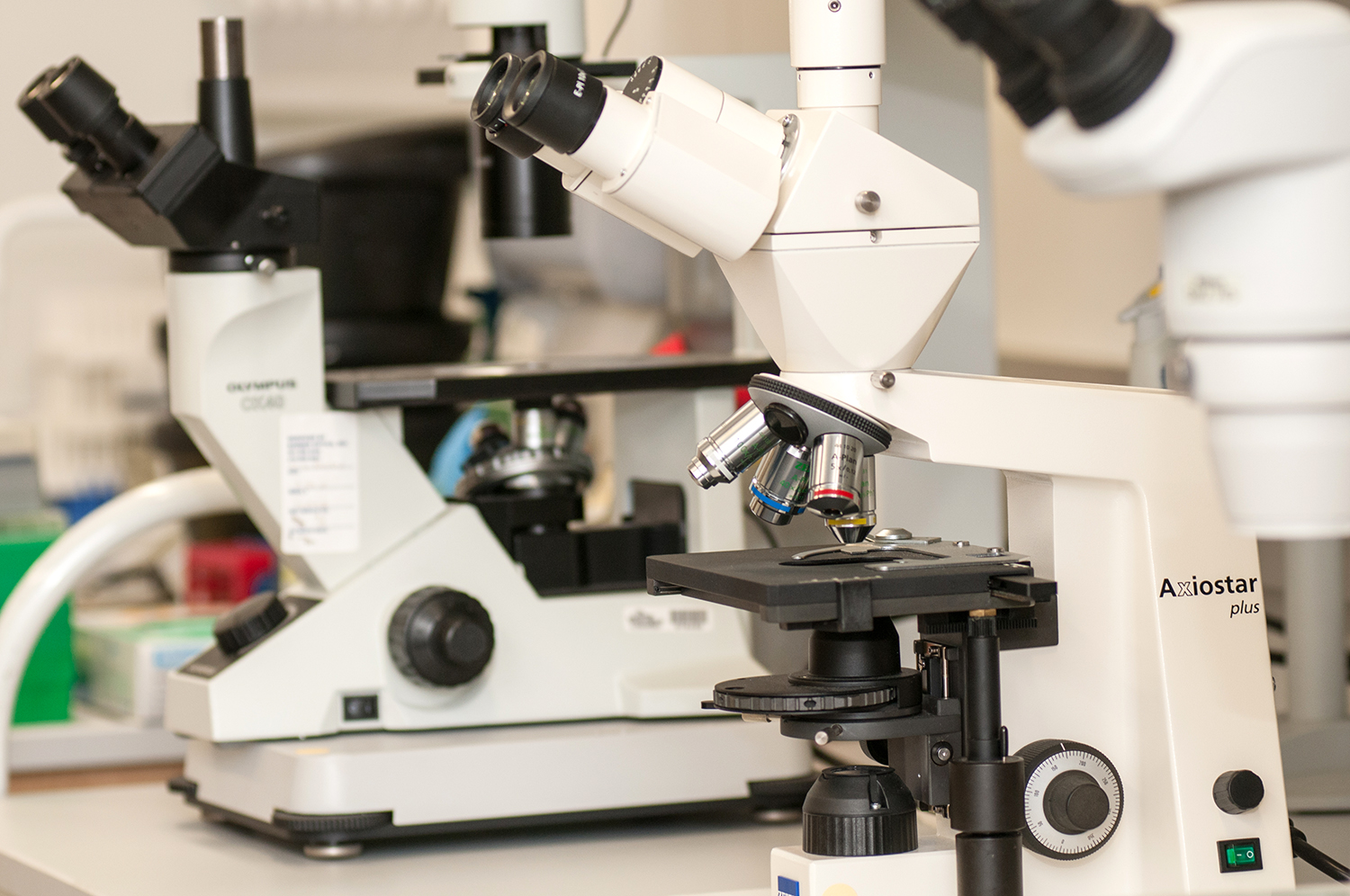 The nearly 35,000-square-foot lab space, which occupies the fifth and sixth floors of Ross Hall, features two 'interaction' areas, 104 individual work stations, a microscope room and a tropical life cycle where parasites can be cultured. 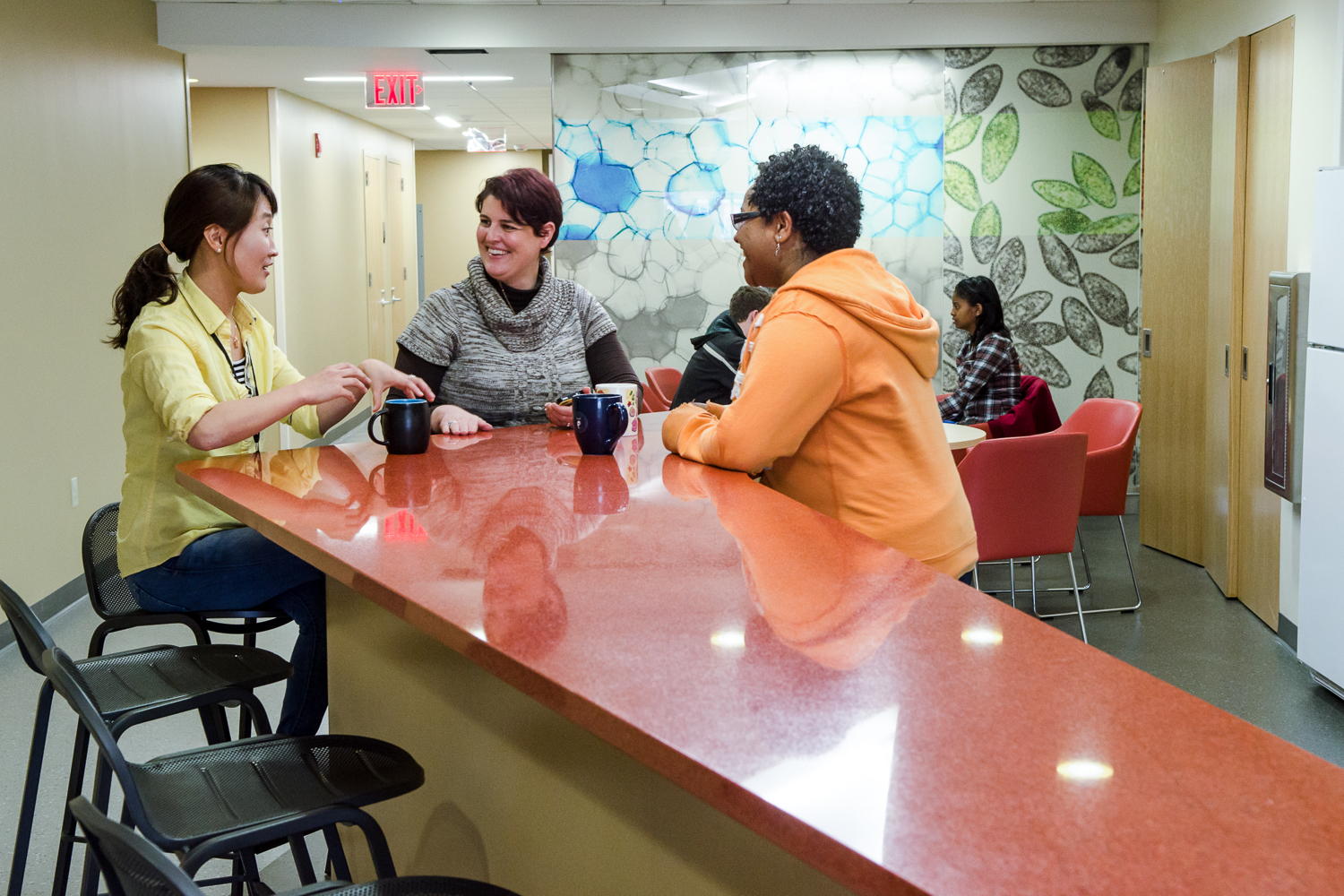 Lounge spaces outside of the labs are intended to cultivate conversation and collaboration. 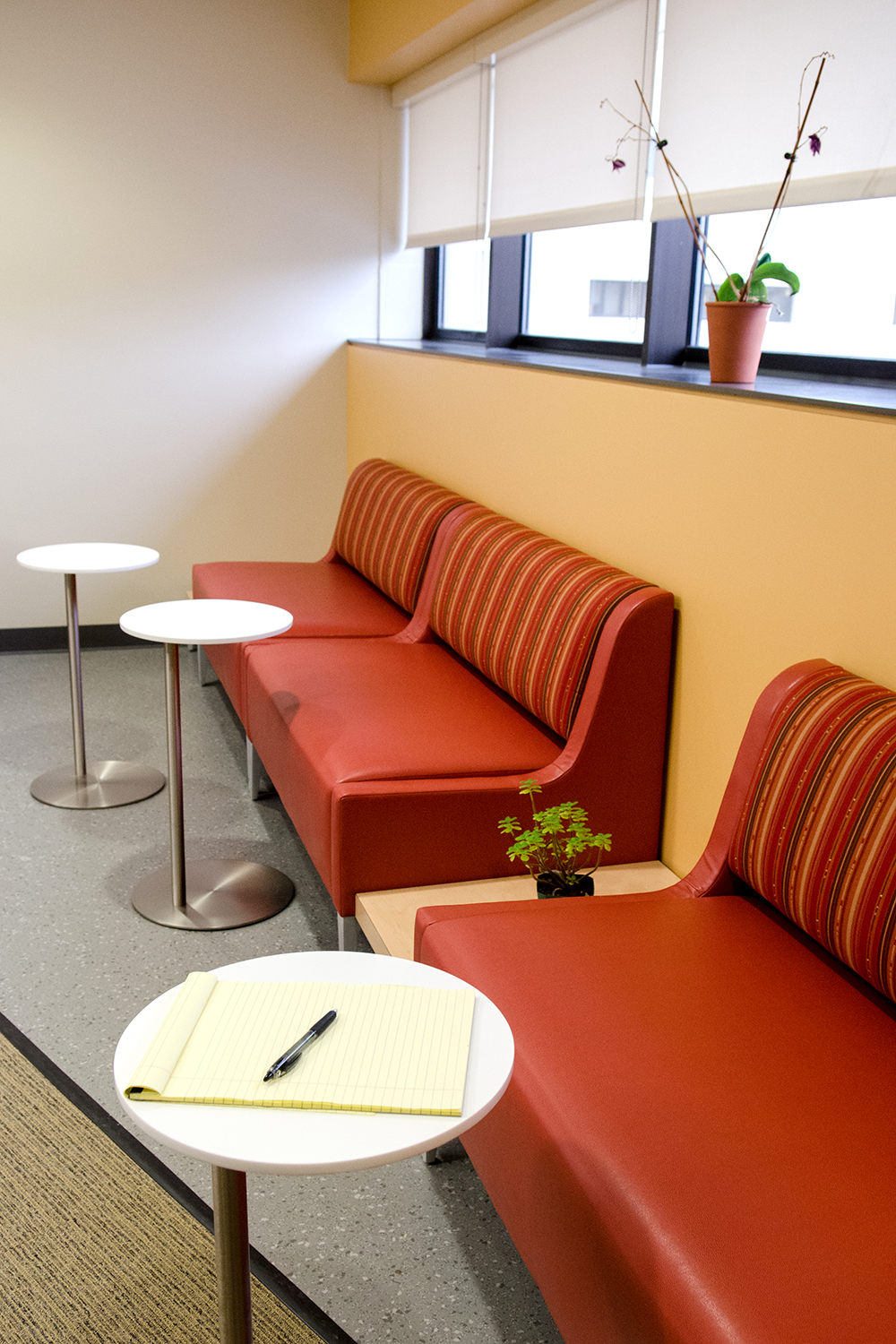 Lounge spaces outside of the labs are intended to cultivate conversation and collaboration.

The state-of-art labs have been constructed with a $15 million grant, which SMHS received in 2010 from the National Institutes of Health through the Recovery Act Limited Competition: Extramural Research Facilities Improvement Program.

The space is equipped with six InFocus Mondopads — wall-sized tablet PCs with 55-inch LCD touch screens, digital interactive whiteboards and video conferencing capabilities. The screens will play a major role in the lab’s international work. Rather than replacing face-to-face meetings, they will enhance them by streamlining the preparation of background materials, Dr. Nixon said.

“Scientists often lack opportunities to interact with fellow scientists,” Dr. Nixon said. “In order to generate new ideas and establish existing collaborations you need a space where people can meet.”

A pioneer in HIV/AIDS research, Dr. Nixon will conduct research in the lab that could contribute to the science behind an HIV cure or vaccine.

“With our existing faculty and with new recruits, I’m confident we can create an intellectual, scientific hub where GW can make a major contribution to HIV/AIDS research,” he said.

Research on neglected tropical diseases such as hookworms—which influenced the NIH’s decision to award the grant to the Department of Microbiology, Immunology and Tropical Medicine—will also be conducted in the new labs. Jeffrey Bethony and David Diemert, both associate professors in the department, are currently working to develop and test a novel, low-cost hookworm vaccine to help control human hookworm infection in endemic countries. Scientists in the department are also trying to understand more about Opisthorchis viverrini, or liver fluke, a cancer-causing worm that is rampant in Thailand.

As for the future, Dr. Nixon hopes the new labs will serve as the model for other university labs to emulate, and will one day be internationally recognized as a scientific hub for HIV/AIDS and tropical medicine research.

“We hope that the research conducted in the new the Department of Microbiology, Immunology and Tropical Medicine space at GW will contribute significantly to reducing the burden of HIV/AIDS and infectious diseases of poverty in the world,” he said.