Professor Igor Efimov and his collaborators are pioneering a new class of medical instruments that use flexible electronics to improve patient outcomes in minimally invasive surgeries.
September 11, 2020 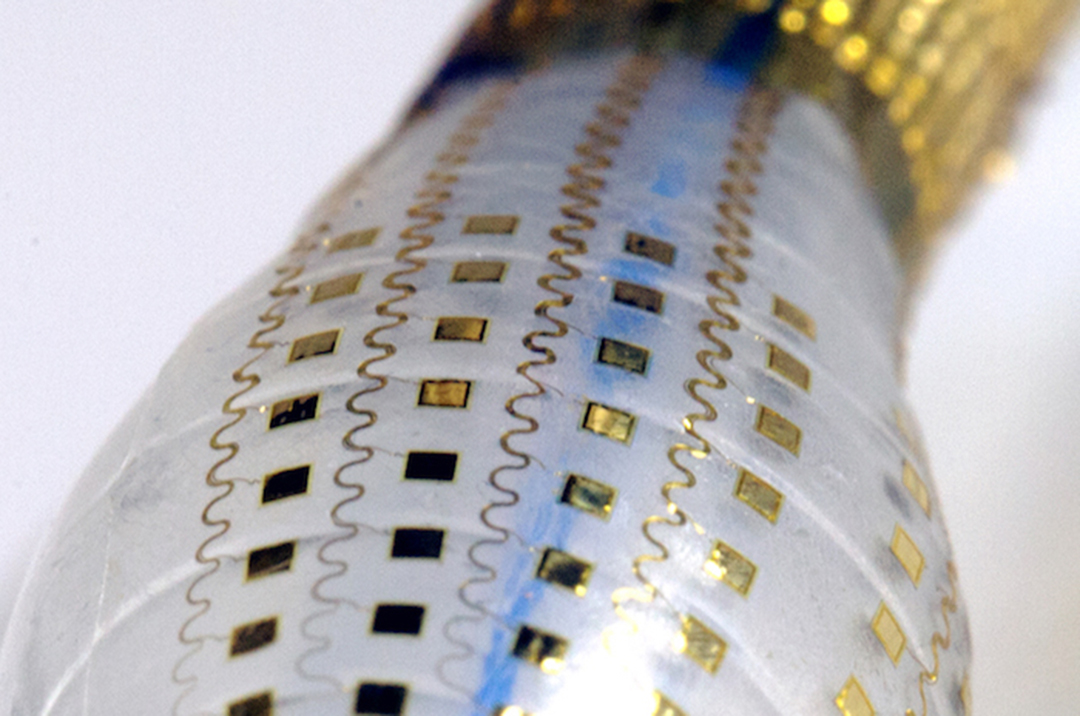 A conformal array of electrodes affixed to an inflated balloon catheter.

A team of researchers led by a George Washington University School of Engineering and Applied Science professor developed a new class of medical instruments equipped with an advanced soft electronics system that could dramatically improve the diagnoses and treatments of a number of cardiac diseases and conditions.

Detailed in a new paper published in the journal Nature Biomedical Engineering, the researchers, led by Igor Efimov, the Alisann and Terry Collins Professor of Biomedical Engineering, applied stretchable and flexible matrices of electrode, temperature and pressure sensors, along with actuators that enable movement, to a balloon catheter system. Balloon catheters are often used in minimally invasive surgeries or ablations, a procedure for restoring normal heart rhythm, to treat conditions such as heart arrhythmias.

“We have taken new breakthrough materials and fabrication techniques typically employed by the semiconductor industry and applied them to the medical field, in this case cardiology, to advance a new class of medical instruments that will improve cardiac outcomes for patients and allow physicians to deliver better, safer and more patient-specific care,” Dr. Efimov said.

The new system, which conforms better to the body’s soft tissue than current devices, can perform a variety of functions, including simultaneous in vivo measurements of temperature, the ability to customize diagnostic and therapeutic functions, and real-time feedback. The new system also can dramatically reduce the length of invasive ablation procedures and exposure of patients and doctors to X-ray radiation.

Many minimally invasive surgeries rely on catheters inserted into the body through small incisions to conduct diagnostic measurements and therapeutic interventions. Physicians, for example, use this catheter-based approach to map and treat irregular heartbeats, or arrhythmias, often by locating and killing or ablating cardiac tissue area that is causing the arrhythmia. 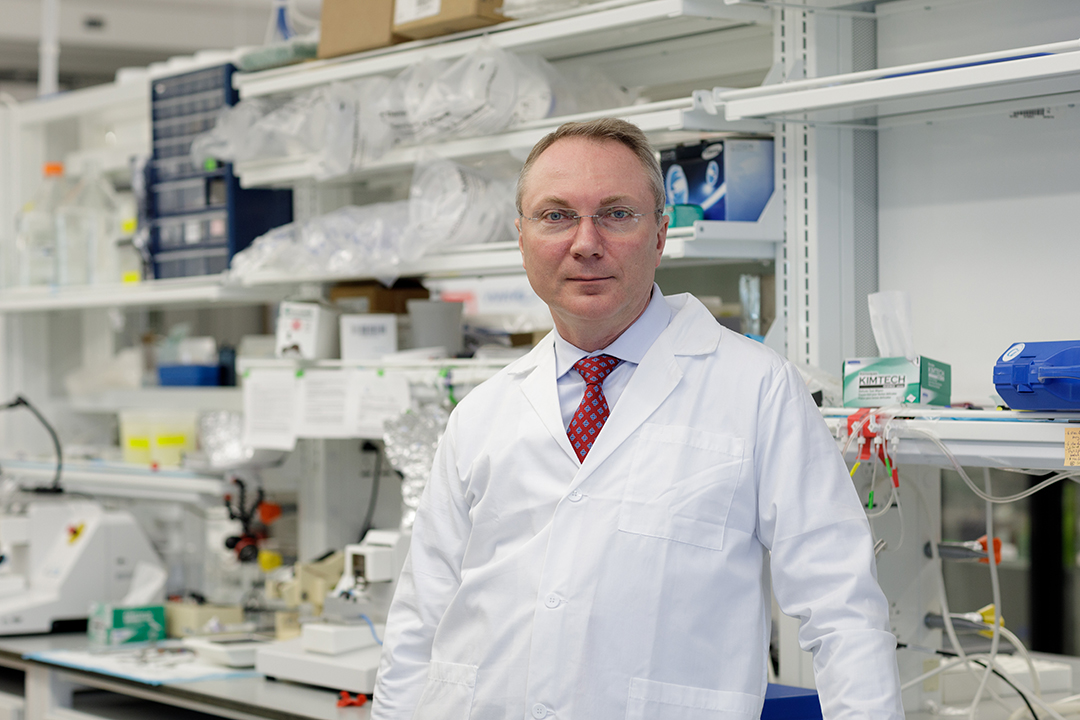 Igor Efimov, the Alisann and Terry Collins Professor of Biomedical Engineering in the School of Engineering and Applied Science. (William Atkins/ GW Today)

Though widely used in surgery, the current catheter-based approach has a number of drawbacks. The rigidity of today’s catheter devices means they do not conform well to soft, biological tissues, impacting high-fidelity mapping of an organ’s electrophysiological signals. Current devices make contact with only a small part of an organ at a time, making it necessary to constantly move a probe around, lengthening medical procedures. Current catheter systems also are limited in the number of functions they can perform, requiring physicians to use multiple catheters in a single ablation procedure.

Long procedures also risk exposing both patient and physician to potentially damaging X-rays, as physicians rely on X-ray images during the course of the surgery to guide their catheters, Dr. Efimov said.

The new class of instruments the researchers developed will allow physicians to acquire a rich set of electrophysiological information and to complete surgeries in shorter times with a single instrumented catheter system.

“We leveraged our advances in soft, stretchable and flexible electronics to develop medical devices that include elastic, interconnected arrays of sensors and actuators, capable of gently and softly conforming to tissue surfaces,” said John A. Rogers, a collaborator on the project and the Louis A. Simpson and Kimberly Querrey Professor of Materials Science and Engineering, Biomedical Engineering and Neurological Surgery at Northwestern. “The result improves the accuracy and precision of associated surgical processes, for faster, less risky and more effective treatments.”

Dr. Efimov, a member of the National Academy of Inventors, has received several awards and expanded his research portfolio on cutting-edge implantable devices since joining GW’s Department of Biomedical Engineering in 2015. He uses GW’s Nanofabrication and Imaging Center (GWNIC) in the Science and Engineering Hall to complete his research. Facilities such as the GWNIC positions GW to be a global leader on implantable device development, he said.

“This is the future, there are so many applications of wearable electronics, implantable electronics. We have the facilities, we’ve made the investment, so we should grow it,” Dr. Efimov said. “We can make a huge impact here at GW.”

Dr. Efimov and a team of researchers announced last year they had developed and tested for the first time in vivo a miniaturized, battery-free pacemaker. The new wirelessly-powered device never needs to be recharged or replaced, allowing for indefinite operation. This research lays out a roadmap for how cardiac implantable devices will be implemented in the future, Dr. Efimov said. 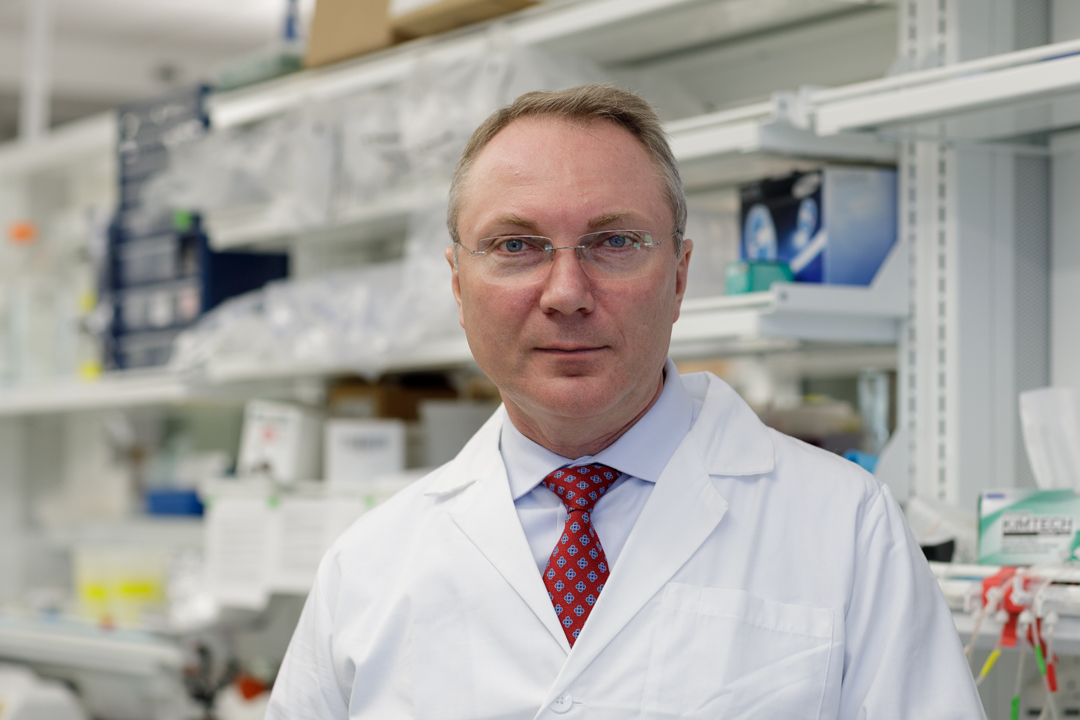 Biomedical Engineering Chair to Be Inducted in National Academy of Inventors