A former CNN correspondent and a panel of media and political analysts discussed the role of media in the U.S. democracy.
October 5, 2022 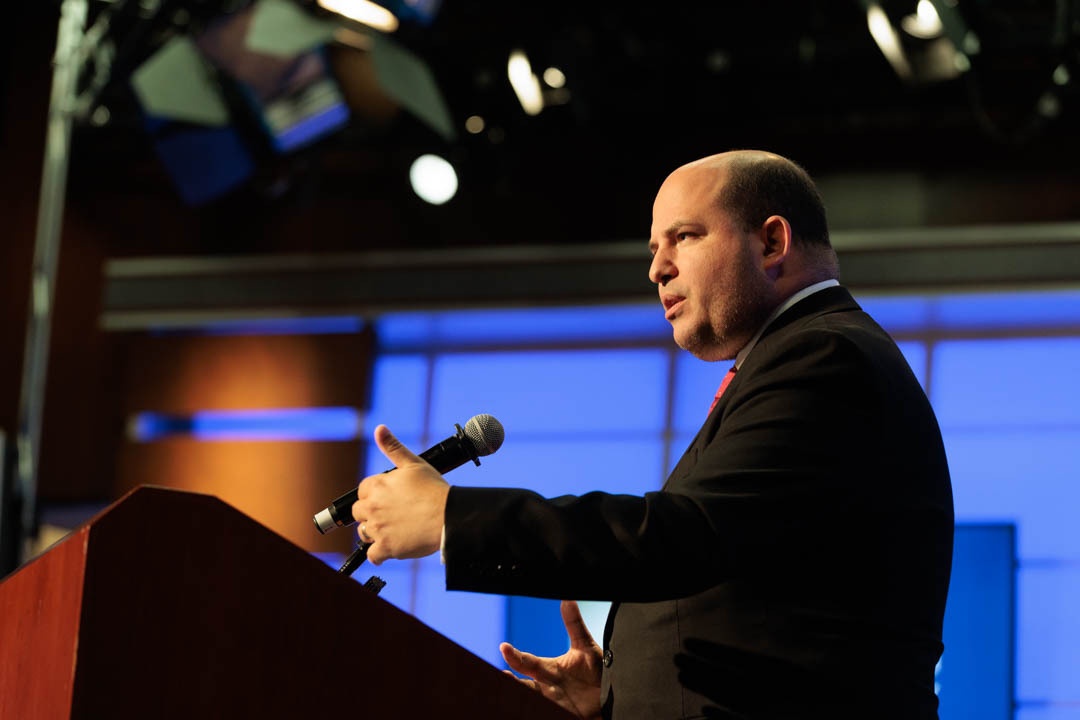 With the midterm elections looming in November, the GW Institute for Data, Democracy & Politics (IDDP) in conjunction with the George Washington University School of Media and Public Affairs and the Election Coverage and Democracy Network held a forum, “Media for Democracy: Covering Elections Amidst Democratic Crisis,” to help journalists and policy makers, according to IDDP Director and SMPA Associate Professor Rebekah Tromble, “rethink what it means to responsibly report on politics, democratic processes.”

“The midterm elections next month are going to be very significant for the nation and arguably, considering the global challenges we are participating in solving, important for the world,” Wrighton said.

Tromble explained that IDDP is looking for ways to support journalists and news managers who seek to responsibly report on American democracy during an era of “high levels of distrust in political institutions, in media institutions.” She introduced the keynote speaker, Brian Stelter, a former CNN political correspondent and the former host of the network’s show “Reliable Sources.”

“The power of the press is real and profound but it is also limited,” Stelter said, describing how the system was undermined in the weeks following the November 2020 elections after then-President Donald Trump declared on Fox News that he had won the election and President Joe Biden had lost.

“It is going to be in our politics…and for many years. That’s the part that we should reckon with,” Stelter said. In response, he said, newsrooms and media outlets have introduced democracy beats “to cover election denialism and the threat it poses in the future.”

He offered several ways the media can regain trust starting with transparency about how media works. “You’ve got to have those graphics and monitors and those Q & A’s to show how the work is done, how the results are found, how [the numbers] are double and triple checked," he said.

“Covering elections in the middle of a democratic crisis really means to cover the voters, the people making the decision and what led to certain beliefs,” he said. “Americans have more in common than they think they do. That gap between what people say in public and say in private is part of the democracy beat story.”

Stelter, currently the Walter Shorenstein Media and Democracy Fellow at the Shorenstein Center on Media, Politics and Public Policy at the Harvard Kennedy School, said the power of the press, though limited, is still consequential if it ensures that the truth as best as can be determined reaches a wide array of people.

“It is up to all of us to hold media accountable for democracy, to hold all the other stakeholders, the ones with frankly more power, the candidates, politicians and elected officials and institutions, accountable,” he said.

Holland started the discussion by asking the panelists, “Why is democracy in a crisis now. Do we think democracy is in a crisis?”

“Yes,” said Mason, who traced the crisis to political party disruptions following the passage of Civil Rights legislation in the 1960s when white southern Democrats and rural Christian conservatives defected to the Republican Party and the Democratic Party became the party of everybody else. “The chaos we are seeing now is organized around our politics,” she said. “We’re not just voting on [issues], we’re voting on what America looks like and what it will look like in the future, issues we can’t compromise on.”

Young built on the idea of politics now being sorted by identity that, she said, is tailor made for “media organizations, cable news, social media algorithms, that have made efficient use of our multi layered political identities…a synergy that is destructive right now.”

Walker said democracy has always been in crisis in the United States and is only now being recognized because of shifting power dynamics to which the media and politicians must pay attention.

“We are not just talking about the people who don’t have power anymore. It is more salient now because they have voices,” Walker said. “How do you cover them? The crisis will always exist because the more you take power from someone, they’re going to fight to keep it.”

On the question of whether democracy is in crisis, Ball said media should think about what we are really asking. “A lot of people think it was a crisis that Donald Trump could be elected and for many Republicans [the election] was a crisis that it was stolen – obviously not true,” she said. “It got a little bit hairy on Jan. 6, but the system held,” Ball said. “I think there is reason to worry because for the first time we did not have a peaceful transfer of power.”