President Obama Will Come to GW for ‘Colbert Report’ Interview 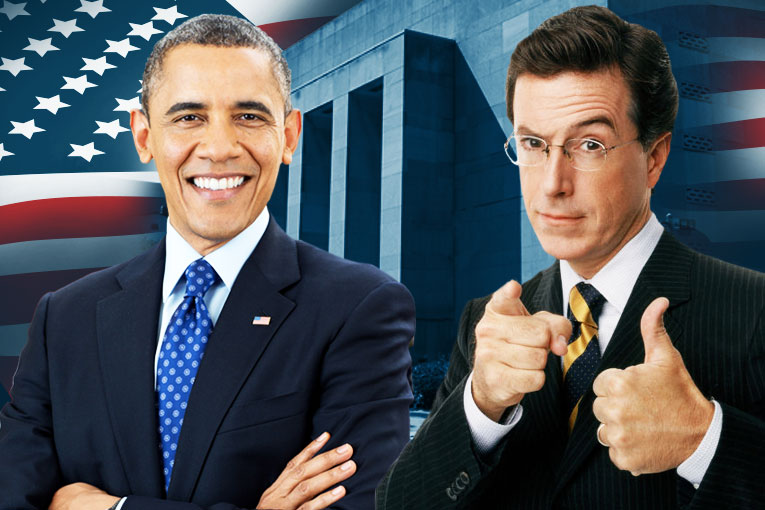 Stephen Colbert, host of Comedy Central’s “The Colbert Report,” announced tonight that he will interview President Barack Obama during a special episode of the show filmed at the George Washington University’s Lisner Auditorium on Monday, Dec. 8.
Shooting the episode “Stephen Colbert Presents: Mr. Colbert Goes to Washington D.C. Ya Later, Legislator: Partisan is Such Sweet Sorrow: A Colbert Victory Lap, ‘014” will mark President Obama’s latest visit to the university. He  spoke at Jack Morton Auditorium in November 2011 to honor World Aids Day, made remarks on fiscal policy on campus in April 2011, held a town hall meeting at the Marvin Center in 2010, attended former Attorney General Eric Holder's installation ceremony at Lisner Auditorium in 2009 and caught a basketball game at the Smith Center.
Students had the opportunity to register for free tickets through a lottery system on Wednesday and Thursday. Registration has now closed. Individuals will be notified before Monday if they won seats to the taping.
Lisner Auditorium hosted Mr. Colbert in 2007, when the satirist discussed his life, career and book, “I Am America (And So Can You!),” with NBC’s Tim Russert.
“Washington has been the Report’s second home, and I will be returning on Monday to show it the same affection the British did in 1812,” Mr. Colbert said.