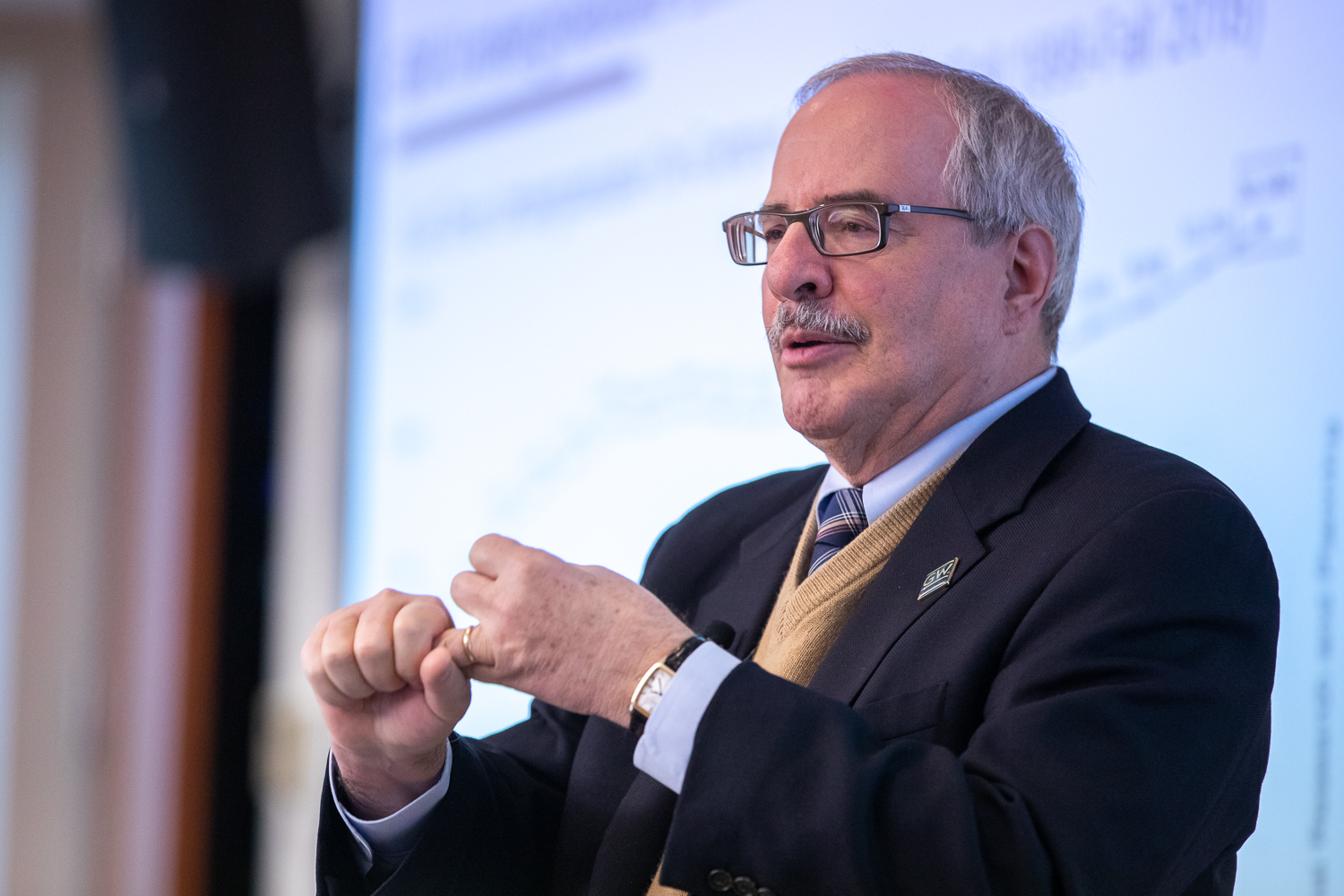 GW President Thomas LeBlanc delivered a presentation to the Faculty Senate on data that influenced the recommendations from the Board of Trustees’ Committee on Strategic Enrollment. (Harrison Jones/ GW Today)

George Washington University President Thomas LeBlanc delivered a presentation Friday to the Faculty Senate highlighting data that influenced the recommendations from the Board of Trustees’ Committee on Strategic Enrollment to reduce the undergraduate population and to increase the percentage of STEM majors over the next five years.

Members of the faculty had requested the presentation during October’s Faculty Assembly.

After the board’s Student Experience Task Force, formed in 2017, examined the student experience and identified opportunities for improvement, the board formed the Committee on Strategic Enrollment in 2018, which spent a year studying hundreds of pages of data and reports, and consulting with GW offices and external experts. On the basis of this analysis, the committee recommended the reduction in undergraduate enrollment and increase in STEM.

“The trustees developed a very good appreciation of just how complicated enrollment management is. But it starts with an understanding of what you’re trying to accomplish,” Dr. LeBlanc said. “The reason the board wanted to study this is because they wanted to understand how we were translating strategic goals for enrollment into specific annual implementations to produce our student body.”

The decision to reduce on-campus undergraduate student enrollment was based on feedback from the GW community, projections of a decline in the number of high school graduates nationally in the coming years and recent enrollment increases.

GW’s undergraduate population swelled by 13.8 percent between 2013 and 2018. This increase has overtaxed the university’s facilities, academic resources and other services. Dr. LeBlanc announced Friday that an initial target for fall 2020 is a class made up of 2,550 first-year students, which includes 2,250 regular fall students and 300 transfer students, bringing the total undergraduate population to 10,100 compared to 10,580 in 2018.

The aggregate financial impact of the reduced fall 2020 first-year class is expected to be less than $3 million, Dr. LeBlanc said.

“The board looked at this and said…we believe that a 20 percent reduction is a proper balance between enhancing the student experience, responding to the demographic changes that are coming and appropriately managing the financial impact,” Dr. LeBlanc said.

Dr. LeBlanc also emphasized the university’s commitment to maintaining the level of diversity in the fall 2020 class as was seen in the fall 2019 class.

The changes to the makeup of GW’s undergraduate student body are expected to be gradual and phased in over the next five years, Dr. LeBlanc said, adding that enrollment management is complex and adjustments are made every year based on many factors. The fall 2019 incoming class was already smaller than previous years to accomodate for previous larger classes.

The university also aims to strengthen its commitment to STEM by increasing the percentage of undergraduate students who complete a STEM major from 19 percent to 30 percent. The number of GW STEM majors has increased organically over the last decade, and a concerted effort to boost STEM would bring GW in line with many other research universities.

The university’s current target is for 26 percent of the fall 2020 first-year class to be enrolled in a STEM major, compared to 23.55 percent in fall 2019, said Dr. LeBlanc.

To provide guidance on implementing the undergraduate and STEM enrollment targets, Provost and Executive Vice President for Academic Affairs M. Brian Blake is forming a committee that will include deans and faculty recommended by the Faculty Senate. The committee will provide recommendations to the High-Quality Undergraduate Education Strategic Planning Committee.

During a question-and-answer session following Dr. LeBlanc’s presentation, faculty emphasized the importance of enrolling an academically strong and diverse student body and mitigating the financial impact of any enrollment changes.

(Read more about the strategic plan or submit feedback.)

Office of the Vice President for Research Updates
Robert Miller, vice president for research, delivered updates on the university’s research ecosystem. OVPR is focused on how to best communicate the important research the GW community is doing with external stakeholders, breaking down information silos that interfere with collaboration, and aligning research programs with the university’s academic mission.

“We want to be really embedded in the matrix of the university in a much more intense fashion,” Dr. Miller said.

In April the faculty-led Research Ecosystem Report was released, which identified several high-priority themes to strengthen GW’s research enterprise. This concluded the first phase of work to review the university’s efforts as part of the research strategic initiative. Dr. Miller reported that 19 of the recommendations from that report have been completed and 47 of them are in process. The university is anticipating recommendations pertaining to core facilities as part of the Ecosystem Review’s second phase.

OVPR has been focused on expanding research resources for students. Enhancements to a university-wide student research event are coming in 2020. The one-day GW Research Showcase will be held on April 7 in the Charles E. Smith Center. The event will have a new outward focus, opening it up to corporate partners and members of the larger D.C. community to see the work being done by GW students, Dr. Miller said.

Cross-disciplinary research is common between the Milken Institute SPH and the School of Medicine and Health Sciences, however, there are also strong collaborations between these schools and investigators in the arts and humanities. Dr. Miller said it’s “encouraging” to see strong bonds across disciplines, and he believes they can be strengthened through strategic action.

Milken Institute School of Public Health Updates
Lynn Goldman, the Michael and Lori Milken Dean of the Milken Institute SPH, delivered an update on the school, which has “made a lot of progress” in its programs, institutes and research enterprise since leadership last presented before Faculty Senate in 2011.

Milken Institute SPH has expanded its academic offerings over the last several years, including a new bachelor’s of science in nutrition, new master’s degrees, the launch of online programs and summer institutes. The school has worked hard to ensure parity between on-campus graduate students and online students, Dr. Goldman said.

“This has been a nice opportunity for us as we moved into the online market, it turns out there is a demand for a master’s of public health online,” Dr. Goldman said.

The school has invested in developing facilities that foster research and collaboration on campus. The school opened the state-of-the-art Genomics Core Center in Science and Engineering Hall in 2018, and the Biostatistics Center’s move to Milken Institute SPH has made the school a hub for collaboration.

The total amount of research revenue generated by Milken Institute SPH has more than doubled since fiscal year 2015. Notably, the school released a report on excess deaths in Puerto Rico due to Hurricane Maria in August 2018, which garnered international attention. The school’s centers and institutes have driven interdisciplinary connectivity across the university, Dr. Goldman said. 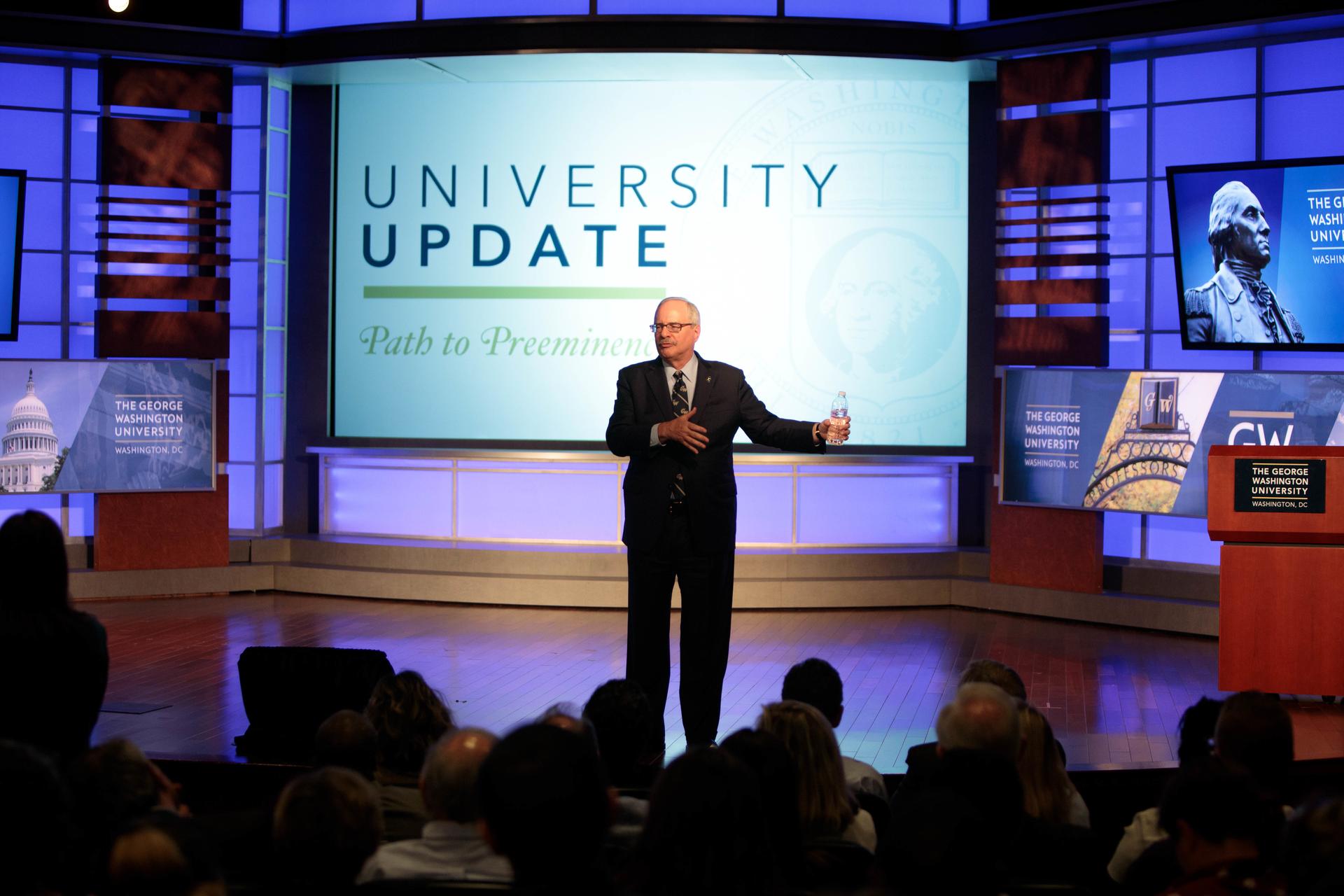 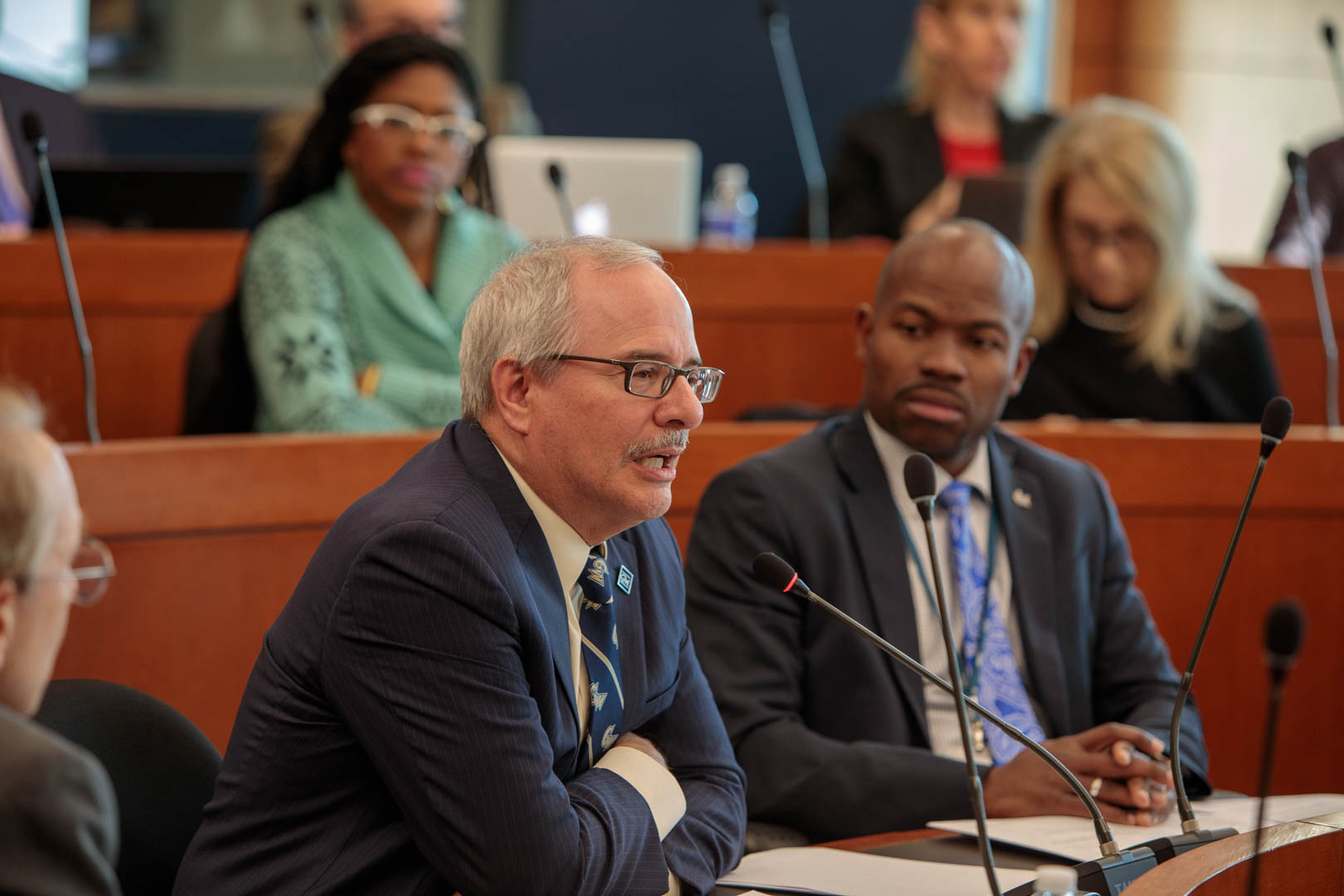 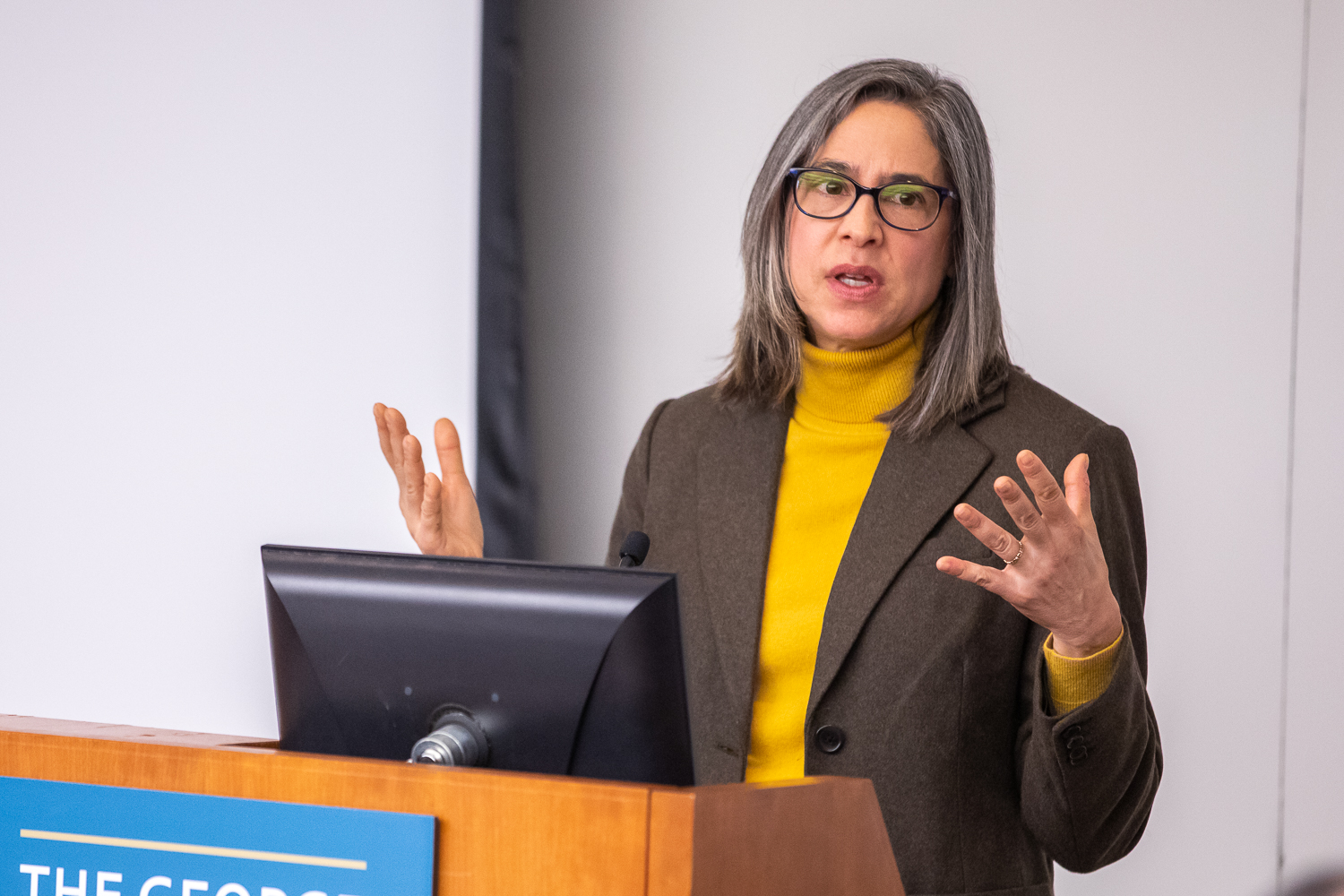