Poseidon—the slender, stainless steel sculpture that adorns the yard in front of the George Washington University’s Milken Institute School of Public Health building—represents a modern link to the myths of ancient Greece.

According to Greek mythology, King Cecrops held a contest between the goddess Athena and Poseidon, the god of the sea. The deity who presented the king with the better gift would become the city's patron. Poseidon, the first to go, struck the Earth with his mighty trident. And from the ground, a fountain of water sprang.

Poseidon lost the contest to Athena, who planted an olive tree. But this climactic moment inspired Greek sculptor George Zongolopoulos to create Poseidon in 1960, when the Greek government launched its own contest to remodel Omonia, the central square in Athens. Mr. Zongolopoulos won the competition with his abstract design. Poseidon would be displayed in the square, surrounded by a circle of water jets. However, Mr. Zongolopoulos never saw his vision come to fruition—the sculpture was never installed, and the artist died 50 years later.

Today, Mr. Zongolopoulos’ 12-foot-tall sculpture, which was installed at GW in July, has been given new life thanks to the George Zongolopoulos Foundation in Athens and the efforts of GW alumnus  George Stathopoulos, J.D. ’60, the curator of the project.

“Zongolopoulos’ Poseidon, after crossing the Mediterranean Sea and the Atlantic Ocean, is standing proudly in the heart of the capital of the world,” said Nicos Theodoridis, the president of the Zongolopoulos Foundation and nephew of Mr. Zongolopoulos. “Today, the sculpture is not in Omonia Square in Athens, but it has been placed in front of a wonderful building, for which they can live together so well.”

Friends and family of Mr. Zongolopoulos and Mr. Stathopoulos, as well as Greek Ambassador Christos Panagopoulos, gathered at the Milken Institute SPH building for the artwork’s dedication ceremony on Wednesday. Now the building and the sculpture—two modern, reflective beauties—are permanently displayed side by side.

Poseidon is the first modern Greek sculpture to be placed on public grounds in Washington, D.C. And it is one of 25 outdoor sculptures on the Foggy Bottom campus.

An art lover and father of two GW alumni, Mr. Stathopoulos wanted his alma mater to house the work of one of Greece’s finest sculptors. Determined to bring Poseidon to GW, he worked closely with the university and the foundation to oversee the donation.

“Being both a Greek and an American, as well as a GW law school graduate, my work with the project has been an opportunity to give back something to the university in recognition and appreciation of my GW legal education,” Mr. Stathopoulos said. “Placing Poseidon in such a prominent place is a wonderful way to promote the cultural heritage of modern Greece.”

Director of University Art Galleries Lenore Miller said Poseidon would become “part of GW’s fabric of history” and that it is a great addition to public sculpture in the District.

“I believe that Poseidon represents the best aspirations of grace and beauty,” Ms. Miller said. 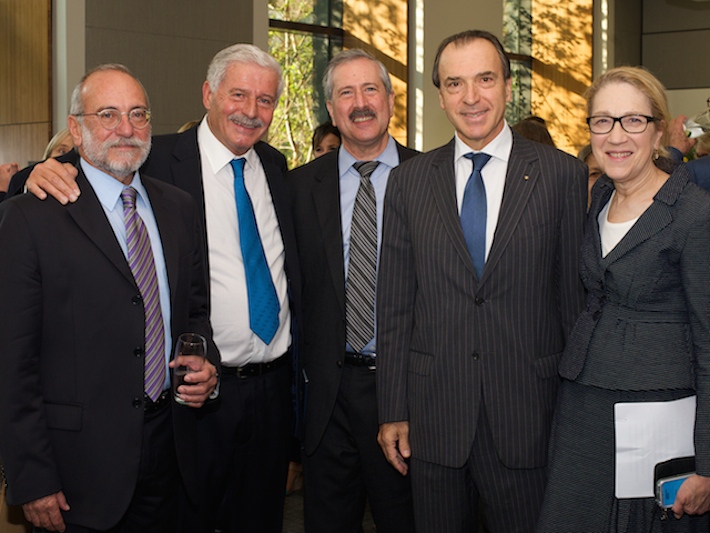