The Plight of the Honeybee

Professor Hartmut Doebel and a team of undergraduates seek answers to why honeybees are disappearing.
June 1, 2015 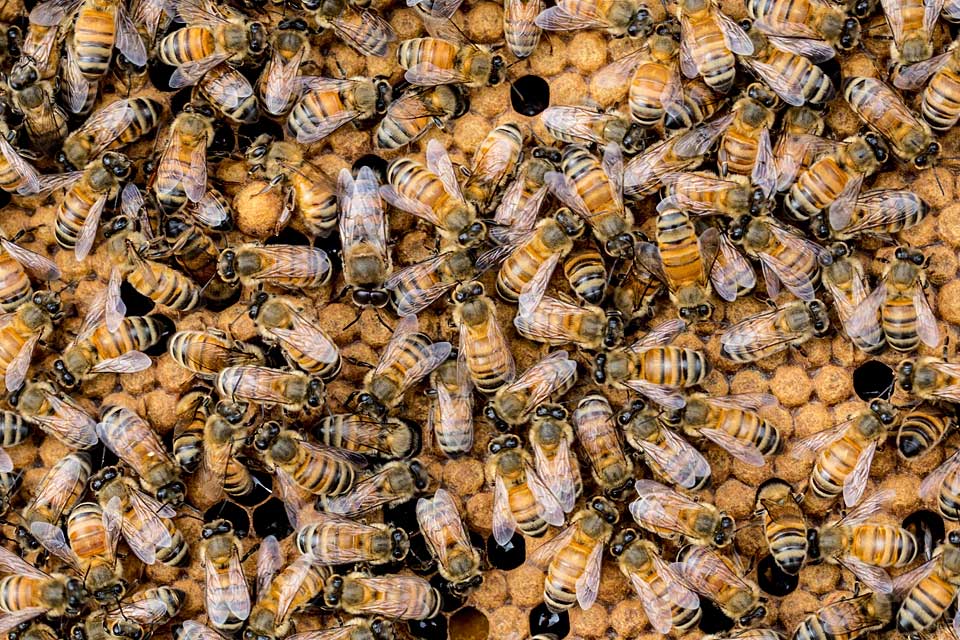 Prof. Hartmut Doebel oversees eight hives on the roof of Lisner Hall, each swarming with as many as 80,000 bees. (Photo: William Atkins)

Where have all the honeybees gone?

The question has baffled scientists for nearly a decade. Around the world, healthy hives that once teemed with tens of thousands of bees are suddenly empty. The colonies have vanished, abandoning their hive homes and ominously never returning. No bee corpses found on the scene. No clues left behind.

“One day, the bees are in the hive; the next, they’re gone,” said Hartmut Doebel, assistant professor of biology and an insect ecologist. “And nobody has a good explanation for how it happened.”

Dubbed Colony Collapse Disorder (CCD), the mysterious malady has claimed 40 percent of the world’s honeybees since it was first identified in 2006. Almost half of the bees in the United States have disappeared in just a decade. Dr. Doebel has witnessed the bizarre phenomenon firsthand. Two of the eight hives he keeps on the rooftop of Lisner Hall have been plagued by CCD, driving away as many as 80,000 bees per hive.

In the 12 months that ended in April 2015, 5,000 beekeepers reported losing about 42 percent of their bee colonies, according to The New York Times.

Scientists fear the honeybee disappearance presents a profound threat to humans’ food supply—along with an undetermined ecological impact. The Department of Agriculture estimates that honeybees pollinate about one-third of the nation’s diet and account for $15 billion in U.S. crop production.

No one has yet tracked down the culprit, but the list of suspects is growing. Are pesticides poisoning the hives? Are bee colonies under attack from lethal viruses spread by insidious Varroa mites? Do genetically modified crops starve bees of life-saving nutrition? Or is a climate-changed ecosystem forcing flowers to blossom too early or shrinking supplies of pollen?

“It’s no exaggeration to say we are facing an environmental crisis,” said senior Ricky Zhu, a biology major and the lead research assistant in Dr. Doebel’s bee lab. “We need to solve this—quick.”

Dr. Doebel and four undergraduate research assistants are on the case. In a three-year student-led study, the biology team is zeroing in on one shady CCD suspect: a class of pesticides called neonicotinoids.

Working with 1,000 bees from Dr. Doebel’s hives, the students are testing the effects of these widely used insecticides on the bees’ behavior and physiology. They are investigating whether the pesticides so severely impair neurological functions that the insects are essentially unable to find food. “If there’s proof that neonicotinoids have an effect on the behavior of honeybees, everybody will wake up and take notice,” Dr. Doebel said.

Most researchers pin the decline in honeybee populations on a combination of factors like pesticides, viruses vectored by mites and environmental shifts. Still, neonicotinoids—insecticides that include imidacloprid and clothianidin—are thought to play such a leading role in bee disappearance that the European Commission recently banned them for two years. Neonicotinoids are the world’s most widely used insecticides and are sprayed on approximately 75 percent of U.S. crop acres. To limit their use would require air-tight studies and irrefutable scientific links, Dr. Doebel said.

Building on their observation of honeybee behavior, Dr. Doebel’s team is taking a deceptively simple approach to connecting the dots between neonicotinoids and CCD.

Foraging honeybees rely on memory to repeatedly locate food patches. They associate a flower with a particular smell, color or even shape. And they learn to return to that same food source again and again.

“They don’t just randomly fly around,” said research assistant Michael Stover, a junior chemistry major. “They know where they are going.”

But, the team theorized, neonicotinoids could damage the bees’ cognitive abilities, affecting their nervous systems and blocking both their foraging and communication capabilities.

In Dr. Doebel’s lab, students trained honeybees to associate certain scents— essential oils like lavender, lemon grass and rosemary—with a reward. Holding the insects in a tiny “bee harness,” they touched a sugar water-coded glass rod to their antennae receptors. At the same time, they used a syringe to release a puff of the oil-scents. Eventually, the bees recognized the scent and expected a treat. Exhibiting a reaction called Proboscis Extension Reflex (PER), the scent caused them to stick out their tongues, even when the sugar water wasn’t present.

The trained bees were then divided into a control and a test group. The test group was fed sugar water mixed with a low-dose of neonicotinoids. Within hours—in some cases just minutes, Mr. Zhu said—the team recorded alterations in the bees’ PER. They would no longer stick out their tongues at the puff of the essential oils.

The bees then entered the team-built “Choice Box,” a 12-by-12 wooden cube separated into two compartments. Using an attached fan, one chamber was scented with the essential oil aromas. The other wasn’t. The control bees, conditioned to associate the smell with a reward, flew into the scented compartment. The neonicotinoid-dosed bees showed no preference for either the scented or unscented sections, indicating that they had already forgotten their olfactory training.

The team is still finalizing results for an upcoming research paper, but Dr. Doebel is encouraged by the findings. “Our preliminary results clearly show evidence that bees, after a short exposure to very low levels of neonicotinoids, alter their behavior,” he said. “They do not remember as well as before.”

“He gives us motivation to create our own innovative projects,” Mr. Zhu said. “We don’t think of [the neonicotinoid experiment] as his project as much as ours. We nurture it. It’s our baby.”

The professor and his students also are eager to dispel the popular perception of honeybees as hostile stinging threats. Dr. Doebel describes the insects as “defensive,” attacking only when they feel threatened. He often amazes his introductory biology students by allowing bees to crawl over his bare hand or perch on the tip of his nose. Mr. Zhu has come to see bees as “pets,” he said, although he concedes he has been stung 39 times, most painfully on the top of his head.

“Handling bees is all about patience and treating them properly. You have to remember you are intruding on their living space,” said junior Mehreen Arif, a double major in biology and English and, like Mr. Zhu, a trained beekeeper. Still, working as a bee lab researcher since last spring, Ms. Arif has been stung at least 10 times, from her neck and ear to the bottom of her feet. “It’s inevitable: You can do everything right and still get stung,” she said. “That’s just a byproduct of science.”