‘A Pivotal Moment’ for Public Health at GW 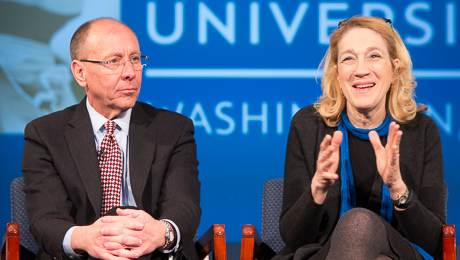 A new era for public health has dawned at the George Washington University.

It may be one of GW’s youngest schools, but with a brand new name, building to call home, and acquisition of the largest monetary gift in university history, the Milken Institute School of Public Health is a force to be reckoned with.

Lynn R. Goldman, the newly endowed Michael and Lori Milken Dean of Public Health, gave a State of the School address in the Jack Morton Auditorium on Tuesday, telling students, faculty and staff that the school's new developments will enable it to advance to the next level as a leader in the field of public health. She said that newly announced resources and a new building will give the school exciting opportunities to “find new collaborations, new ways to learn together and new ways to do research together.”

“We are at a pivotal moment in the school’s history,” added Stacey DiLorenzo, Milken Institute School of Public Health executive director of communications, at Tuesday’s event.  “And we are in a great position to harness this momentum.”

The contributions come from the Milken Institute—which subsequently became the namesake of the school—the Sumner M. Redstone Charitable Foundation and the Milken Family Foundation.

Milken Institute President Paul Irving told Tuesday’s audience that the world faces no challenge more urgent than public health. The Milken Institute School of Public Health is “uniquely positioned” to find solutions to these problems through education, research, policy and practice—and his institute wants to support its mission, he said.

“Washington, D.C., is the center of global public health policy, and GW is the leading public health institution in the capital. We’re four blocks from the White House and a short distance from the most important and influential institutions and agencies in the health world,” he said.

The record-breaking donations will aid in addressing many of the world’s public health challenges, focusing on prevention of disease and promotion of wellness. A gift of $40 million from the Milken Institute will support the school by funding research, academic collaborations and faculty needs. A $30 million donation from the Sumner M. Redstone Charitable Foundation will fund the establishment of the Sumner M. Redstone Global Center for Prevention and Wellness at GW. The center will aim to advance prevention and wellness in the U.S. and globally, focusing on chronic diseases and the global obesity epidemic.

“This is a little different than our other efforts around obesity. It’s not just about our own research, it’s not about treatment of obesity,” Dr. Goldman said. “This is about prevention and establishing a collaborative process that really brings the sciences together.”

“This gift will allow us to attract and retain exceptional talent for our school,” Dr. Goldman said.

Dr. Goldman’s State of School address was an opportunity to reflect on how far the school has progressed in its short 17-year history and to look ahead to the future as it continues to raise its prominence and visibility within Washington, D.C., and the world.

Since Dr. Goldman’s arrival in 2010 the school has increased federally funded research, hired 40 new full-time faculty members, established a variety of organized research units, created new online programs and completed an overhaul of the Master of Public Health core curriculum. Overall enrollment has surged in the past two years—from 150 to 165 current undergraduates, 770 to 933 master’s students, and 26 to 51 doctoral students, Dr. Goldman said.

Tuesday’s event was a chance to celebrate the dedication of the Milken Institute School of Public Health students, faculty and staff, as well university leaders, who were recognized throughout Dr. Goldman’s address. Following the discussion, the audience was invited to a celebratory luncheon hosted by Dr. Knapp, Diane Knapp and Dr. Goldman at the F Street House.

It’s been a historic week for public health at GW, but Senior Associate Dean Josef Reum reminded the audience that the school has been making history all along.