With suicide rates skyrocketing among young African Americans, Psychology professor Sherry Molock is working with churches to address the crisis in communities.
October 6, 2022 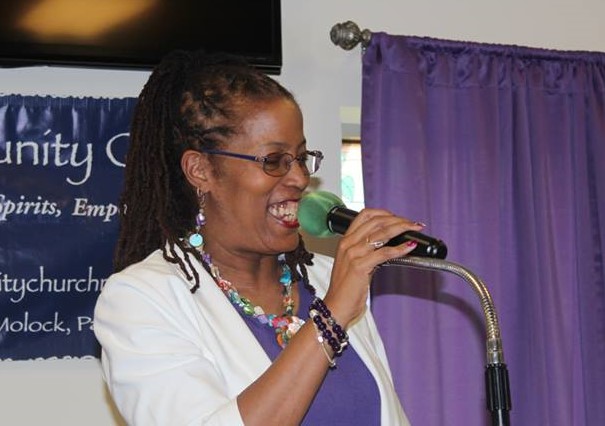 Psychology professor Sherry Molock has served as a pastor at the Beloved Community Church in Maryland for more than 14 years.

As an expert researcher, Sherry Molock, associate professor of clinical psychology at the George Washington University’s Columbian College of Arts and Sciences (CCAS), has studied the impact of depression and trauma on young African Americans who attempt suicide.

And as a pastor at a predominately Black church in Maryland, she’s heard the voices of parishioners in crisis, from mothers whose children have experienced violence to families struggling with mental health challenges.

Now Molock is drawing upon both of those roles—as a scholar and a pastor—for a life-saving project. She’s the co-principal investigator (PI) of an innovative new program integrating churches into suicide-prevention efforts among Black youth.

The project, dubbed “HAVEN: A Multi-Generational Suicide Prevention Program Embedded in African American Churches,” aims to head off a crisis of suicide among African American adolescents by building on deep-rooted connections between churches and communities.

“The church is the most trusted institution in the Black community—and the ideal partner” for delivering HAVEN’s suicide-prevention message, Molock said. “It’s a safe space where people feel respected and cared for.”

After completing a four-site pilot project with funding from the New York State Office of Mental Health, HAVEN will launch a three-year program in 12 New York churches beginning this month. The project is supported by a nearly $1.5 million grant from the American Foundation for Suicide Prevention. The roll-out coincides with October’s National Depression Education and Awareness Month.

“The HAVEN project is unique in focusing on church congregations as a source of strength and support in Black communities, and as key collaborators in efforts to improve health and reduce risk for depression and suicide in youth from those communities,” Howe said, noting that Molock “is unique in being trained as both a clinical research psychologist and as a minister, and so has deep roots in both the scientific and Black church communities, and is bringing both to bear here.”

Molock’s research has long highlighted the sharp rise in suicide rates among Black youth—a nationwide emergency that has largely gone unaddressed, she said. An eye-opening 2019 report by the Congressional Black Caucus warned that suicide rates are increasing faster among Black youth than any other racial or ethnic group. African Americans under 13 are twice as likely to die by suicide than their white peers, the report noted, while a Centers for Disease Control and Prevention study found that suicide attempts rose 73% for all Black adolescents between 1991-2017.

Within her own church—Molock and her husband have been pastors at the Beloved Community Church in suburban Maryland for more than 14 years—Molock has seen young Black people struggle with the impact of depression and trauma. Many of her young parishioners have endured loss in their lives or suffered from repeated exposure to disturbing images like police violence. “Sadly, these traumatic events become part of what young people anticipate as their growing-up experience,” she said.

Past church-centered interventions have addressed issues like HIV-education and breast and prostate cancer awareness. But Molock said HAVEN is the first to employ that model to suicide-prevention. She believes it’s a natural fit, given churches’ influence within many African American communities and their potential to shape cultural norms about mental health and help-seeking. Youth ministers in particular, she said, often play a central role in the lives of young people, whether or not they are members of the church.

“If you don’t have a good support system at home, the youth minister may be the person who shows up at your graduation or your 18th birthday party. The minister might be the person who teaches you how to drive a car or even goes to your parent-teacher conferences,” Molock said.

Working within the churches’ existing community engagement pathways, the researchers help church leaders design a faith-based educational curriculum that incorporates suicide-prevention messages into sermons, Bible study groups and Sunday school lessons. The project also includes a series of 90-minute interactive modules created by co-PI Wyman as bond-building exercises to promote resilience strategies, adaptive coping and help-seeking acceptance. Churches can tailor the specifics to their own needs and resources, with some pastors adding features like podcasts.

HAVEN is also among the first programs to target structural racism as both a suicide risk factor and a roadblock to intervention efforts, Molock said. Indeed, some pilots were paused following traumatizing events, allowing the researchers to adjust the curriculum in the wake of violence within communities and the emotional fallout from the school shooting in Uvalde, Texas.

As the program expands, Molock said her team will revisit churches to address their needs and bolster their resources. Meanwhile, she’s been inspired by the commitment from church leaders and communities to reach out to youth in crisis.

“They may not know exactly what to do about these rising mental health challenges, but they clearly, deeply love these young people,” she said, “and they are hungry for ways to help.”