Experts on global economics and diplomacy spoke at GW about the impact of China’s massive economy.
July 20, 2018 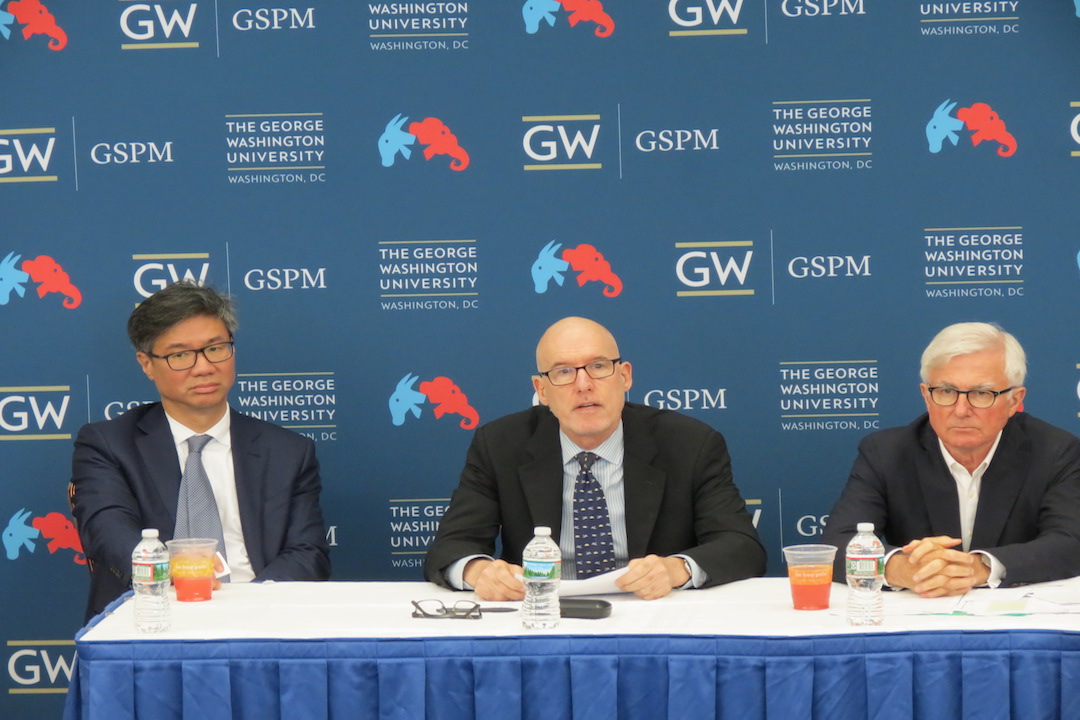 Multinational corporations in America, Europe and Japan have found that China has not been playing fair, said David Woo, head of global interest rates and currencies research at Bank of America.

“Many businesses would rather they didn't have to do business with China, but they have no choice because it's the second largest economy in the world,” he said.

Mr. Woo said since it opened its markets, China has forced international firms to transfer technology to their Chinese business partners. A report from the Commission on the Theft of American Intellectual Property estimates the annual cost of intellectual property loss for U.S. firms at up to $600 billion.

Mr. Woo and New Zealand Ambassador to the United States Tim Groser spoke about how countries are preparing for a strengthening China and how existing international economic and political institutions and norms can be protected at George Washington University on Wednesday. The event was hosted by GW’s Graduate School of Political Management (GSPM) and moderated by GW Law Professor Donald C. Clarke, who also is a Chinese law specialist.

The drastic growth of the Chinese economy in the past two decades has left some of the international community dismayed as the Asian nation amasses the world’s largest stock of foreign currency, accelerates the of building its military, expands into the South China Sea and increasingly encroaches into diplomatic affairs abroad.

While some see opportunity in the economic and diplomatic rise of China, others see it as a threat.

Now, with a pending trade dispute with the United States, growing national debt and a slowed growth rate in its economy, Mr. Woo said China must act quickly.

“China has grown by basically giving a lot of loans to everybody who wants to borrow, and that has come to an end,” he said. “China has not figured out how else to grow, and I think that is going to be the biggest issue that China is facing."

Earlier this month, President Donald Trump imposed tariffs on $34 billion worth of Chinese products. China responded with similar sized tariffs on U.S. products.  Mr. Trump is expected to enact another $16 billion in tariffs against China by the end of the month.

While the trade war makes things uncertain, the international community should not expect a grinding halt to growth in the Chinese economy anytime soon, Mr. Groser said.

“I have been participating in seminars on China for about 30 years, and I have never participated in a seminar in which some expert hasn't predicted the immediate collapse of the Chinese economic model,” he said, “and it hasn't happened.”

He also noted that China has made shifts in its economic model to keep it stable, such as cutting its dependence on exports to nearly half in the last decade.

“The Chinese, up to now, have shown the capacity to make some adjustments that are necessary to keep growing at a fast, but declining rate,” he said. “To say that China is becoming a superpower would be true.”

When asked whether the global community should have concerns about China seeking to influence international affairs, Mr. Groser said it is normal for any country, including China, to want to broaden its influence on a wider network of issues they have interests in.

“I don't see China as some fundamentally expansionist power seeking to destroy the system that we're operating within largely. What I see is ambiguity” he said. “"I think there's an unresolved issue about whether China is setting its own agenda or is still prepared to follow the largely U.S.-led, up until recently, liberal international rule-based system.”

He said there is not a country that the United States or New Zealand has diplomatic relations with “where there is not something we can't gripe about.” However, Mr. Groser said he did not see an immediate or obvious threat in the nature of Chinese international affairs.

In her opening remarks, GSPM Director Lara M. Brown said the school has been doing more work to train students beyond domestic politics and show them how global politics matter.

The school’s Global Residencies Program offers short-term study abroad courses that take students to international cities on the forefront of global politics and business. The program has offered residencies in South Africa and Washington, D.C., and will soon offer courses in Canada, Berlin and London.

"Next June, we will actually be going to China,” said Dr. Brown. “So, this was part of our preparation as a school— to want to bring some experts on the Asia-Pacific region and really have an understanding of how our politics are engaged with that area of the world." 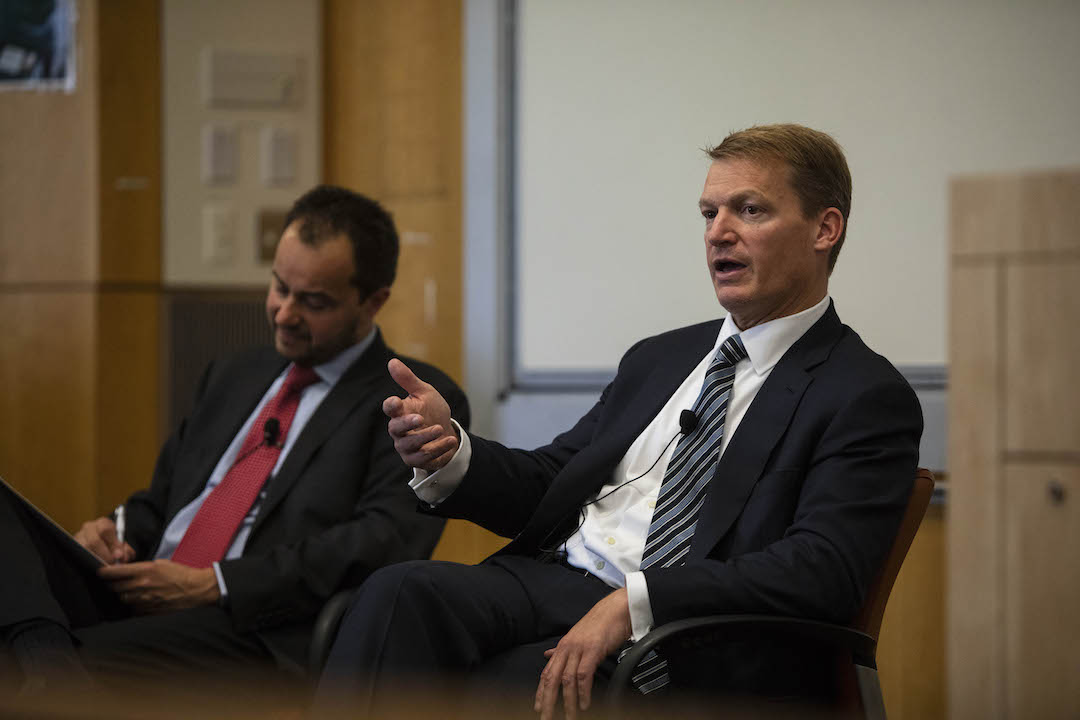 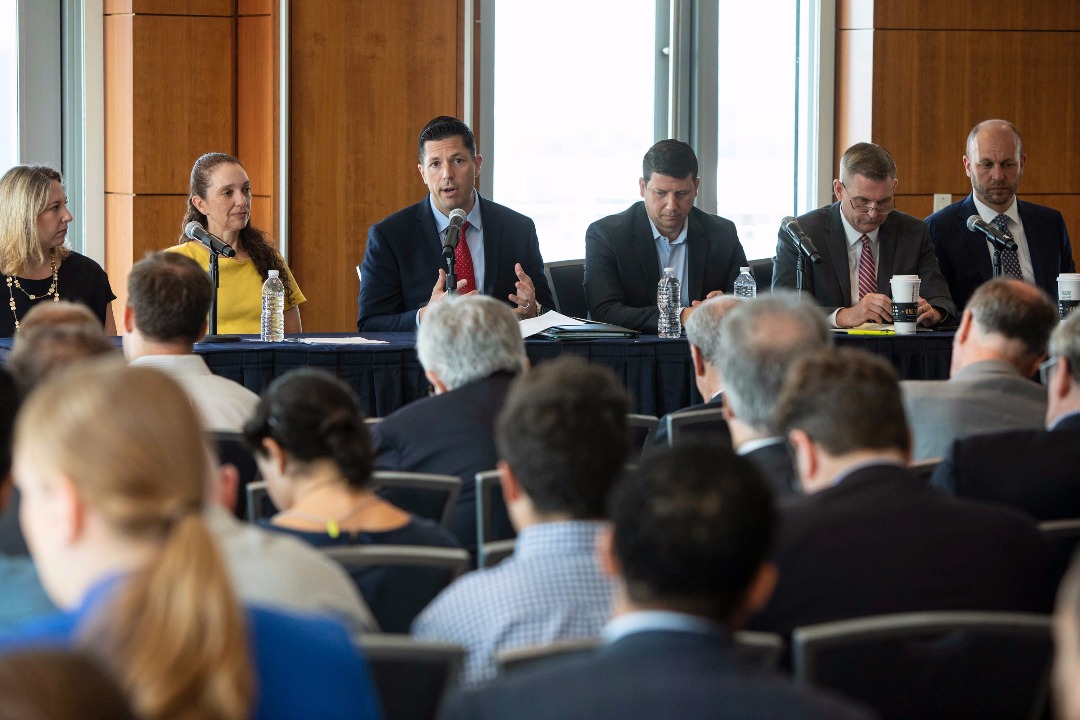