Justin Fisher said he was surprised by how similar North Korean and GW students are.
July 23, 2012 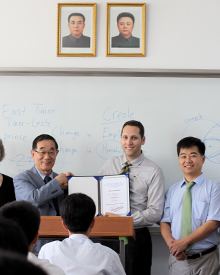 Pyongyang University of Science and Technology President James Kim, left, presents GW Lecturer Justin Fisher with a certificate to thank him for his participation in the Pyongyang Summer Institute program.

After spending a week in North Korea as part of a Statistics Without Borders program, George Washington Elliott School of International Affairs Lecturer Justin Fisher is sure his summer students now have a better understanding of survey sampling, computer analysis and how (some) Americans greet each other.

“They were quick to pick up the fist bump,” said Mr. Fisher, who taught it to students one day over lunch. “They probably think Americans greet each other like that all the time!”

Mr. Fisher, B.A./B.S. ’97, was one of 13 professors who recently taught a combined seven courses for the Pyongyang Summer Institute (PSI) in survey science and quantitative methodology in North Korea. PSI is an international teaching program at the Pyongyang University of Science and Technology (PUST).

In the mornings, Mr. Fisher, who is also a senior statistician at the U.S. Government Accountability Office, led a survey sampling class and, in the afternoons, he taught computer analysis. He said that, although he didn’t initially know what to expect from his students, he found commonalities with GW students, and they were friendly, eager and curious about Americans “despite the usual rhetoric between the U.S. and North Korea.”

“My biggest surprise was how similar the students were to those at GW: just a group of kids working hard to understand the material and get good grades to secure the best job for their future,” Mr. Fisher said.

Still, one challenge was rethinking the examples Mr. Fisher used in class. Though he still pulled from applicable topics like the social sciences, education and public health, Mr. Fisher left the politics out.

“At GW, given our D.C. location, I often use political polling as an example in the classroom. In North Korea, discussion of politics was frowned upon, so I leaned a little more on agricultural data than when I teach in D.C.,” he said.

Outside of teaching, Mr. Fisher said he was able to see at least some of the major sites of Pyongyang—and even rode the metro for a stop—but “the logistics of getting off campus are not trivial,” he said. “You can’t simply walk to the street and catch a bus.”

Statistics Without Borders trips like this one are fitting for Mr. Fisher, as he has lived overseas and worked for the United Nations. In 2010, he traveled to Haiti to help with a survey after the massive earthquake that devastated the country. Now, he serves on the Statistics Without Borders’ new projects committee and will take over as the organization’s chair in August.

Mr. Fisher said the program will continue next year. (PUST, which facilitated the visa process for the professors from Europe, the Middle East, U.S. and Australia, has a good relationship with local officials. An instructor with a South Korean passport was denied, however.) Organizers would like to double the number of courses offered.